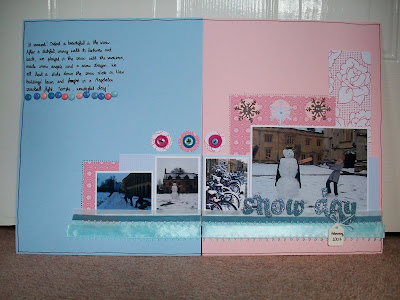 This is another of my LOs from the class I went to on Saturday run by Eclectic Keepsakes and led by Shimelle. I found it quite strange to morph someone else's style into my pages as starting with a design by Shimelle means you jump off straight away with another scrapper's ideas and placement. This isn't a bad thing! I normally stick to single pages, I have never scrapped in this size before and I don't often go for big blocks of patterned paper like this. But that's all first stage crapping stuff and it was fantastic to have a go at something different, especially with the added support of a class to motivate.
Mine didn't follow the design properly, partly because I wanted to move things around a little and bring all the photos together and partly because my photos weren't the right size to begin with. This being Not In Any Way My Fault as my beloved dinky photo printer chewed up an entire 50-print cassette of photo paper and ink for no reason. It wouldn't come out or do anything or respond and having downloaded the instructions twice (once in Spanish by accident) and finding no advice to the contrary, I opened it up and pulled the thing out with my bare hands.
Mistake.
It turns out that they call them cassettes for a reason. There was a long plastic ribbon entwined in the intestines of the machine that grew as I pulled. Just like when a tape player takes a big mouthful of cassette ribbon and refuses to let go.
I won eventually and although I managed to save the printer, I lost the cassette and so was only able to print dinky pictures. The large one in this LO was one I found in the cupboard.
Anyway, once I got to stage 2 scrapping, ie. the ribbons and embellishments and journalling and all that jazz, it started to look my like me again and I really like the result. The only thing I'm not convinced about is the 2-tone background. All my other doubles have the same background colour and I think I prefer them like that.
All-in-all however, I'm satisfied and I will use this arrangement again.
Kisses xxx
P.S. For another time, how being made the maths department point-man on Oxbridge is taking over my life.
Posted by Miss Smith at 21:25