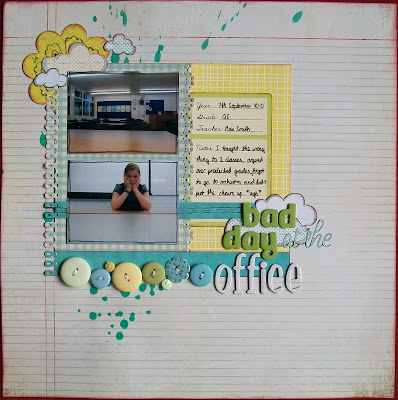 This is my page for yesterday: Bad Day at the Office. Glad that one's over even though it did turn out alright in the end!
I arrived at school this morning to find the school cat in the maths office. The school cat is not the brightest of creatures and seems to possess no distinguishing character traits of the common or garden cat. For example, it followed me out of the office, down the corridor, round the corner and outside as I beckoned and spouted forth the most dreadful baby talk. Cats are supposed to look at you in disgust and walk the other way. Anyway, I shut the door in its face.
Ten minutes later, I found it sitting on the teachers desk in one of the maths classroom. I repeated my trick. It's an incredibly daft, soft sort of animal, but it more than tolerates the boys who treat it with a great deal of affection. Unless it accidently gets in the way of a goal.
And one of my lessons for the day was: A little help goes a long way.
Today it was wall display day: Part one. Part one involves ripping down the old wall display and putting up backing paper. The actual display comes next week. However, unless you have good backing, the display is going nowhere.
I enlisted (read: bribed) my form to help me. So at lunch time, a surprising dozen boys showed up to help. Clearly the bribe offered was too large. I explained that they needed to tear everything off the wall while I went to fetch the staple gun (NO YOU MAY NOT USE IT)and the new backing paper. I was gone for perhaps 30 seconds while unearthly shrieks echoed down the hallway.
When I went into the classroom, they were standing around in shreds of paper with enormous grins on their faces and the wall was absolutely stripped bare. I've never seen anything like it, except perhaps when Mr Attenborough shows us all what a piranha attack looks like.
They less enthusiastic about putting the backing paper up (DON'T TOUCH THE STAPLE GUN). Their assistance consisted mainly of eating their sandwiches and pointing out slight blemishes.
Still, it's all done, and I am really enjoying having a form. It's extra work but I think I've mainly worked out how and when to fit it in. They are a crazy, noisy, over-excited handful. But an extremely entertaining one!
Kisses xxx
P.S. I am TOTALLY going to the Last Night of the Proms. Will be setting off nice and early on Saturday morning to go and queue for my ticket. Bring it on!
Posted by Miss Smith at 18:43