My First Time in London 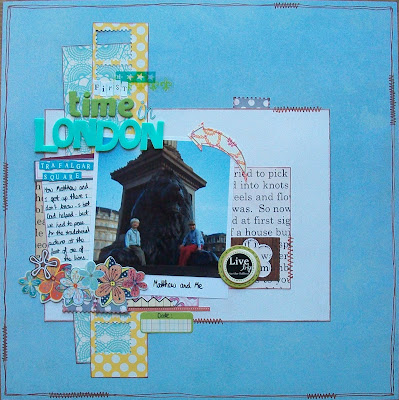 Rooting through the box of old photos, I found this picture of my brother and I sitting up with one of the Trafalgar Square lions. I can't manage to get up there by myself, and given that I was much shorter then, I assume Dad gave us a helping hand! I think this was when I was around 7 or 8, which would make it 1996. Perhaps. I will find out and add the date!
This was our very first trip to London (it was a long way from Yorkshire) and I only have hazy memories. I do remember going to see Starlight Express but that's pretty much it. We must have taken an open top bus tour and visited Trafalgar Square and Buck House. These are the places that I took pictures! Most of the film that came off this disposable camera are wonky shots of Nelson's column with bits of bus or people's heads in the way. Mum must have taken this one as it's basically the only decent shot!
I might be fin to scrap this others in a "This is how I used to take photos" kind of way. When we were little Mum and Dad used to buy us one disposable camera each for a holiday and I remember thinking that you had to choose very carefully what you were going to take photos of, as once you'd run out, that was it. 25 exposures for a week doesn't seem like very much when you're seven.
I also remember that you could only take pictures of things that were over 1.5 metres away and you had to be outside or the pictures were just dark and grainy.
It's amazing to think how far photography has come since then.
Kisses xxx
P.S. And now I'm going retro - I just invested in a Diana camera... More on that another time!
Posted by Miss Smith at 11:30