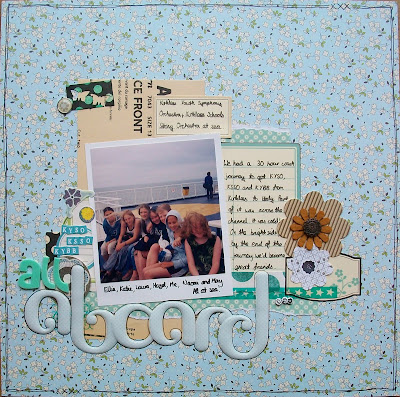 A few things have turned up in the move and one of those things was a box of photos that I organised when I was in the 6th form. I did scrap then but not in the 12x12 sense of the word - I stuck photos into a notebook and cut letters from newspapers and magazines and bought A4 paper from stationary shops. How times have changed!
This picture was a trip I made one summer holiday between high school and sixth form of me and some friends from the orchestra on our way to our Italy tour. It was the first trip abroad the orchestra had taken in about 20 years and it was amazing. I didn't know anyone that well until after this trip. Yorkshire to Italy by coach takes about 30 hours which is a lot of getting-to-know-you time and we were firm friends by the time we arrived. I wrote an account of the trip for the local paper which I will dig out and put on another page with some of the other pictures.
I've not really scrapped any photos that are older and I felt excited and inspired by the idea of scrapping them! I think I'm going to turn lots into Polaroid style pictures as I prefer a white boarder, and as these photos were taken when I had a film camera, I can't print them as I like. What I do have is a box of carefully organsied photos in matching lilac envolopes labelled with the place and date. I like to think of 17-year-old me, completely unaware of what my scrapbook would become and where I would be, six years later, sorting through this box of memories as I make my first new ones in my own place.
Good nostalgia.
Kisses xxx
Posted by Miss Smith at 11:37