Storytelling Sunday: Variation on a theme of a cup of tea.

Some stories are silly. This one certainly is. And yet, at the same time, it says a lot about me and my friend Liz. Liz is a writer. When she left uni she started a magazine called Oh Comely and she writes. Actually she does an awful lot of other things too, but the story I want to share today, as part of Sian's Storytelling Sunday is a story of me, and her, and our friendship. But it's not a story by me. It's a story by her. It's about tea, sort of. And it goes like this... 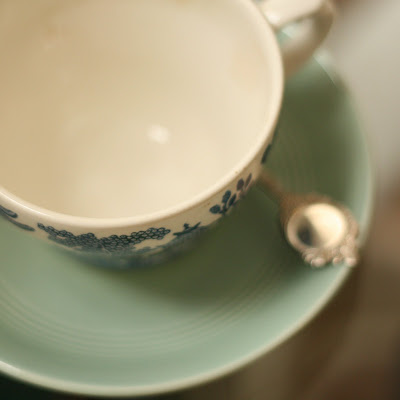 "One morning, I sat in my room, blindfolded, and tasted one cup of tea after another. Six cups in all. It's not helpful to remember how lovely that room was, but it's hard not to: wide windows, views of trees and a stream, high ceilings. It was my third year of university; important things were afoot. But here I was, sipping tea in my overly-nice room and deciding whether I thought the tea bag had been squeezed or not. It was the last act in my longest-ever argument.

Tea-drinking is like any other drinking in that you seek out a companion with boundless enthusiasm. Kirsty never refused a cuppa. Our drinking at times became distinctly unhealthy. We would drink so much that we'd be vaguely juddery from the caffeine and lie around feeling bloated. Every now and then we'd comment on the noise the tea was making sloshing around in our stomachs, and then get up and put the kettle on. We went to the bathroom constantly. It was mildly obscene.

So in many ways, it was perfect. We drank tea every time we saw each other. We drank it alongside trays of pasta bake and cheery TV dramas. We drank tea to dilute the pain of our studies, which were not as much fun as we'd hoped. But something bothered me: Kirsty squeezed the tea bags. What was worse was that she flatly refused to admit that it made a difference to the taste. Our feud followed us quietly through the terms. It survived almost three years of listless studying and six seasons of Gilmore Girls.

Until that moment. There were three pairs of tea to taste. One cup of each had been left to brew, with the other Kirsty had carefully mashed the tea bag just as she always did. I got it right, of course. She didn't believe me, of course. She declared that the result not statistically significant. I was not the mathematician, so there was nothing I could say. But I knew I was right: I hadn't got it right by chance, I got it right because I knew which was which. The squeezed tea bag tasted acrid and a little bit dreggy, just as I knew it would.

There are plenty of other things to get angry about with tea, of course: too much milk, an underbrewed cup, tea bags left floating in the bottom like jellyfish full of tannin. But with tea bag-mashing, it's not just the bad taste. There's also something so unnecessary about it. It's always deliberate. There is no half-mashed middle: people either look insulted or utterly bewildered when you ask them not to mash your tea bag.

Some people say that a cup of tea is a tiny gesture of kindness in a hard world. It is true that I find it slightly sweet when someone makes a me cuppa. It makes the world seem softer and gives you something warm to wrap your hands around. That's always nice, especially when it's cold. On days when everything threatens to descend into chaos, a cup of tea makes me feel a little more loved. But only if someone didn't squeeze the tea bag."

The pedant in me is obliged to reiterate that this test is not statistically significant which is a maths way of saying the chances of her guessing right by accident were too big, one in eight, and no self-respecting mathematician is going to accept a significance level of 12.5%. Duh! Plus, once you've made the tea, in the cup with the teabag floating in it, it's common sense to whip out the teabag and squeeze that excellent tea-loveliness back into the cup. And it makes NO DIFFERENCE to the flavour.

I love that this story has 2 totally different perspectives and that I can scrap these, hers and mine, as a little part of my life history. If you know someone with a talent for the written word, get them to write you a story and find out what they really think!

P.S. Have loads to share as spent the day yesterday at GoGo To You, a ScrapaGoGo day event and crop where I met some lovely ladies who came to crop with us for the day, took some fab classes and I got to teach my very first class! Pages forthcoming.

P.P.S. How FANTASTIC was Doctor Who?

Email ThisBlogThis!Share to TwitterShare to FacebookShare to Pinterest
Labels: Story-to-scrap