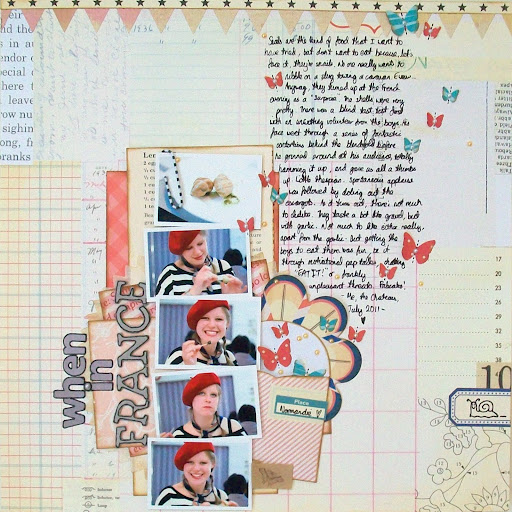 I think I've kind of wanted to try snails in my head but never actually made an effort to eat them before because, let's face it, they're snails. It's one thing to want to have had them and quite another to actually want to nibble on a slug with a caravan. Ew. Anyway, they turned up at the French evening as a "Suprise" course. The shells were very pretty. There was a blind taste test first with an unwitting volunteer from among the boys. His face went through a series of fantastic contortions behind his blindfold before he grinned around at his audience, totally hamming it up, and gave everyone a thumbs up. The applause was spontaneous, and we started dishing out the snails to the rest. It turns out with snails that there's not much to dislike. The taste a bit like gravel but with garlic. Not much to like either if I'm honest. The most fun was getting the boys to eat them, be it through motivational pep-talks, chanting "EAT IT!" or via the medium of some, frankly unpleasant, threats. Fabcakes.

One of my colleagues was kind enough to snap this series of pictures of my own snailey experience. To embellish, I used a little envelope and scattered butterflies and sticky pearl around the page, tumbling from it. It's a great effect that I'd definitely use again.

And the background sheet? It's by Sassafras from their starters line and is my new favourite paper ever :D

P.S. A week left to sign up for the giveaway challenge!
Posted by Miss Smith at 13:16