Welcome!  If you're here on your way along the organisation blog hop, you should have arrived via the fabulous Rinda's blog.  And if you're not on the hop, then why not check it out?  You can find more details at the end of this post, and over on the lovely Jennifer's blog where loads of exciting things are going on celebrating all things organised.  And just to whet your appetite, there's a giveaway too :D

Organising my stash has never been my strong point.  I'm almost sure it never will be.  But I'm OK with that, and so as part of the Organisation blog hop, I'm going to share why. In my job, at work and indeed, in life, I am a list fan.  I'm a died-in-the-wool Filofax girl with a schedule and a routine and things that I can tick off when I'm done.  I keep things tidy, well organised and, frequently, labelled.

This is not how I scrapbook. If my flat looks cluttered, it's because my stash is all over it.  On the coffee table, the kitchen table, shelves... and large areas of the floor are also given over to works in progress.  I sit on the sofa to eat or do my marking from school.  When friends come round for dinner, they largely sit on the sofa to eat too.  Sometimes I will clean off the coffee table, but they are now resigned to the fact that they won't be sitting at the kitchen table.  I'm not moving my stuff.

It's not organised or labelled.  It lives in boxes with no rhyme or reason and it's everywhere.  And you know what?  I LIKE it like that.  When it's spread out, I can see my stash and tinker about with it, shuffle bits and pieces round.  It inspires me and it's always good to go. This page was made almost exclusively from bits and pieces left on the table.  I wouldn't have included a little piece of lace, a border offcut, a slip of leftover banner or a fabric yo-yo if they hadn't just been there.  And the world's cutest, smiley washi tape would not have got a look in.  It wouldn't have occurred to me.  Without the odds and ends, I find it hard to see the bigger picture.  I don't need a craft room.  I have a craft flat.  A disorganised craft flat.  And I make not apology for this.

So, back to the hop.  Each blog along the way has a letter for you to collect. Once you've got them all, and reached the end of the hop, you can email Jennifer the phrase you've collected. All entries must be received by Monday the 2nd of July at 11.59pm BST, and all the correct answers will be put into a draw to win a gorgeous prize package of October Afternoon 9 to 5 and Studio Calico Take Note items, worth over £25. 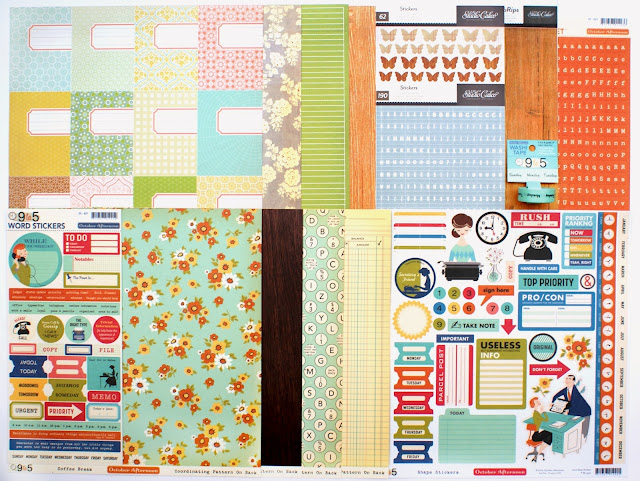 See?  It really is cool :D For some more organising inspiration, you can continue on the blog hop to Daphne's lovely blog Eeep, it's been a while.  Hello blog!

So I haven't done much in the way of scrappy things of late.  I don't know where the time goes!  Or, more accurately, I know exactly where it goes, but there isn't enough of it.  But I have made this page which will also be joining the ranks of the Guiding pages.  It tells of my first camp as a leader. I was so excited to go on my first camp as a Guider.  Actually, I got lost on the way, but otherwise, it was perfect.  The sun was out, we had the whole of Cherry's camping site to ourselves, the girls were constantly laughing....

Except in the middle of the night when they complained about the Australian red ants in their tents.  This being obvs not true.  It was moths outside their tents that were attracted to the light their torches made.  We had these massive tents that were too heavy for the Guides to put up so we "helped".  ie. did it for them.  Each tent had a central area big enough to stand up in and a little pod each side that would sleep four girls.  Although on the Saturday morning, we found all 8 girls from one tent curled up together in one pod.  They said they were cold, which they might have been, but the masses of sweets surrounding them told a different story.  But as we all know, Guiding, and especially camp, is about having as much food as you possibly can and then making sure any activities in between food involve eating in some way, or use up enough energy to facilitate more eating.  It's basically the rules. P.S. Speaking of really hard work, had a lovely exciting big promotion at work!  But that means lots more to do.  However, I get my own office to do it in.  Thinking of turning it into a craft room as technically, no one has forbidden me to do this.  I think they're just assuming I won't.