one photo and twenty words 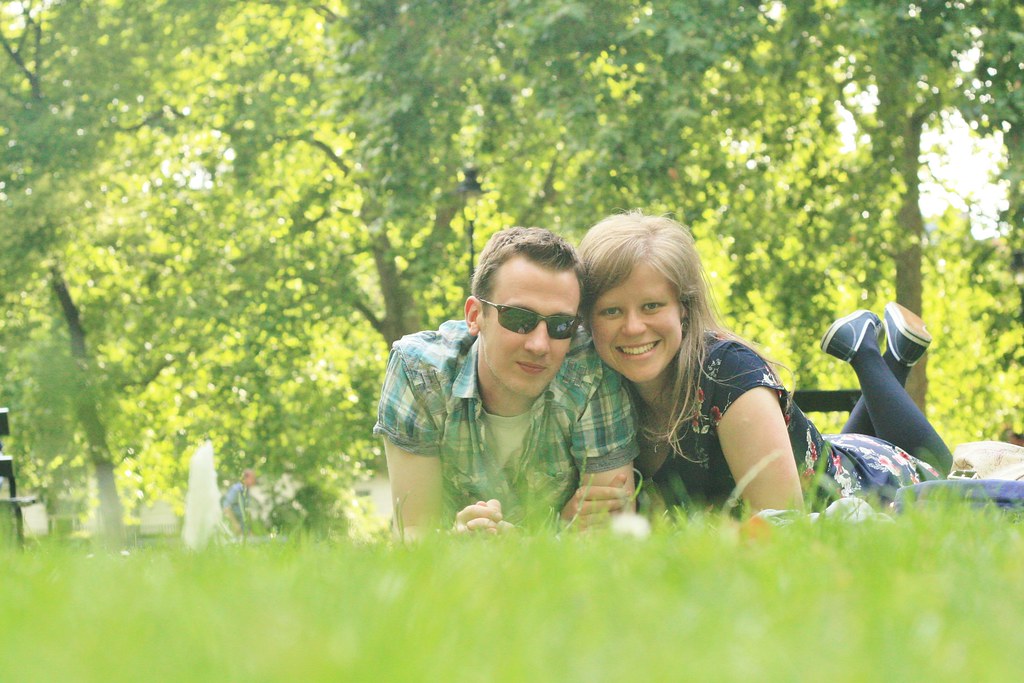 This took three goes; grass got in the way, dresses are impractical for scrambling around. We laughed; I love it.

I'm actually going to cheat a little bit.  I won't say any more about this picture, but I do want to write a few thoughts down about the day.  I took this on Friday.  A special and lovely day because we both had the day off work.


We put our heads together to come up with plan.  He suggested going to the cinema during the day so we could have the screen to ourselves and sit wherever we liked.  I quickly concurred and added that I also believed brunch to be an essential component of a day off.

Brunch was delicious: a flour tortilla topped with fried eggs, chorizo, melted cheese, avocado salsa, black beans and sweetcorn.  Plus some potato wedges, because YUM. We were able to sit outside in the sunshine and watch the world go by before heading off to catch The Edge of Tomorrow.  We had the entire theatre to ourselves...until another couple arrived.  I scowled, grumbling that it was extremely rude of them to interrupt our private viewing. But as they came up the steps, they waved cheerfully, and called to us, “We’ve come to ruin your sceening! And we’re going to sit right next to you even though the whole place is free!”  Safe to say they didn't and we grinned back and decided that they were clearly very nice and that they could stay. The film was appropriately silly and hugely entertaining and had aliens and time travel and robot battle suits and the odd gag and we enjoyed it a lot.  Even with the plot holes.

We left the cinema in search of Pimm’s and having walked past 3 underground stations and being still unable to locate that most British of summer beverages, we hopped on a tube to Russel Square, imbibed a Pimm’s each outside a pub and then spent a blissful afternoon lazing on the grass in Russel Square garden.

One Photo and Twenty Words is hosted by Abi over at Creating Paper Dreams. Pay her a visit (she's brilliant!) and see others' pictures.

Email ThisBlogThis!Share to TwitterShare to FacebookShare to Pinterest
Labels: 500 snaps of summer, One Photo and Twenty Words