Dinner with the Gang at Dishoom 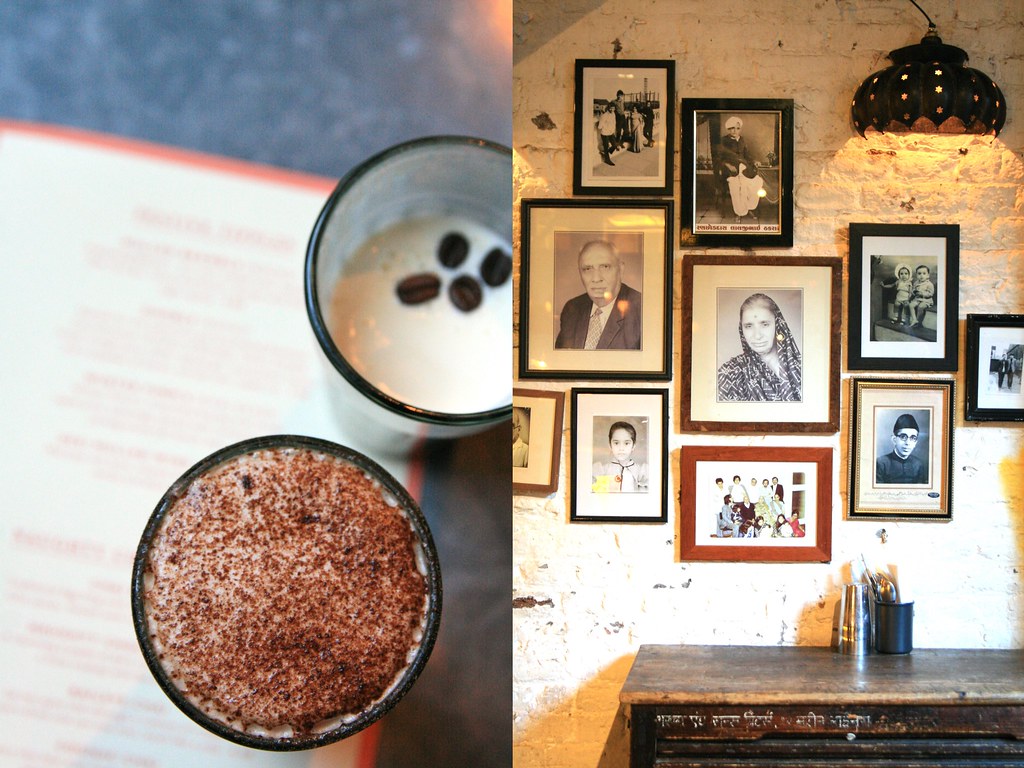 Naturally it makes sense on a cold day to start lunch with a hot chocolate, and if you're in an Indian restaurant, it of course ought to be chocolate chai, redolent with aromatic cinnamon and cardomom.  And if it's Christmas as well as all of the above, you'd better make it a Naughty Chocolate Chai and add a splash or two of Bourbon into the mix.

Each year at the beginning of December, I hold a Christmas Shindig for all my friends.  I invite them all to London, offer them my floor should they need a space to crash, and we have a good old catch-up.  It's a great way to connect with friends I don't see often and lovely to mix everyone together.  This year we kicked off in style and met for cocktails and lunch at Dishoom. 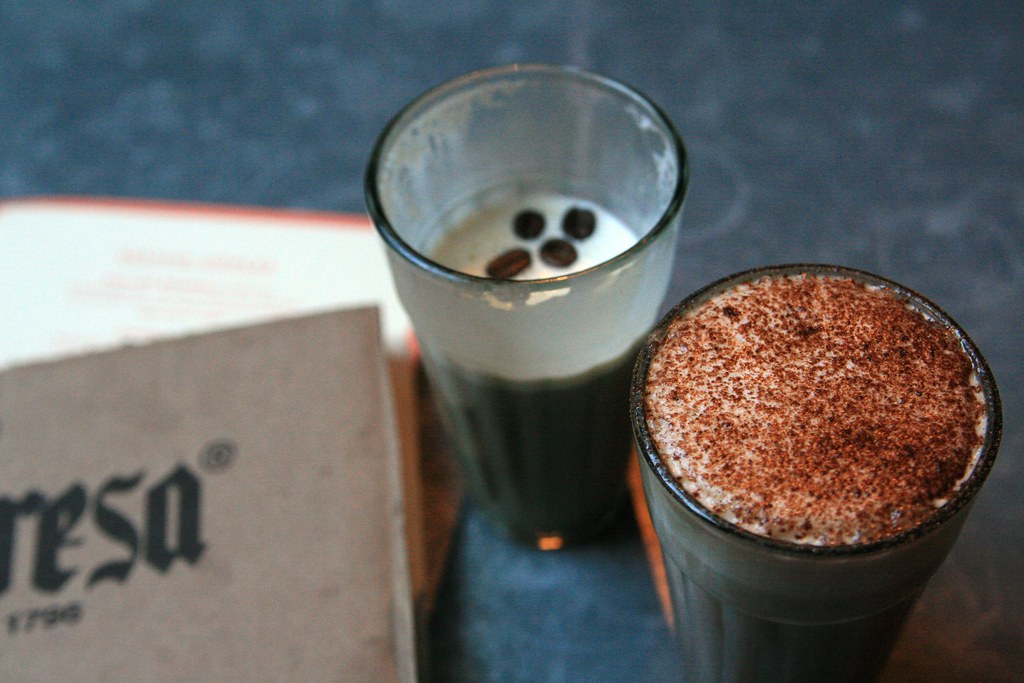 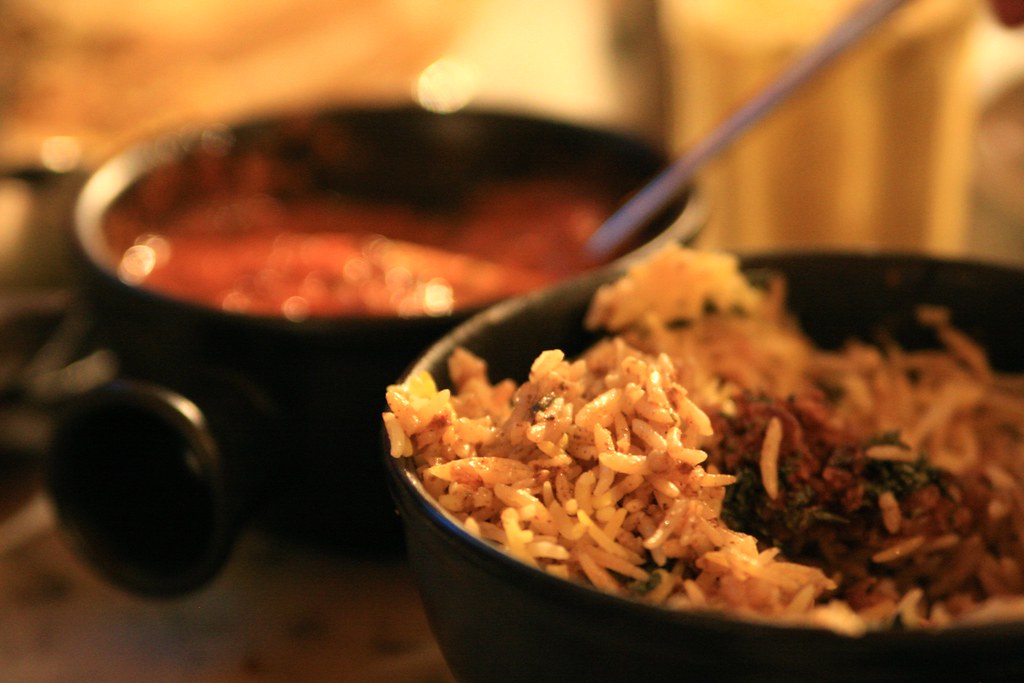 Dishoom in Shore Ditch is fast becoming one of my favourite restaurants.  It has a lovely bar in a conservatory that you wouldn't expect to find in so urban an area, and their cocktail list is exotic and enticing in equal measure, with an Eastern twist on the classics.  We moved to a table in the restaurant for lunch and the food works tapas-style, with dishes arriving whenever they're ready to be passed around and shared and squabbled over. 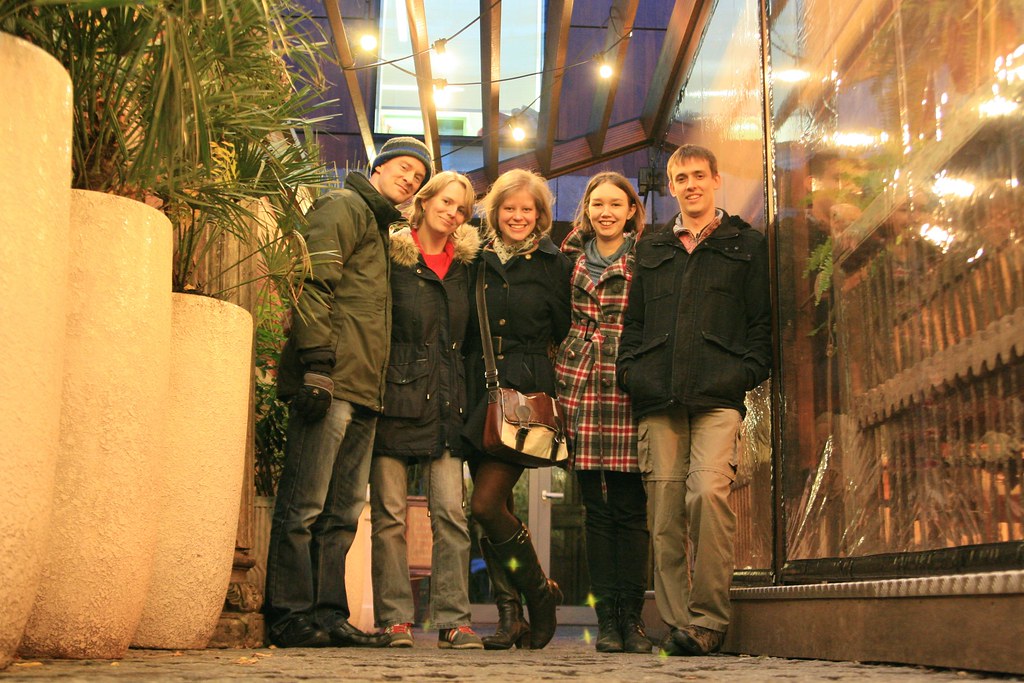 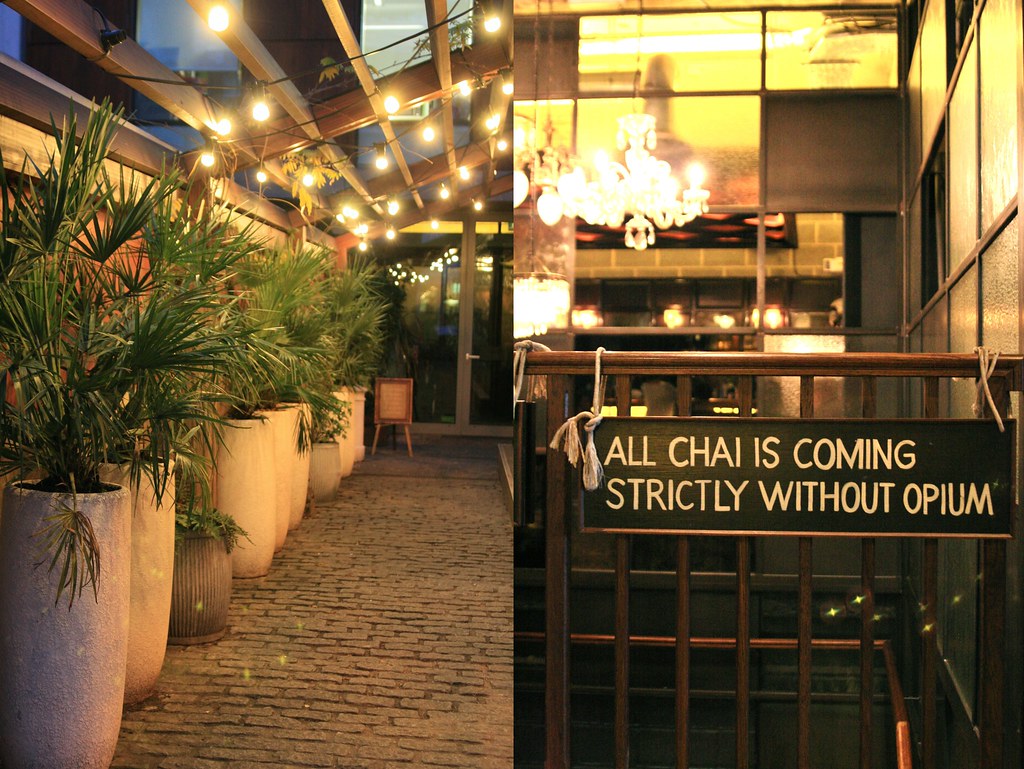 We were enthusiastically participating in lively debate over what food we wanted when a waiter came over, and asked if we had been before, and did we know how the restaurant worked. I hadn't but I don't like admitting it, as it seems weird to me to have to say no, as though I don't quite grasp the concept of, y'know, a restaurant.  Anyway, he clearly had his pitch to make, and he was cheerful and friendly, and so we let him launch into his spiel about Dishoom not being a curry house and that you don't just plump for a curry-rice-naan combo. He suggested we all pick a dish that we liked the sound of. Then he announced he would bring us two of each so that we could share and try them all, and that he was going to bring us lots of roti, and no rice.
I don't like being told what to order, but figured in this instance you have to just go along with the group.  One of our number however was unmoved and﻿ proclaimed he would like some rice, and so one dish of rice was duly ordered. 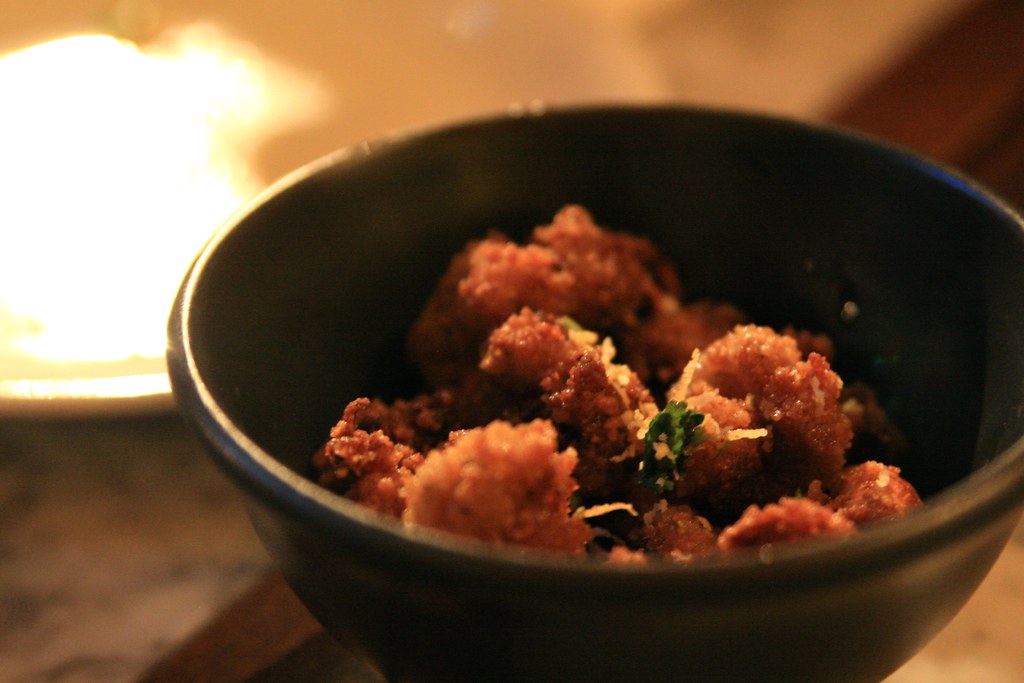 Confession time: the waiter's advice was perfect. We ended up with a great selection of dishes with plenty of food for everyone to try everything, and gorge on favourites until fully satisfied.  And then some. The roti was a wonderful accompaniment to the dishes; a fine, very thin flatbread, almost like a wrap, but hugely long and wound round and round itself into a roll.  Long strips could be torn off and consumed with considerable gusto.
The food was unfailingly delicious with enormous flavour and the Bombay Café vibe meant dining was casual and you could dip sticky fingers into a many a treat, mopping up the remains with warm roti. My favourites were the frankie rolls, which were like little stuffed naan bread parcels, the calamari, served piping hot, coated with a delicious crispy crumb, and the vada pau.
I ordered vada pau largely because it was described as the Bombay equivalent of a chip butty, which seemed like a good start to me, but actually it's so much more and doesn't have chips. And that is possibly the only time I will type that sentence and not mean it as a criticism. I would be hard pushed to describe its contents except to say that it came in a bread bun, was beautifully, mouth-wateringly spiced, and disappeared in mere seconds. 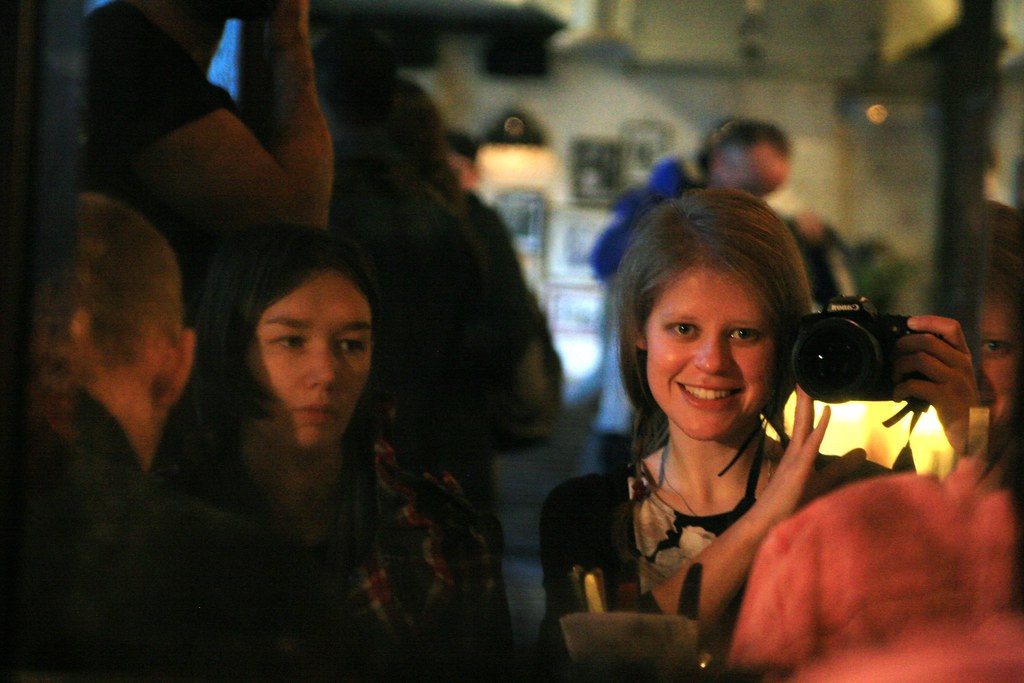 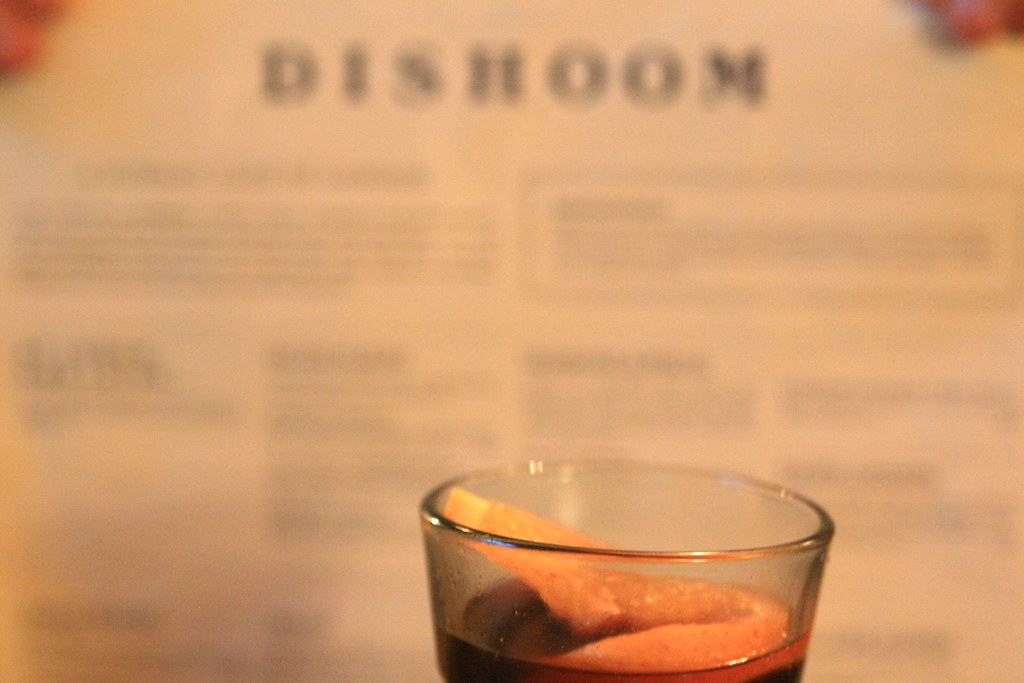 In December, a lovely spiced mulled wine doesn't hurt either.
So there was plenty of food to go round, service was speedy and helpful with the waiter's advice proving excellent, and a good time was had by all.  I think the only thing we didn't completely demolish was the sad dish of rice.  Not because it was bad, but just because it was unnecessary.  I enjoyed bothering other diners in order to get nice pictures of the lovely, slightly-faded décor which has an air of bygone colonial-era days, and even though I was very full, I was delighted to discover that I could still manage another hot chocolate, naughty-chai style. 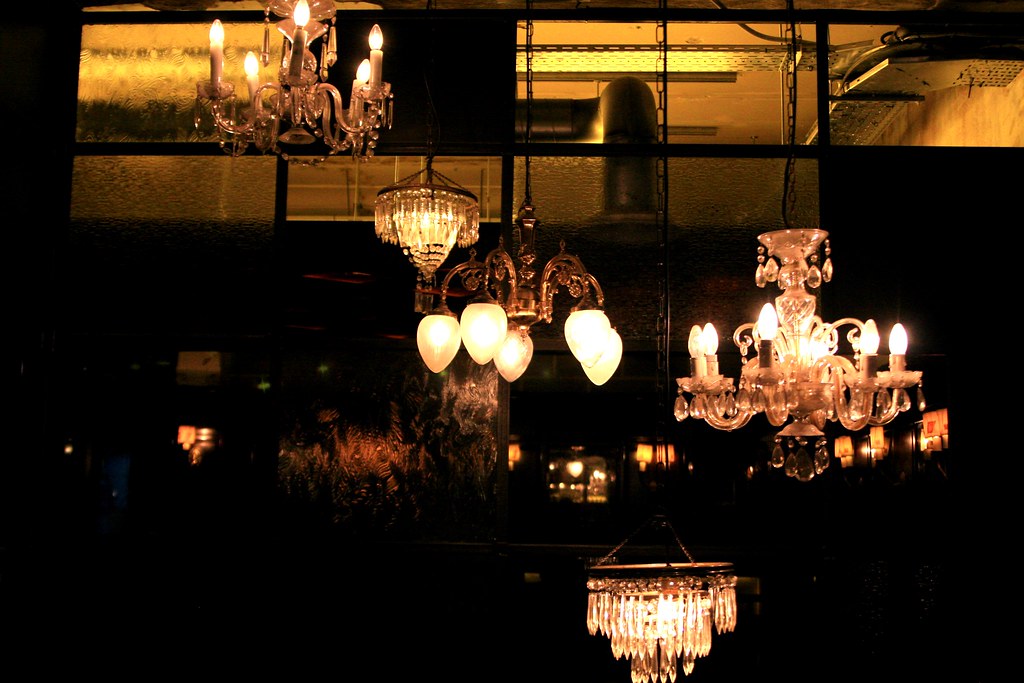 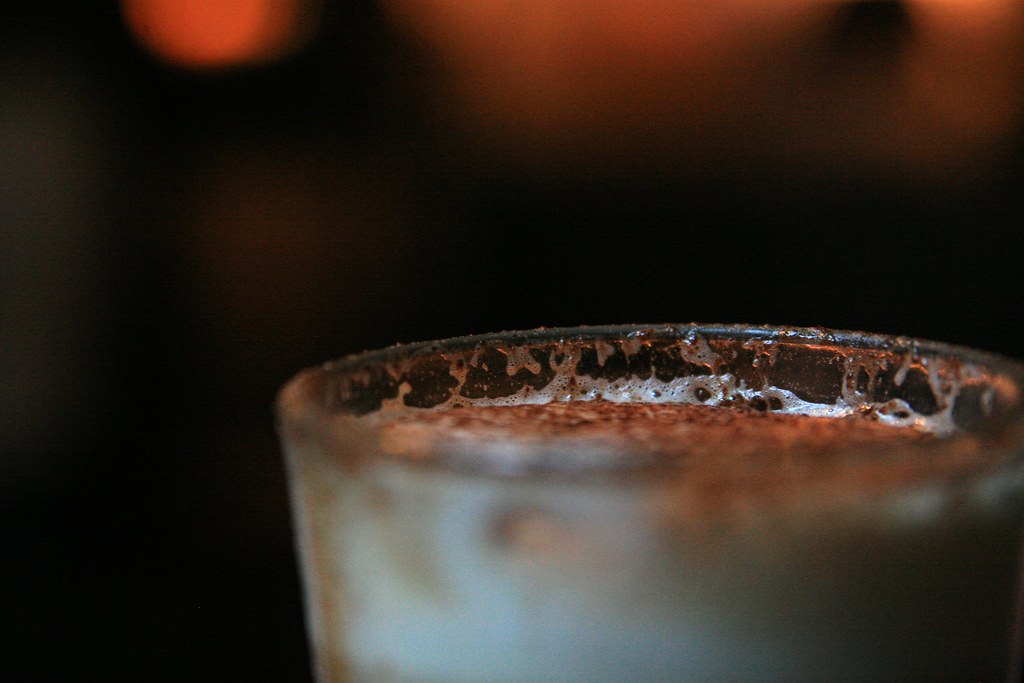 So I will keep going back to Dishoom: it's delicious, and I want to eat the things I haven't tried yet, and order the same things again as they were delicious. It was a perfect venue for a long, lazy lunch with friends, and I look forward to my next visit.