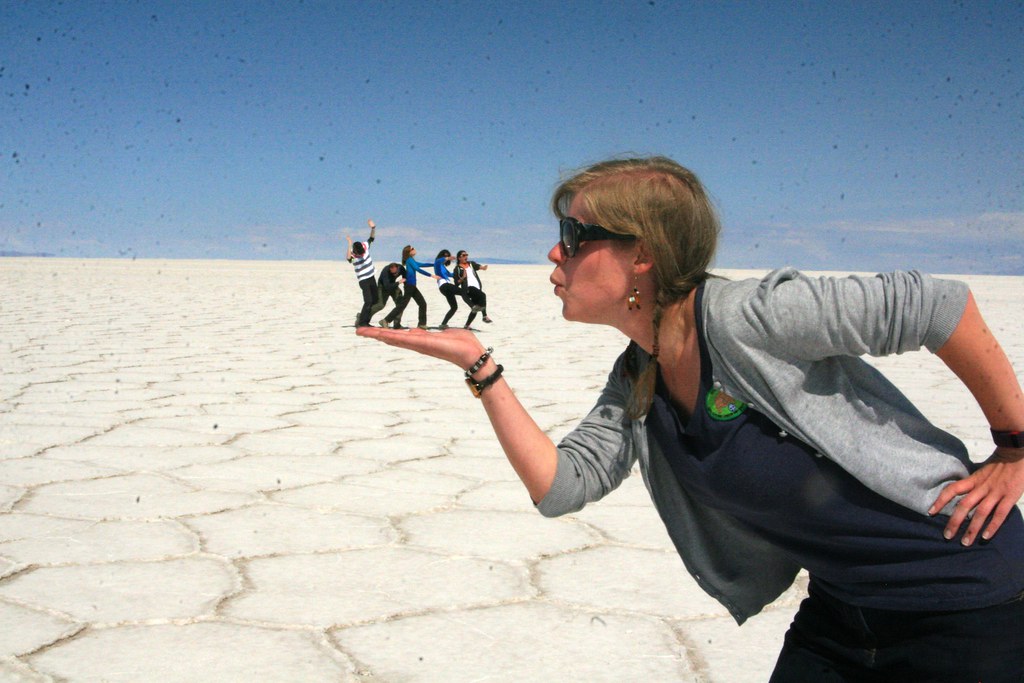 With a 3-week volunteering project lined up in Ecuador with Girlguiding this summer, I knew I had to take the opportunity to see as much of South America as I could.  So when my team returned to the UK, I stayed on to travel.  Deciding where to go was easy: it had to be Bolivia.  And it had to be the salt flats.

I had seen pictures of the huge, flat plains of salt when googling South America back in university.  It's been on my list to visit ever since, as I have literally never seen anywhere else like it.  So I booked my flights to Bolivia, joined a tour run by Oasis Overland, caught a 4-hour bus and a 7-hour train up to Uyuni, and got ready to explore the region by jeep. 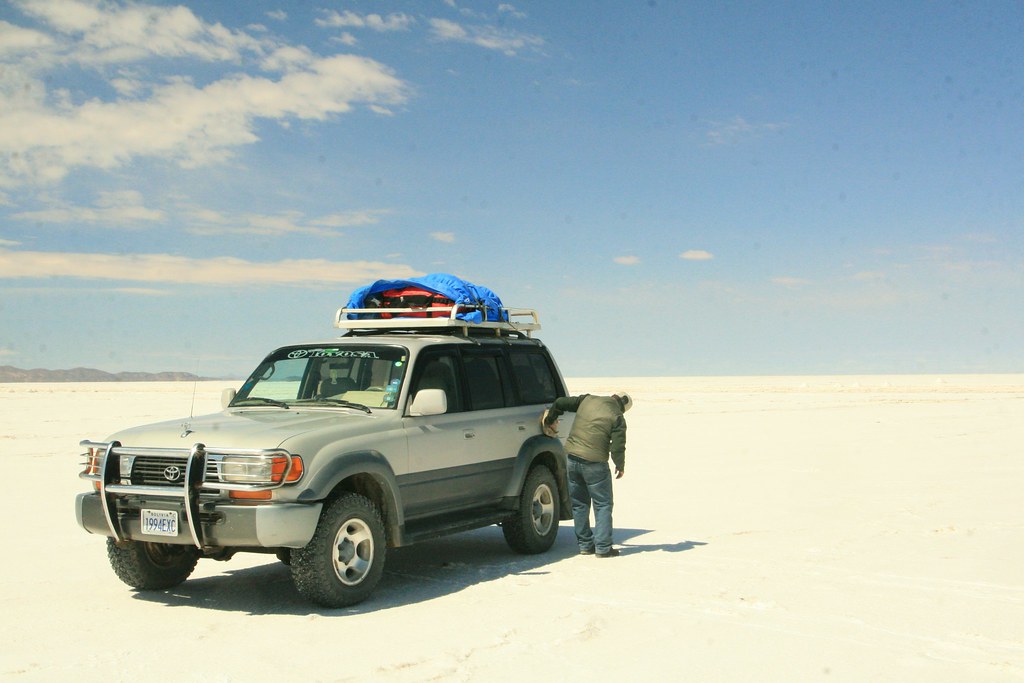 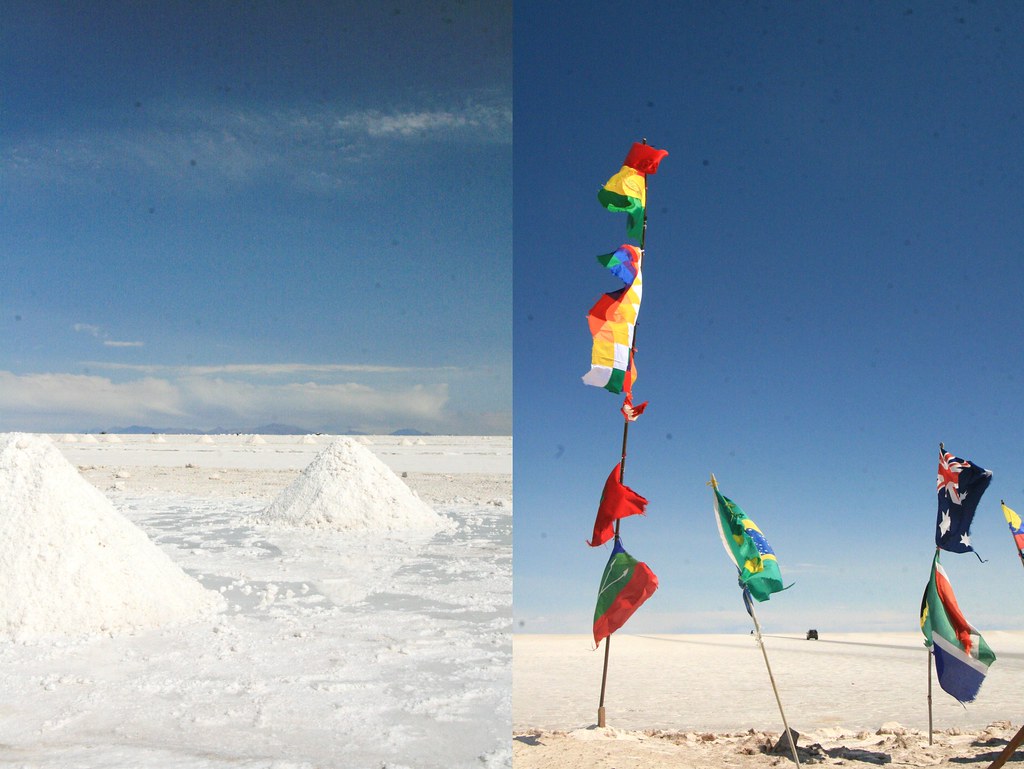 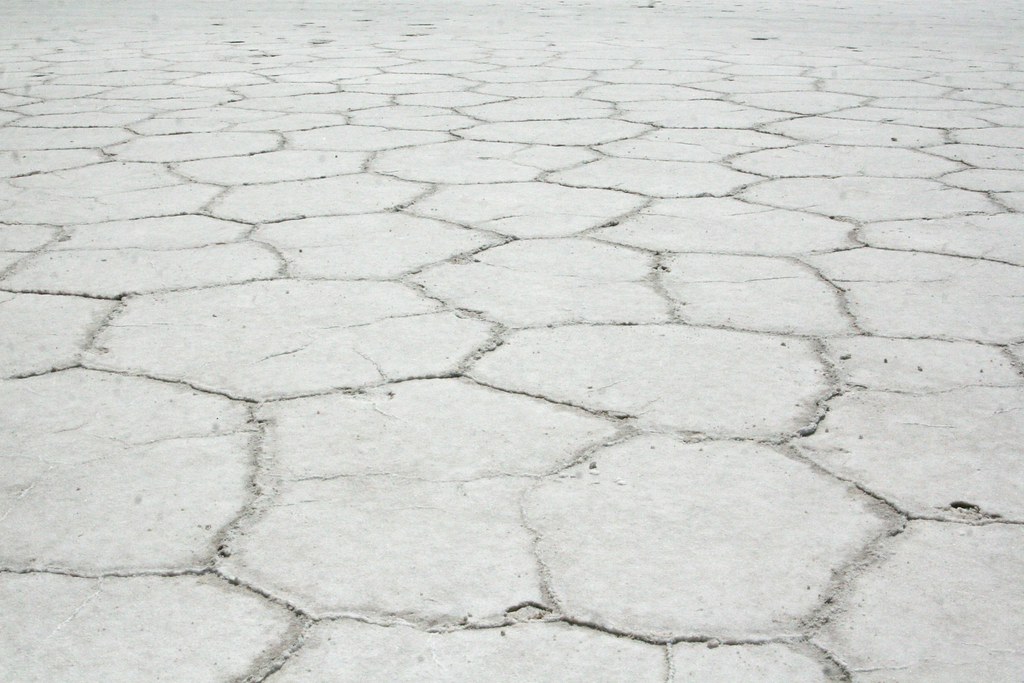 We set off nice and early one morning, and before long approached the edge of the salt flats.  It's dazzlingly white as the sun arrows down from an impossibly blue sky, and reflects in a hazy glare.  And it's cold.  Bitterly cold.  But there is so much beauty here, in a stark, brittle way.  We climbed out of the jeep, and you almost expect to be stepping onto snow.  But instead it's hard planes, cracked into geometric tangles, and playing with perspective.

And then it was time to do the 'funny photos'.  As Marco, our guide, said.  You don't need to tell me twice! 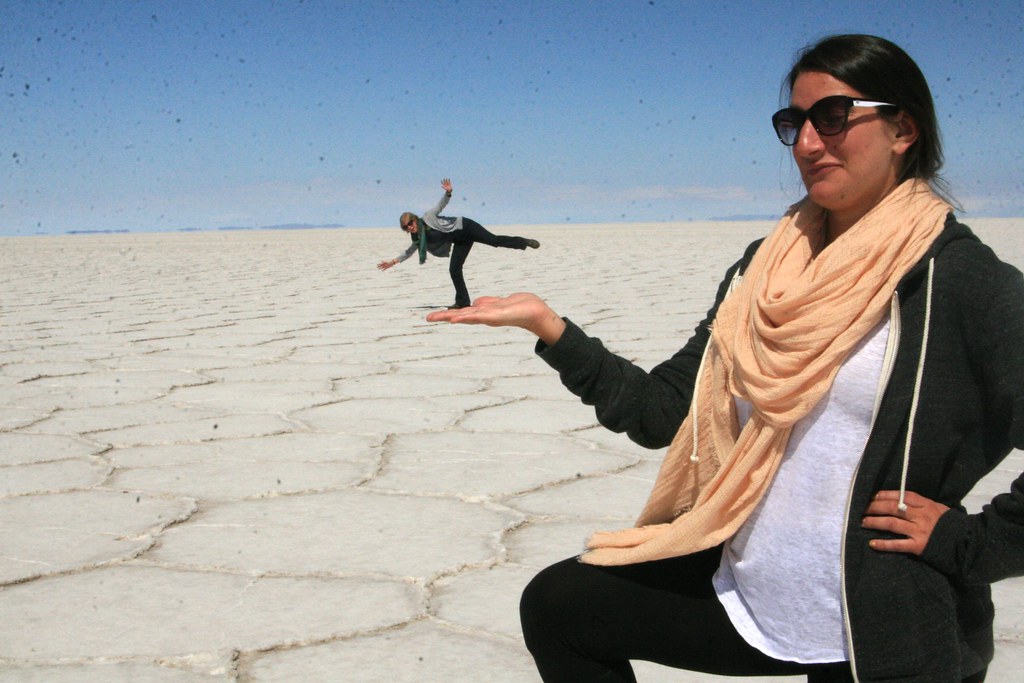 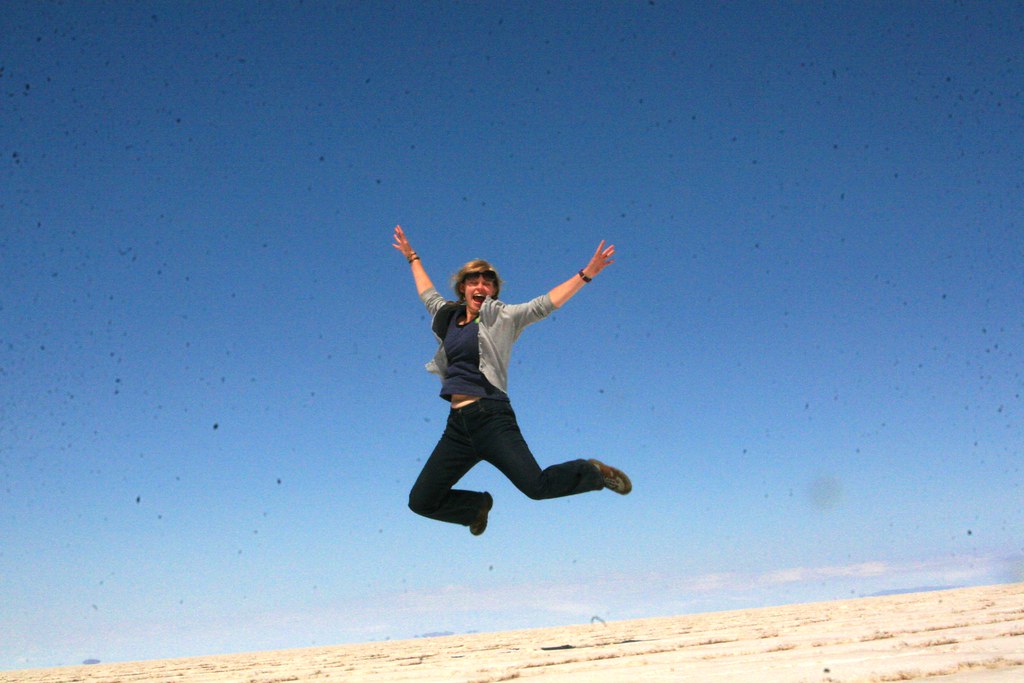 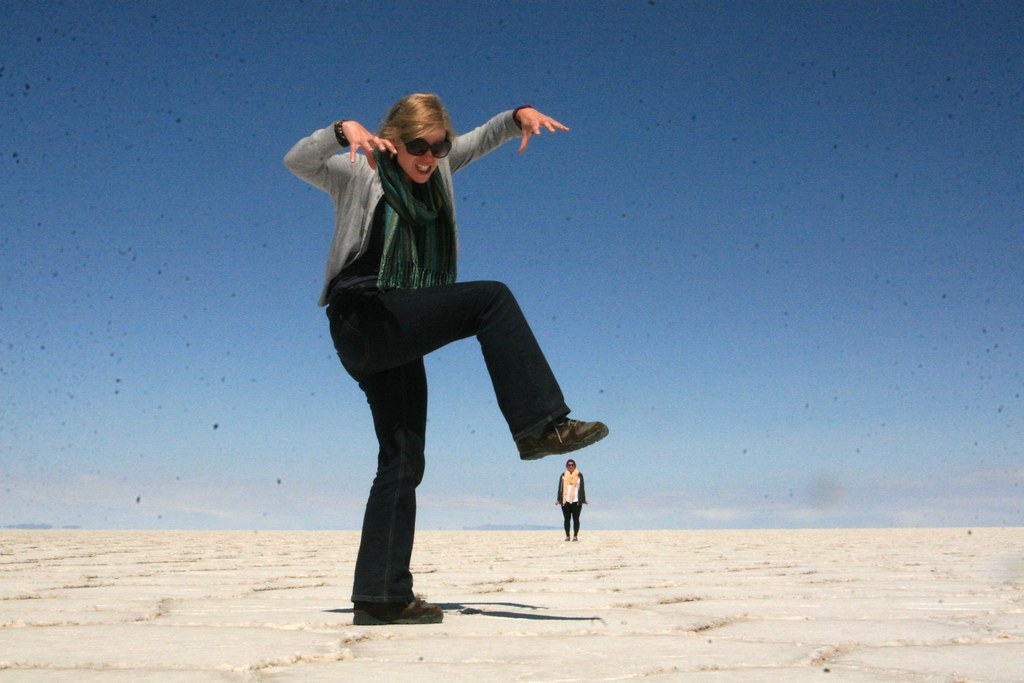 We drove to Incahuasi island; a rock jutting out from the flat salt.  Climbing to the summit, it really did feel like being on an island in a sea of pure white, and it was surreal to watch a jeep drive across its surface in the distance. Somehow in the crystalline cold, cacti reach their spikes up to the sun in defiance. The views were spectacular, and we explored, ventured into caves, and definitely didn't poke any of the prickles. 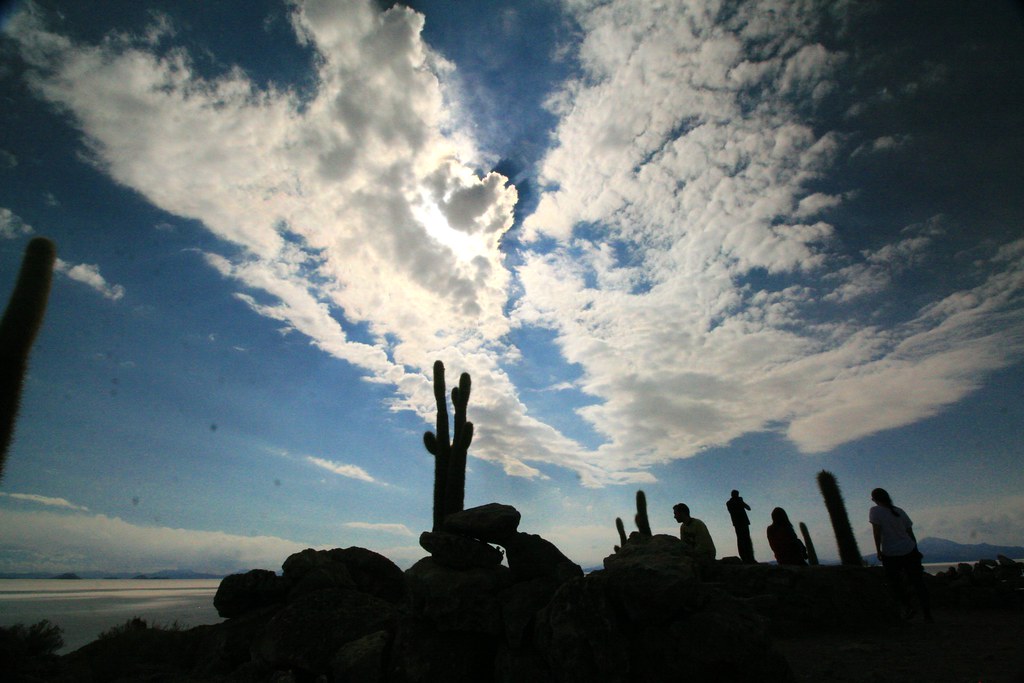 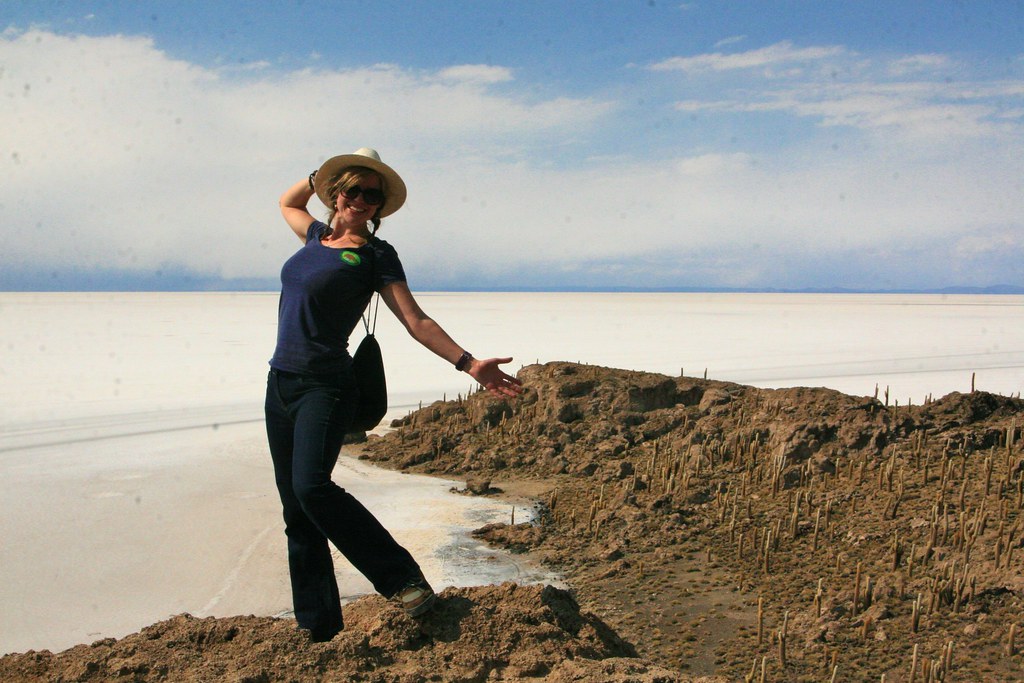 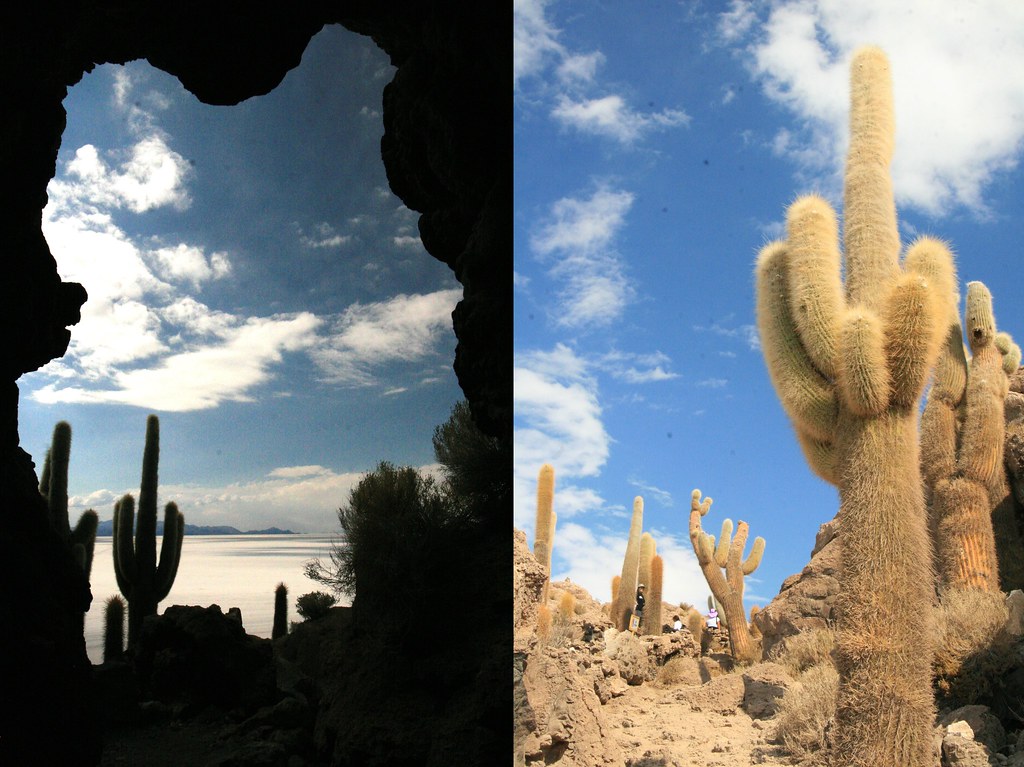 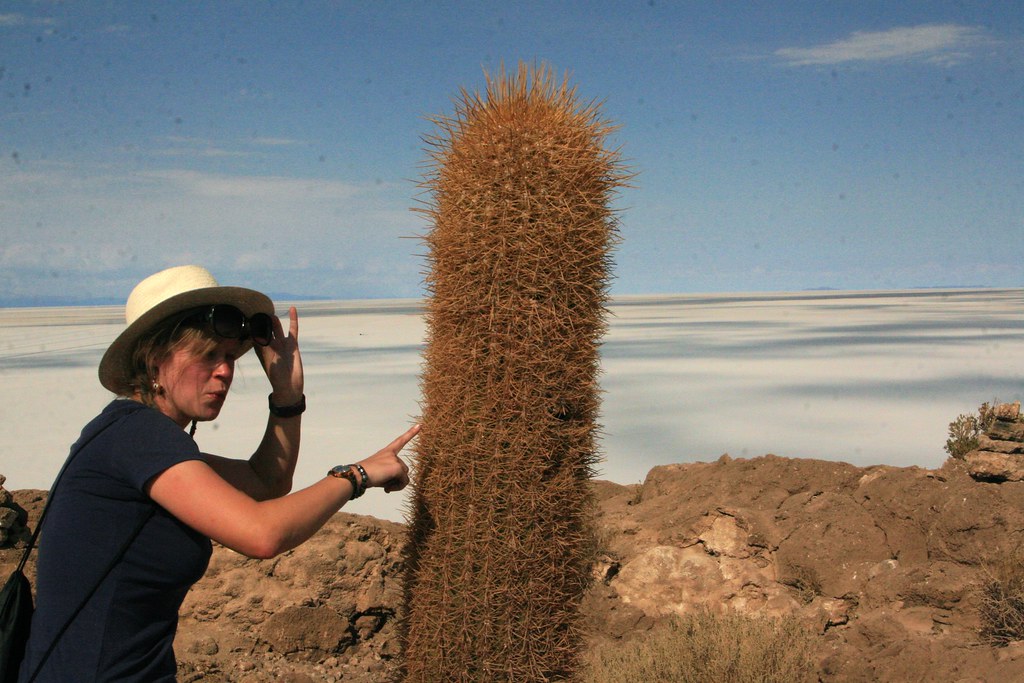 In fact, this vast, alien, ethereal landscape s impossible to describe, so I shall simply share pictures, and observe with some resignation that I should remember to clean my lens more regularly in sandy, dusty, windy environments!﻿

We reached the edge of the salt flats as the sun set, and Marco, our guide, commandeered lodgings for us all in a hotel made of salt!  It was simple (not so much with the electricity) but lovely, and we met lots of other travellers, sat round a salt table on salt stools, and headed for bed on our salt beds, wrapped up warm in 4 layers of blankets and a sleeping bag to fight against the rapidly dropping temperature.

An incredible experience, and we still had 2 more days exploring this wonderful, ecclectic, dazzling land.

P.S. Seriously, needed to clean my lens SO BAD. But never have I been so grateful for a polarising filter!
Posted by Miss Smith at 20:35 4 comments: 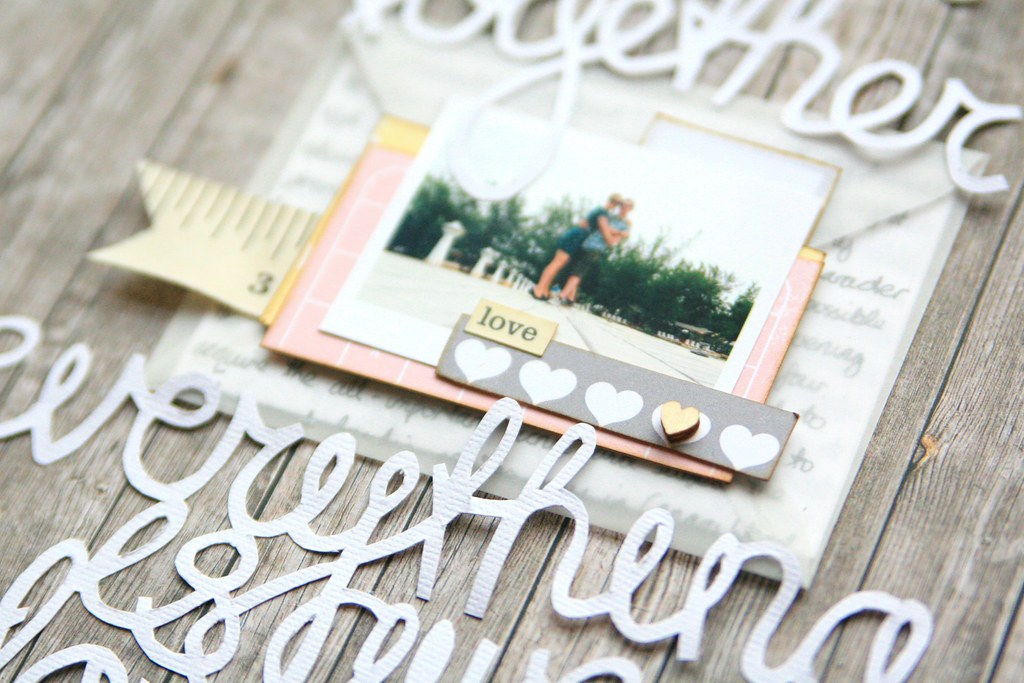 I haven't finished a scrapbook page since the spring.  The spring!  That seems like such a long time ago, and while I was away for the summer, and I've been busy with lots of lovely things, it has definitely been too long since I scrapbooked.  Now is the time to change that.
I have this weekend that very rare thing: a free Sunday.  And so I intend to challenge myself this weekend: I'm going to sit down and scrapbook.  My goal is to make 5 pages.  ﻿ 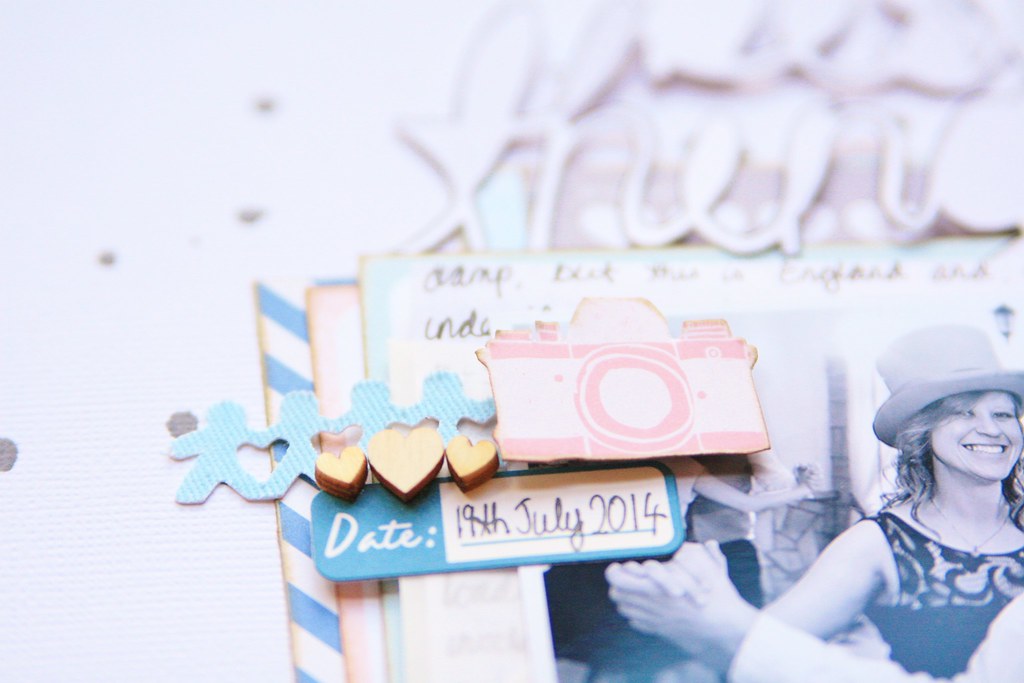 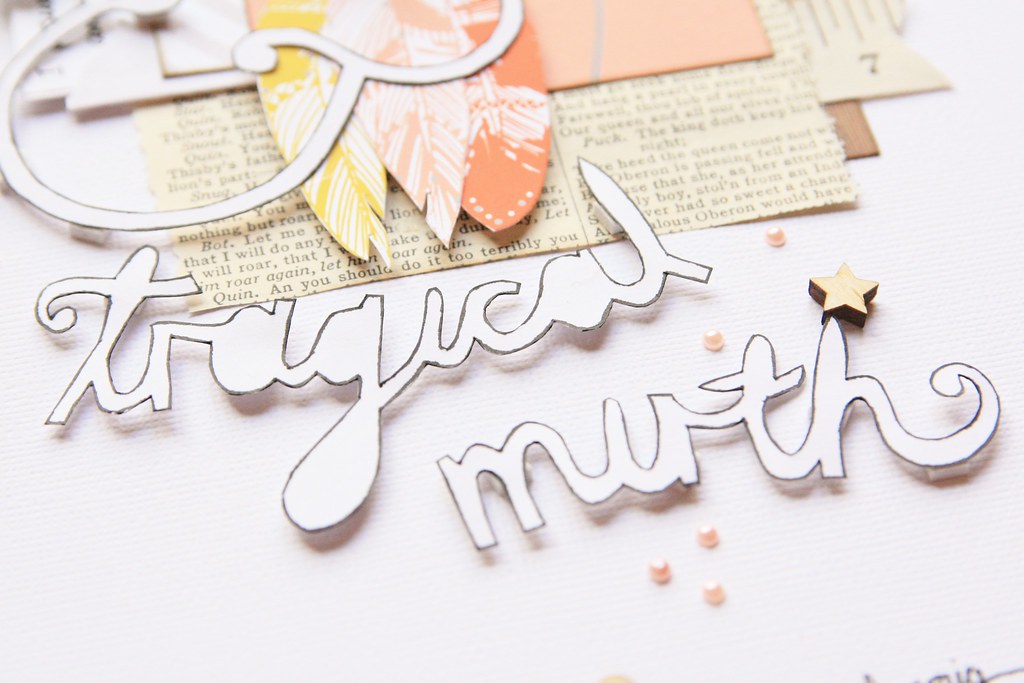 If you are a speedy scrapper, you might think that very manageable.  If you're anything like me, you will think that that is an insane number of pages to make in a day.  I think it's insane, as I normally take a day just to work on one page.  But I love a good challenge, and so Sunday will find me with scissors and paper and pretty things with stories to tell and photos to celebrate.  I'm getting back into scrapping.
And I don't mind if I don't end up with 5 pages.  If I only end up with one, that's better than nothing.  But I am really, REALLY looking forward to it! Sorting through old pages reminded me how much I love a hand-cut title, tiny camera embellishments, white backgrounds, tiny layers... I have missed the pretty things.﻿ 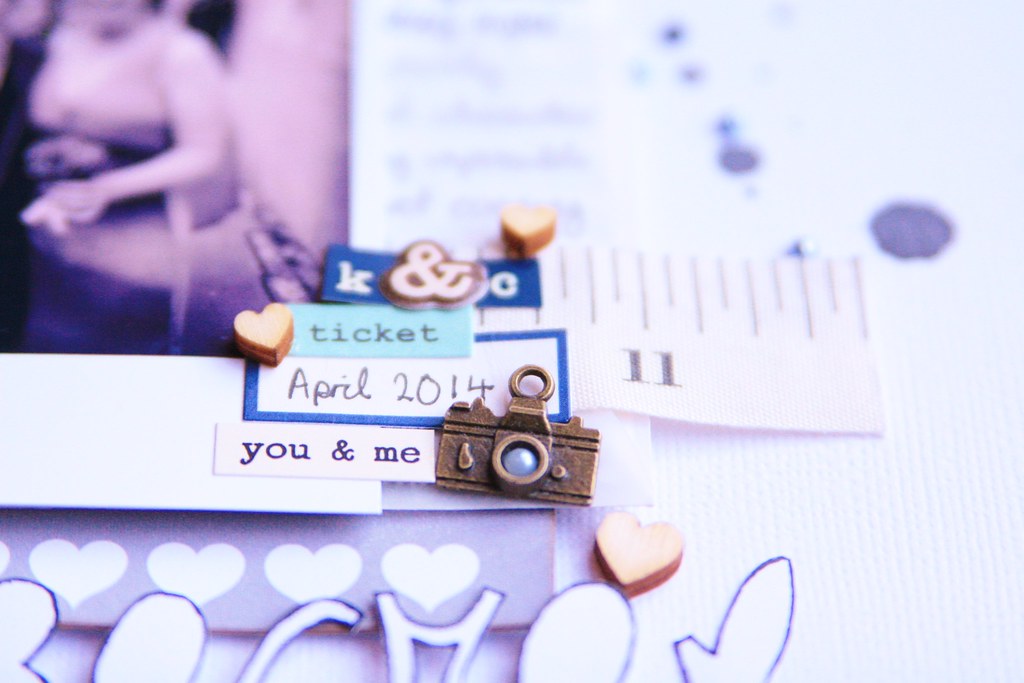 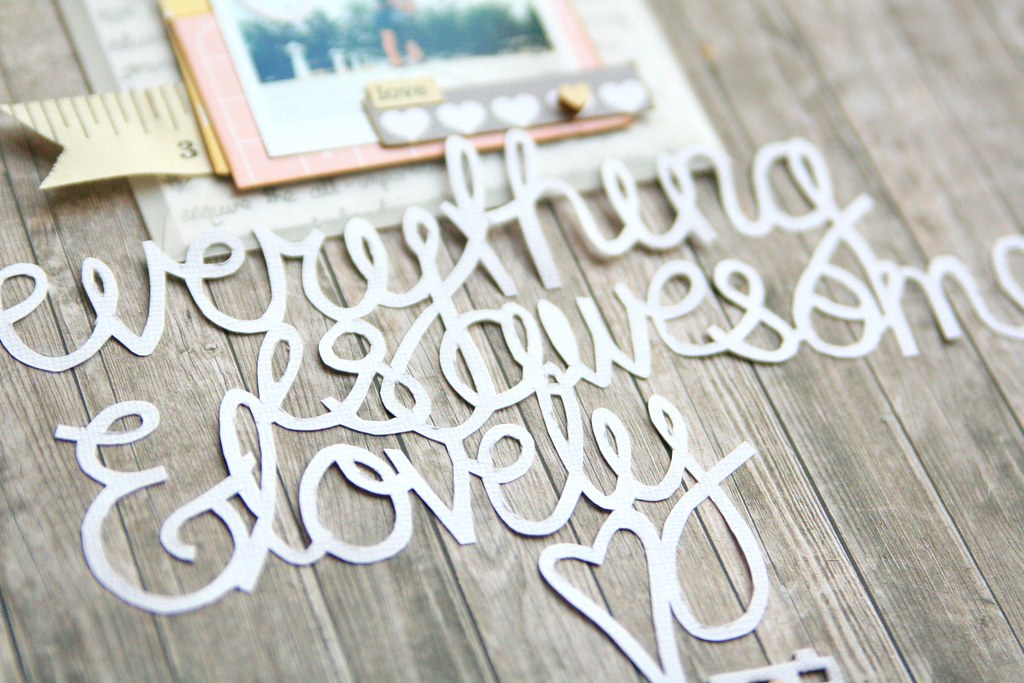 And if you get the chance this weekend, I'd love to see what you're making, or sharing.  I'll need inspiration! However, in terms of planning I'm going to keep it minimal.  The only preparation I will do is to print my photos.  And clear off the table, obviously.
And I will make sure that I have plenty to watch in the DVD line (I like to be entertained while I scrap) and will intersperse this with the odd Youtube and Class videos from Shimelle and Wilna.  LOVE them.
﻿ 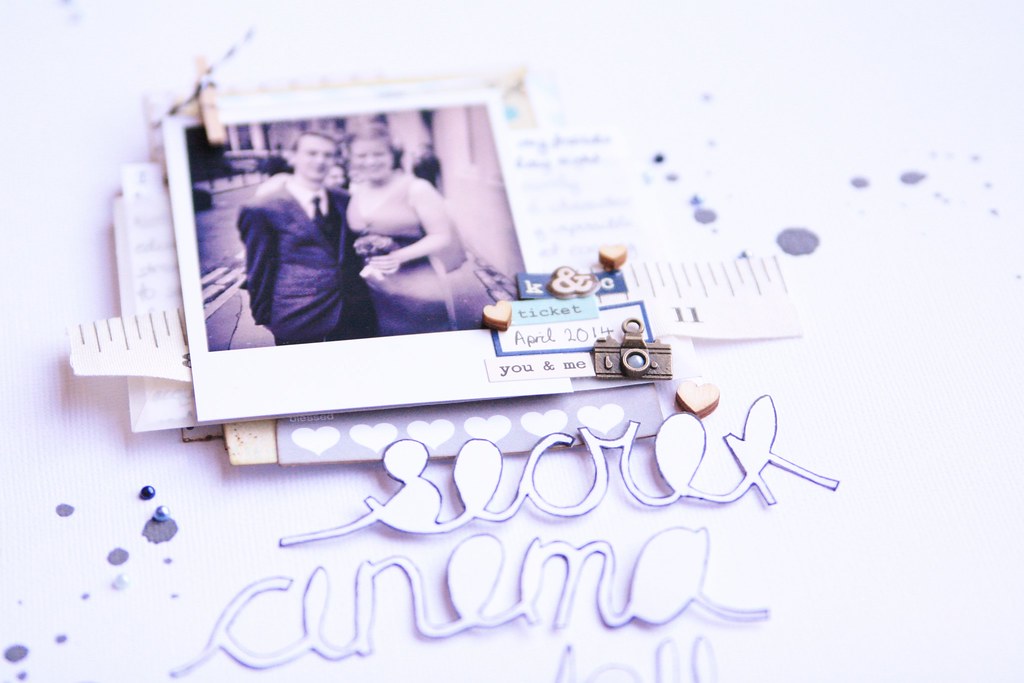 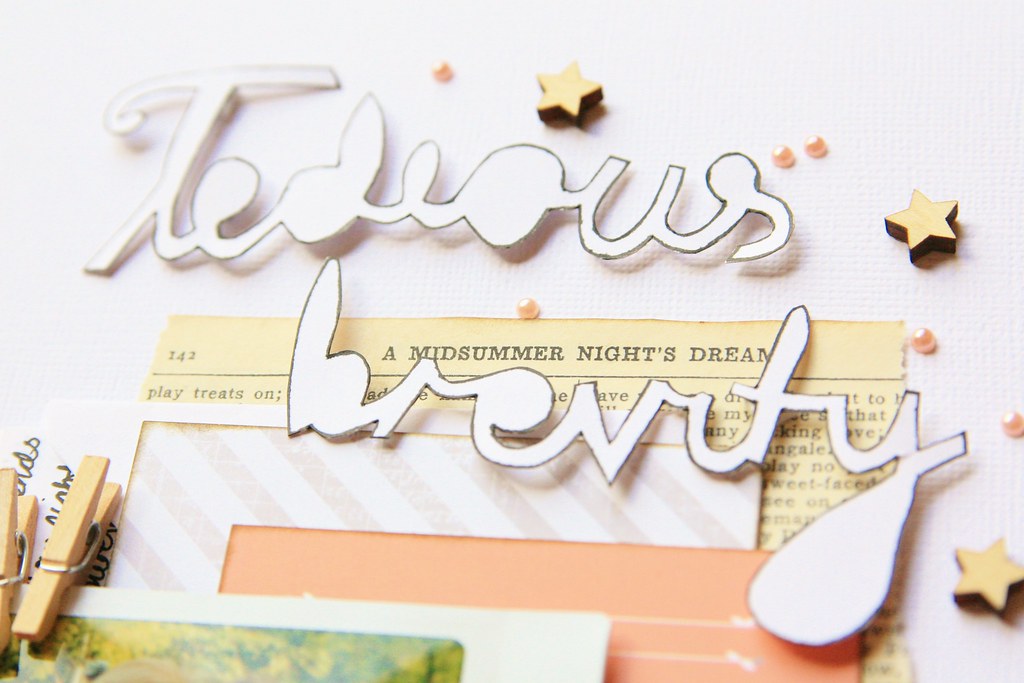 the middle of the world 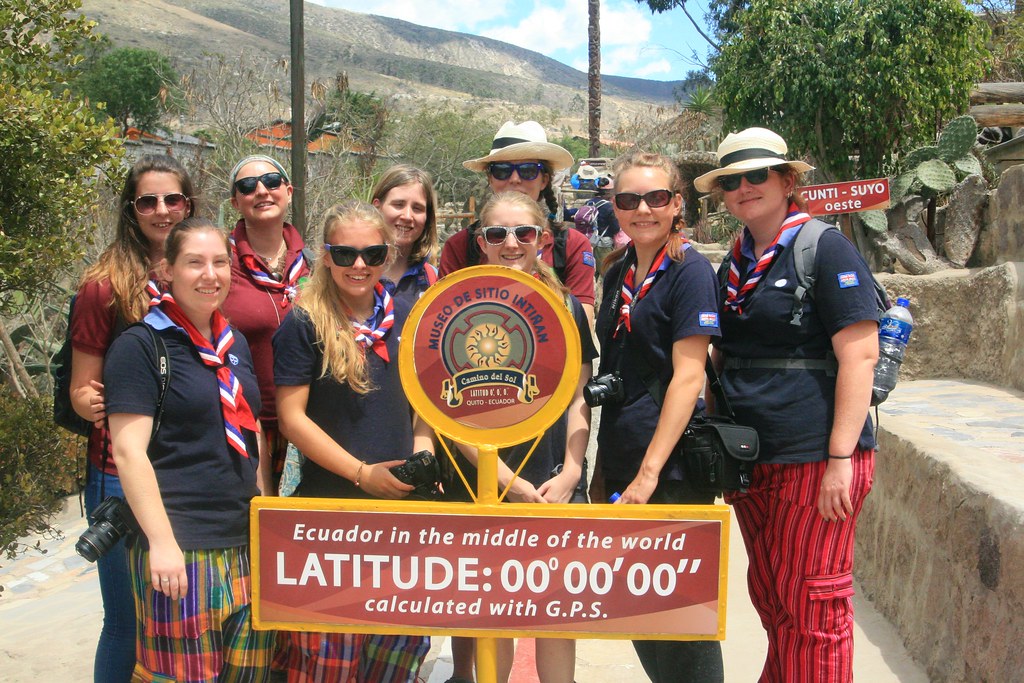 The Equator!  Any visit to Ecuador must include a visit to zero latitude.  Ecuador even means 'Republic of the Equator'.  However, this isn't as simple as it may seem: there are two separate sites that claim to be on the Equator.  And they're at different latitudes..

Only one thing for it: a visit to both! My intrepid team of Girlguiding volunteers and I set out to to investigate. 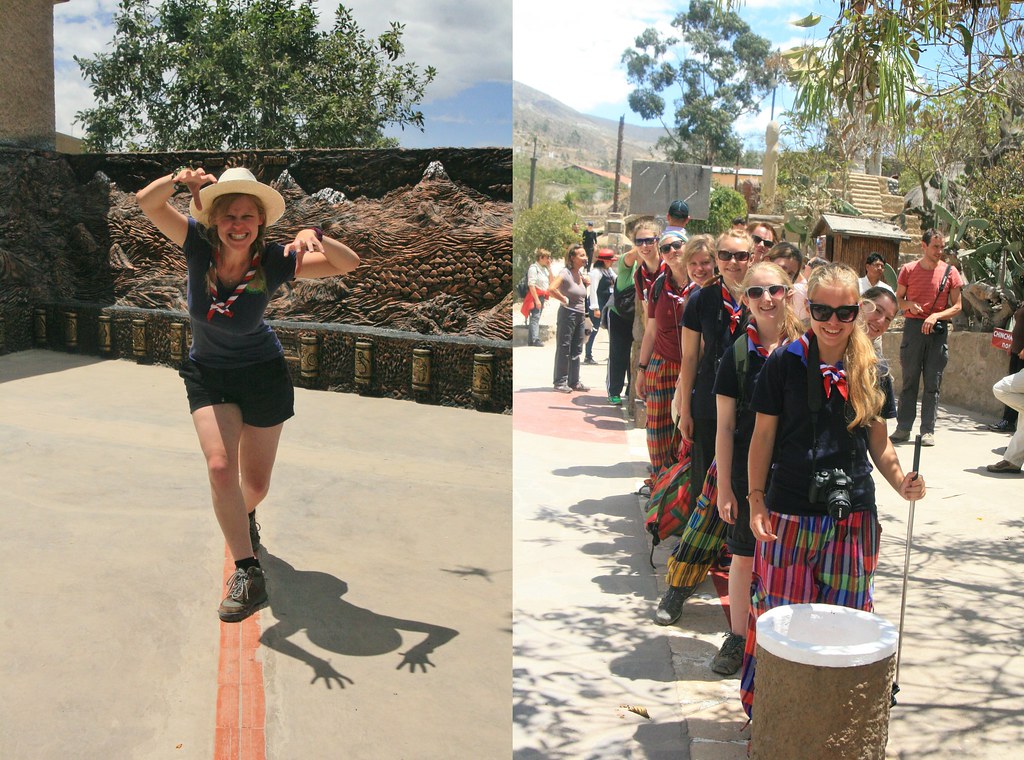 The first has a rather charming line painted on the floor, ideal for the posers among our ranks, and an excellent opportunity to break out with some selfie-stick action. And it seems that this is the 'real' equator.  At least, it's pretty much at zero latitude. 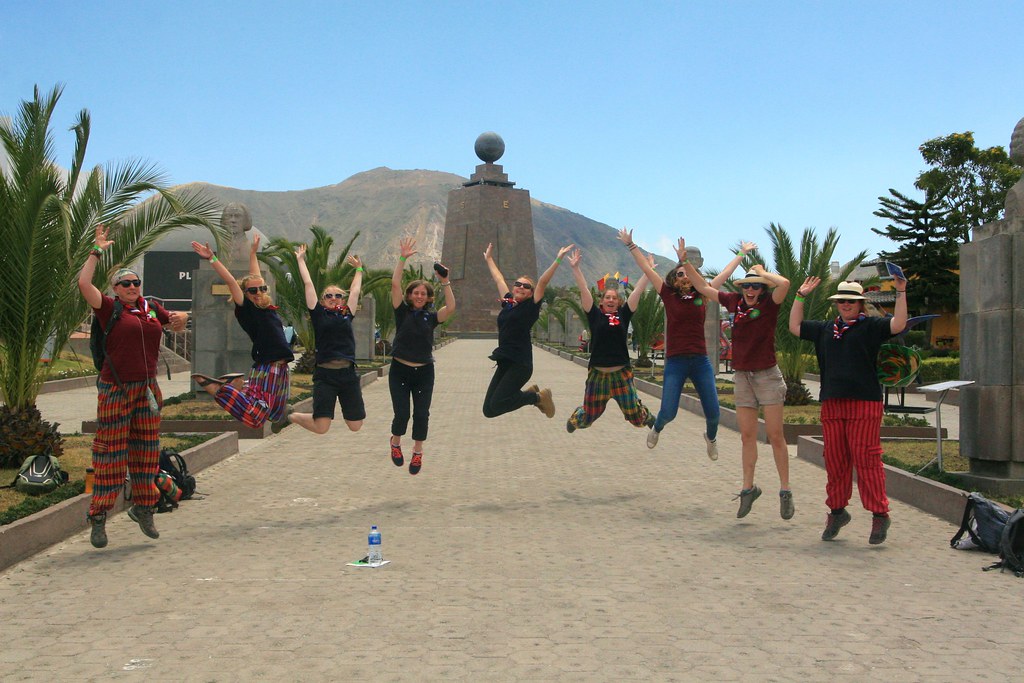 However, then we made our way to the official, if slightly inaccurately placed, equator monument.  Apparently French astronomers calculated this position to be on the equator, and given the equipment available to them at the time, they were pretty close.  Having said that, nowadays, we were told that any half-decent sat nav will tell you that you're a bit off, if you were hoping to stand at the middle of the world. 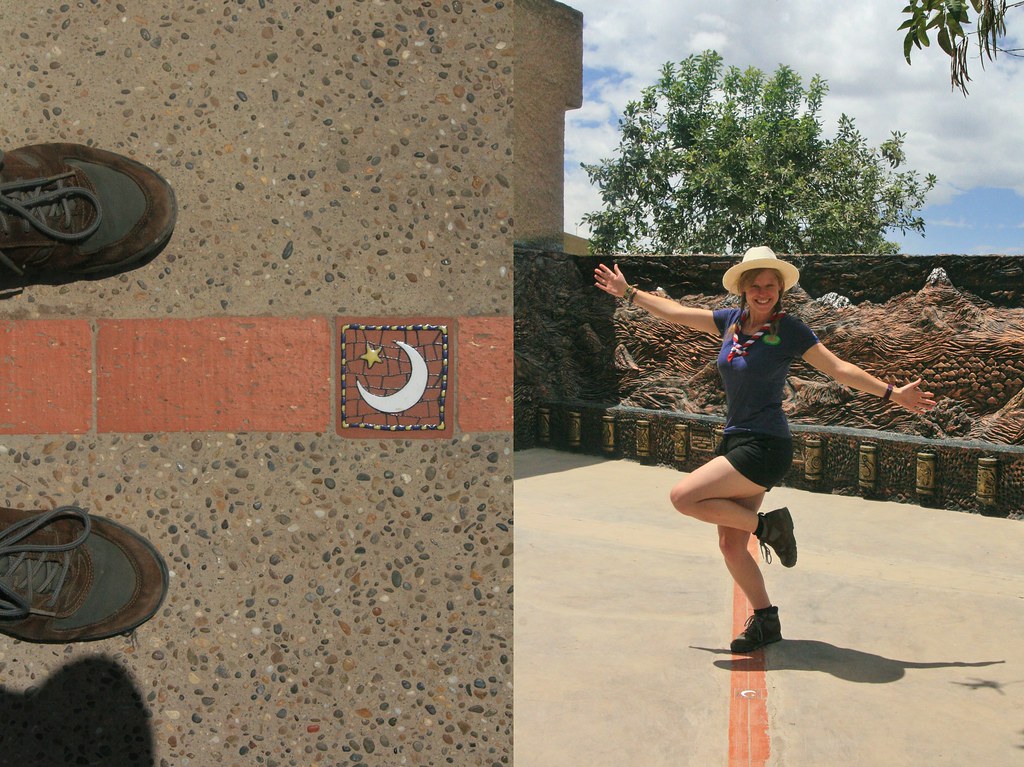 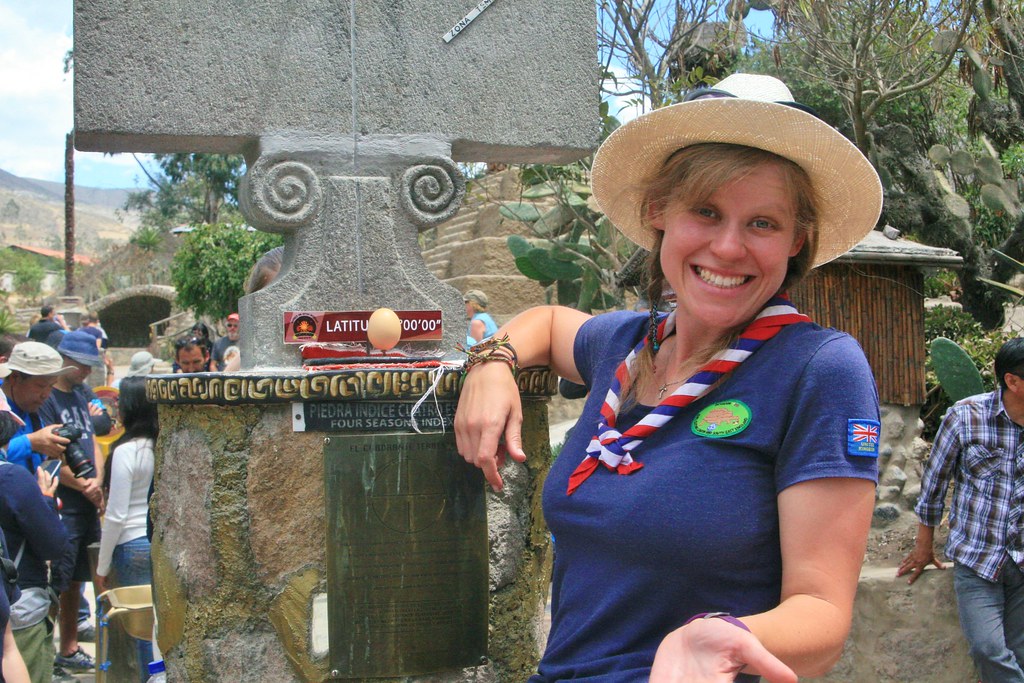 Something both sites have in common is extremely 100% convincing and genuine museums of not-at-all dodgy equator science. Because only if you're exactly on the equator can you balance an egg on its end on teh head of a nail.

I got a certificate proclaiming me to be an Egg Master. This was at the 'real' equator site, and our guide was brilliant, explaining and demonstrating all the science (we observed water spiraling in different directions down a plug hole) and we also learned about chocolate production, pre-Incan civilisations local to the area, and got an official equator stamp in our passports. 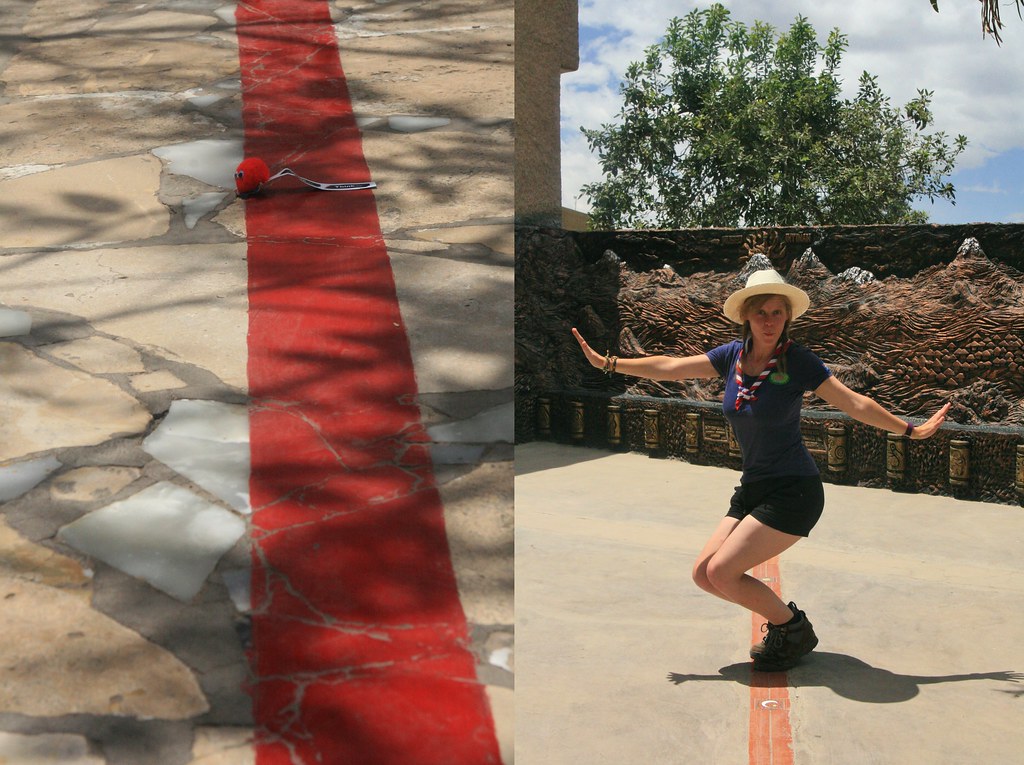 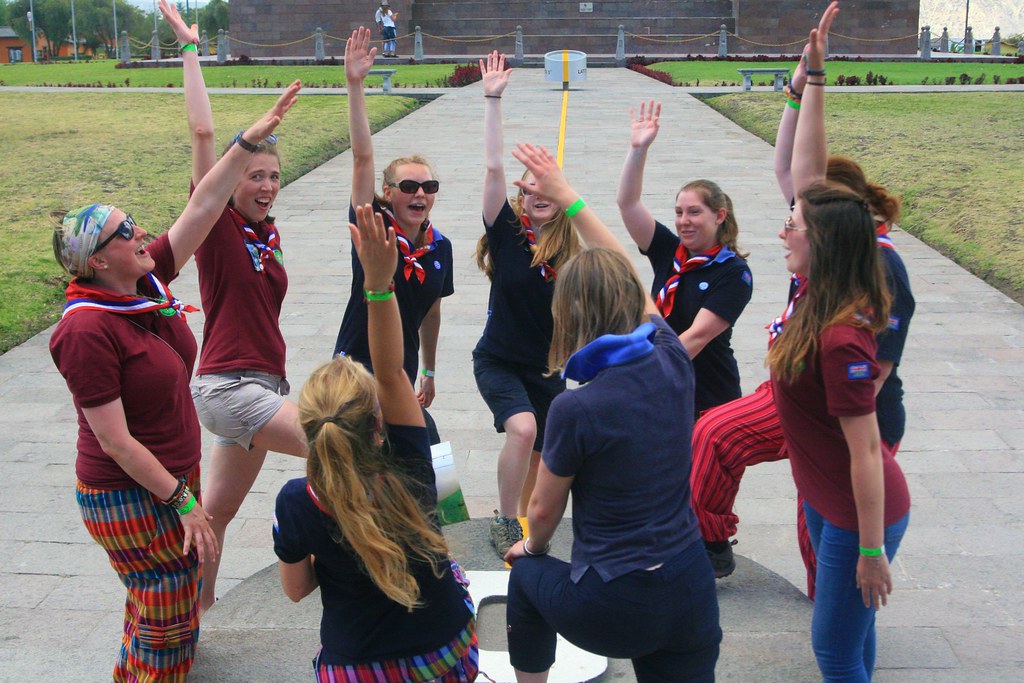 We ended our visit to the 'fake' equator monument by renewing our Girlguiding promise.  We videoed it (and so did another tourist, which was a bit strange) and Jazzy and I presented the team with promise badges to celebrate the occasion.  It's certainly the most exciting place I've ever renewed my promise, and it was a great way to make our visit significant to us as leaders within Girlguiding.

P.S. I know it's been a while since any updating has happened by now photos are prepared and I'm gradually hoping to be back with South American adventures and crafty projects :D  Yay blogging!
Posted by Miss Smith at 21:45 4 comments: