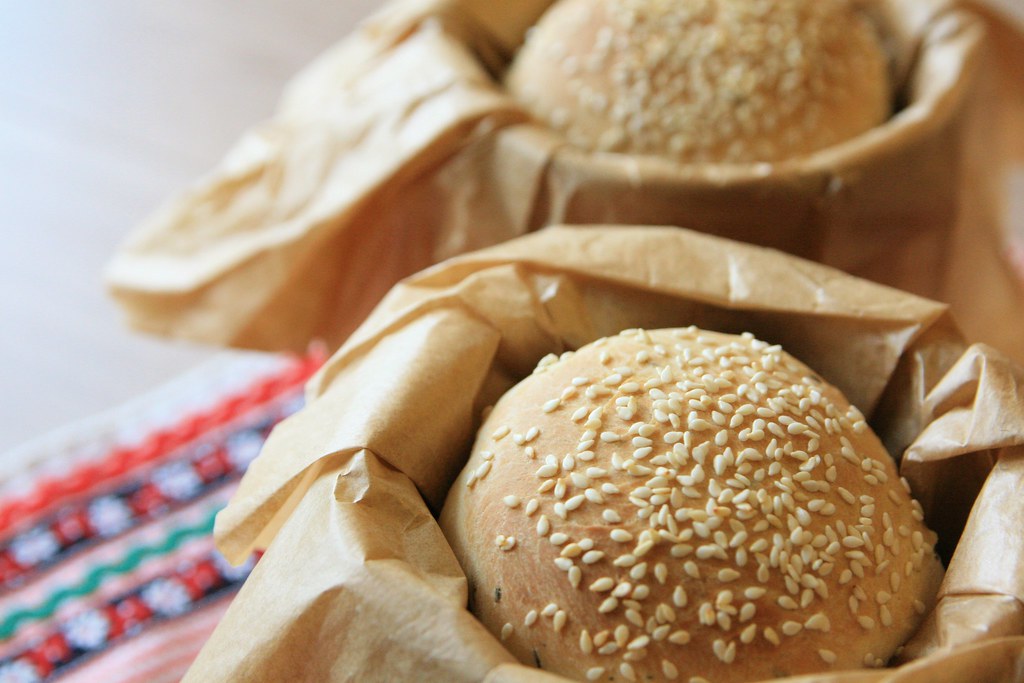 A couple of weeks ago, we made flowerpot bread with our Guide unit. This is not a small task, as all the flowerpots need to be sourced, purchased and prepared with careful washing, oiling and pre-baking.  I actually did not undertake any of the mammoth preparation, because my fellow Guide leaders are frankly awesome, but I'm informed that oiled baked flowerpots don't smell like the best thing in the world.

But the bread really does! So I jumped at the chance to take home a couple of spare pots and try out the recipe for myself. 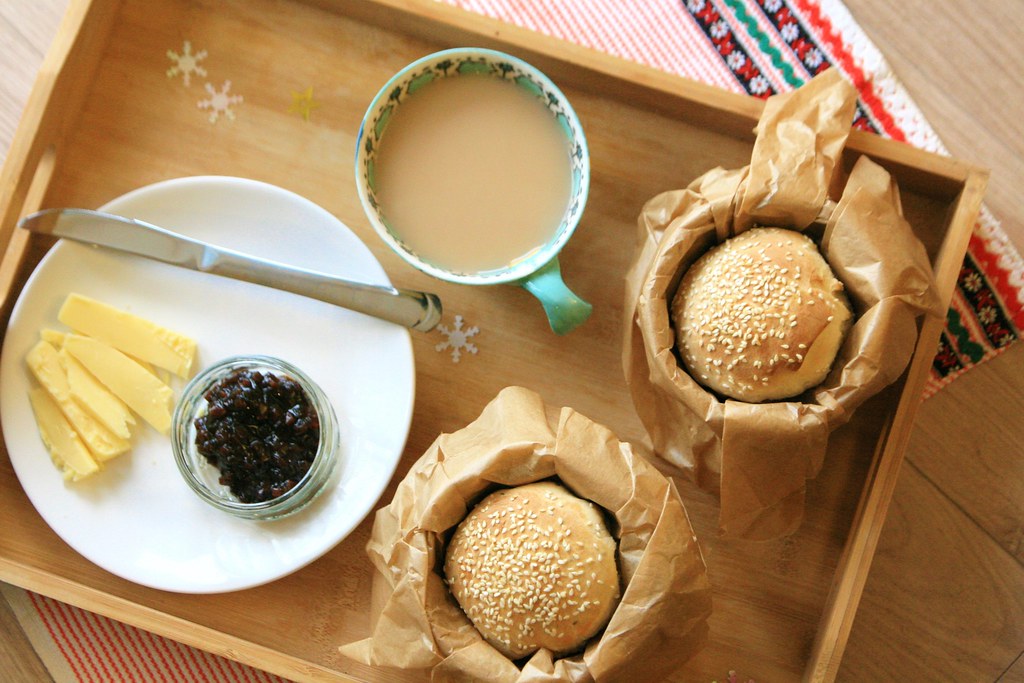 Flowerpot bread is a rainy Sunday afternoon sort of activity.  Or at least it is if you're not doing it on a Friday night with 40 girls.  Anyway, when we did it with the Guides, they made the dough in groups, measuring out the ingredients, kneading it and slipping into their greaseproof-lined pots to take away and bake at home, so I hadn't seen a finished product.

As I was saying, I recommend undertaking this little project on a relaxed and rainy Sunday afternoon. And if you are so inclined, I have linked to the recipe here. 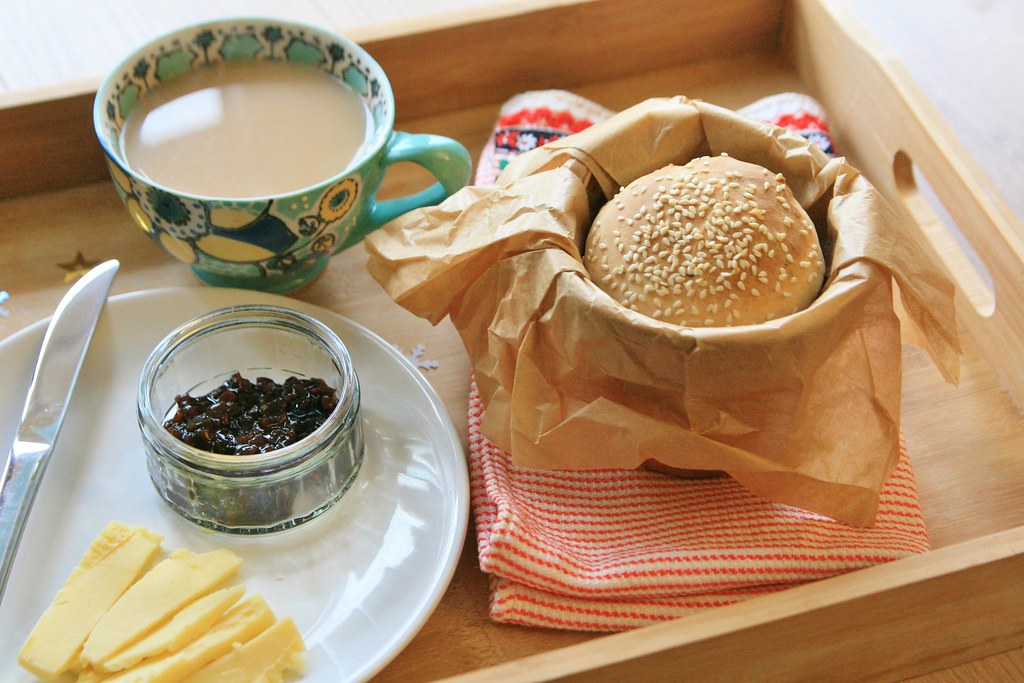 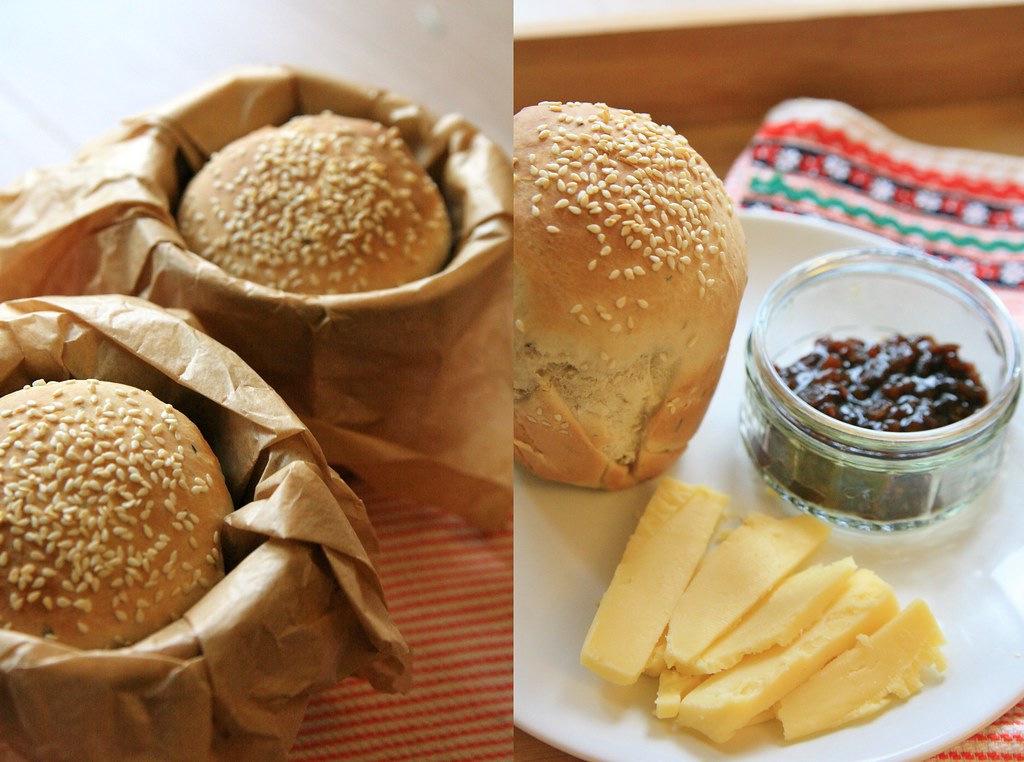 The recipe is very straightforward and pretty much failsafe.  It kind of has to be for the Guides, especially after the memorable incident some years ago when our enthusiastic young bakers confused pounds and grams and tried to add 7 pounds of baking powder to their fortune cookies.

Fortunately, they didn't have 7 pounds of baking powder, and the fortune cookies were rescued.  Sort of.

But this bread?  Simple! In fact, I was a little concerned about mine as it didn't rise much when it was proving; perhaps it was a bit chilly for my little tiny yeast friends. But it came up a treat in the oven and all was well.

Incidentally, the idea of yeast completely scuppered some of our Guides who were horrified to hear that it's alive.  I'm not quite sure what they imagined it was going to come out like: zombie bread that would eat them? 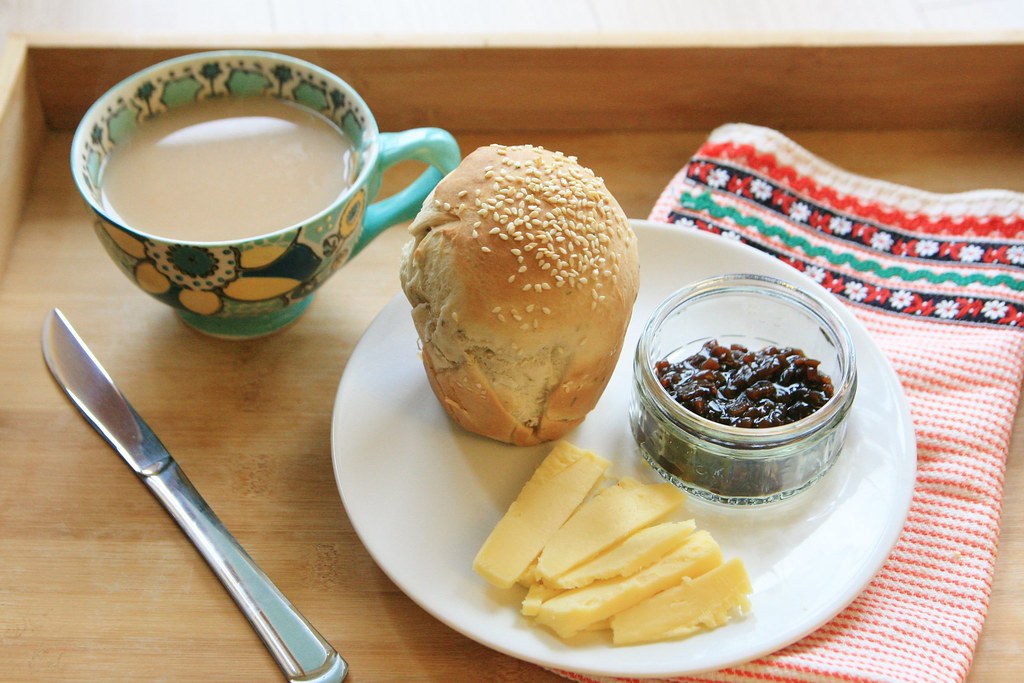 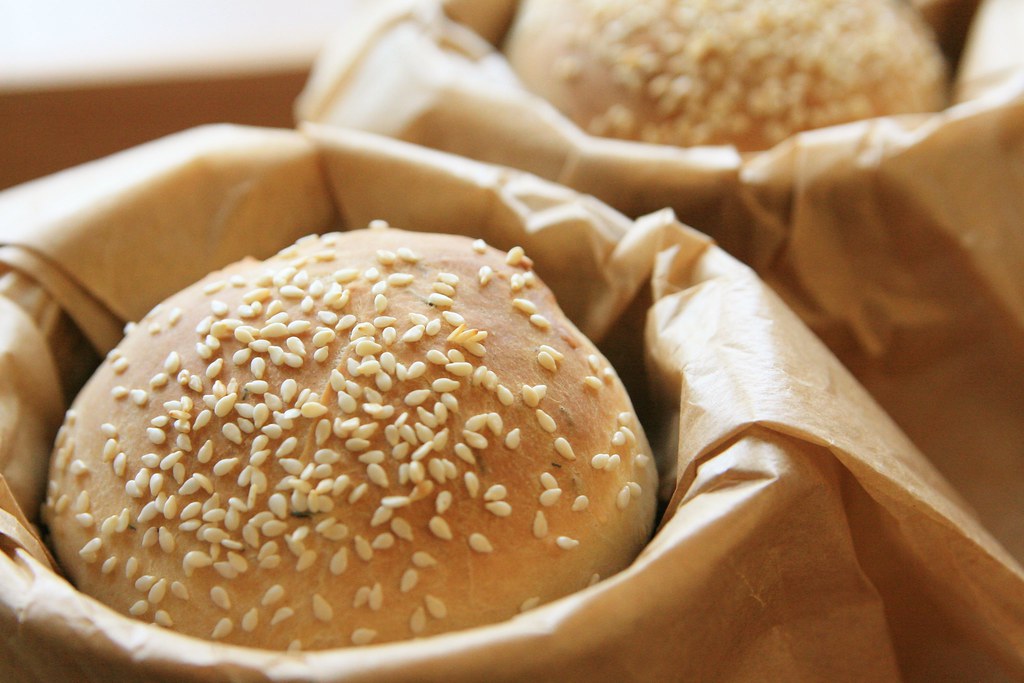 A made a couple of little additions to my dough, mixing through some thyme and sesame seeds, and I sprinkled a few extra seeds on top for good measure.  It was a nice combo, although I think I'd add more sesame seeds to the dough next time.

I have no idea if Sesame Thyme is actually a good flavour combo or not, but at least for me, it has a little back story.  One evening at home, the man and I were both working and I got up to make yet another cup of tea.  I asked him if he fancied a tea or a coffee and he thought about it and decided that he'd like a surprise.

OK, I responded, a surprise then.  How about a glass of water?

The man replied that in fact water was exactly what he wanted, and never mind the tea or coffee.

Well I was having none of that.  So I pointed out that a surprise would be more fun, but that he now can't have water, because it's not very surprising.  I am obviously quite wearing after a while, but the man is pretty patient, and he simply grinned and said a surprise would be fine.

And that's exactly what he got.  A surprise.  Which was a glass of water mixed with thyme and sesame seeds.

The man gamely tried a sip, and pronounced it unpleasant.  But he agreed it was surprising. I then also tried some, mainly out of curiosity rather than any great hope that it would be yummy.  And it wasn't.  So I got him a glass of water and drank my tea.

I like surprises, but I also like things to be delicious.  The point of all this was that Sesame Thyme is now a flavour that I will forever associate with a ridiculous evening's tea break when we drank bits of dried herbs bobbing depressingly in a glass of sesame seeds. And when we laughed ever such a lot. 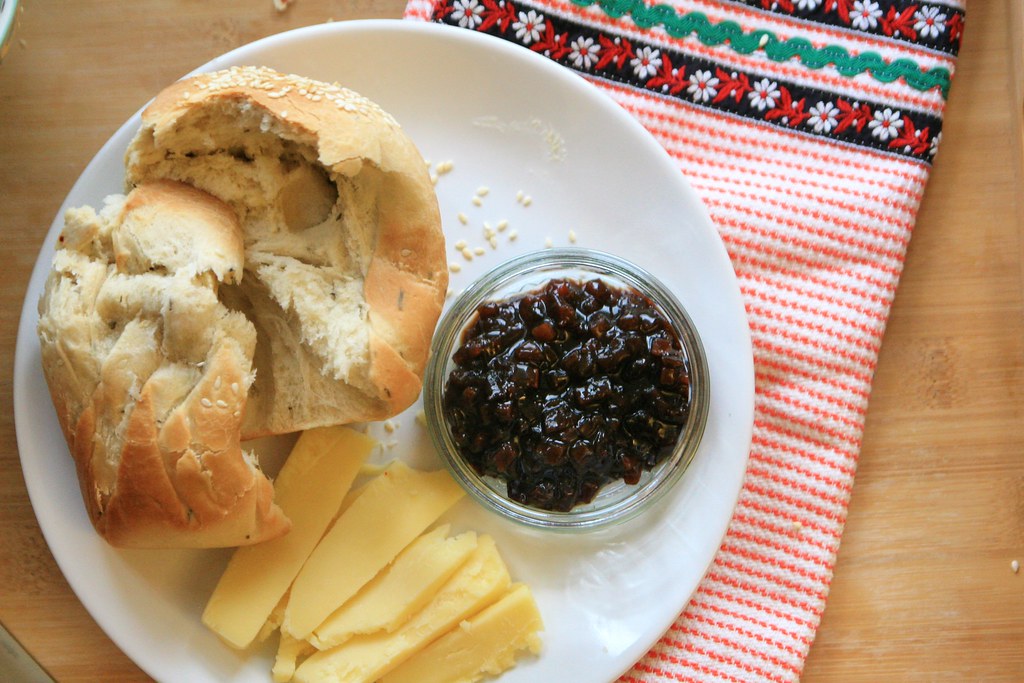 And back to the bread. I dished up this bad boy still warm from the oven with a healthy dollop of Branston pickle and wedges of Applewood smoked cheddar.  Because YUM.  The man and I gobbled it up pretty quickly and it made a charming lunch.  How can anyone resist the aroma and flavour of warm, fresh bread?  It felt pretty festive to be sitting round our brand new tree, candle lit, rain crashing down outside while we were warm within, and treats for the oven ready and waiting. 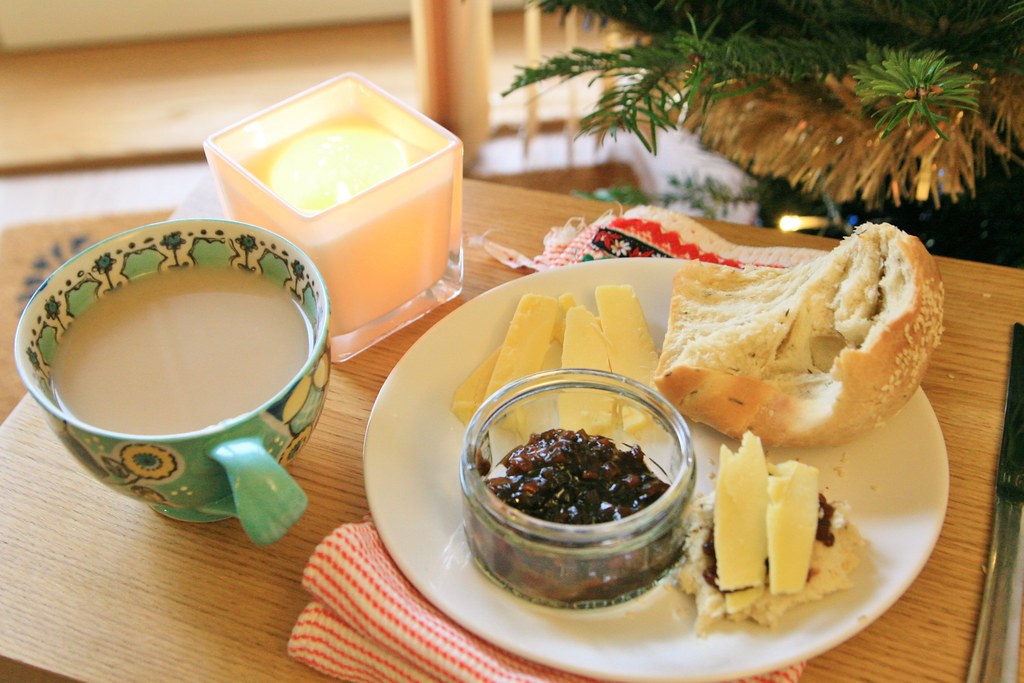 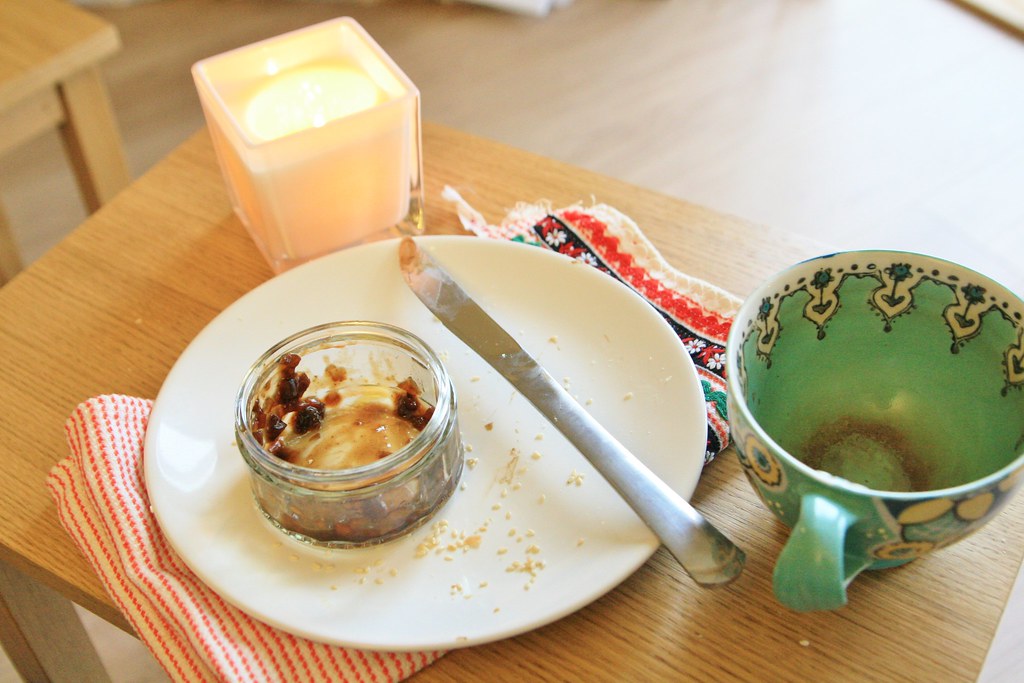 P.S. This blog post is one of my festive series as part of Shimelle's class Journal Your Christmas, capturing the magic and memories of Christmas.
Posted by Miss Smith at 06:30