2nd December: Crafting an Advent Calendar with a Twist 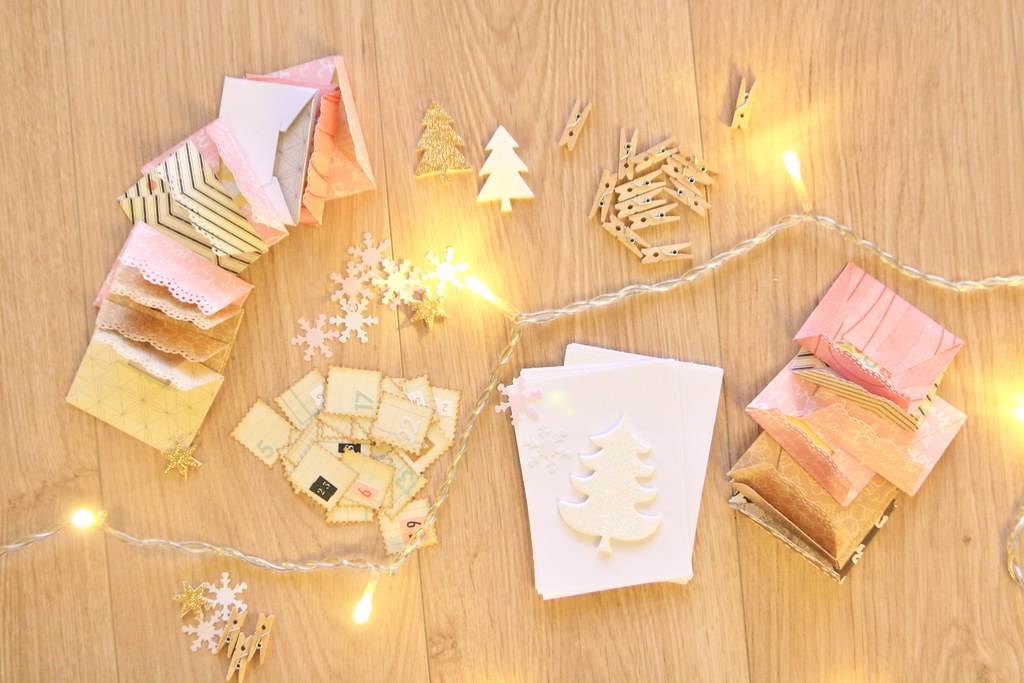 It's been a few years since I had an Advent Calendar and so this year, I suggested to an artistic friend that we both make one, and swap.  To my excitement, she agreed! And so my calendar was sorted.

All that was left to do was make one for her in return.

I wanted to make something that would be a little bit different, and so I put together a series of envelopes, each containing a little bit of story and a choice. Once my friend has made her choice, that gives her a codeword which she must solve, and work out which little gift box to open containing her little daily gift, nibble or treat.  Plus information on which envelop to open next.

So she won't open her envelopes and boxes in order; it will all depend on which path she chooses to take in her own Christmas story.

And therefore I named her calendar: Choose your own Advent-ture. Because there's nothing I love more that a festive Christmas pun :D 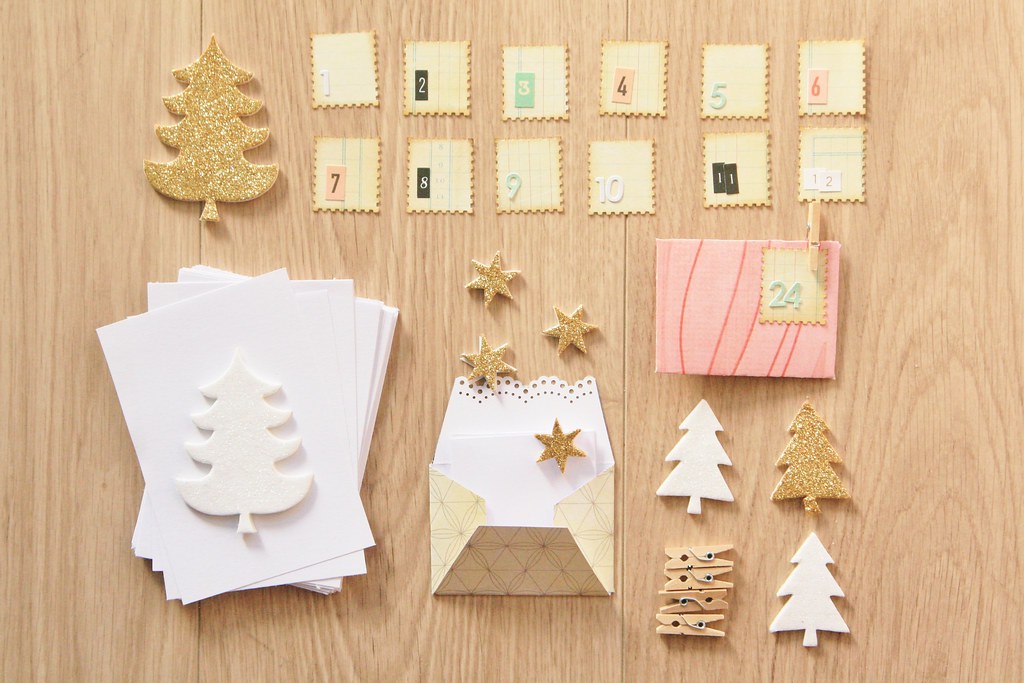 The first thing I needed to do was design and make my little envelopes.  I made a template that seemed to work and gave me the right sort of size, and made a prototype out of patterned paper. I glued down the side and bottom flaps, punched the border of the top for added pretty, and made some numbers out of a punched stamp shape and tiny numeral stickers.  I pegged the envelope closed with the number on the front, just like a stamp, as I didn't want them to be difficult to open. 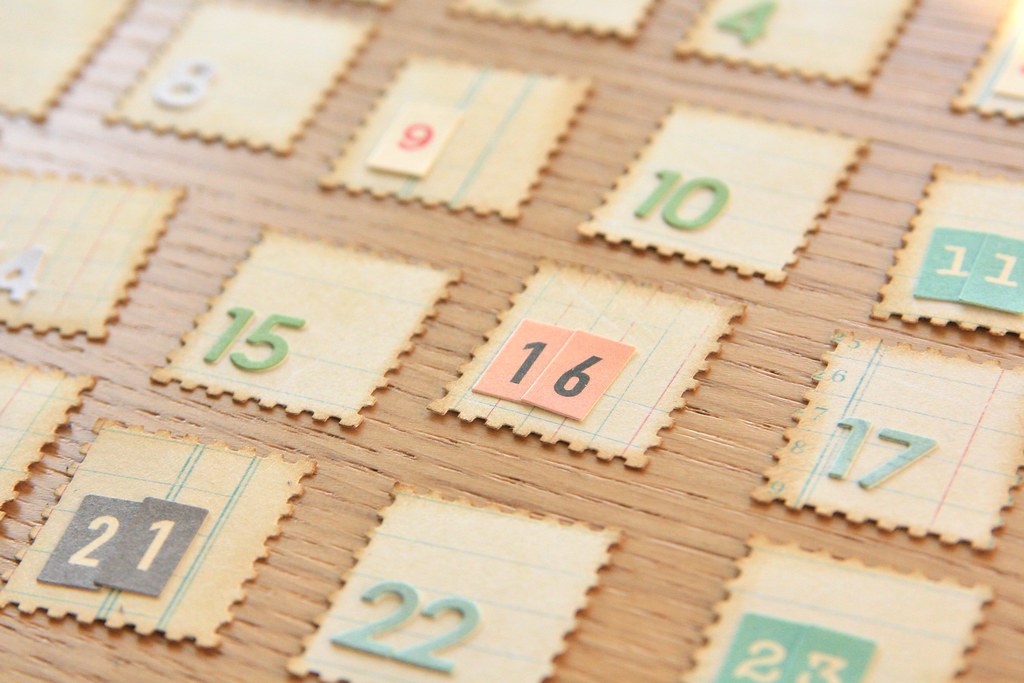 Happy with my design, I set to work making a full set of numbers for the envelopes, inking the edges to make them pop, and mixing up the number stickers.

Actually, I needed more than just numbers in the end.  I needed code words, anagrams and an algorithm... but we'll get to that.

The numbers were a good place to start as I knew I was definitely going to need 24 of them. 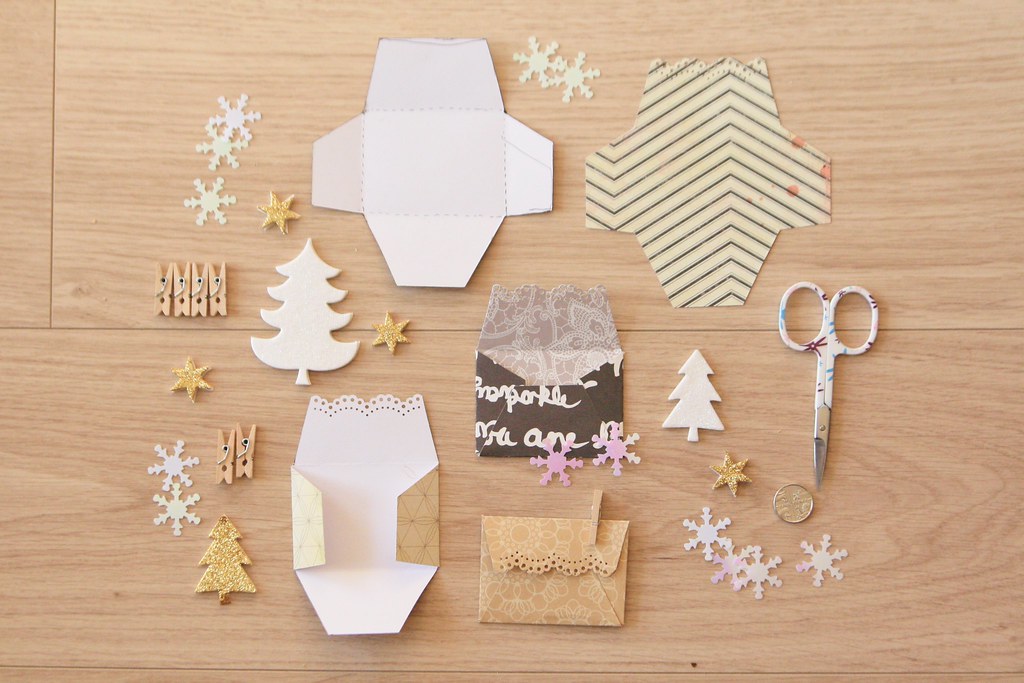 Numbers made, and prototype envelope design sorted, I sat down with pen, paper and notebook, and set to work on thinking about how the choose-your-own-Advent-ture part of the calendar would work.  I may as well confess that I had not anticipated how complicated this would be.  There were a lot of conditions: I wanted my friend to be able to choose which option she preferred each day. But I still needed each envelope to have been opened by the end of Advent.  And she obviously wouldn't be able to open the same envelope twice...

And it came to me: this is exactly why I did a maths degree. 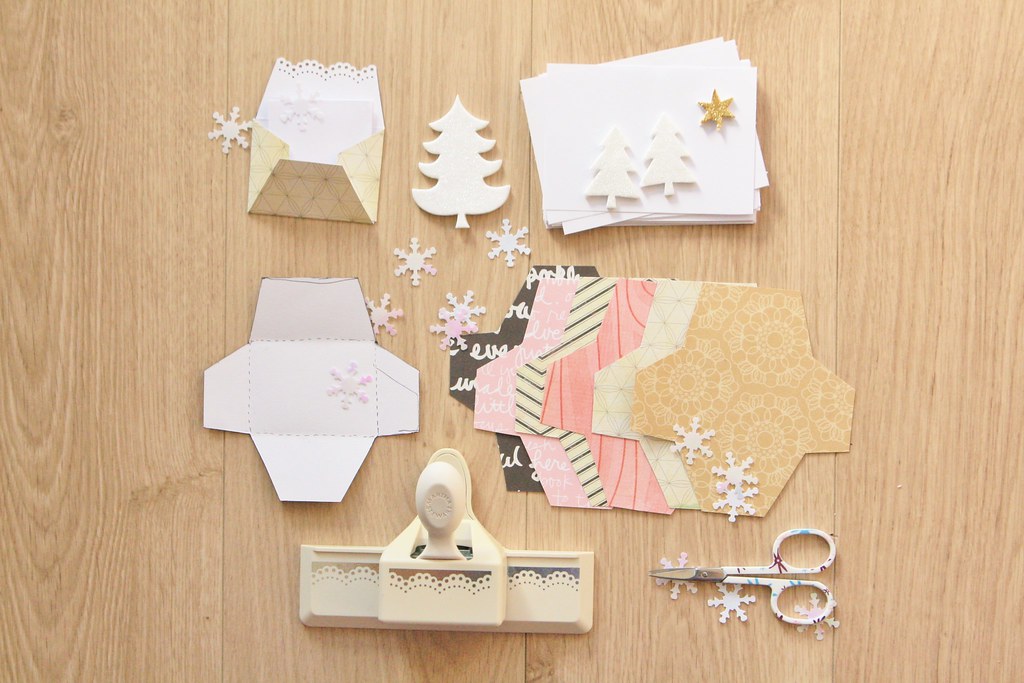 It took me a week to figure the process out, with scraps of paper, notes that trailed me around the house, around my classroom, and eventually down the pub where a different long-suffering friend and mathematician tested it for me.  And it worked!

Time for a celebratory cup of tea!

In case you're wondering how it works, here's what it reads when my friend has opened envelope number 9, which could be...well any time really depending on what she chooses:

With festive music playing softly in the background, everything is cosy and cheery.  But the weather outside is frightful! Well, it's pretty cold at least.  What are you going to do about it?

Envelope 5: Let it snow! I want to put on my mittens and head outside!
Envelope 14: I like to stay indoors and turn up the heating, even if it costs a pretty penny!

Choosing envelope 5 will lead her to one gift box and the next day's choice, but envelope 14 will take her to a different gift box (which I happen to know contains chocolate coins), and a different choice for the following morning. 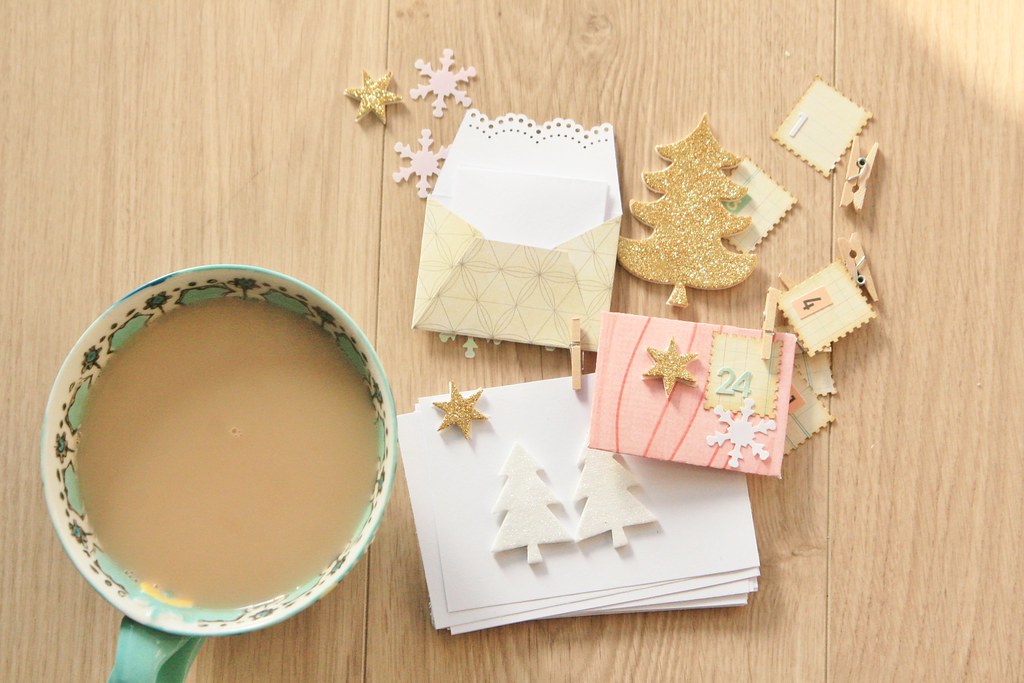 With my choose-your-own algorithm designed, my code-words coded, and little gift boxes ordered for the daily gift (I decided not to make these, and just decorated kraft-coloured boxes instead), it was time to go into mass envelope production.

I traced my template onto several different matching patterned papers, and spent an enjoyable afternoon with a candle flickering, a DVD entertaining me, and many a cup of tea on tap.  And every so often, I would pause to arrange the pretty things into nice patterns and take pictures.  It made me feel Christmassy! 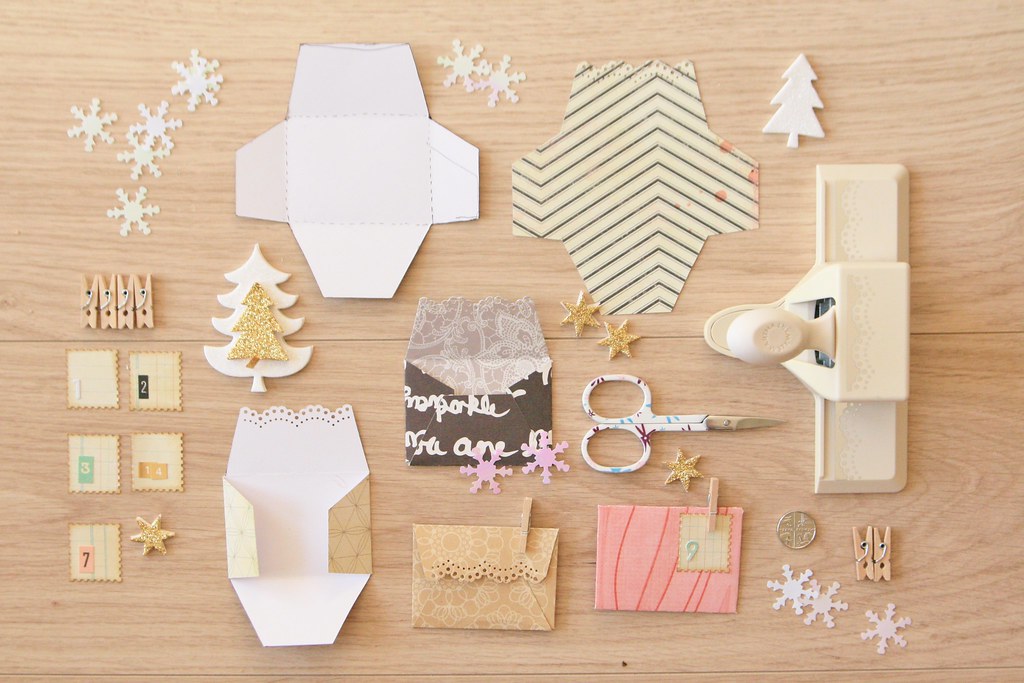 And finally, it was all ready.  We exchanged calendars at the end of November.  We were both a bit nervous with anticipation as we both had no idea what to expect.  I hope very much she likes it.  After all, nothing says festive like an Advent calendar that comes with a long list of instructions so that you understand how to work it properly.

I actually made a couple of Advent calendars in the end, the second for a friend that I thought might enjoy it, and it's an idea I would use again.  I was tempted to put the instructions and sequence of choose-your-own options together as a pdf file for download, but ran out of time as I was cutting it a bit fine! Perhaps next year. 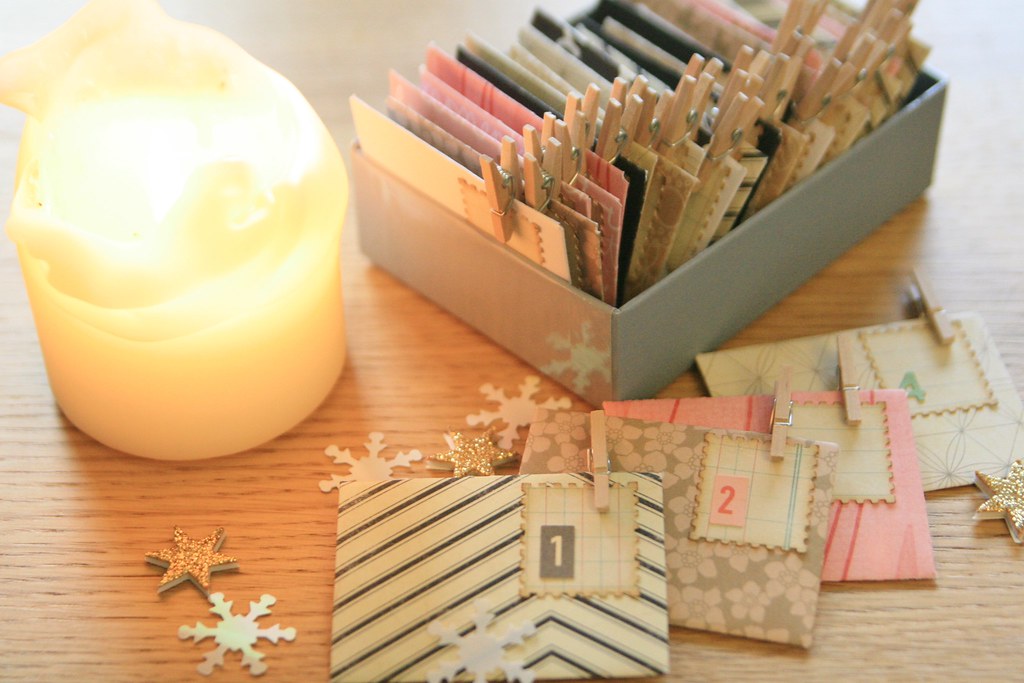 And so here they are: sealed and ready to reveal their Advent secrets. 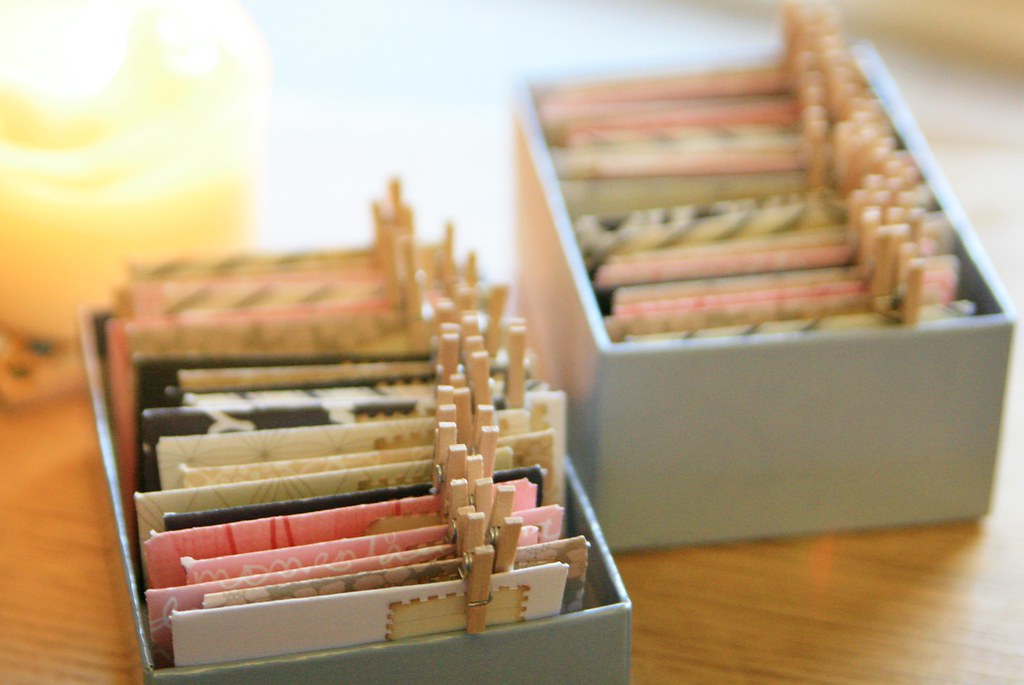 As crafty projects go, this was fun!  And you should see the wonderful Advent calendar I got in return - it's genius!

P.S. This post forms part of my blog-based Journal Your Christmas, a class run by Shimelle to recapture the season and make lovely memories.  And in the interests of doing just that, I will be heading off to the ballet tonight, to see Romeo and Juliet at the Royal Opera House.  Exciting!
Posted by Miss Smith at 06:30