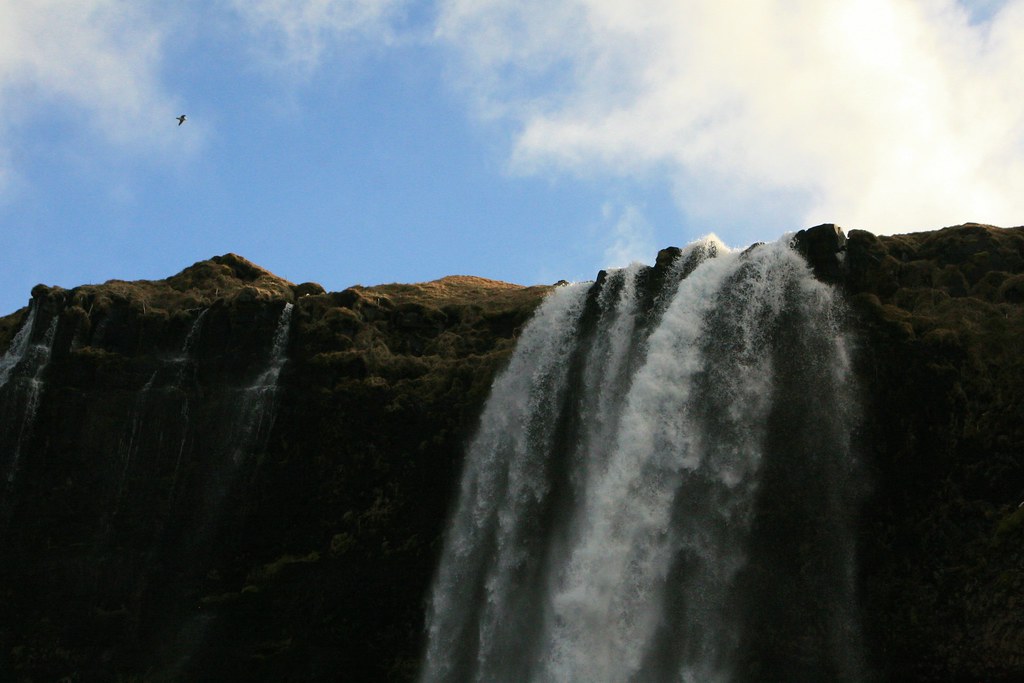 During the Easter holiday, a group of 14 Senior Section members and Leaders from Girlguiding Middlesex East set out to explore Iceland.  And this is the story of the day we climbed behind a waterfall... 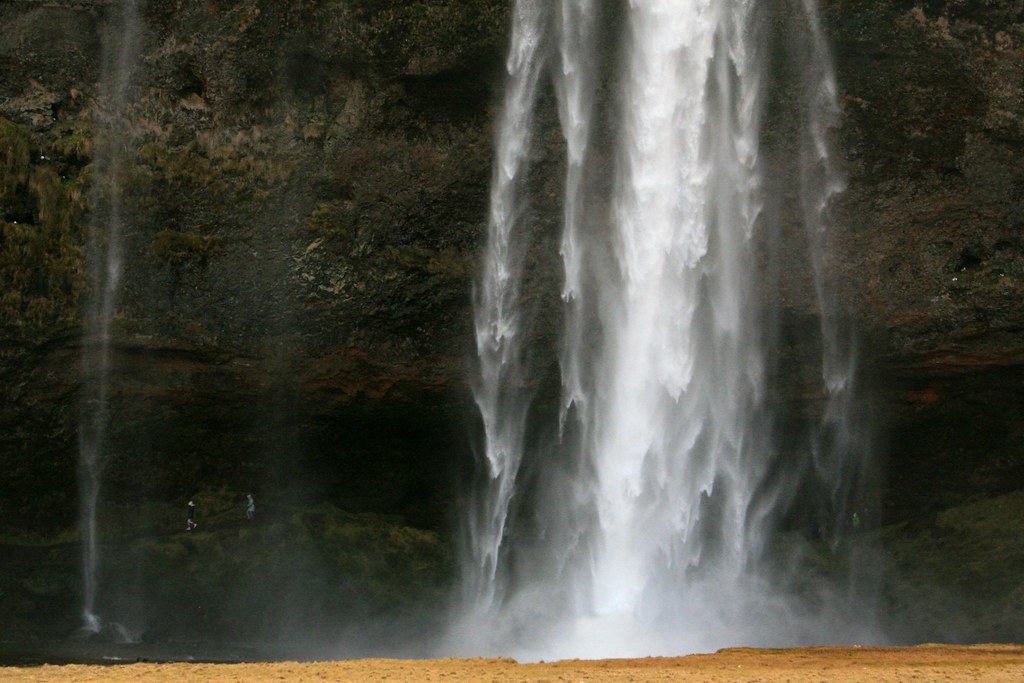 I think Iceland as a country exceeded all our expectations. It's a spectacular and beautiful landscape and it feels like every turn in the road reveals a new and breath-taking scene.  One morning found us paying a visit to the Seljalandsfoss waterfall: a huge cascade that seems to appear from nowhere, flying out from over the top of a cliff and crashing into the lagoon below. The water was always white and churning and the spray was everywhere.
This particular waterfall had a secret though.  And as we narrowed our gazes and tried to peer beyond the curtain of water, we could make out a rift in the cliff face: a natural break in the rock forming a path big enough to walk on behind the waterfall. 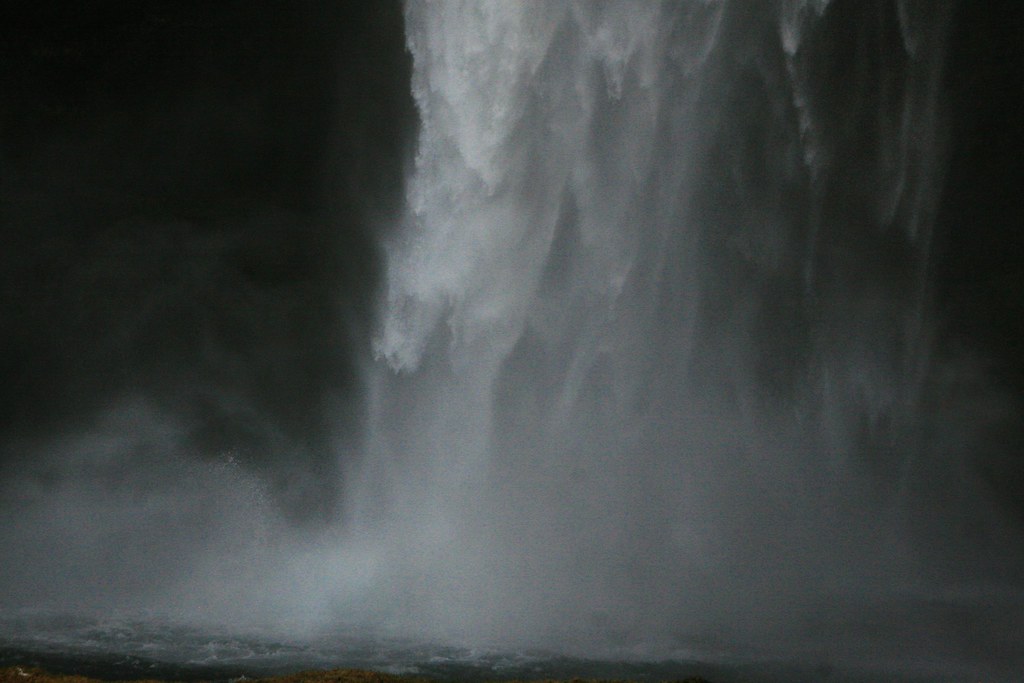 You don't need to tell us twice!  And so began a slightly slippery scramble over slick, wet rocks to venture forth beyond the cascade.  Making stops for photos, of course.
Being members of Girlguiding, we are naturally prepared for pretty much anything.  But sadly, given that it was a cold but clear day, we had left our waterproofs on the bus.  Our hoodies were left to the job of keeping the spray at bay.
We were drenched. 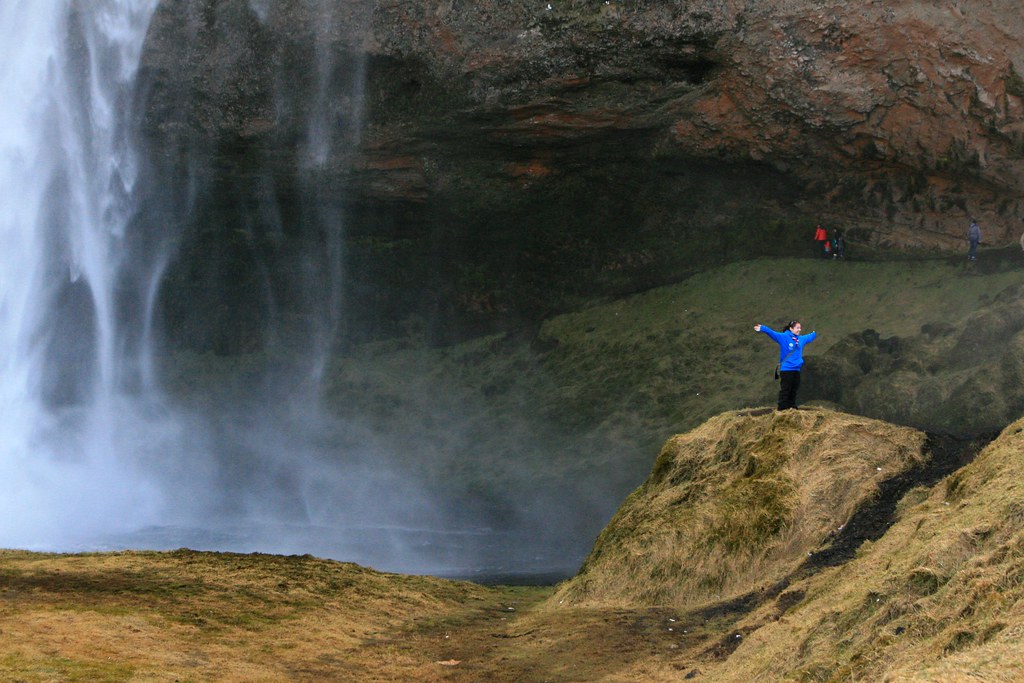 Drenched through and through.  But the beaming faces as we got nearer to our goal proved that nobody cared!  The roar of the water became louder and fiercer and our intrepid little band tottered behind the falls. 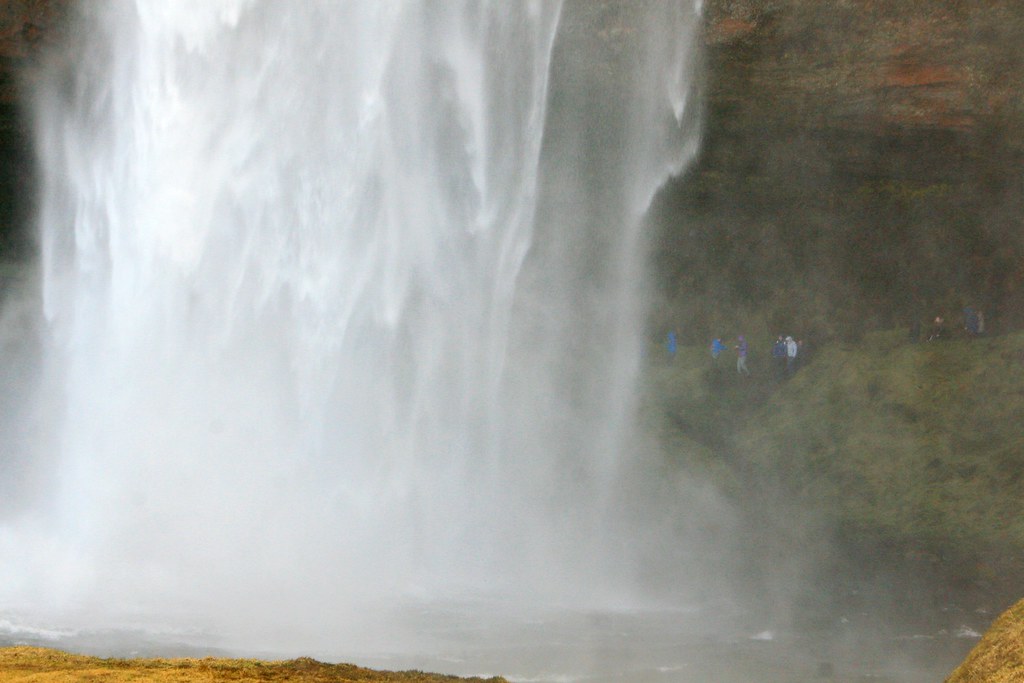 I hung back with my camera, and shrieks of delight reassured me that all was well.  If you can make out little blue blobs in the photo above, they're our girls, standing in a crevasse in a cliff while a giant waterfall pounds down above them.  Pretty cool!
At this point, I joined the group and the constant stream of water flying up from the rocks proved too much for my camera lens. And fair enough: it was dripping wet.  But it was an amazing experience standing behind the cascade, peering through the water, being deafened by the noise and watching our Senior Section scale the rocks up the other side with frozen fingers and enormous smiles. 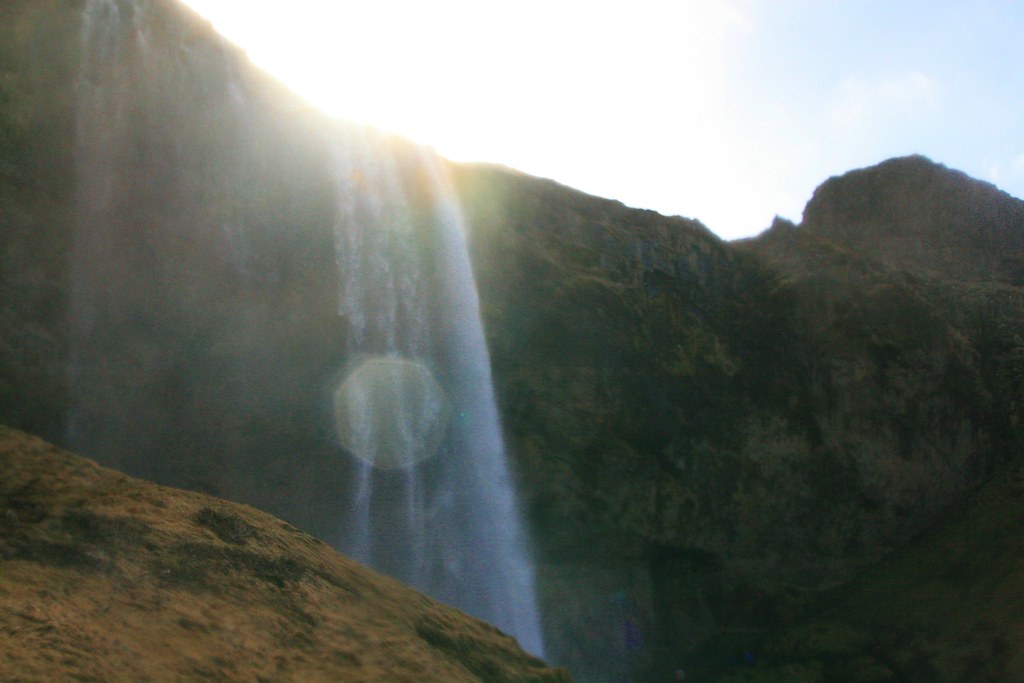 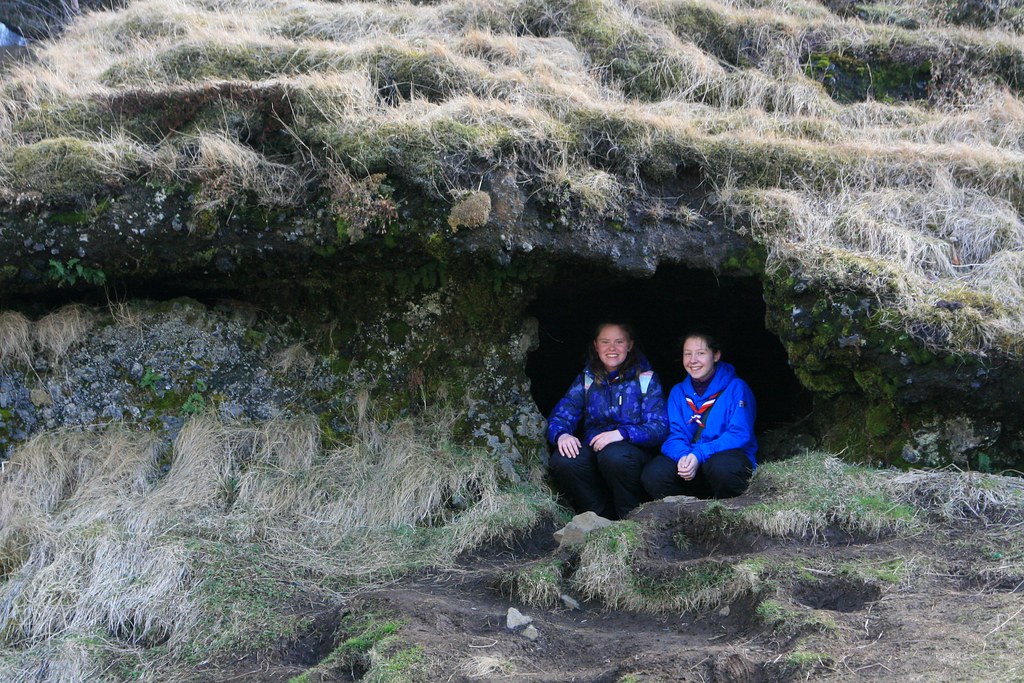 A short walk produced another couple of waterfalls for us to view, and a small cave.  Two of the girls attempted to move in, but I think the lack of facilities would have frustrated them after a while so we hauled them out and made them come home.
The final waterfall was concealed in a canyon and just visible through a gap between the canyon walls.  To get to it demanded wading through the river, so we had to give it a miss, but it was beautiful to catch a glimpse of the waters between walls of sheer rock.﻿ 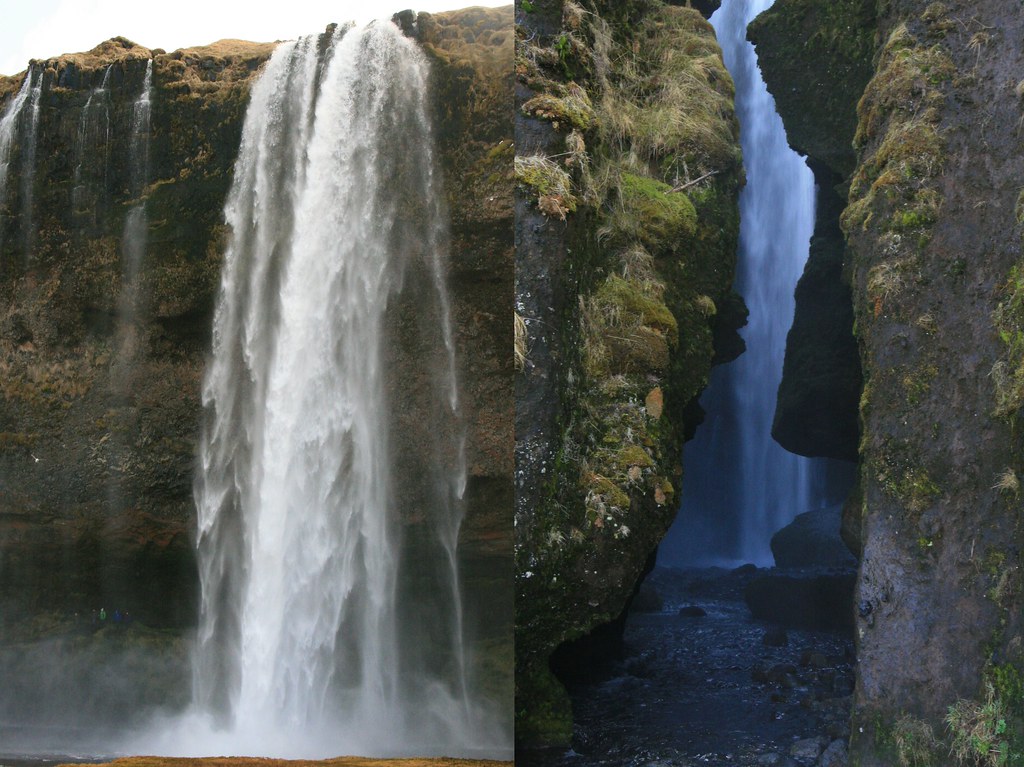