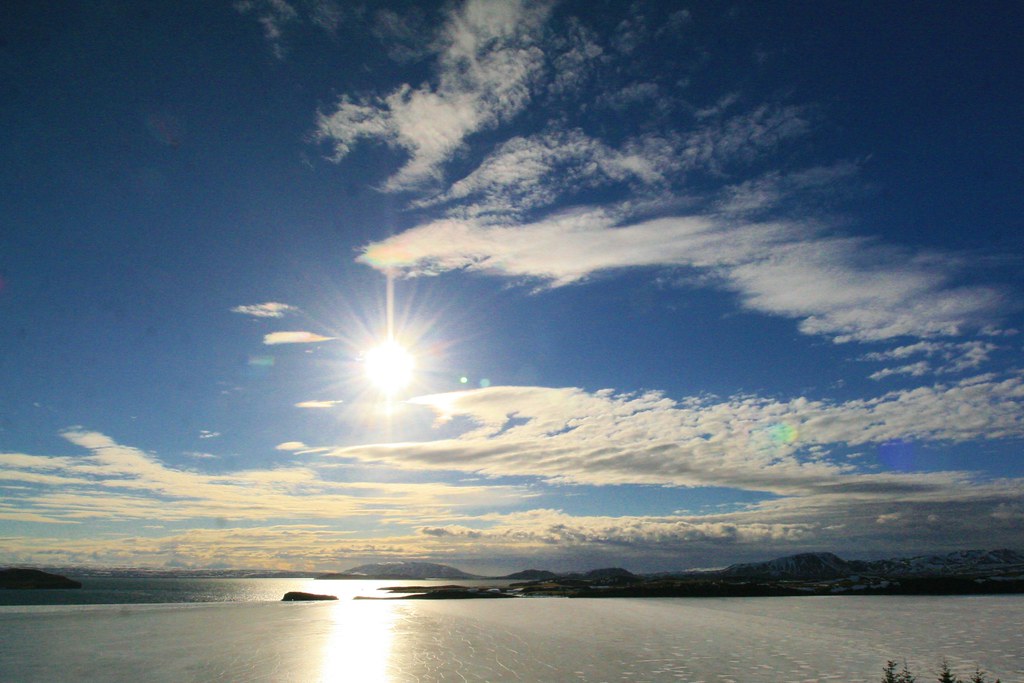 One of the highlights of our Girlguiding Middlesex East County trip to Iceland was a tour of the country's famous Golden Circle.  This is a popular tourist route that allowed us to see some of the amazing landscapes and sights that Iceland has to offer.  And so after hearty breakfast of warm, cinnamon porridge and freshly baked bread, we packed ourselves into the minibus and set off!  Two of the girls opted to sit up with our driver, Gunnar, who patiently allowed them to use the bus microphone to commentate on any and all aspects of the journey. Which proved...generous.
We made our first stop by a frozen lake, not because it's one of the sights we had set out to visit, but because it was simply too beautiful not to.  It's astonishing that vistas such as this are relatively commonplace, but as we were all admiring the view, Gunnar pulled up and let us jump out of the bus to admire the prospect.﻿ 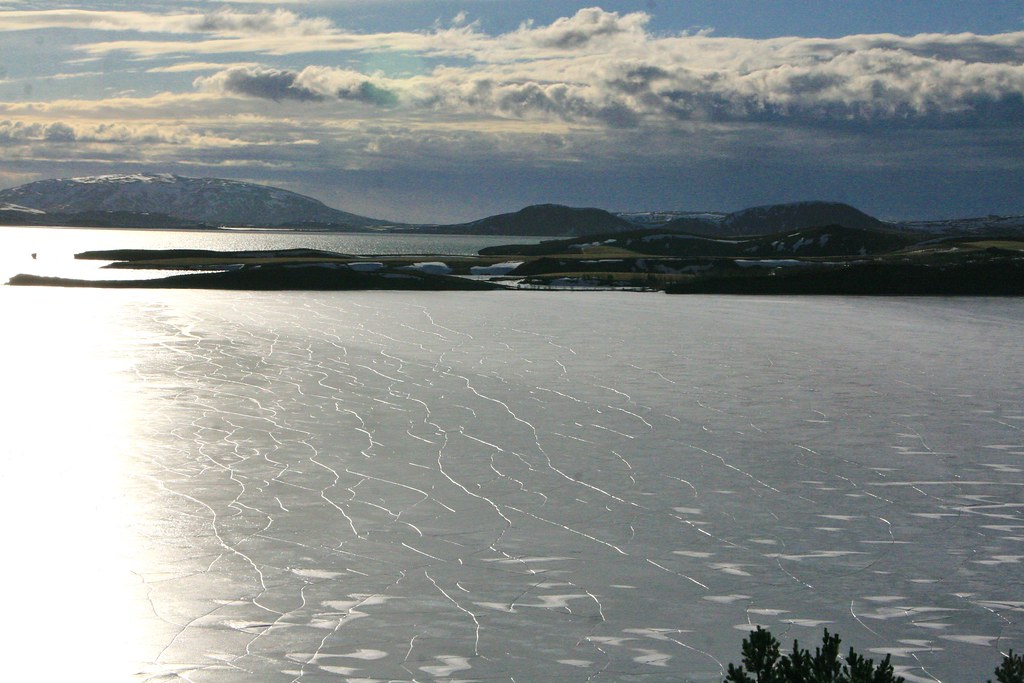 By April, the Icelandic winter is coming to an end, and the lake ice cracks and drifts off, melting back into water. We were lucky to see it in this half-way state. Jumping back in the minibus, the Senior Section commentary continued, pointing out a sign that said be careful of sheep (after looking around for some time, we had to admit that we couldn't actually see any sheep to be careful of), updating us on the weather, and snippets of the Matilda soundtrack, sung from memory. All fine until the following conversation ensued between our Commentator Extraordinaire, and the driver, although we couldn't hear what poor Gunnar was saying as he didn't have a mic...
Commentator: What does the sign mean?
Driver: *mumble mumble*
Commentator: Ah! OK, cool.
Everyone else: What did he say?
Commentator: Those signs give the recommended speed limit for the road you're on.  Right now, the recommended speed limit is 40.  And we are doing...65.
Cue the leaders putting heads in hands and trying not to laugh. Poor Gunnar indeed. 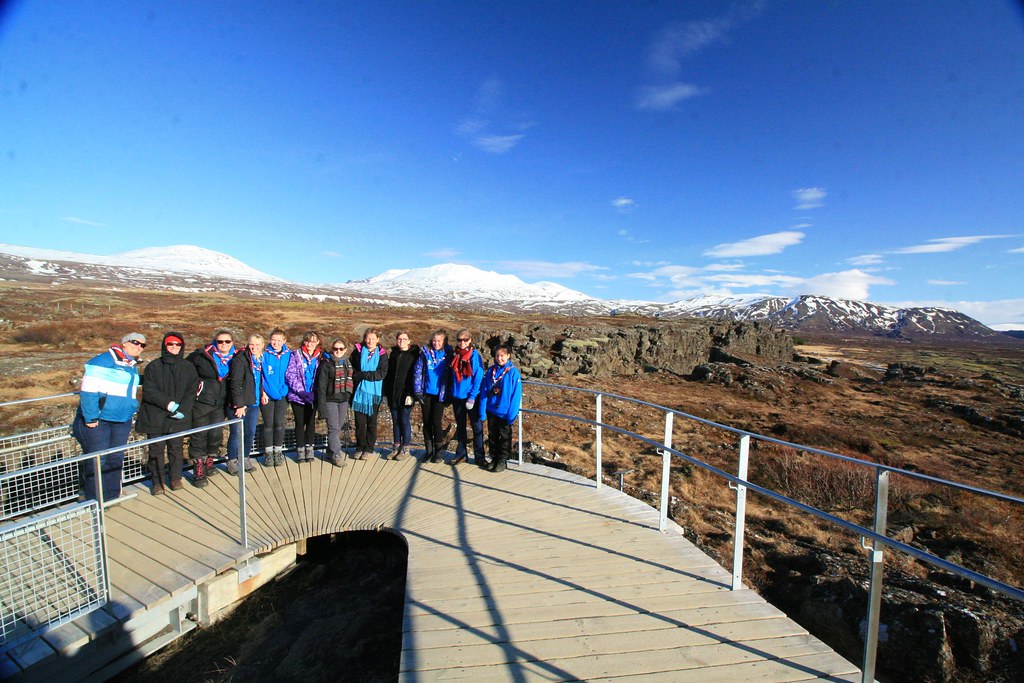 Our first official stop was at Pingvellir: the site of Iceland's original parliament.  In many ways, this is the site of very early democracy in action, as people would gather here annually to hear the laws read out from the law rock (down the canyon behind us), and anyone was permitted to stand on the law rock and address the assembled crowds.  Iceland is the home of the oldest, continuous parliament in the world, and it was impressive to see where it all began.﻿ 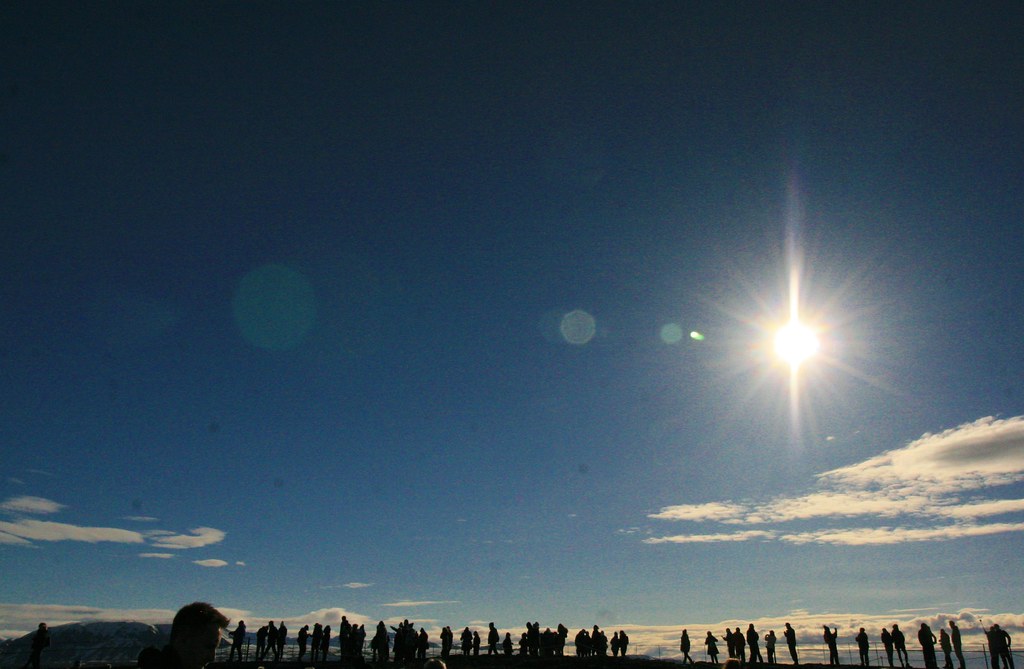 The views were wonderful and we enjoyed walking down between the canyon walls.   And stopping for our compulsory group photo. 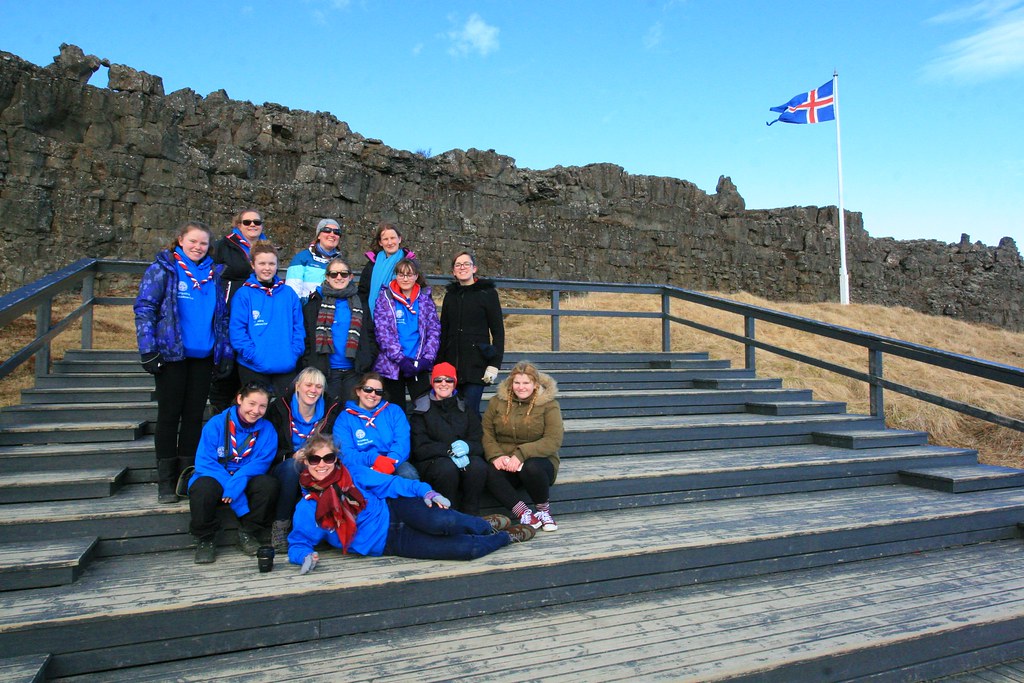 ﻿
Once we'd explored the site, Gunnar led us on to visit a waterfall which was really quite beautiful.  Or, as he described it "it's OK, if you like waterfalls".  ﻿ 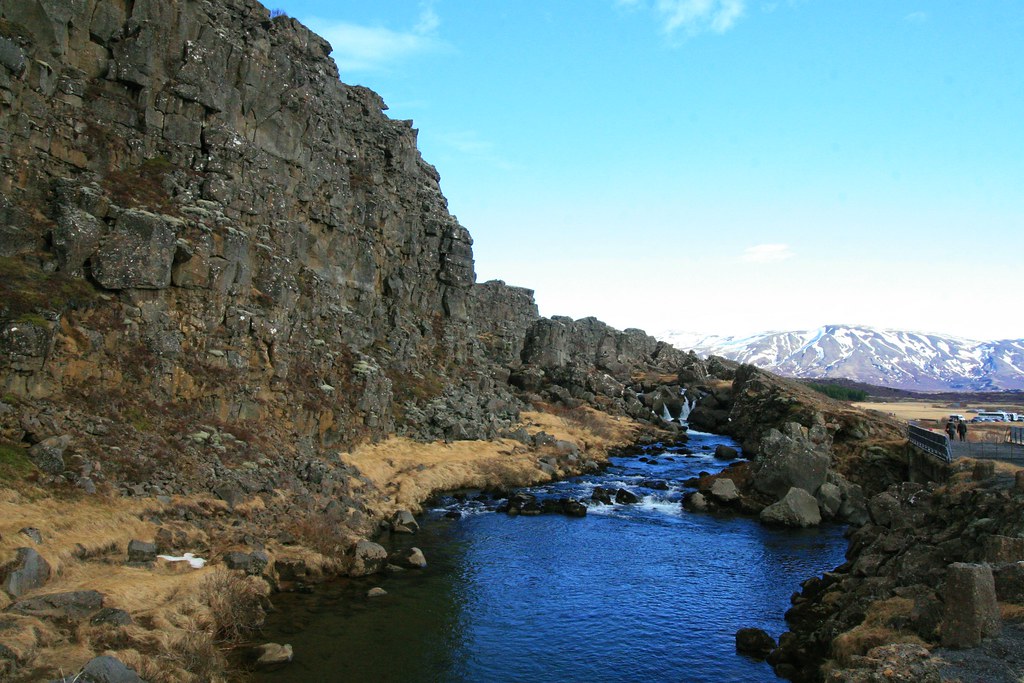 Our walk took us past a pool that, in the past, was specifically reserved for drowning "bad women" (men weren't drowned, they were banished) and we came across a pool that is so clear, it's regularly used for underwater filming. We tossed pennies in the water for luck, which is something you aren't allowed to do elsewhere in the country.﻿ 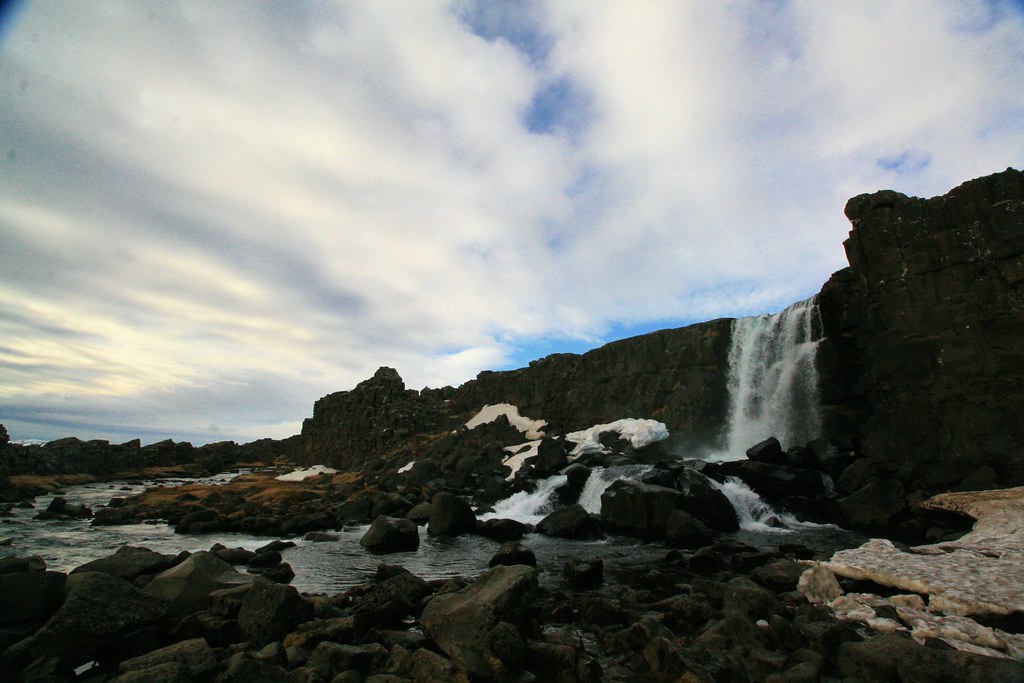 The waterfall was lovely, and therefore it was photo time again.
﻿ 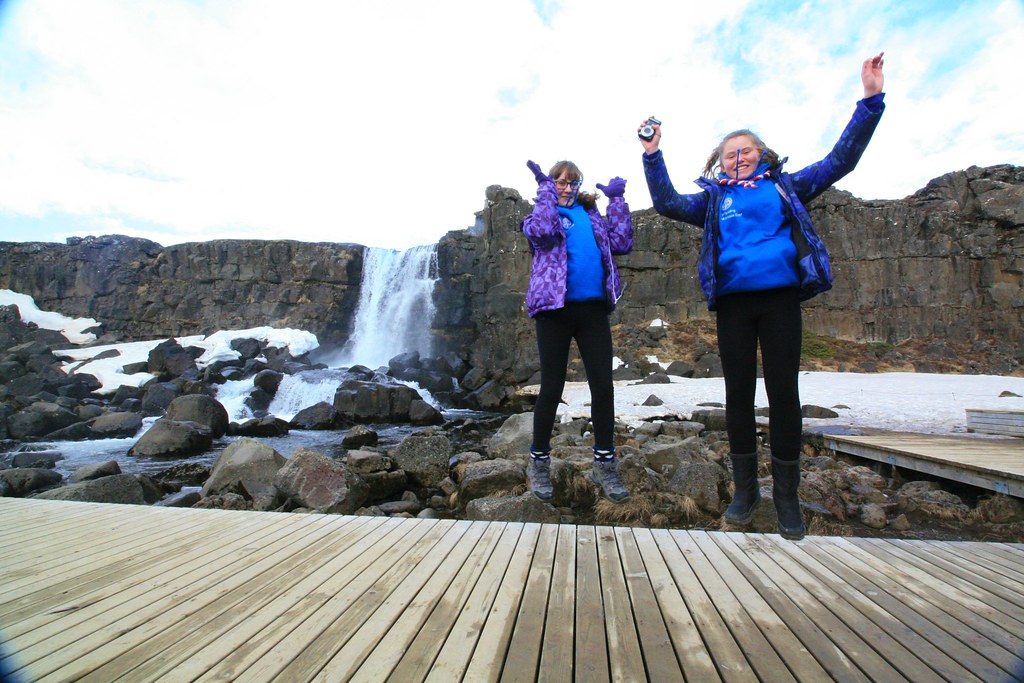 After our visit to Pingvellir, we hopped back into the bus and set off for our next stop: Gulfoss. If you're only going to visit one waterfall in Iceland, this is probably the one you should see.  It's huge, it's loud, it's powerful and overall pretty amazing!﻿ 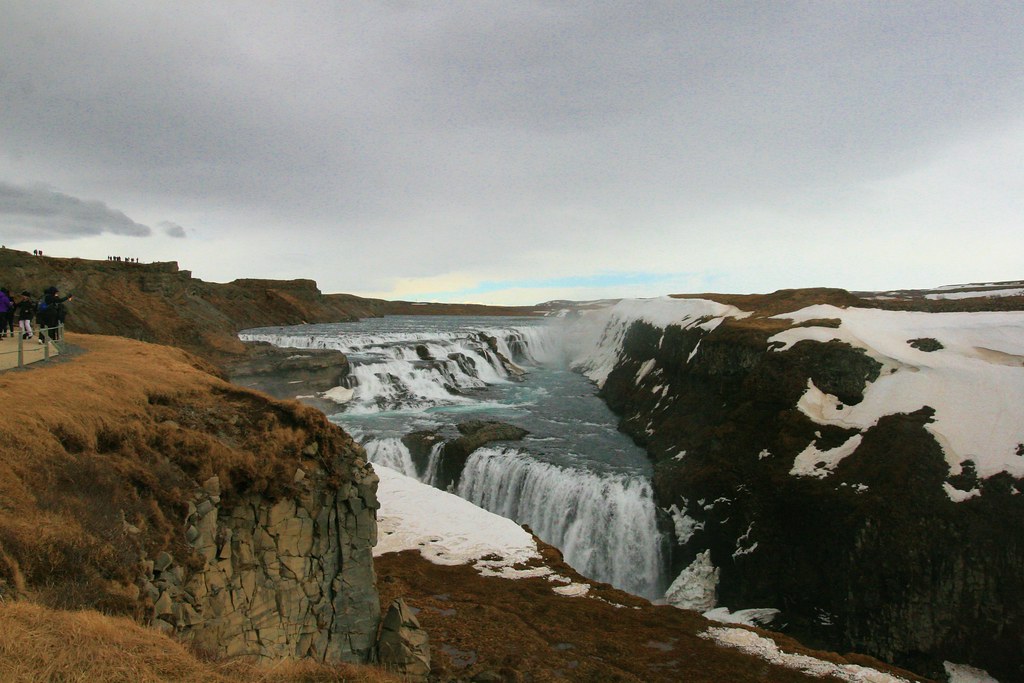 The water cascades through the canyon in two tiers, the upper a miniscule 11m, and the lower a mere 21m. Yep, it's pretty tall.  The sky darkened ominously and the wind was definitely getting through our coats, but the views along the top of the Hvita canyon were worth a spot of inclement weather!﻿
﻿ 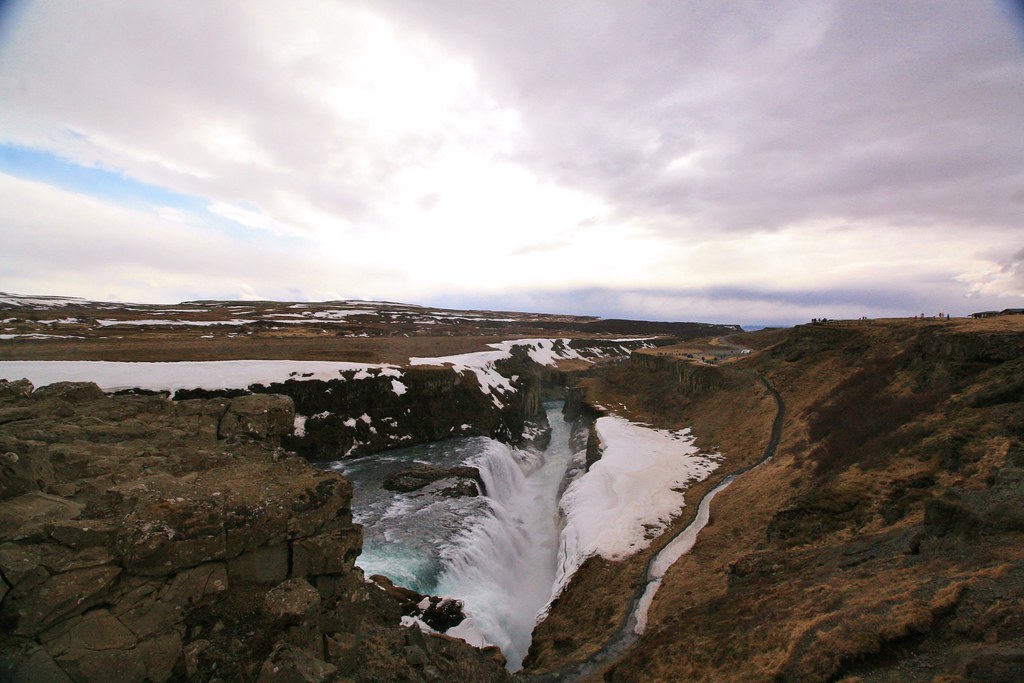 We bumped into a school group while there, who had inconveniently chosen the same colour hoody as our group.  So after some confusion in sorting out which teenagers belong to us, we scooped the girls into the bus (after a quick gift-shop stop for badges) and hit the road.﻿ 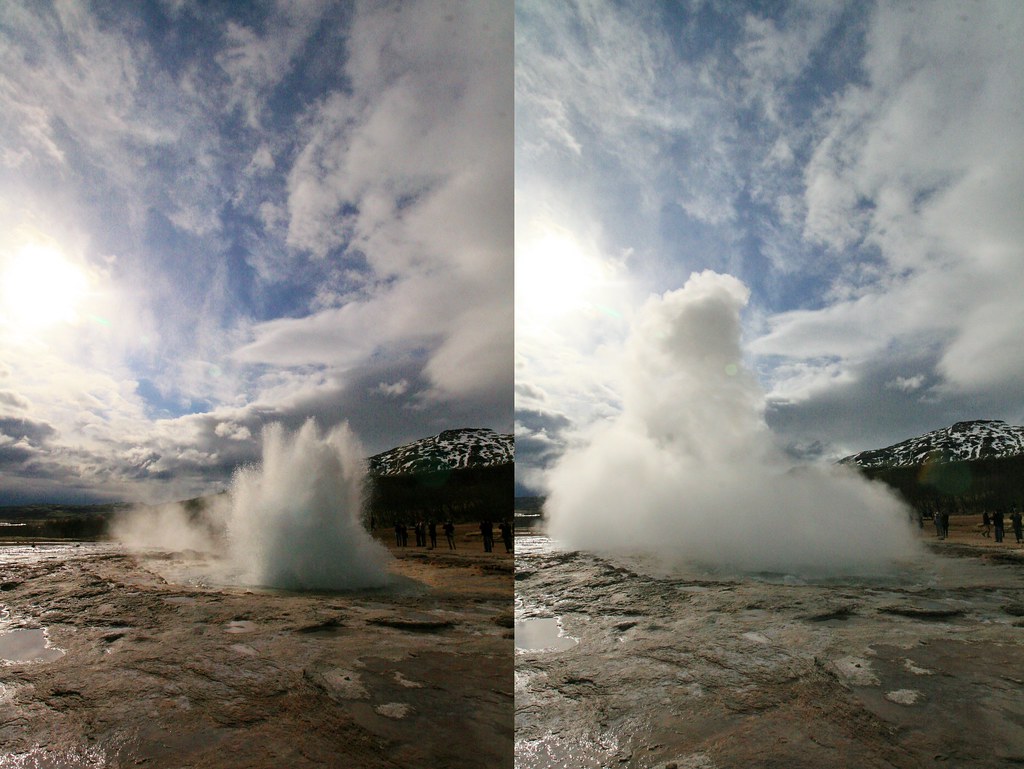 I've got to confess I was quite excited to reach our next stop: a visit to see some active geysers!  There are several in this area due to the sheer quantity of thermal activity, and the volcanic landscape, but the most impressive was Strokker.  This geyser goes off every ten minutes or so and jets of warm water shoot up in the air. Waiting for it was tense as the pressure builds up underground, and each time it exploded into life, the assembled group couldn't help but exclaim in ooohs and ahhhhhs. Splooosh! We watched it several times, including once where it went off twice in a row.﻿ 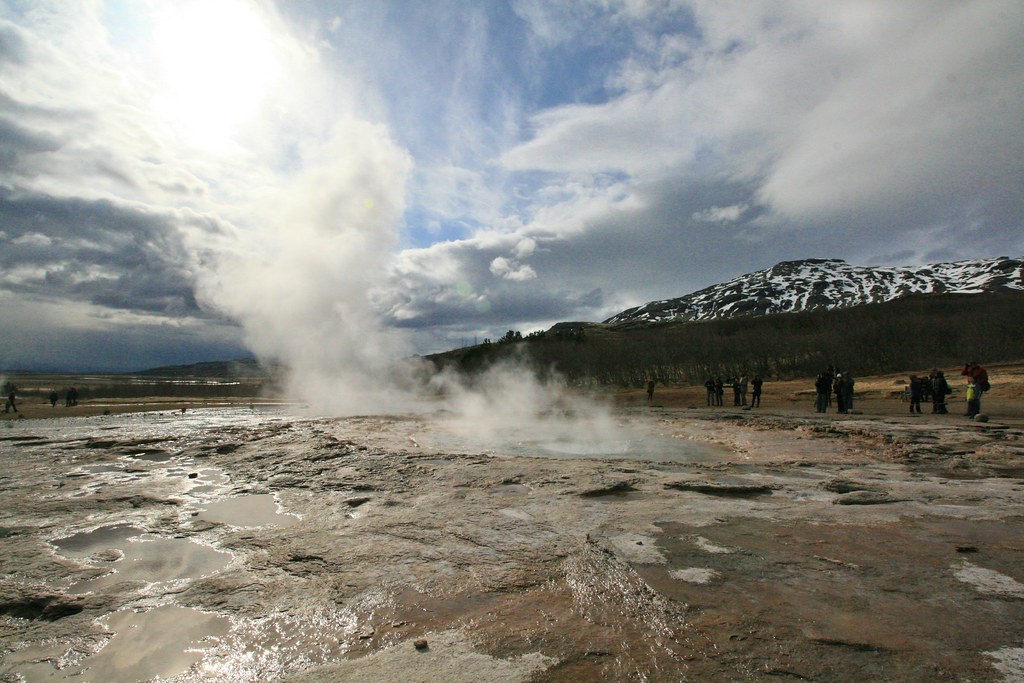 Steam drifted around the plateau and we saw lots of little tiny lagoons in all sorts of shades of blue and aqua quietly smoking away.﻿ 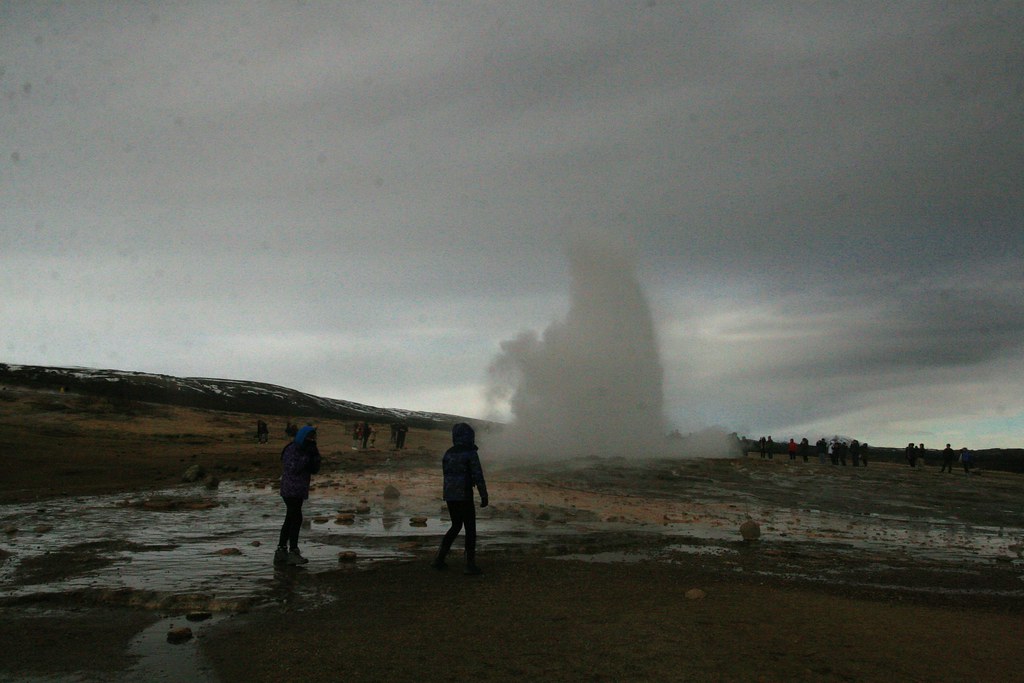 The Senior Section wanted to know if they could stand downwind of the geyser so that when it exploded, they would be under it. I said I didn't mind, if they didn't mind getting wet.
﻿ 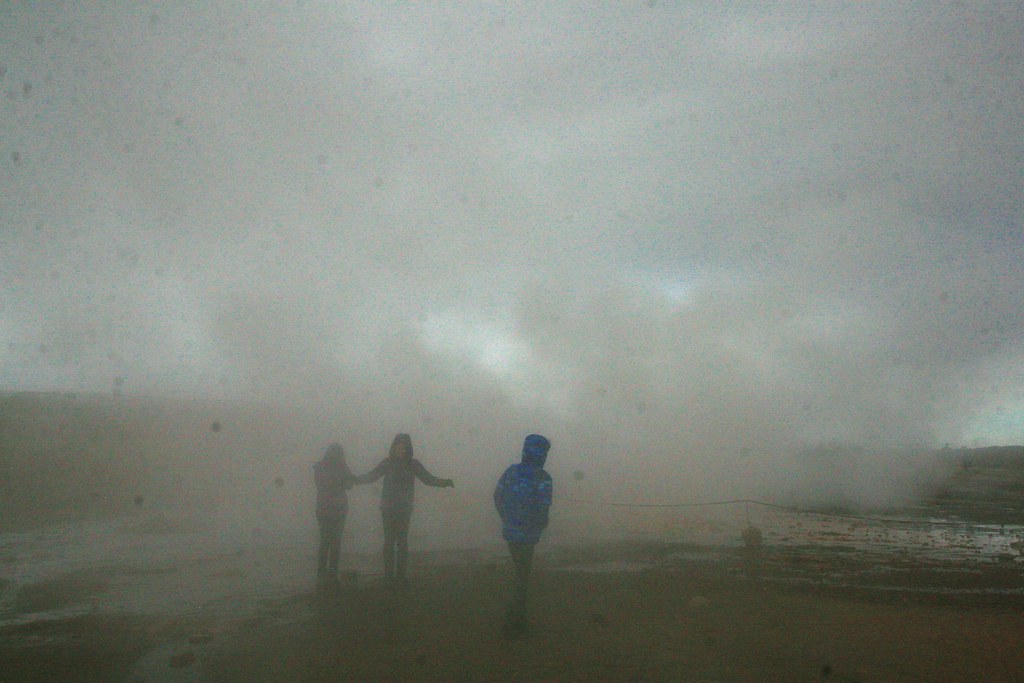 They got wet.
Fortunately our final stop of the day was at the Fontana baths for a swim in the thermal pools. The water was so warm and lovely, and after a day of chilly fingers, and being buffeted about in the wind, the sun shone gently and we could bask in the pools under the sky. A cup of tea and a piece of cake freshly baked from our stellar campsite chefs didn't hurt either!
That was the end of that particular day, but I have one more experience to share: a visit to some Icelandic Horse Theatre.  If you see the expression 'horse theatre' and don't really know what to expect, then you're in the same position I was in.  But one evening we paid a visit to get a bite to eat and catch the 7:00pm show. 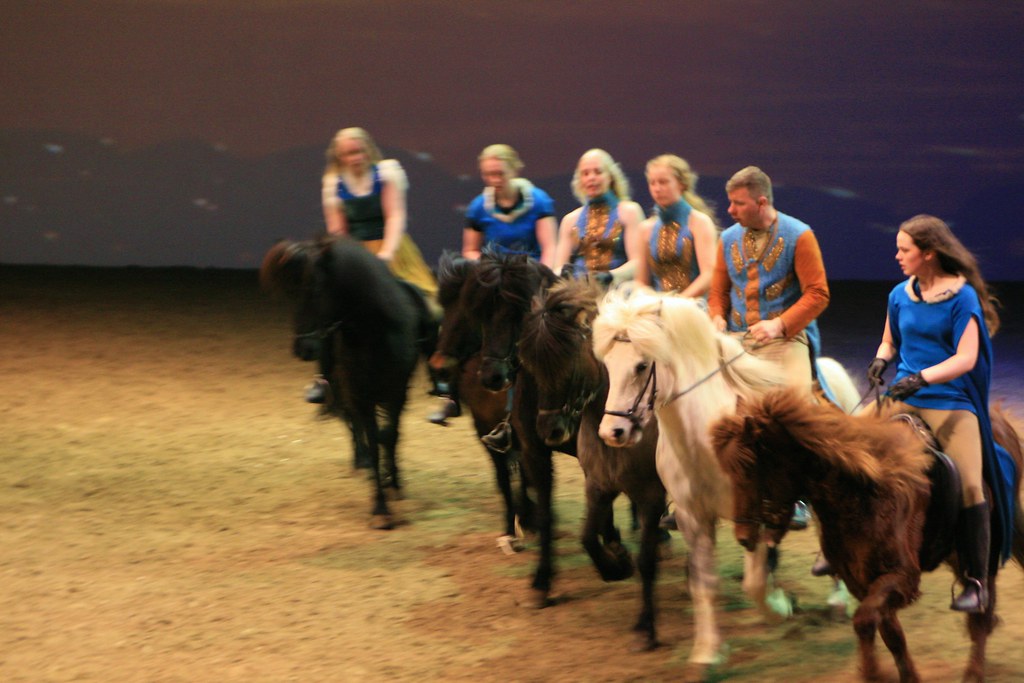 Icelanders are justifiably proud of their horses (never ponies, apparently) as they are hardy, happily facing up to harsh winters, they can pull huge loads relative to their size, and they have a range of unique, very smooth, gaits. The breed has been isolated for so long that Iceland don't import any horses into the country at all, as there are concerns that the breed won't have the same immunities and that infection could spread wildly. The horses are raced in their special gait, the tolt, and it seems almost everyone rides.
Horse theatre turned out to be a show combining horsemanship, mythology and a history of the Icelandic horse told through video and theatre with a cast of 30 horses, 10 humans and a dog.  After the show, which was great, we were invited backstage to meet the cast.﻿
﻿ 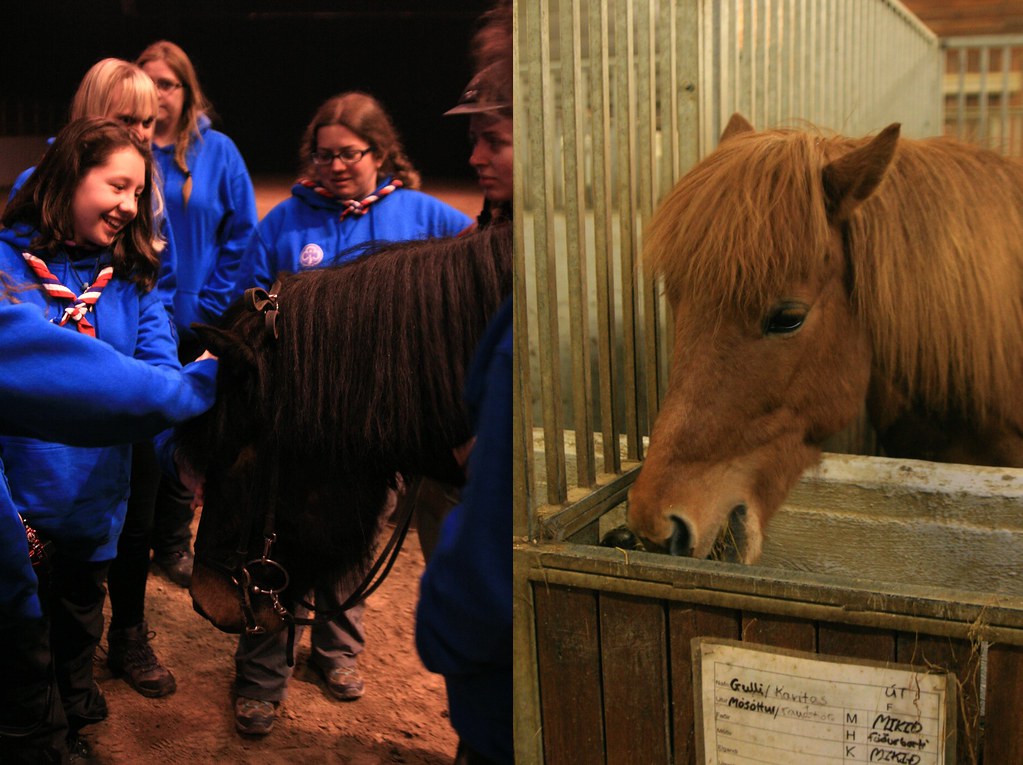 The horses were very chilled and quite happy to have their soft noses and ears stroked and petted.  Hard life!
﻿ 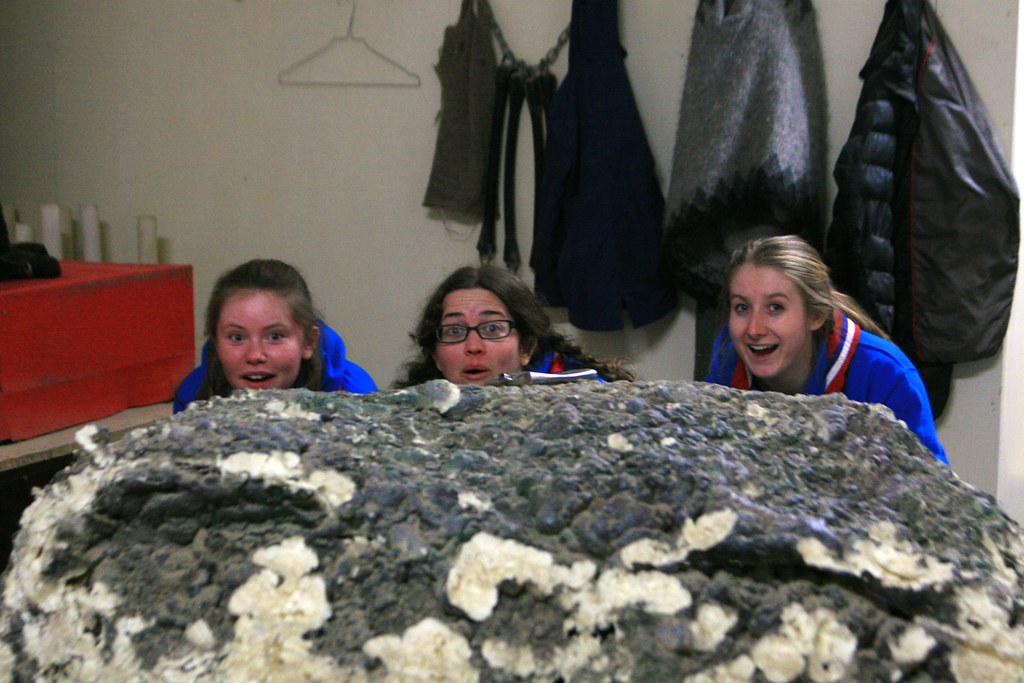