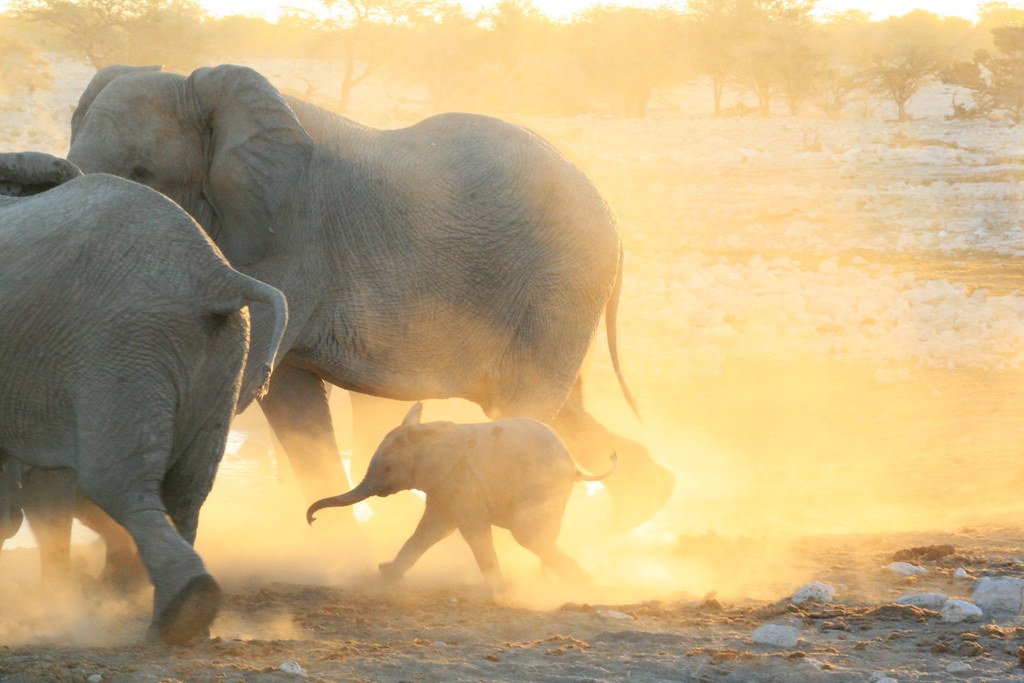 This summer, I visited the continent of Africa for the first time. I climbed sand dunes in the desert for the first time, went in a microlight for the first time, ate oryx for the first time and yes, went on safari. Several times. Today I want to share a few pictures that I took of some of the elephants we encountered.
First of all, it's worth stating for the record that elephants are huge. Like, really huge.
And they absolutely don't care about anything. Why would they? They're peaceful, have very little to worry about on the predator front and puny humans are simply of no concern. They supremely and regally ignored us. 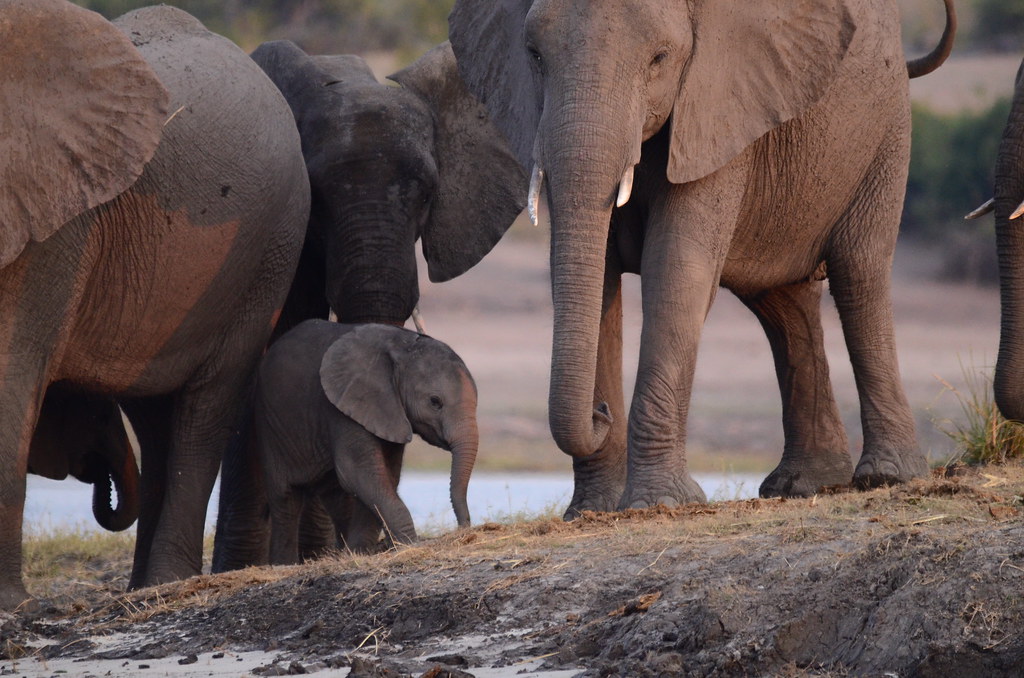 The first time I saw elephants was in the Etosha National Park in Namibia. We were camping in a fenced off area, and once we'd arrived and pitched our tents, we wandered down to the watering hole.
And my jaw dropped. Elephants. Loads of them. Drinking and showering in water and dust in the dusky twilight.
The watering hole is on the other side of a pretty sturdy-looking wall, and on our side were benches to sit and perch and watch. And so we did, mesmerised by the spectacle. The elephants bathed and splooshed and went about their business and eventually wandered off. Seeing elephants that close and in such numbers was so far beyond my expectations. I had sort of images that going on safari is long periods of nothing with the occasional dot on the horizon that may or may not be an antelope. If you're lucky.
I did not expect whole herds of elephants to be chilling in prime photography position by the campsite. 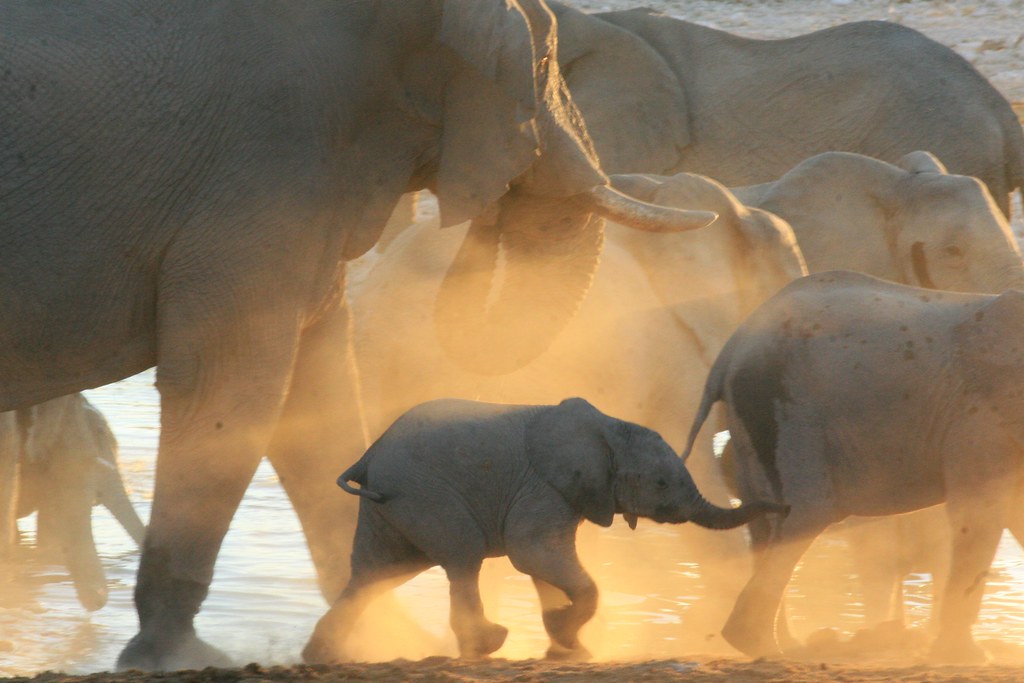 We spent literally hours that evening, quietly spellbound, sitting and watching by the watering hole. More elephants turned up for their evening ablutions periodically. And we would joke in a whisper that the seven o'clock show might be done, but the 7:30 performers would be along soon. And they always were.
Sometimes interlopers appeared. A nervous giraffe, afraid of his own shadow put in an optimistic appearance but was never brave enough to make it to the water. There were springboks galore too, and the odd rhino. But when the elephants arrived, they cleared everyone out of the way, snorting and even charging until their demands were met. And really, who's going to argue? No wonder giraffes are nervous.
And we watched, as sunset gilded the horizon, as the elephants became grey shapes shambling through the dark. And we still watched, into the night.
We spent more time at the watering hole the next day and into the evening, enjoying the antics of a little one who was enjoying a bath, and clearly desperate to fit in with his much bigger family. I think he was my favourite, and I absolutely know he smiled at me, especially for my pictures. 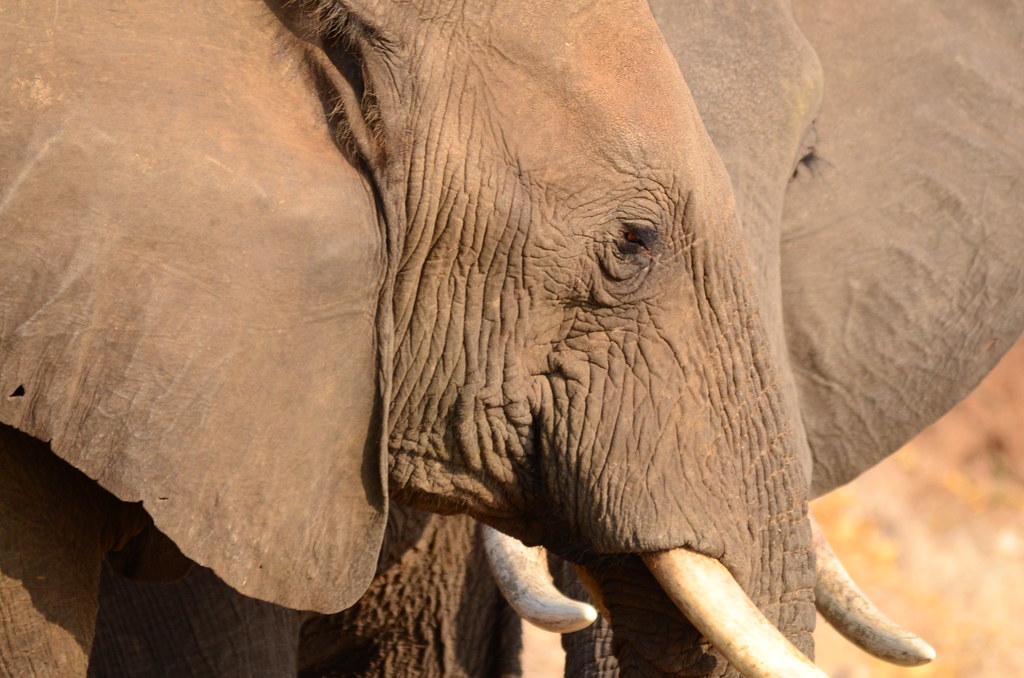 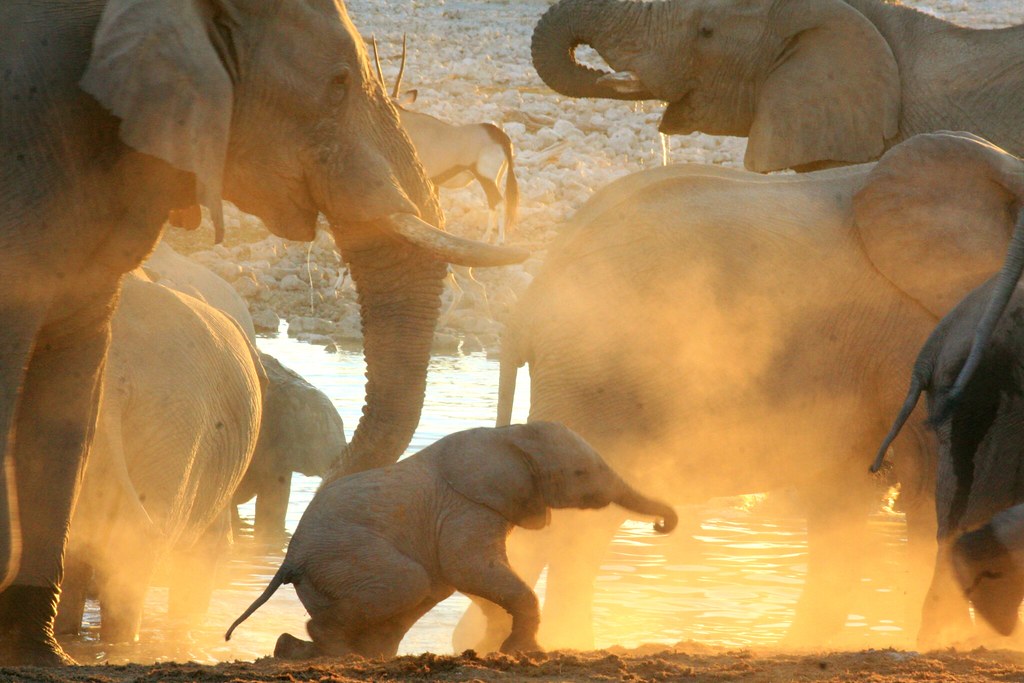 Our other big elephant experience was staying at Elephant Sands in Botswana. Not far from Nata, Elephant Sands is quite literally a place in the sands with elephants, a camp around a desert watering hole frequented by these impressive giants.
Big permanent tents are arranged in a wide arc around the water, and there's a bar and terrace which completes the ring. There's nothing else for miles around because you don't need anything else: you come to see the elephants visiting the site. And my goodness, there are elephants.
They appear from nowhere, suddenly on the horizon, making a beeline for the water. These elephants are somewhat more frenzied as this is the only water for miles around. They aren't really into sharing and operated on a much more take-what-you-can-get attitude. 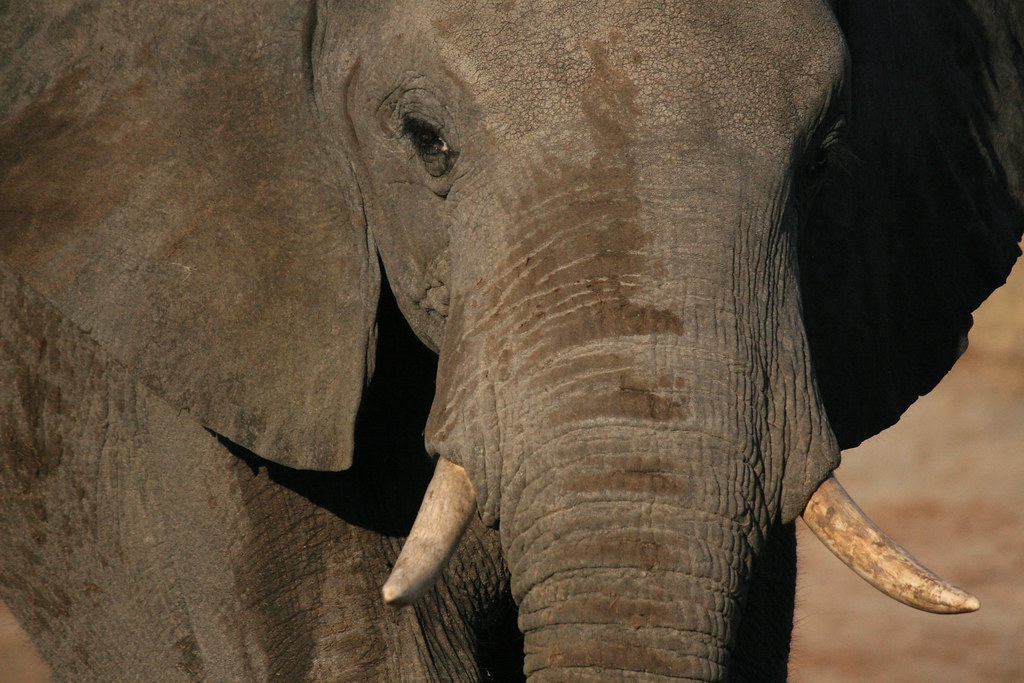 I was so excited to watch that I just chucked my bag in the tent and bounced impatiently until my roommate was ready.
Armed with my elephant safety guide, I set out. Elephant safety training goes something like this: Don't annoy one because it's bigger than you.  So don't be an idiot, don't get in the way, keep a safe distance, don't get between an elephant and something it wants, such as water, or its baby and don't make a lot of noise.
If you do annoy one, you will know because it will start flapping its ears menacingly at you.  At this point, you need to leave, calmly and briskly.  Next it will mock charge.  At this point, you need to have left already, because after that comes a real charge, and after that, frankly what's left of you could be spread on toast.
There is some etiquette at Elephant Sands. It's important to remember that a) Elephant Sands is completely open, no fences to keep out the wildlife. And b) weirdly, elephants make no noise when they walk; they're strangely light of foot. So to head to the terrace for good views, you have to dodge from tent to tent, peering around corners, checking for elephants and then walking calmly around once you're sure there are none coming. 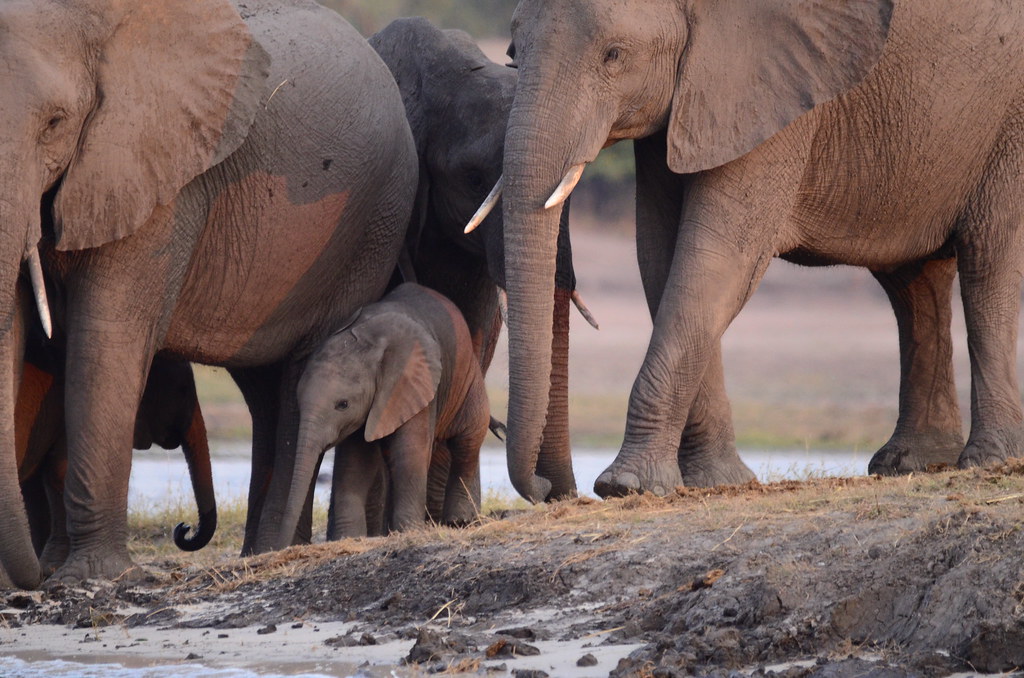 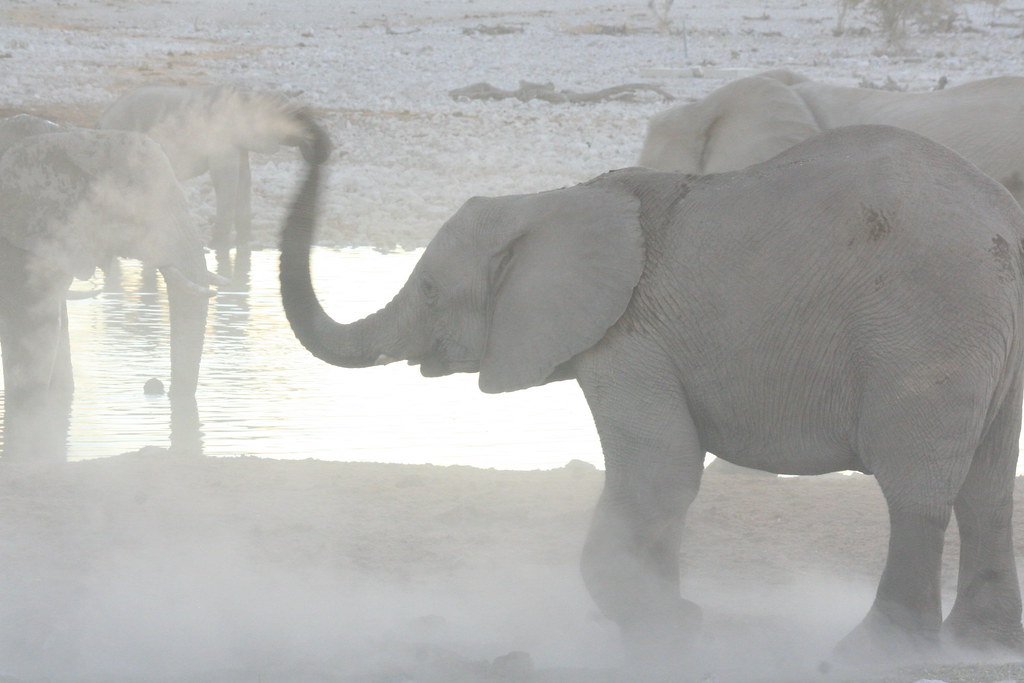 We spent the whole afternoon and evening watching the elephants, having a drink on the terrace, dinner outside and then settling down again. We were so close to the animals but again, they were so disinterested in our presence. After all, why bother with the tiny people when you can trumpet at other elephants, snort and clash tusks or run one another away? The elephants were somewhat restless and crotchety, barging into each other, huffing their displeasure, at times moving with surprising speed. As dusk fell, a fire was lit in the pit on the terrace which kept us warm in the cold African night, something we had come to expect after each hot, sun-drenched day.
We were seated in chairs lined up along the edge of the terrace, as close as we could be, scant feet away. You could feel the collective intake of breath and see the way we all involuntarily leaned back whenever an elephant barged in our direction, ears flapping a warning. My goodness, they can move, and they can really seem threatening. But even when the pachyderm prickliness came in our direction, it was never at us, always at the approach of a more interesting, and often much larger, competing elephant. 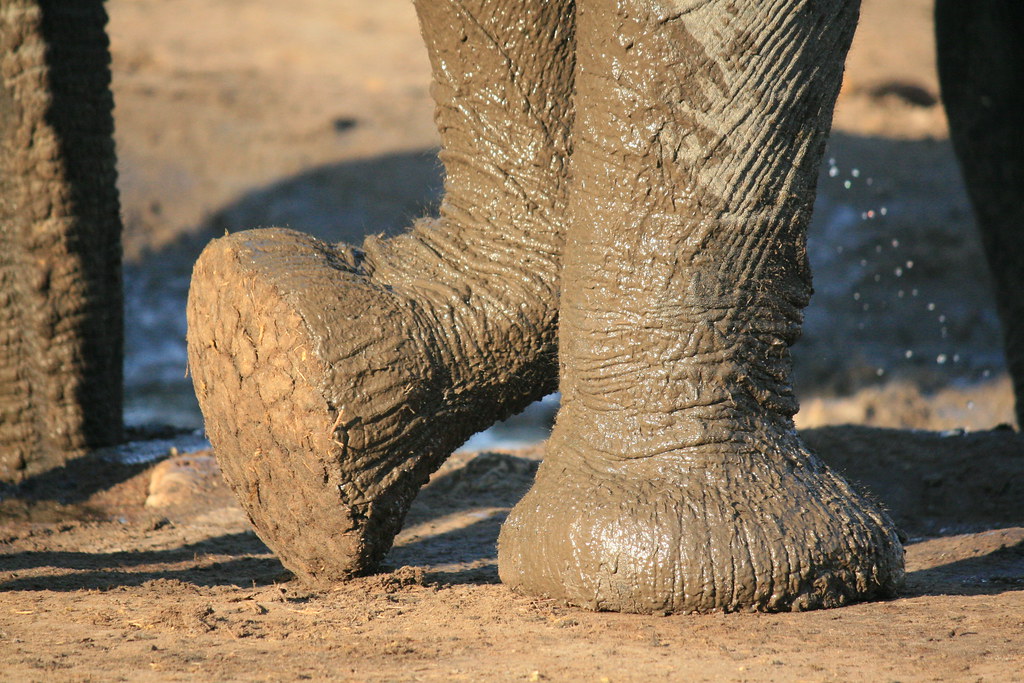 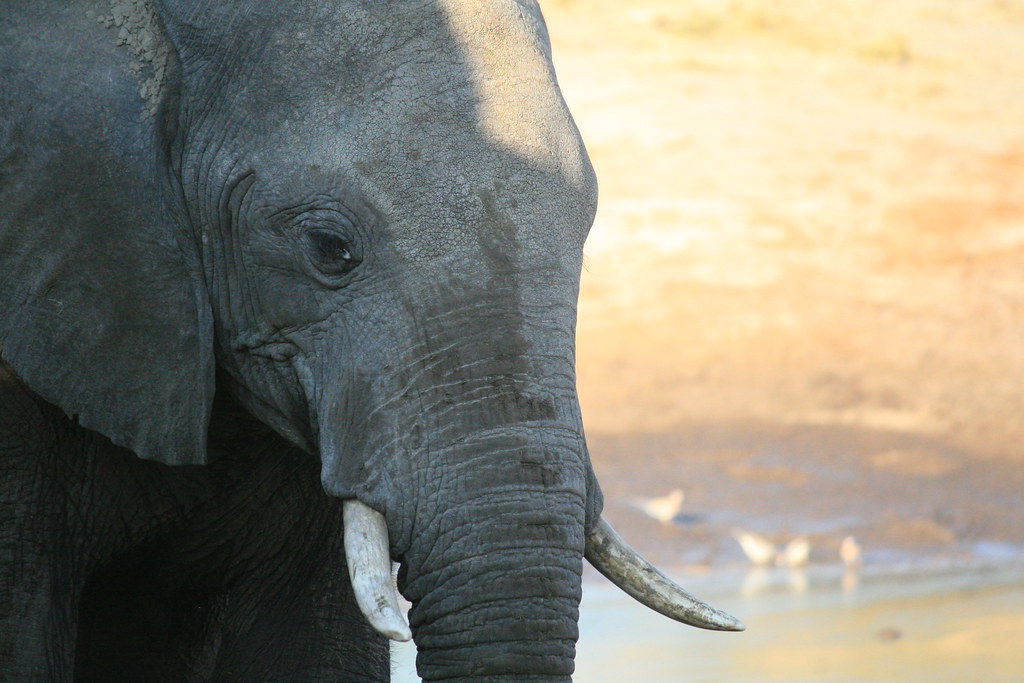 ﻿
We were sent to be not long after ten, as there had been a lion alert nearby.  Lions do use the watering hole, but not while the elephants are there.  But the issue is apparently the lions will lie down beside the tents waiting for the elephants to leave, which can be awkward for humans who accidently stumble into one.
I suppose awkward is an understatement.  Anyway, we all went to bed before the lions came, stumbling through the dark, checking for elephants and curling up in our blankets, willing the onset of the new day which might bring the dawn trumpet of more elephants.
A truly magical experience; I look forward to the day I return to Africa.
Kisses xxx
P.S. Africa (the entire continent, I'm convinced) is photographers paradise.  Have you explored any of its countries?  Are there any you would recommend?﻿
Posted by Miss Smith at 06:00