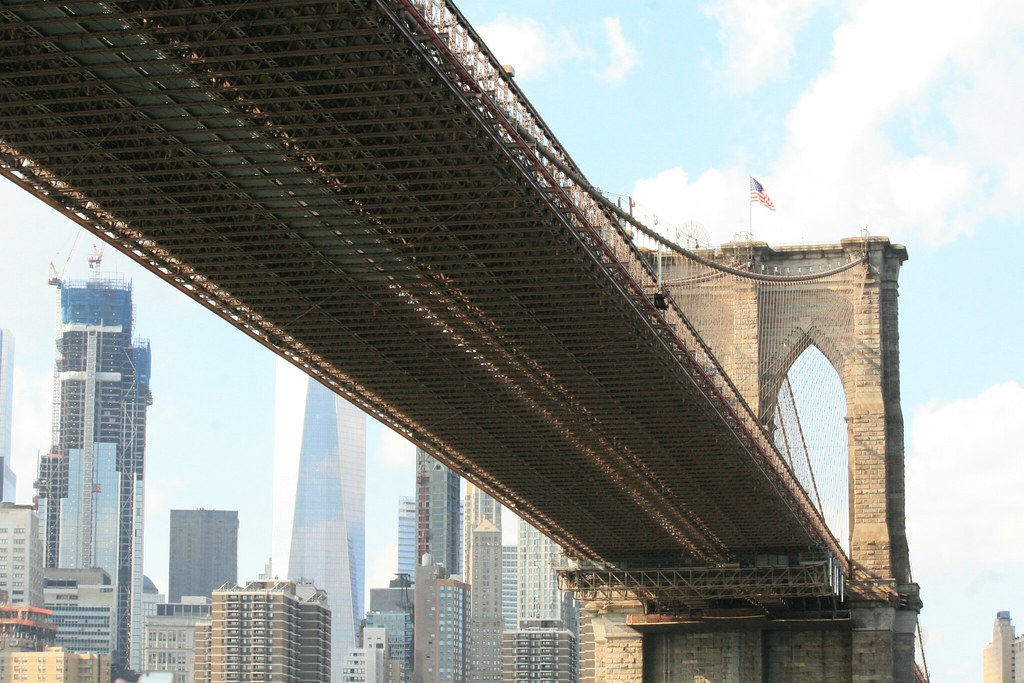 During October Half Term, the man and I headed to New York city for a week, staying in a lovely apartment in Brooklyn and enjoying every good thing the city has to offer.  Over the next couple of weeks, I'm going to post extracts from my travel journal and photos from the trip partly to share the adventure, but also to help me organise my thoughts and pictures for a forthcoming trip scrapbook.  Be warned, these posts are likely to be lengthy as I like to put tons on detail into a travel journal so that I can remember the little moments as well as the big events. I've cut them down a bit, but just can't resist a good ramble. And quite frankly, I write it for me. So here's Day 1: our first full day in the city...
We had a lie in of sorts due to the time change and got up at eight. Which is really 1:00pm for us but an early night local time (before ten!) meant that we pretty much slept until then. The man got up and managed to produce both tea and coffee using various kettles on the stove. There was no milk, so I opted for jasmine tea and it was pretty yummy! Then we showered, got ready to leave, had a quick pause to break the door handle and then headed out for breakfast. 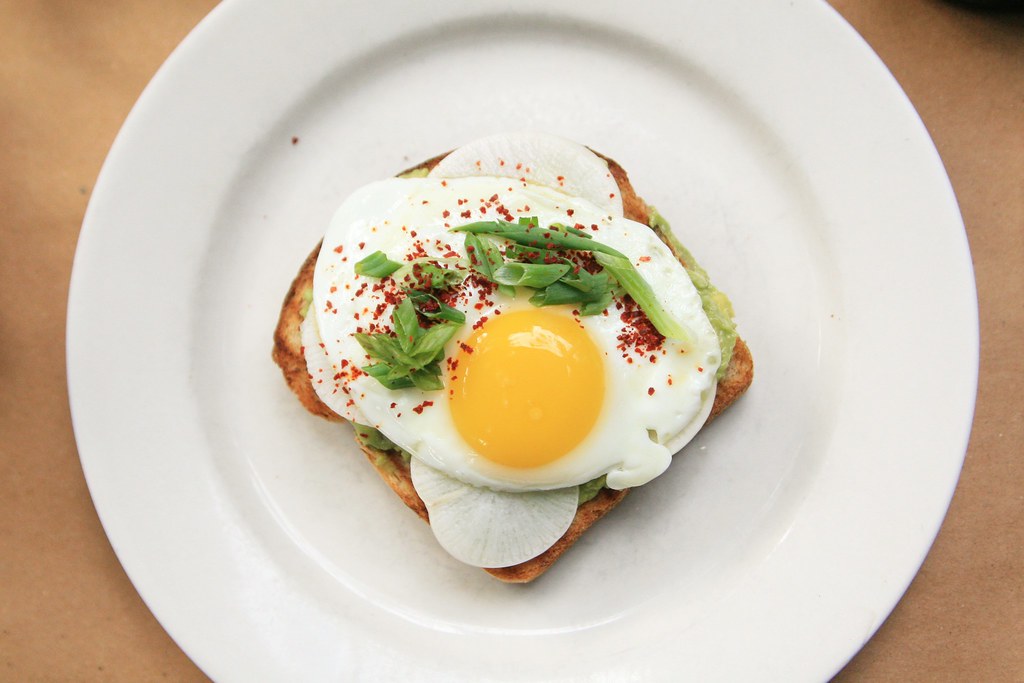 We found a little place called Saraghina for breakfast, which was recommended to us. We sat out in their garden and had our first NYC meal, which for me was avocado, lime and radishes on toast, topped with an egg (which I ordered sunny up because I can) and spring onions. And mighty delicious it was too! The man went NYC-style with smoked salmon and cream cheese and all was tasty. I had a cup of tea with milk which came warm and frothed, because Americans don't really understand these things, but it's nice that they try.

After breakfast (and a brief interlude of confusion where they swiped my card but I didn't need to enter a PIN) we hopped on the subway to Manhattan. We planned to do a boat tour around Manhattan and get a view of the sights which was a good idea as the temperature soared to 27 degrees with a lovely blue sky. We caught the C train one stop, then switched and got the A train to 42nd street, which I include not because it's interesting holiday info but because it means I can use phrases like "A train" and "42nd street". Winning.

It was the Man's first ever NYC subway ride and he rated it fine, with the high point being the air conditioning and a low point being that it was very short. One stop. Which I don't think you can blame on the train. For purposes of comparison, my high point was the light-up tube map and low point was the fact that the lines have very dull names like A and C instead of Piccadilly and Bakerloo. Sensible. And this concludes our review of the subway.

We arrived at the relevant peer north of Chelsea and booked our boat tour: one and a half hours around lower Manhattan and back again. With an hour to kill before embarkation, we mooched around and eventually stopped for a quick beverage: iced orange juice went down very well in the heat, and we were entertained by the frantic action of numerous NYPD choppers circling about. Then we hopped on the boat, found seats and sat back to enjoy the ride and commentary. Which was delivered in enjoyably gravelly New York tones by a chap who's clearly been doing this gig for years and still find his own patter and jokes amusing. Which amused me. 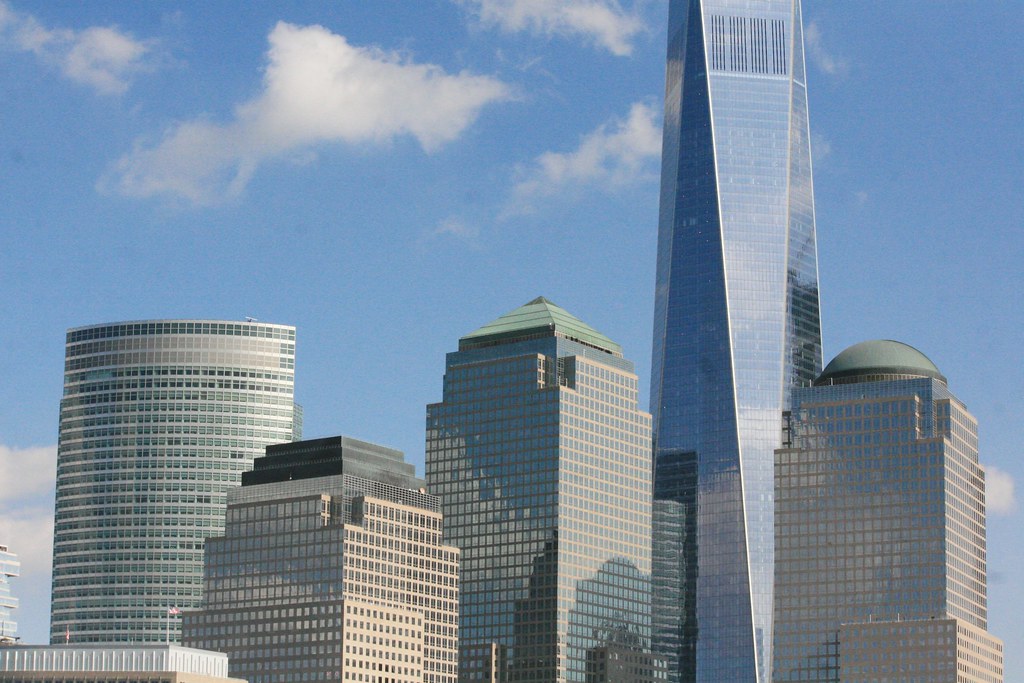 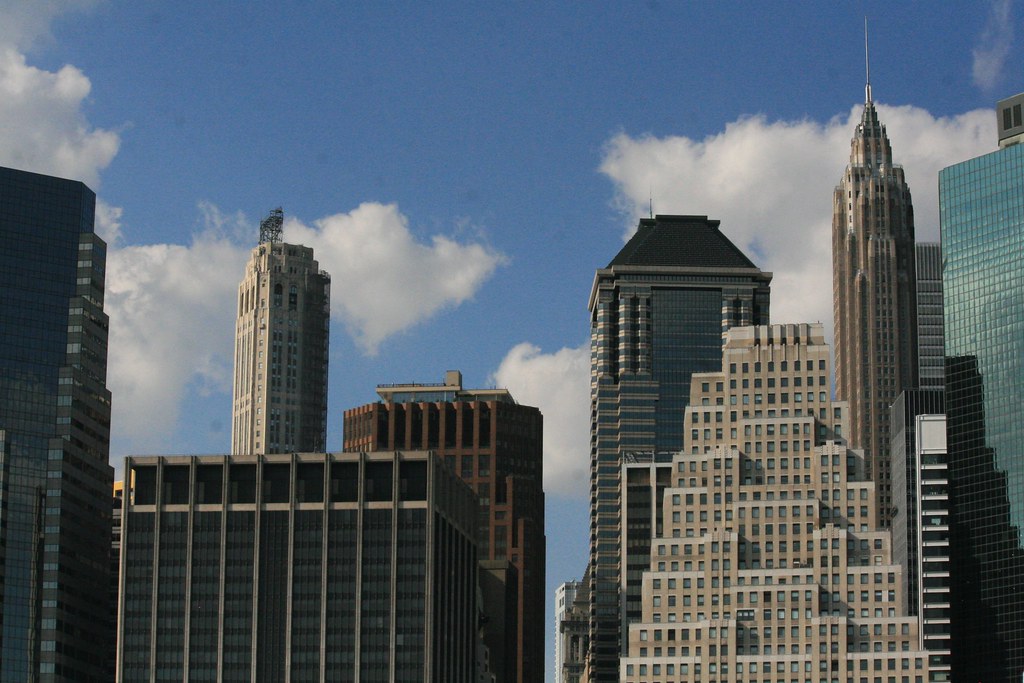 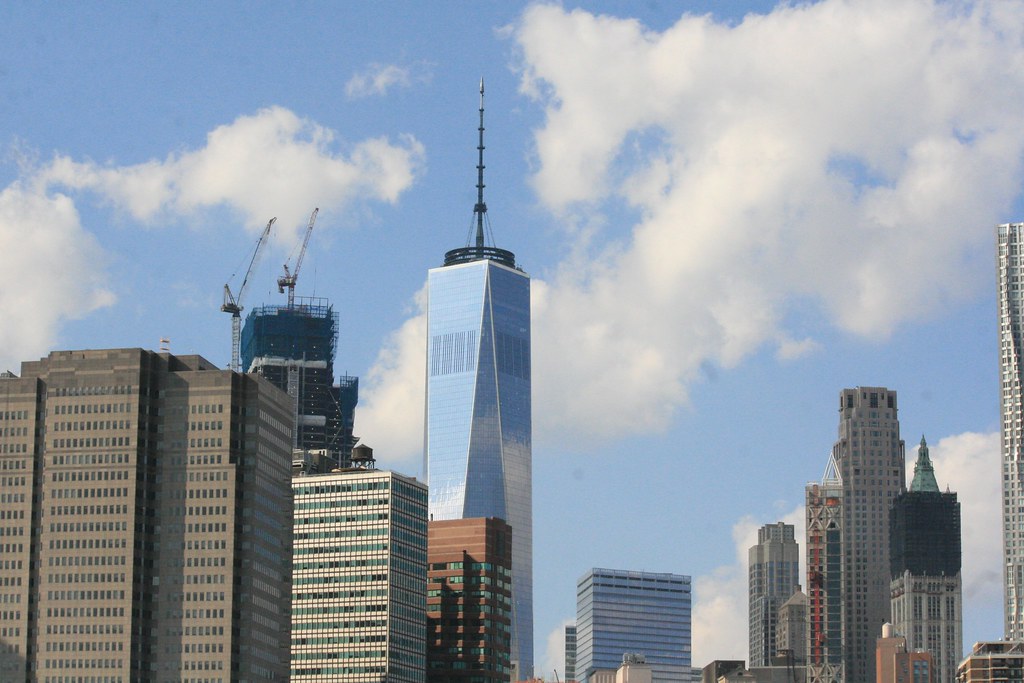 We enjoyed looking at the Manhattan skyline: a panorama of skyscrapers through the ages which crowd together at the tip of the island. It was wonderful to see the earthy tones of stone jumbled with the cut-glass flash of modern blues and greys. Shout out to the Woolworth building which I like very much, and we also saw the new Freedom tower and the Empire State Building. However, my favourite will always be the Chrysler building as it's magnificent, and even though we only saw it peeping through the odd street, it was still quite exciting to clock it, nestled among so many of New York's landmarks. 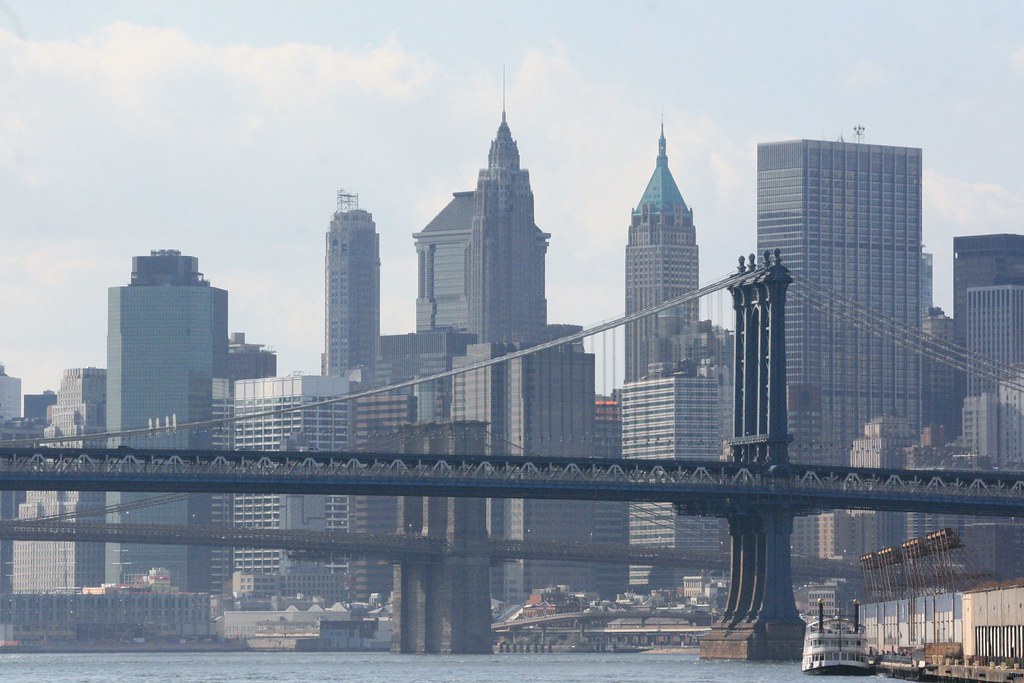 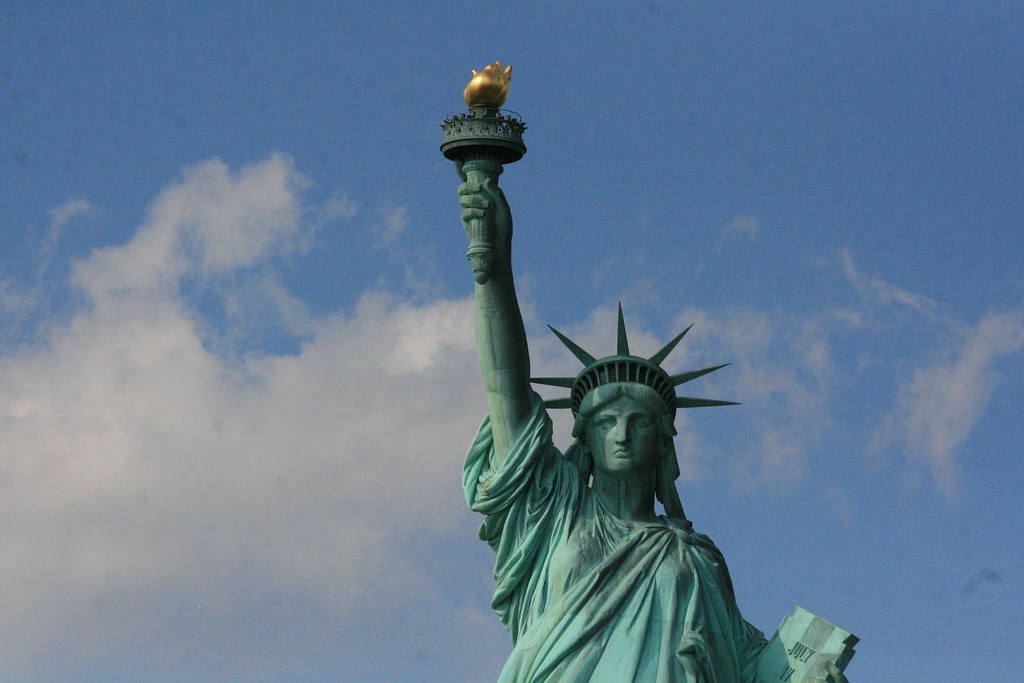 We also saw the Statue of Liberty up close, which brought back memories of seeing it on the cheap (for free!) from the Staten Island ferry 8 years ago. I'm clearly much more stylish now. And I enjoyed seeing the Brooklyn bridge: I don't think I've passed under it before. 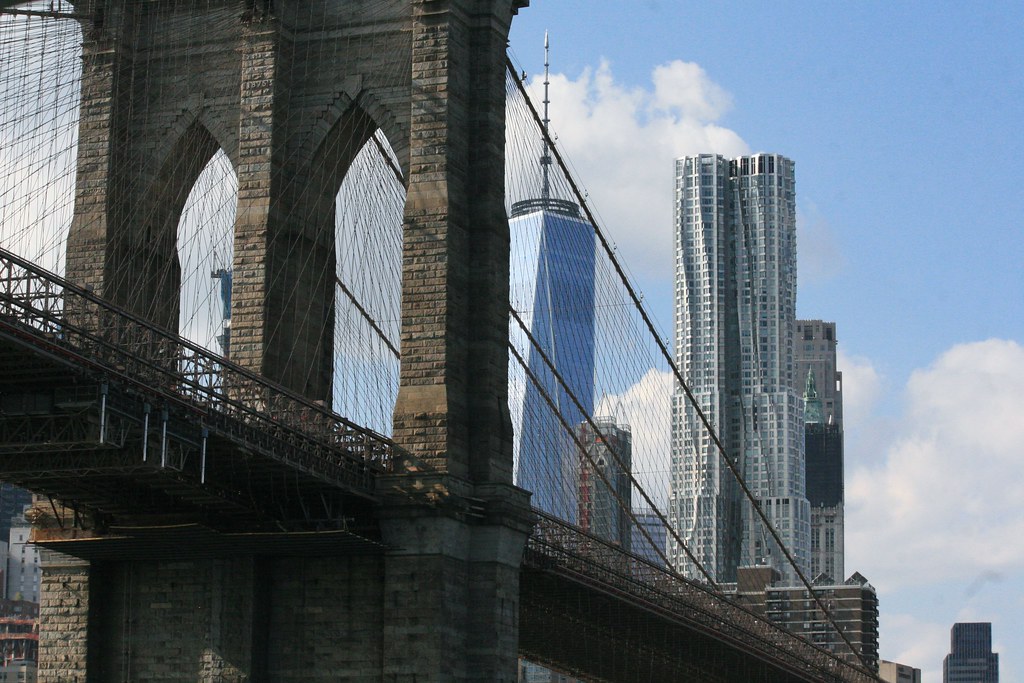 Interesting points to note: the plane that landed in the Hudson came down right by the dock where the Intrepid is moored. 185 people all survived when pilot emergency-landed the plane on the river and everyone climbed out onto the wings. Also when 9/11 happened the circle line boat tour company used their 4 boats to get 30000 people from mid-town Manhattan across to safety in New Jersey and were commended for their work that day. 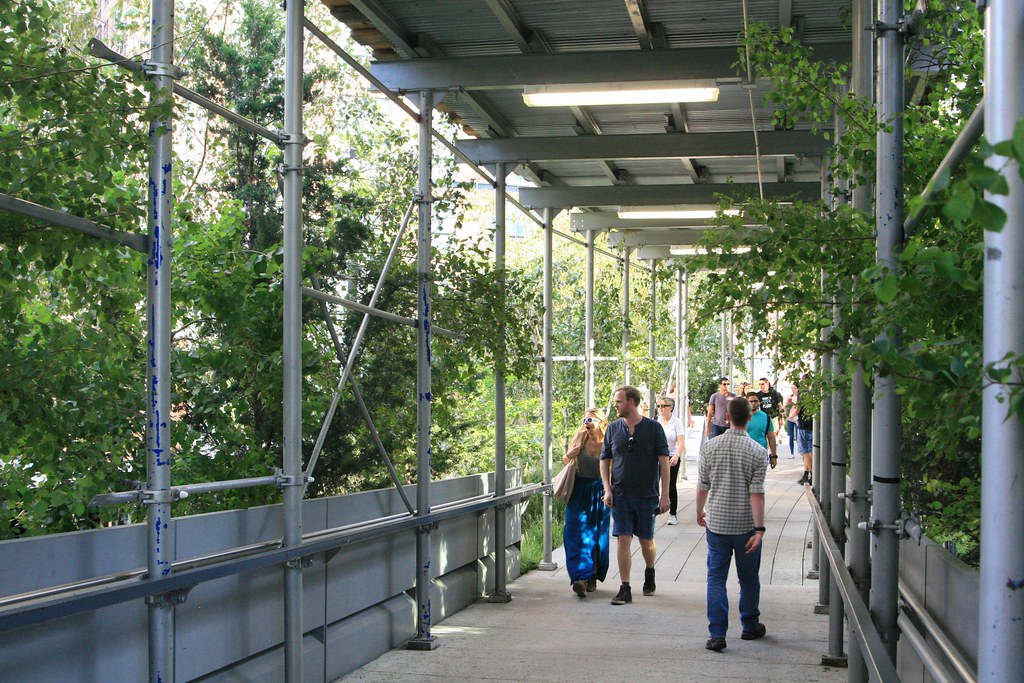 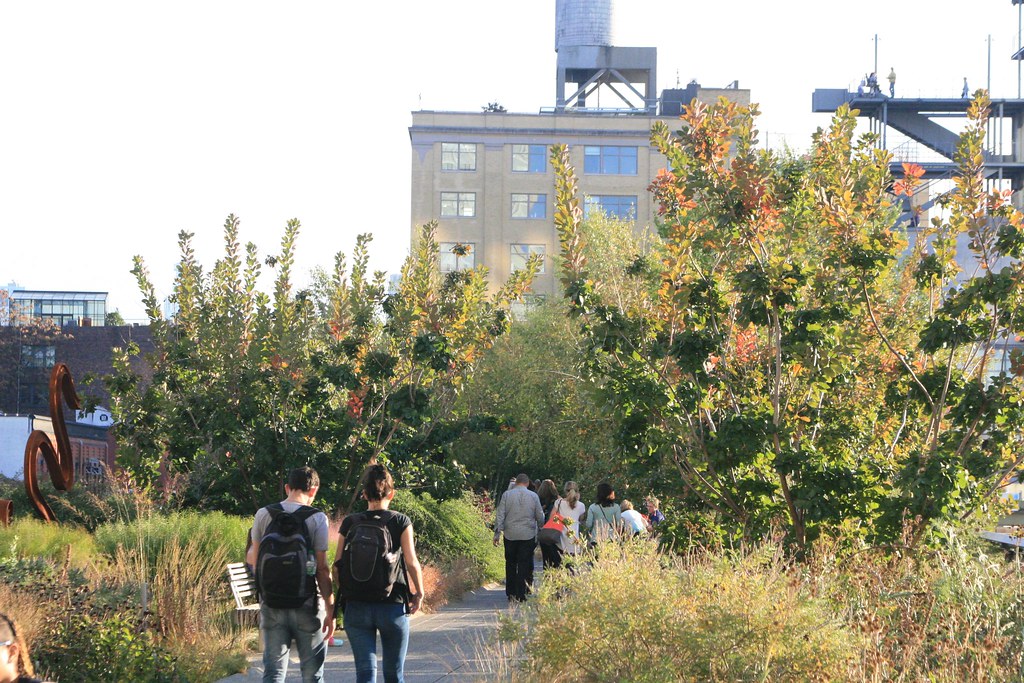 After the tour we visited the High Line: an old subway line that in no way merits the name as it isn't sub anything and goes along on bridges above the roads. Now it has been reenergised and developed into a pedestrian walkway and it was lovely to stroll along. 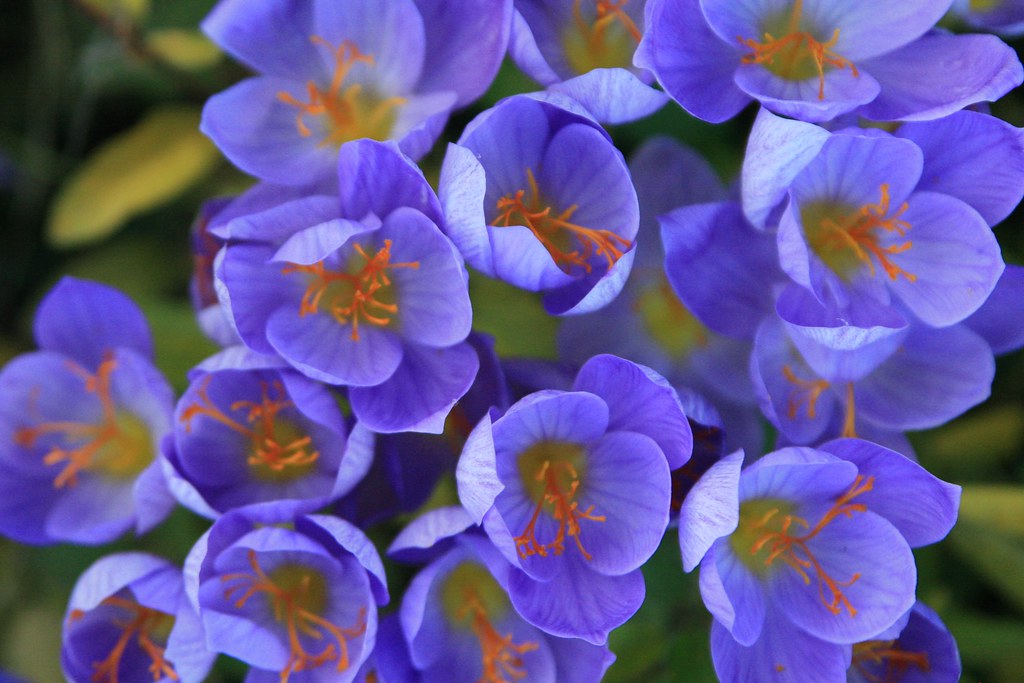 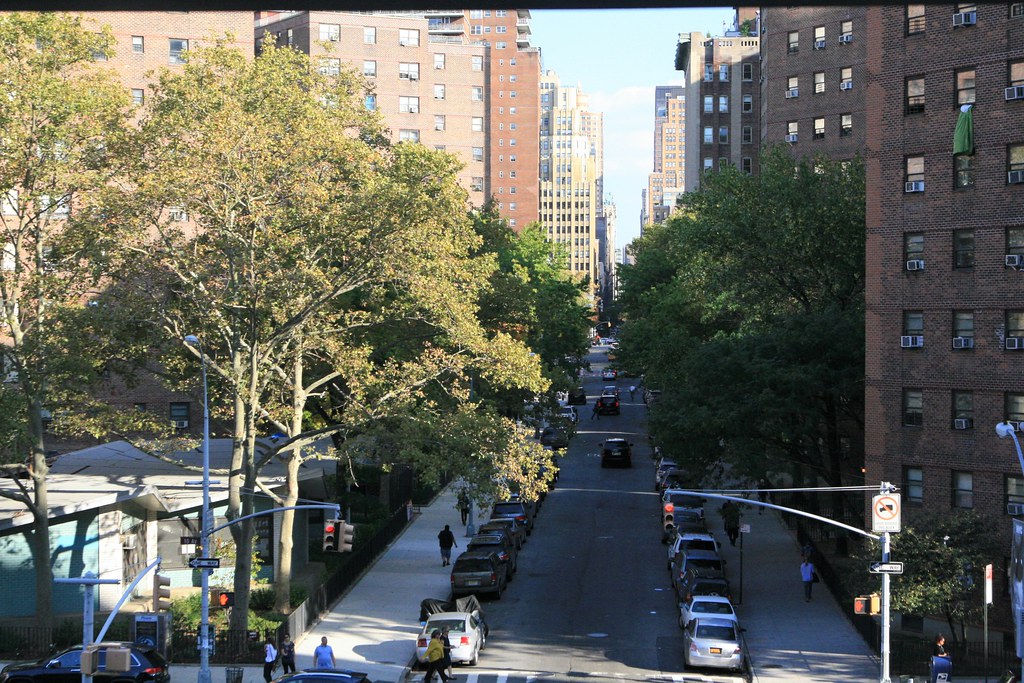 It's about a mile long and dotted with plants and benches and the odd ice cream vendor. There are regular viewing decks where you can literally sit and watch the world go by below you, with views down a bustling NYC street or avenue. 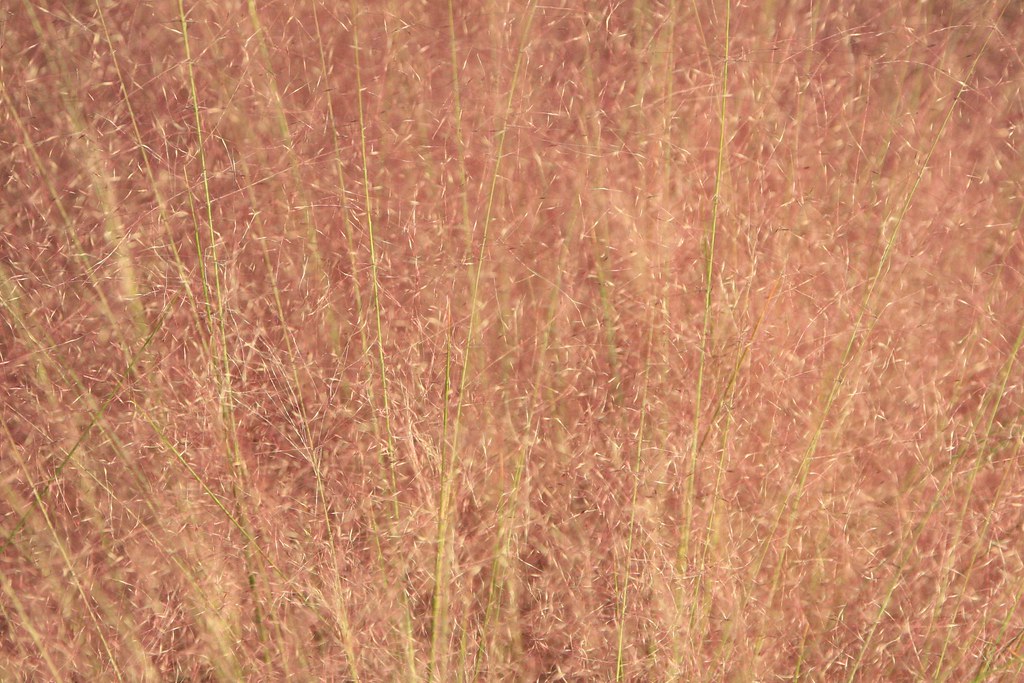 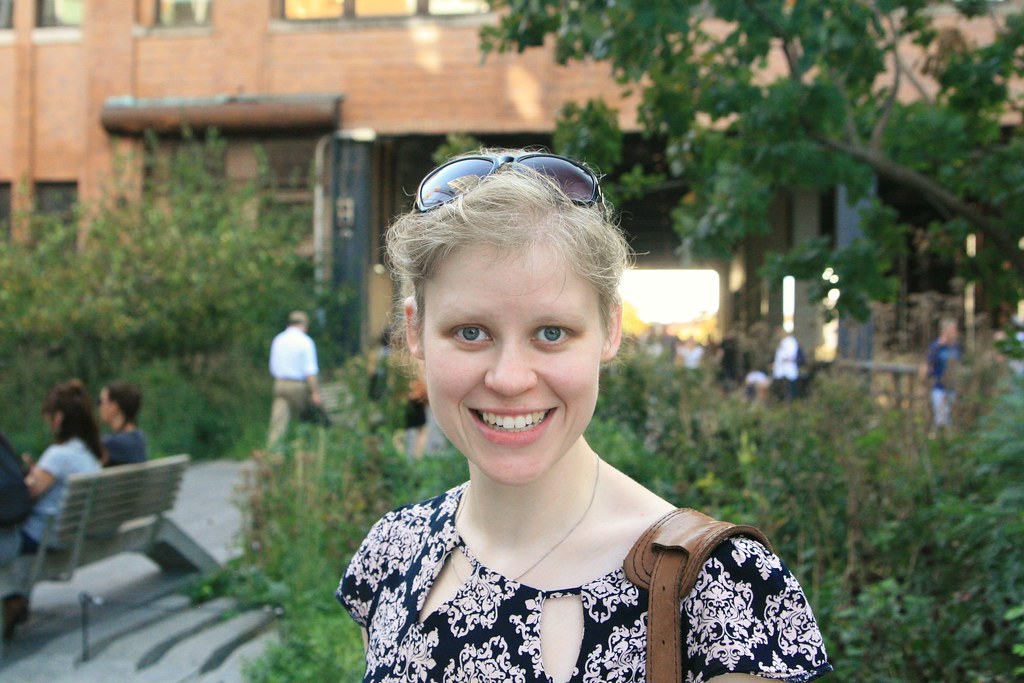 Being up on the high line was an interesting feeling. I felt very much in the city, spying down on trains in their moorings, or drawing level with construction workers, or passing right by apartment buildings. But in the leafier sections, the city retreats and you find yourself both within it and apart from it. There are works of art at various intervals, and once section of decking has water bubbling up through it for paddling. We stopped at a bench there and watched people play, from the littlest toddlers splashing about to old men cooling their feet in the current. We also had an ice cream because mint chocolate chip.

We left the high line and took a quick turn about Chelsea market which looked lovely all decked up for Halloween with loads of intriguing food vendors (Japanese influenced Mexican, anyone?) However, we didn't stop and instead headed backward to Brooklyn, to our 'hood for a cooling drink. It was nice to stroll through the neighbourhood in the early evening. Lots of the stoops of the brownstone houses are decorated for Halloween and we saw loads of kids (and big kids) crowding around basket ball hoops playing their evening game. It was a lovely sense of community, and real life that it's so easy to lose on holiday.

We grabbed some cold drinks from a local deli and sat out on our patio with the fairy lights on, sipping blood orange lemonade (me) and raspberry lemonade (him). Once half seven rolled around, we felt it was time to hunt down some dinner. It was still very warm and so nice to head out into the slightly cooler night air.

We went to a local Mexican place in our 'hood called Tepache which served us complimentary salsa and wheel-shaped crisps, so happy days. I scarfed down an enormous burrito with a generous side of guacamole while the Man sampled two of the tacos. The dishes came with a side of radishes, and I commented to the Man that you don't normally see radishes around but here in NYC I have had radishes twice in one day. And they are large! He agreed. To be fair there's not much else you can do with that conversation.

So to summarise, dinner was yummy, we were very full and we stopped off at a wine shop on our saunter home to pick some wine (the one with the best picture on the label of a girl swimming - she narrowly beat the wine with an owl on the label as her label was embossed).

We slouched on the bed with the wine and Guardian live tweets about the presidential debate. Not a bad way to end an evening!

P.S. If you read all of that, I can only offer you my commendations, and warn you that this is only the first instalment. It gets longer.

P.P.S. In fact, think of it as more of a travel dissertation than a travel journal.
Posted by Miss Smith at 14:30