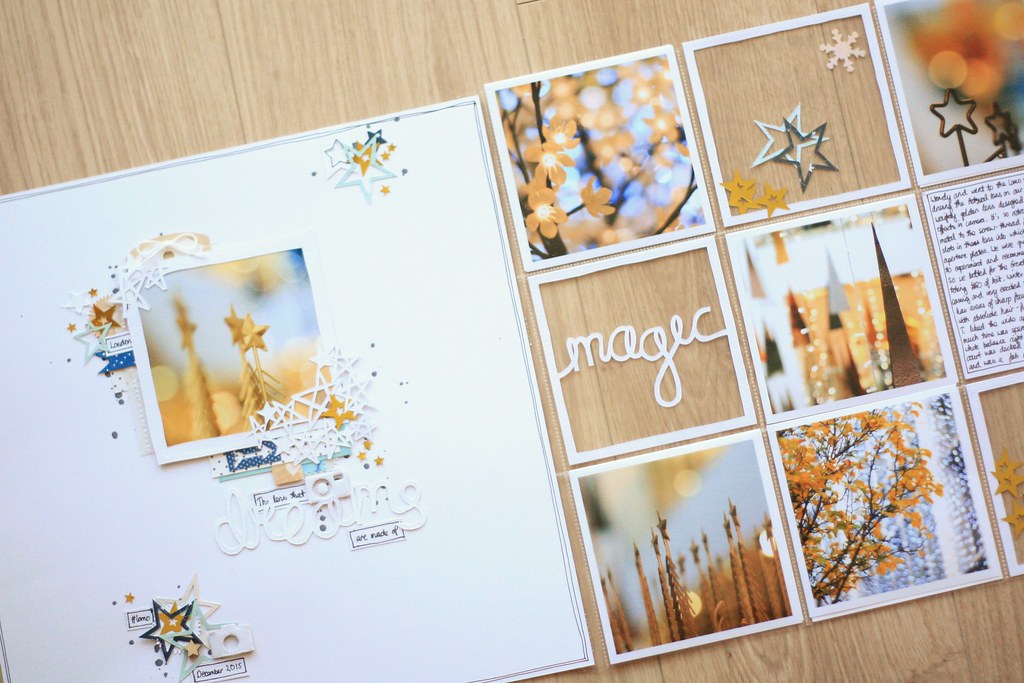 Today I'm sharing a pocket page layout I made to accompany the scrapbook page I blogged about yesterday (you can find it here).  Earlier this month, I posted a layout I made (linked here) and followed it up by making a matching divided page protector (linked here) and I repeated this process with this layout because I loved the result. Making a pocket page allows me to include additional photos without trying to cram them onto a 12x12 page.  I typically scrapbook with lots of white space, and therefore don't often use more than one photograph as it feels too crowded for me.
Pocket pages give me the opportunity to make up for that, while still maintaining my own style of scrapbooking.  Perfect!  It's also a good for me to include extra journaling, as I always want to write a lot and include details.  With a pocket page, I can slot in as much writing as I like and it's no problem. 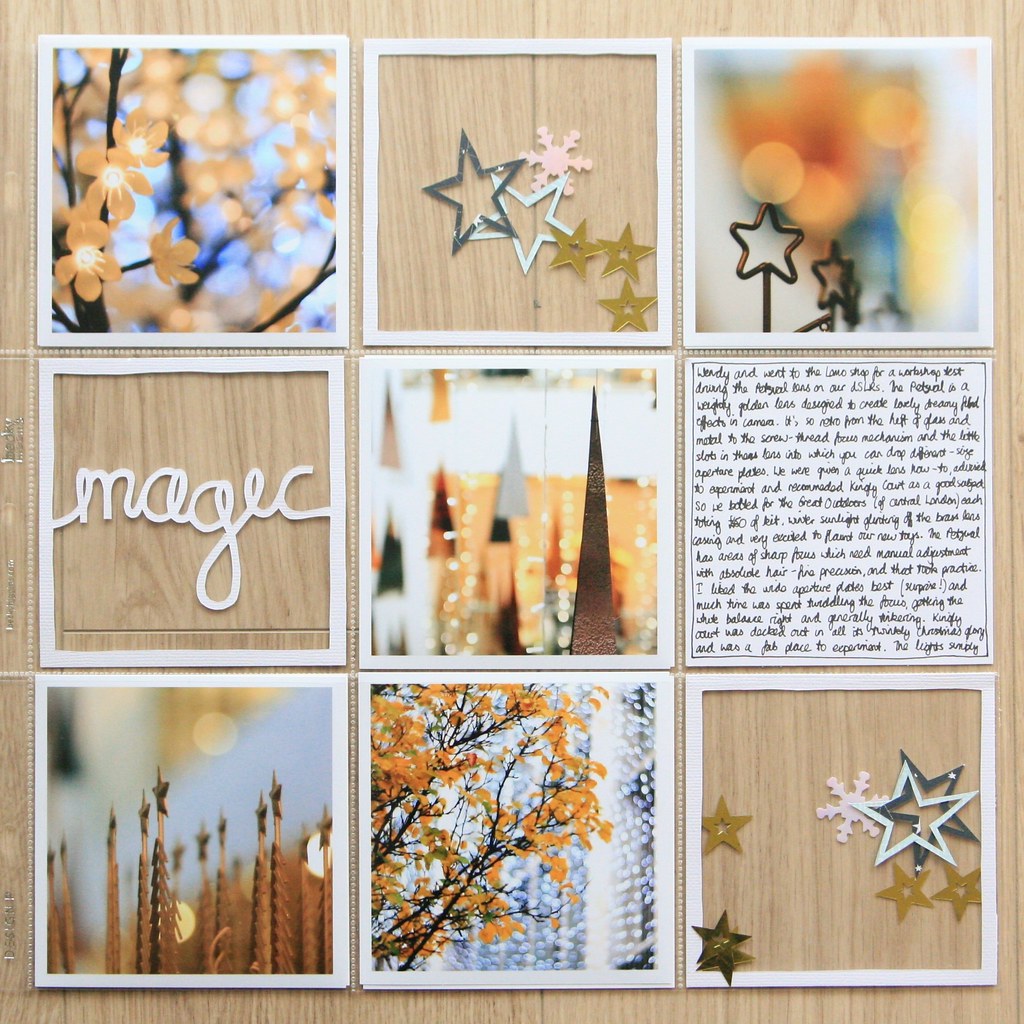 This scrapbook layout in particular was a great choice for a matching pocket page; the layout is about a photography course I took and so I had a little stack of pictures to include.  I had these printed, along with loads of other Christmas pictures from 2014 and 2015, by photo company Cheerz.  I've used them a few times to order their Big Fat Box of square prints.  I like the image quality (better than others I have used), I think the price is fair, and I love that I can have square-shaped prints with white borders.
I have been really sold on 4x4 pictures lately, as they are big enough to still see detail in the images, but not so big they swamp the layout. And I think my fascination with the squares is the fault of  Instagram; I love how photos looks formatted together like this! 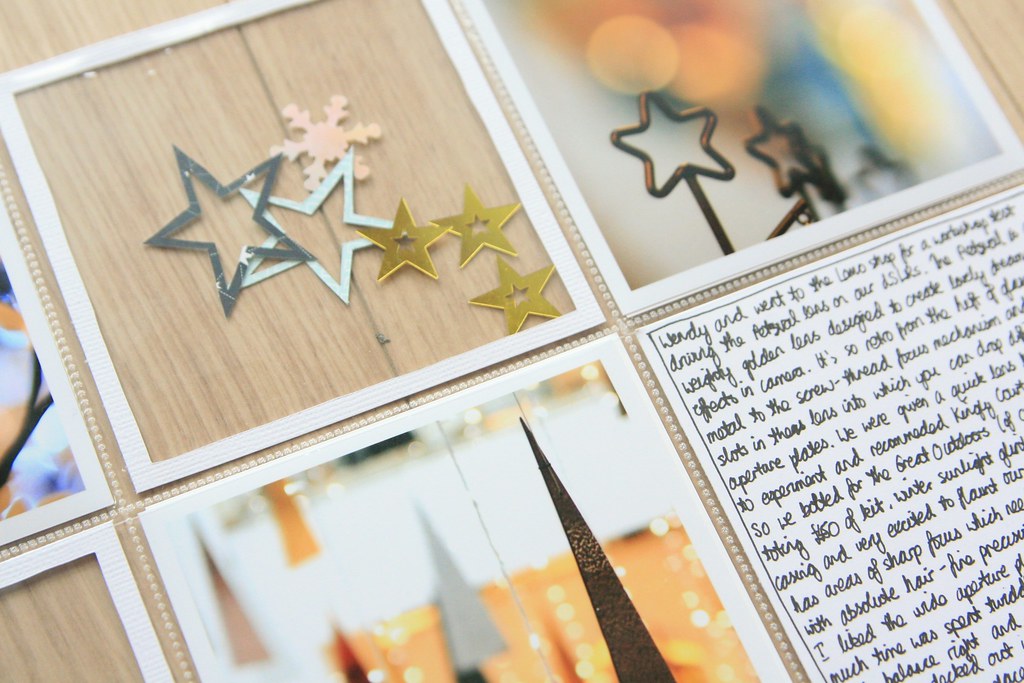 Once I had positioned my photos where I wanted them, I allocated a pocket for journaling, and made white, cardstock frames for the remaining pockets.  This creates a cohesive visual as each pocket then has the same border, the embellishment mimicking the photos.

For one of my borders, I didn't cut out the middle entirely, but traced out the word 'Magic', before cutting out the negative space with my craft knife. The lacy, intricate look of a hand-cut, handwritten word is a good link to the scrapbook page that this pocket page is designed to match.

To go in the empty pockets, I used my craft knife to cut more stars out of patterned paper, matching the ones what I used on the 12x12 layout.  Another visual link between the two, and it really feels to me like the two pages belong together.  I like to include empty, open space in the pockets so that when these pages are in my Journal Your Christmas album, the next page can peep through from underneath.  It also keeps the design lighter and clutter free, with a few delicate star shapes free to shift around and move. 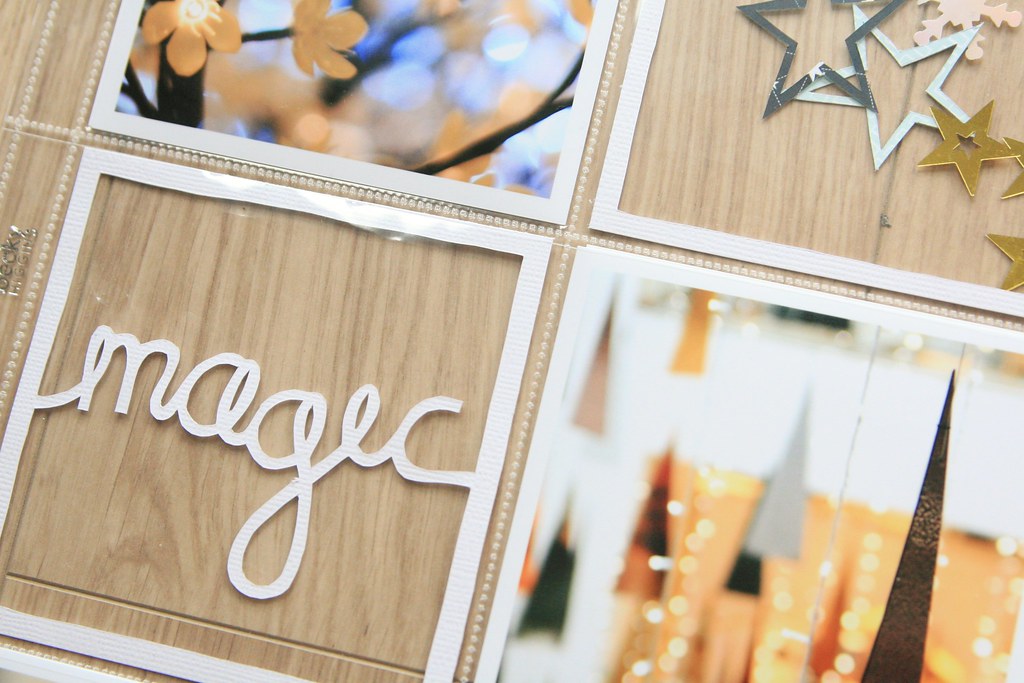 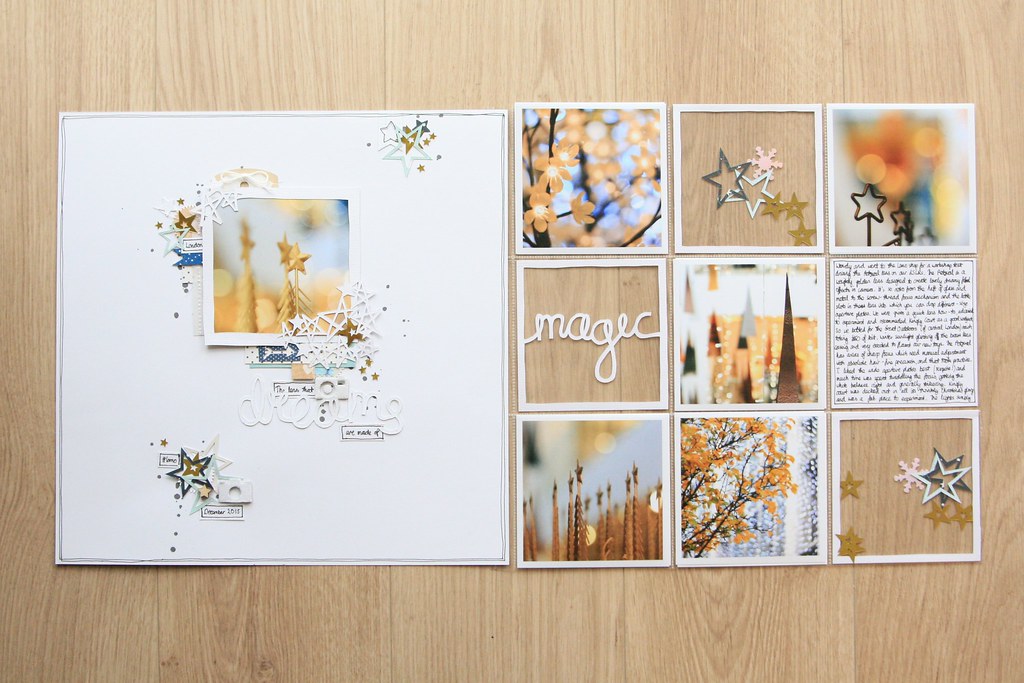 When selecting photos to slot into my pocket page, I took care to pick out the ones that had a similar colour palette, and shared the same tones as the layout.  Once again, this emphasises the link between the two pages but also means they don't jar when placed next to each other in the album.  On the contrary, I want them to complement each other.
The pocket page layout is actually double sided, and so I used the rest of the photos positioned behind the existing ones. 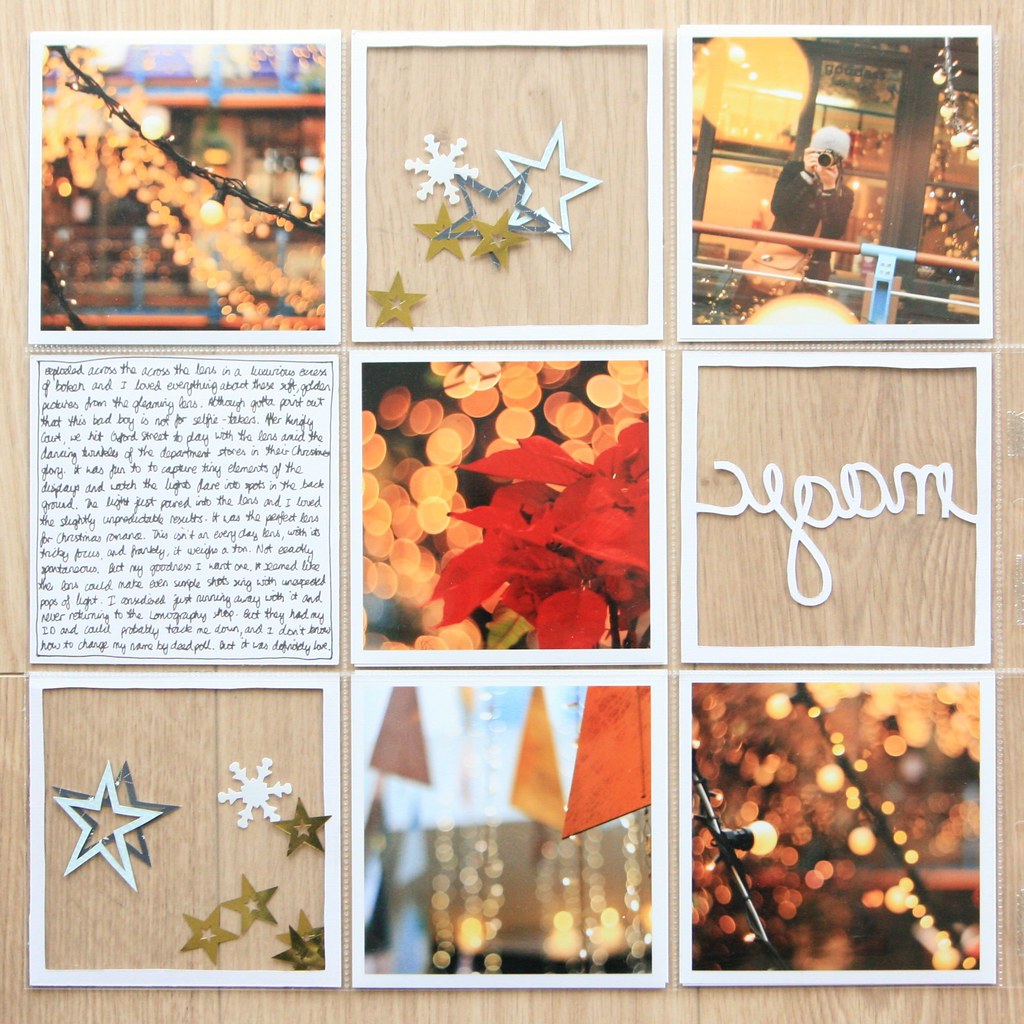 With the front already designed and complete, it was easy to assemble the back of the layout.  The embellishment pockets are already double sided (I used double-sided patterned paper for the stars with blue tones on both front and back, so I knew they would fit the design). I appreciate that the word 'Magic' is backwards, but this doesn't actually bother me at all.
All  really needed to do was check that I was happy with the positioning of the pictures! 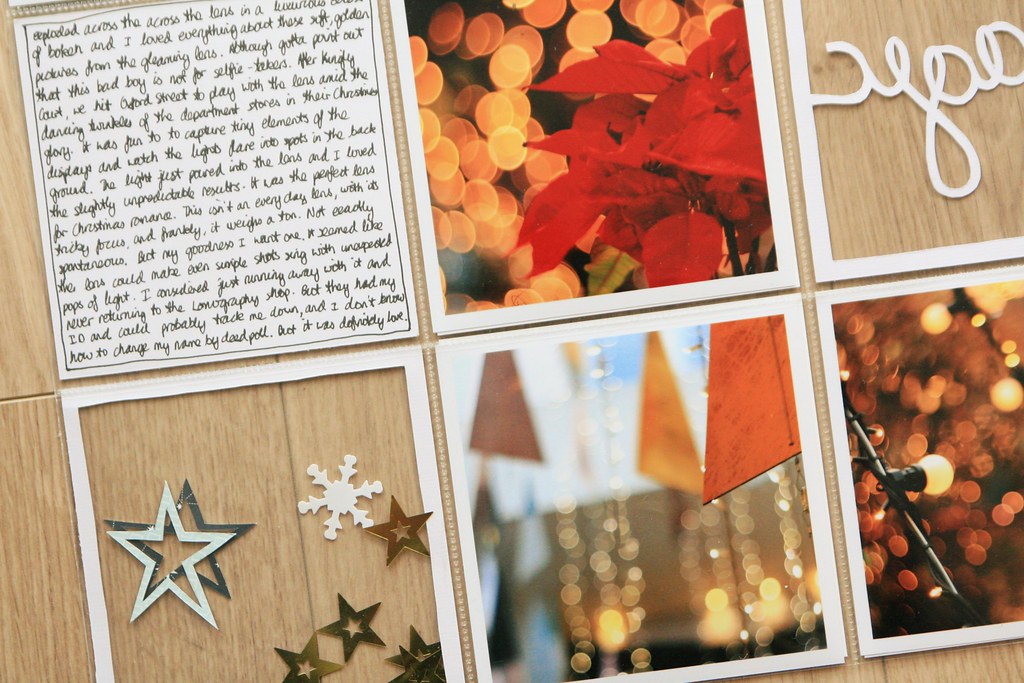 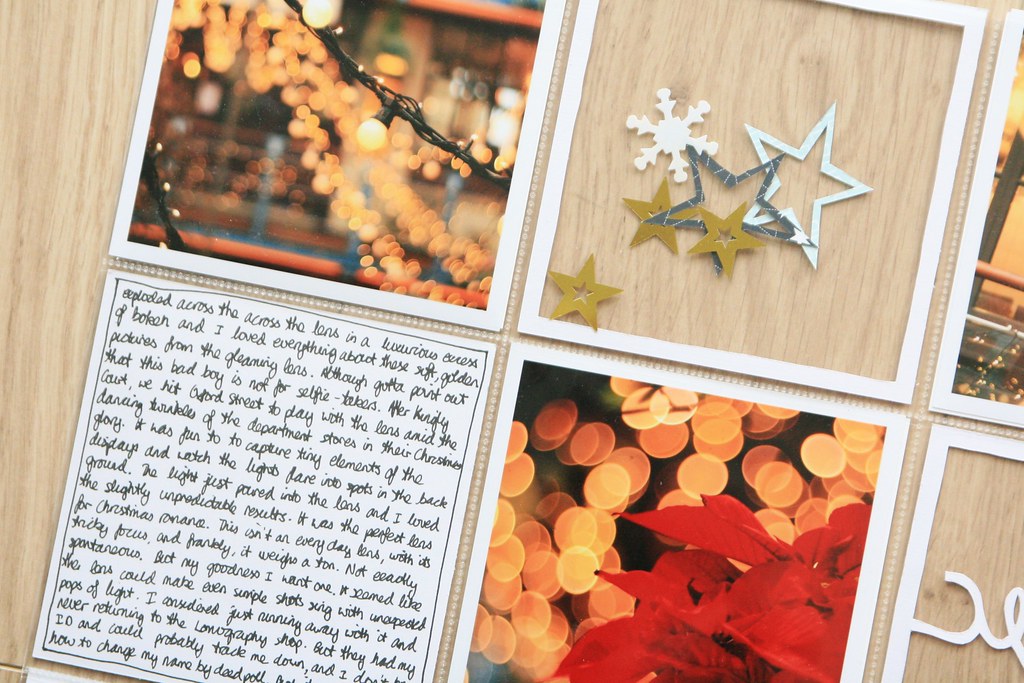 To add journaling to the layout, I cut a 4x4 square of white card stock, and wrote out the story of capturing these images during the workshop with the Lomography Petzval lens. I started this story on the 12x12 layout, but it was nice to have plenty of space to include everything I wanted to say. I wrote on both sides and slotted the card straight into the page protector.  If I had wanted to write more however, I could have used multiple cards and still popped them altogether in one spot.