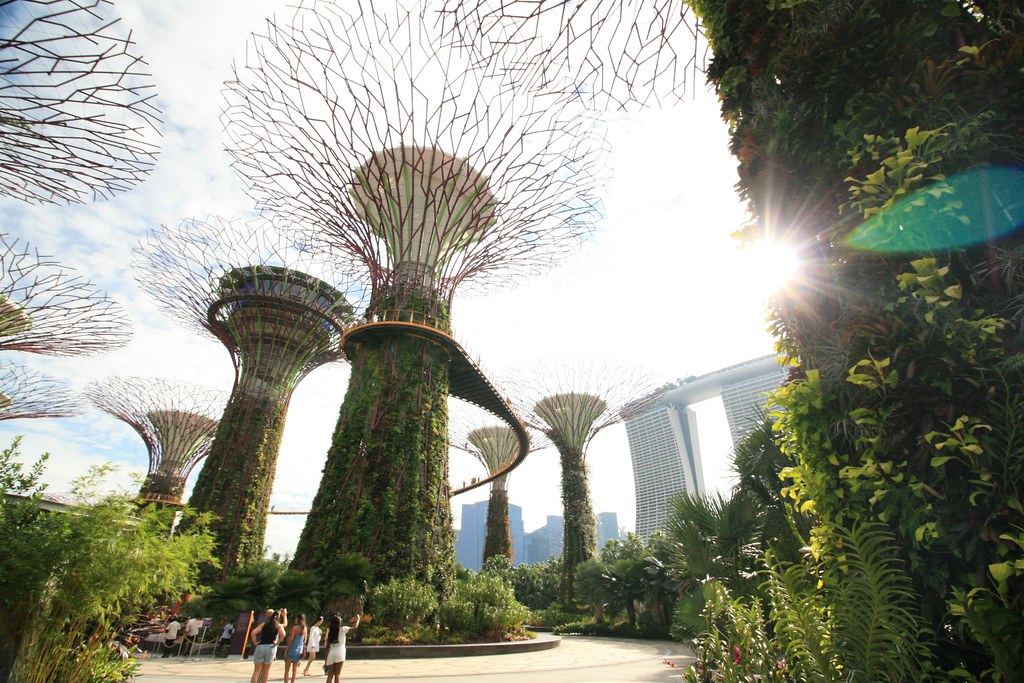 On a layover from London to New Zealand, my brother and I found that we had 15 hours to spend in Singapore.  You can read about how we spent the morning here, but this week's travel post is all about our afternoon at the Gardens by the Bay, my absolute favourite area of  Singapore.

We rode the MRT to the gardens and emerged from the cool air con into a sweltering, sunny day. The gardens are huge, green and sprawling and unfold for acres and acres in different zones.  We strolled in and out of the shade, drinking as much water as we could and enjoying each different aspect of the park as it enveloped us.  Soon the city seemed a long way behind, and our destination, the Cloud Forest, was ahead of us. 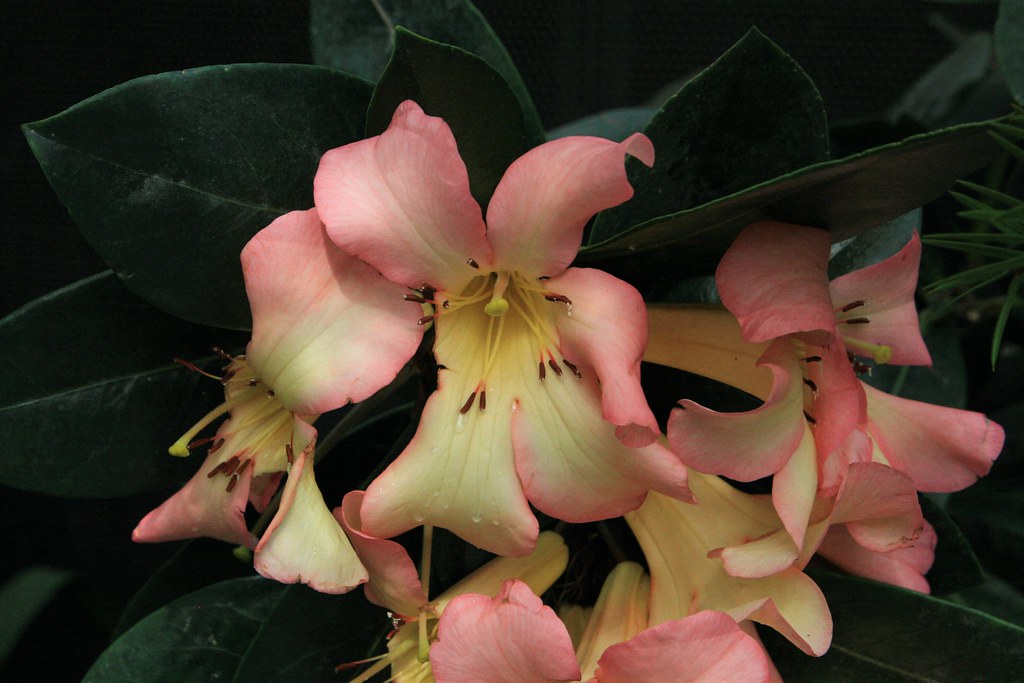 The Cloud Forest is a giant - and I mean giant - biodome, kept at a controlled climate designed to imitate the cloud forest environment found in countries such as Ecuador.  Cloud forests are known for their incredible species diversity, so aiming to mimic this atmosphere is an understandable ambition. Tickets are a little pricey, but I was really keen to visit, and frankly, it did not disappoint. 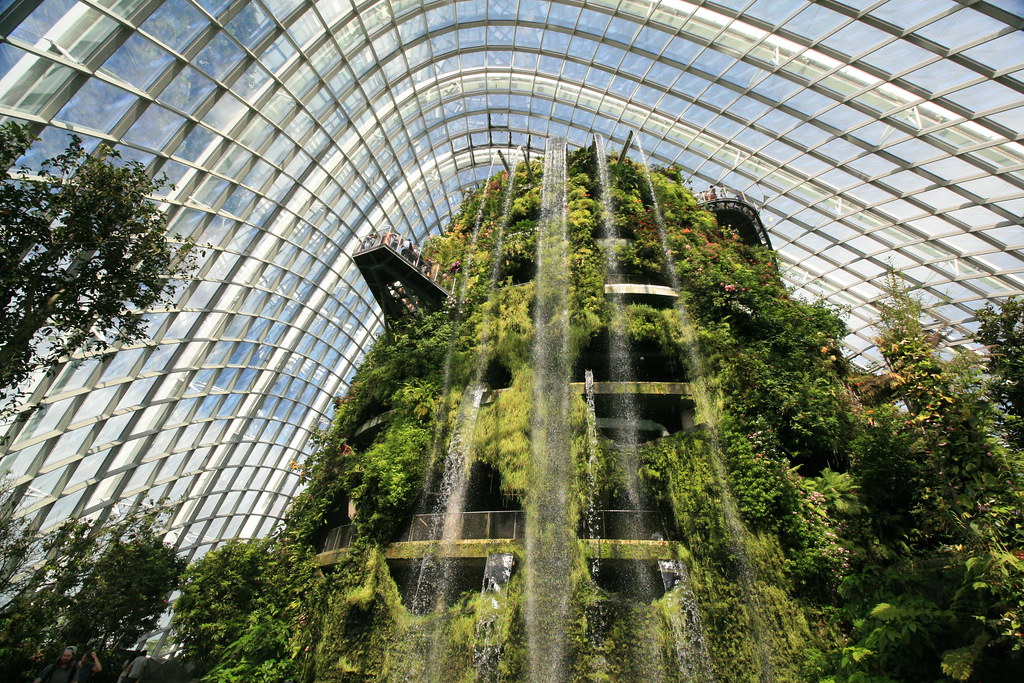 The Cloud Forest dome was nothing short of phenomenal. It almost defies description. As you enter, you're met with cool spray from a giant waterfall, a lovely contrast from the unremitting heat of the day, and the air was temperate, pleasant, fragrant. It was like stepping into a massive human terrarium. 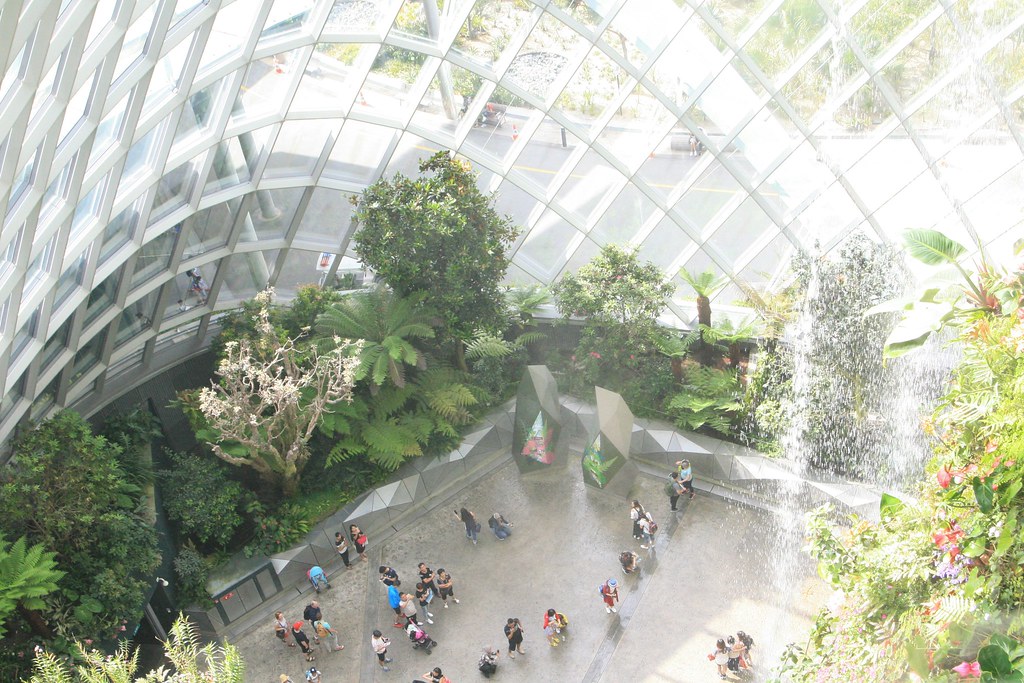 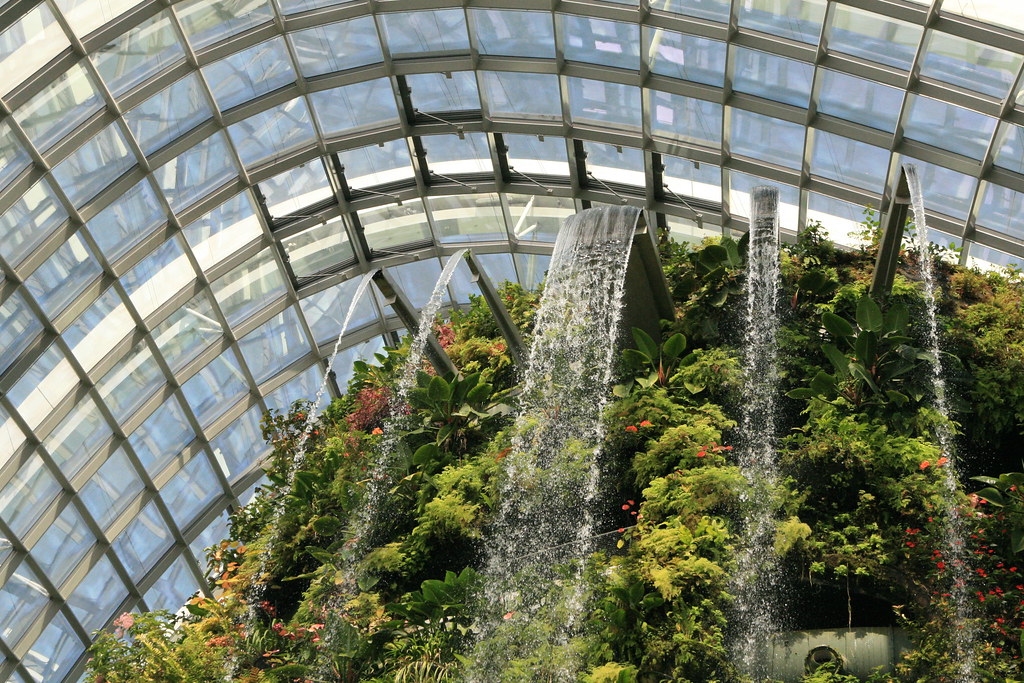 To explore, one scales the inside of the dome in a lift before emerging at the very top of the cascade, ready to descend gradually by means of a walkway which juts away from the falls and the mountain, seemingly fragile and suspended in the air. Heading down the ramp reveals different zones featuring different plant life, or geological displays, or conservation information. 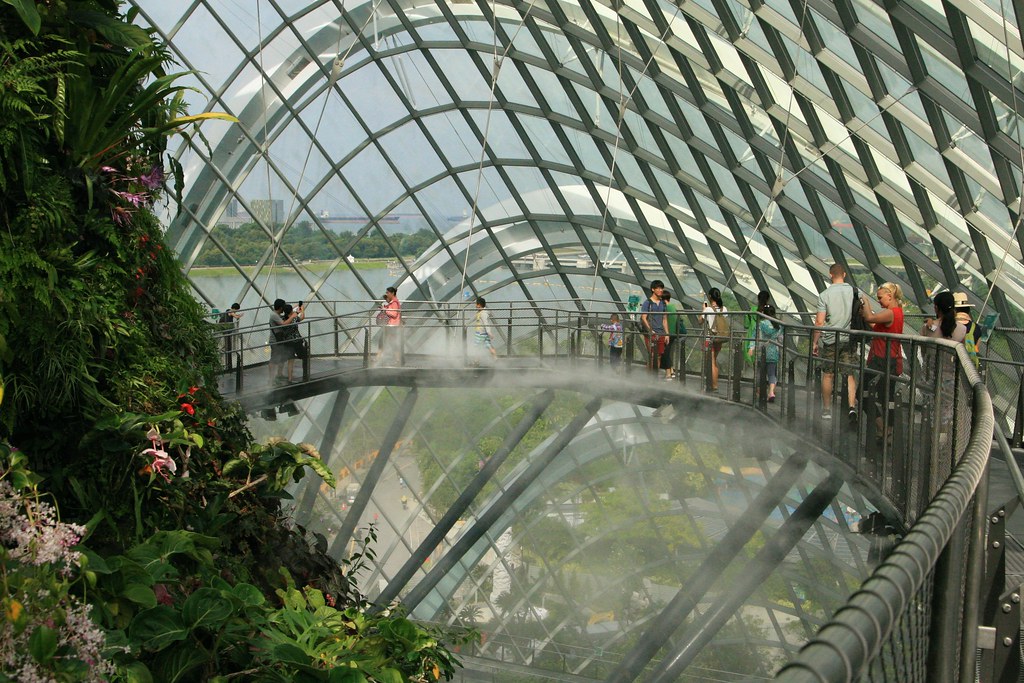 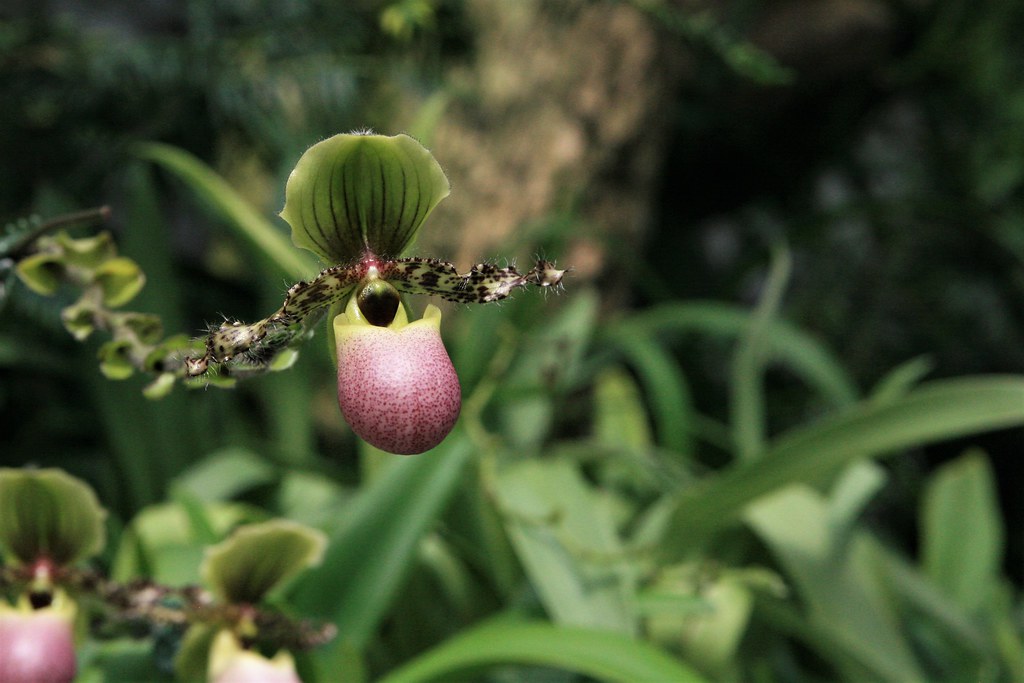 To me however, the real star of the show was the concept itself, rather than the exhibits. The Cloud Forest is the perfect blend of horticulture and architecture. I loved the juxtaposition of the glass frame and the trailing flora; the sharp, pure crystal panes against the lush vibrancy of life. Beautiful, evocative, other-worldly. 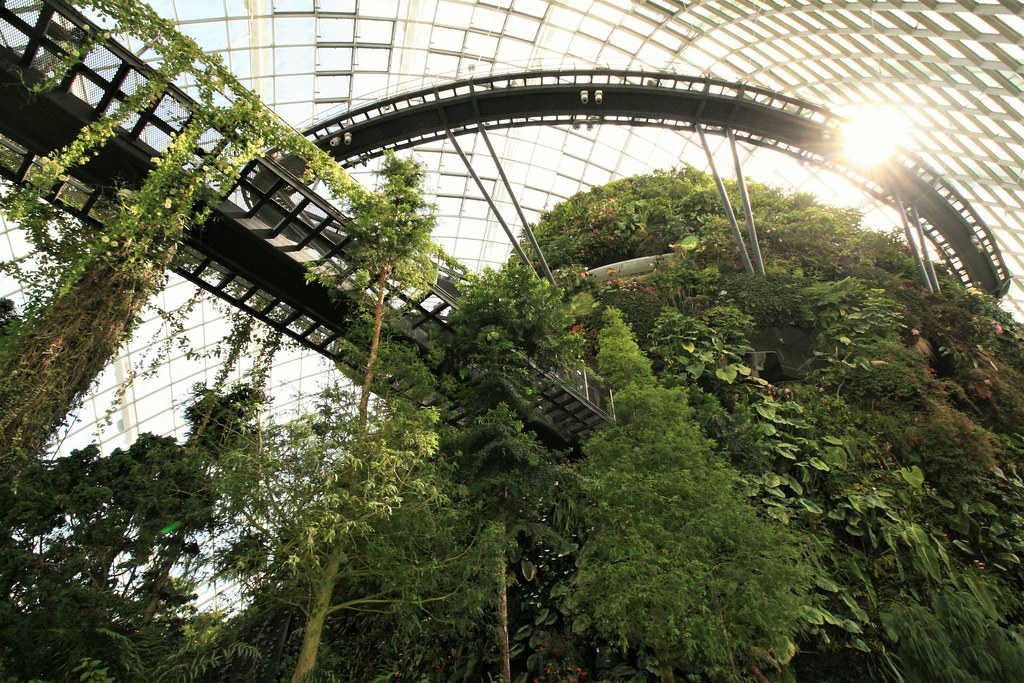 Eventually, we reached the ground again, and we left the Cloud Forest behind.
We had one last stop before we had to return to the airport. We had to visit the Supertrees. 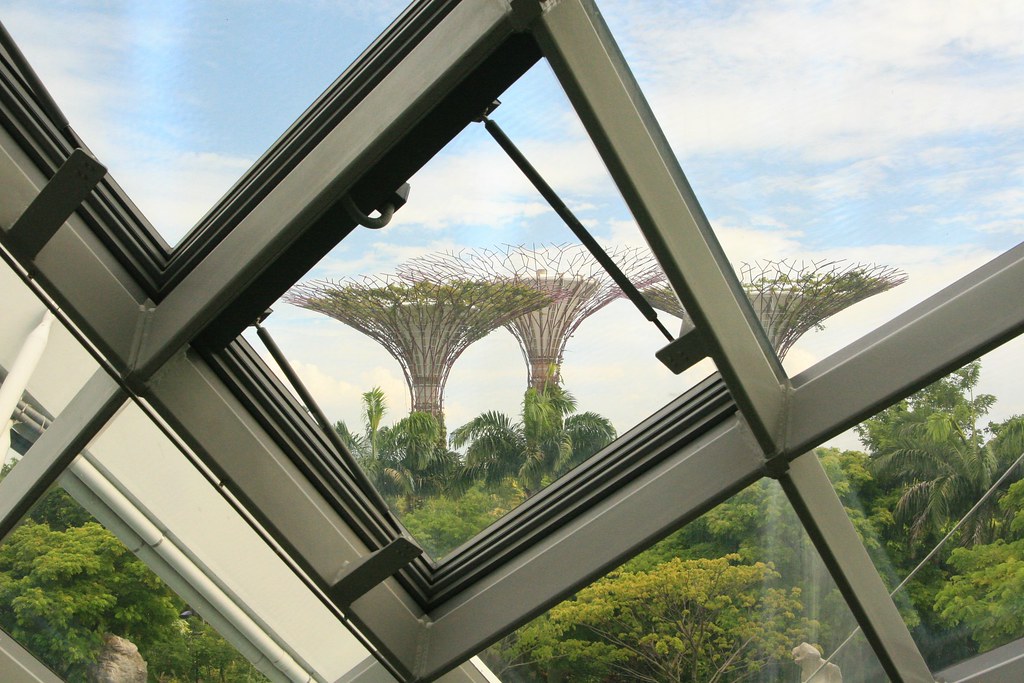 Singapore's supertrees are probably one of its most famous sights, along with the three-pillared and surfboard-topped Marina Bay Sands. The Supertrees are huge, futuristic structures towering into the sky, with scientifically regular branches fanning out all around, lights nestled among them. At night they light up to music, and you can climb a walkway which weaves its way through their canopies.  We stuck to the ground however, and wandered beneath them. 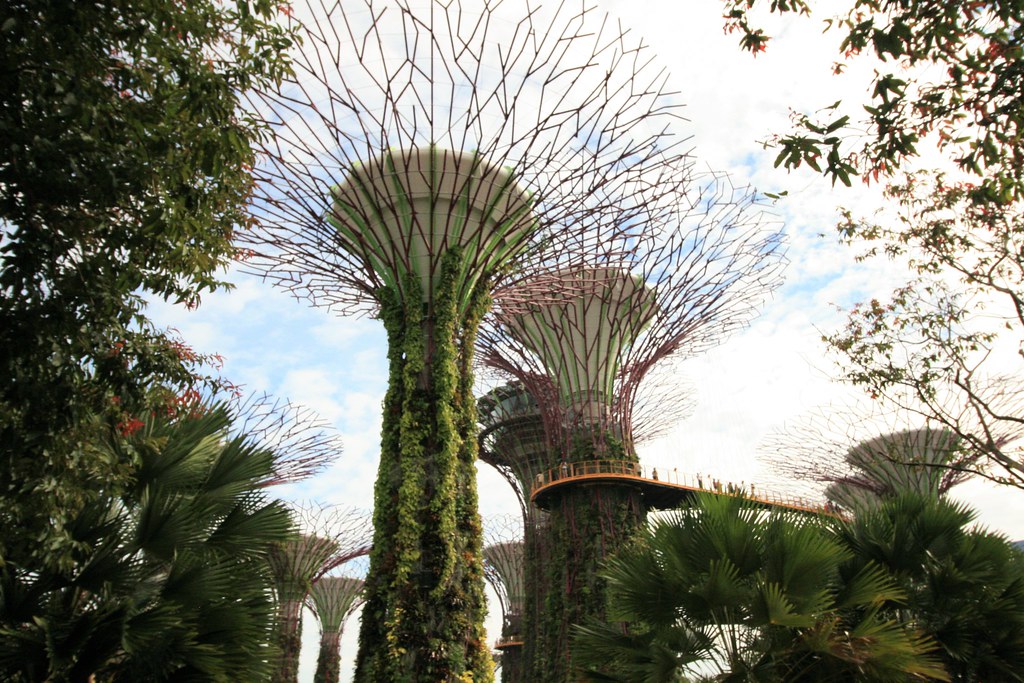 They are pretty fantastic; I had visited them before, and hope to do so again one day.
Feeling a little tired, we headed for the airport. My brother, who was flagging somewhat in the heat, couldn't face dinner. This has never been an issue for me and so I had three dinners at the airport on "Singapore Street"; a sanitised airport version of a hawker market. I ate a dosa, hot and freshly griddled to order with selection of Indian dips. Then I tucked into piping hot Thai spring rolls with sweet chilli sauce. And finally I found Chinese vegetable stir fried noodles. All were delicious and scarfed down by yours truly with impressive gusto. My brother just watched. I love Singapore food. And in my defence, being up for 30 hours in a row makes one rather hungry.
We piled onto the plane, feeling a tad wobbly with tiredness but we only grabbed a couple of hours sleep. It didn't really matter.  We were on our way to New Zealand after all...

P.S. One day I hope to return to Singapore and explore more properly: both my visits have been two short.  There's so much still to see!
Posted by Miss Smith at 06:30