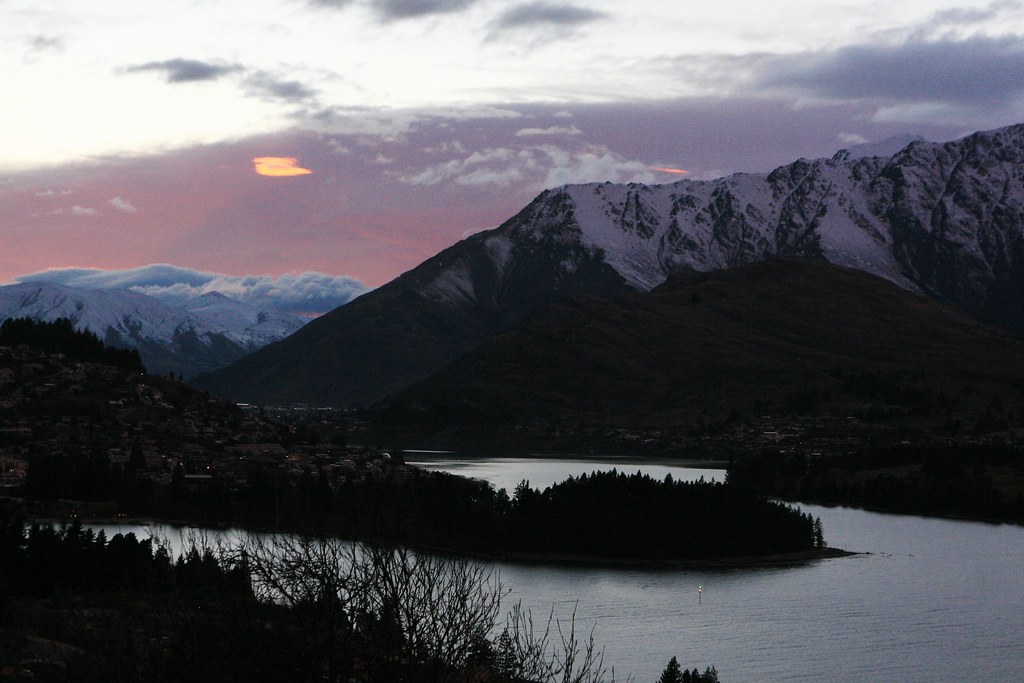 On my Contiki trip to New Zealand in August, we spent 4 nights in Queenstown on the South Island. I wish I could have spent more time there, actually.  It's such a beautiful town with so much to do, and I really had the wrong impression.  I had anticipated it being all about partying (I'm not really a party girl) and bungee (I am 100% not a bungee girl), but instead I found incredible scenery and exhilarating adventures, wrapped up in a package of lakeside cafes and friendly locals.
On one of the days, we had booked to spend a day Funyaking: kayaking up the Dart River and exploring the area by boat, and a nice active way to take in the fabulous scenery. We had an early start and were up first thing to discover our lovely clear sky from the night before had disappeared beneath a cloudy blanket of fog. And rain. Constant rain. 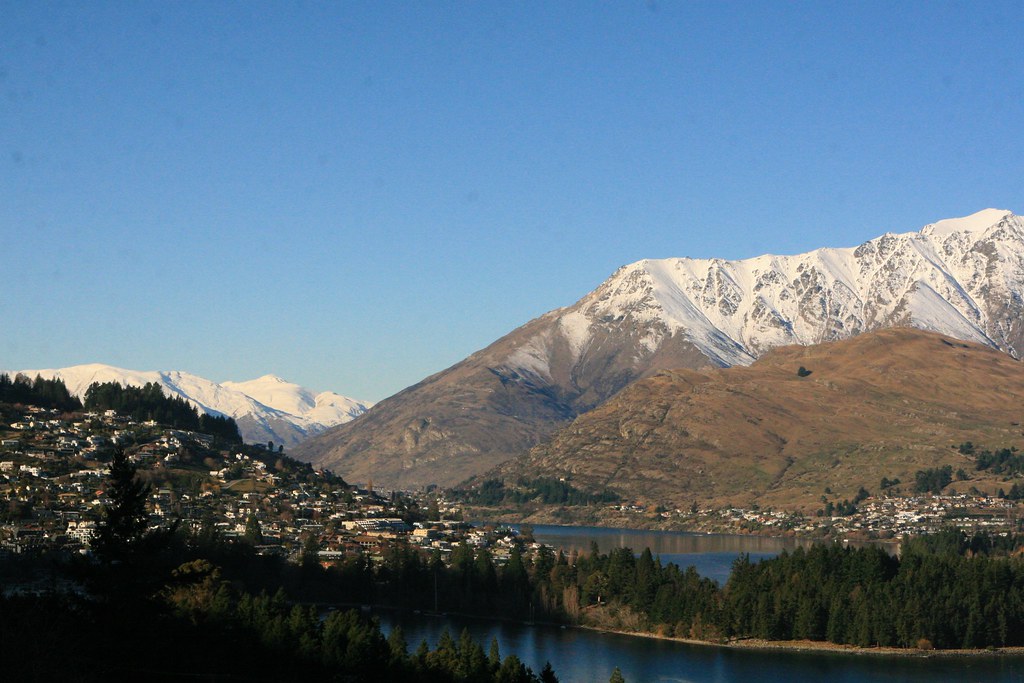 This is the view we wanted.  It just wasn't what we got.
Undeterred the Funyak guys picked us up and took us along the edge of lake Wakatipu to Glenorchy, the Funyak base. Given the rain and the cold, they offered us the chance to cancel or rebook another day. A few people opted to do this but we pressed on undaunted. Or at least only a little bit daunted; we had pluck enough between us.
We were kitted up pretty thoroughly with wetsuit, 2 fleeces, waterproof, lifejacket, wetsuit socks and boots and gloves. Also 2 buffs apiece round our necks, yanked up to go over our noses and mouths, and a woolly hat. Plus they gave us an extra, long waterproof for the first leg of our adventure: jet boating.
Jet boating was chilly but still good fun. We did 360 turns and zipped up the Dart River. It's very shallow in lots of places and splits into tons of different channels as it makes its way down the flat floor of the valley. Huge mountains rise on either side. Each time it rains, the river changes course as the route is unstable and the water level seems to change regularly depending on how much snow melt there is. As we were visiting in a cold snap, there was fresh snow up on the mountains and it was freezing rather than running down the mountains. Therefore low river! 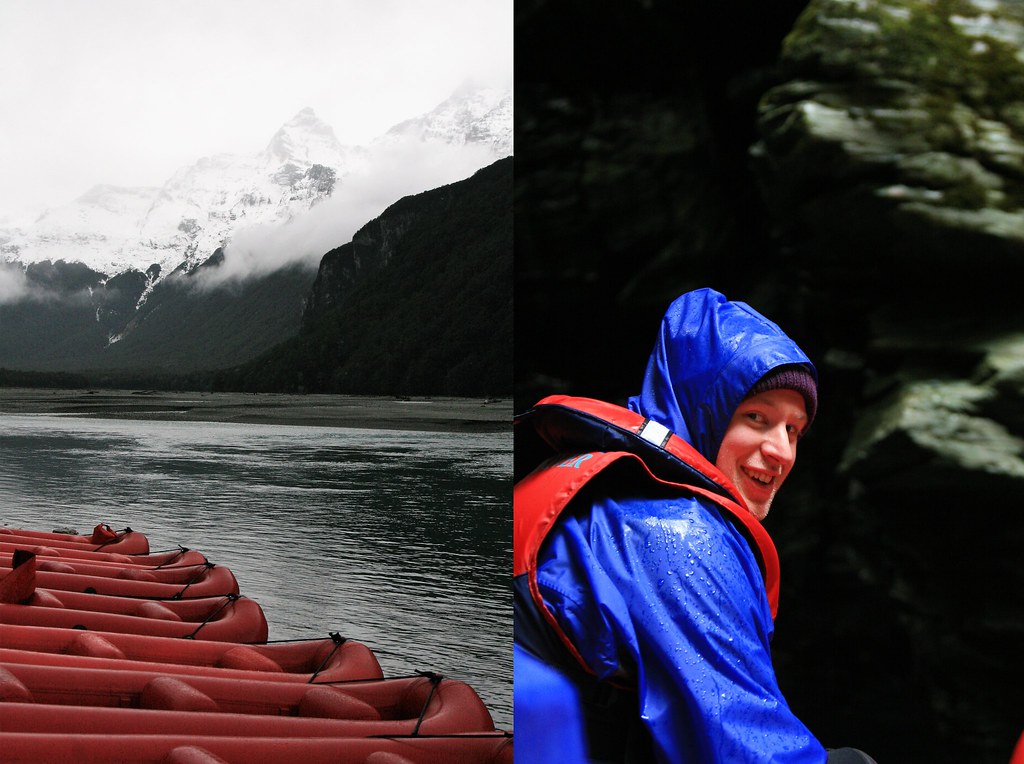 Everyone jumped off the jet boat at the kayaks. They were bright red and inflatable, with three inflatable seats spaced at intervals to perch on top of. We had a quick paddling lesson and then then the six of us from Contiki formed a group under the guidance of a kiwi by the name of Phil. Other, more sedate tourists formed sensible groups with other guides and we began our paddling adventure up the Dart River.
I shared with Matt (my brother, and travel buddy on this trip) and Amy from Canada. I was put in the back and in charge of steering. While the other two paddled on the left and were the engine of the boat, I had to sit sideways and paddle on the right, being the rudder. When we were going forwards I would paddle as normal. If we wanted to steer, I moved my oar in sweeping motions behind the boat to get us to turn.
That was hard work!
We were warned to follow our guides closely to avoid getting accidentally sucked into the wrong channels of the river.
Our first move involved both Contiki boats immediately getting sucked into the wrong channel of the river, spinning around to make our paddling totally useless and Phil jumping out of his boat into the icy water to grab hold of both our kayaks and manually haul us out of the river and back on course.
That aside we were pretty good! At least, out boat was. Ish. The others didn't suck so much as experiment with paddling the boat backwards, or sidewards or into the bank. We mocked them in an encouraging way.
Each time we set off to paddle a new section of the river, the Contiki boats started off at the front of the whole group and finished last each time. It wasn't poor technique or ineffectual paddling, it was simply that we were trying to maximise our time on the water. Clue's in the name: FUNyaks.
And the funyaking was fun - perching up on the inflatable boats and paddling in a three, avoiding slip streams and riding other currents to bowl us along, and occasionally spinning and grounding to a halt in shallow water. Until Matt clambered out and pulled us back in. 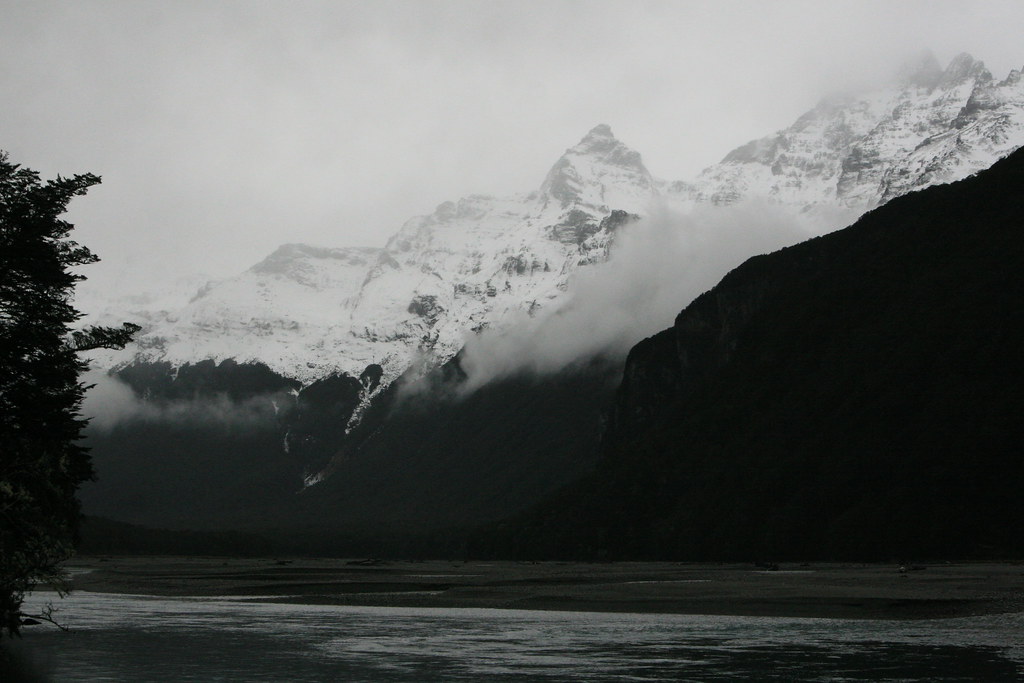 The rain continued steadily for the morning, but it leant an air of gothic mystery to the views. Mountains loomed on each side of the river, hunkered down to wait out the weather, huddled into misty cloaks. I think they were watching us, silently judging, their expressions formidable and wreathed in clouds. 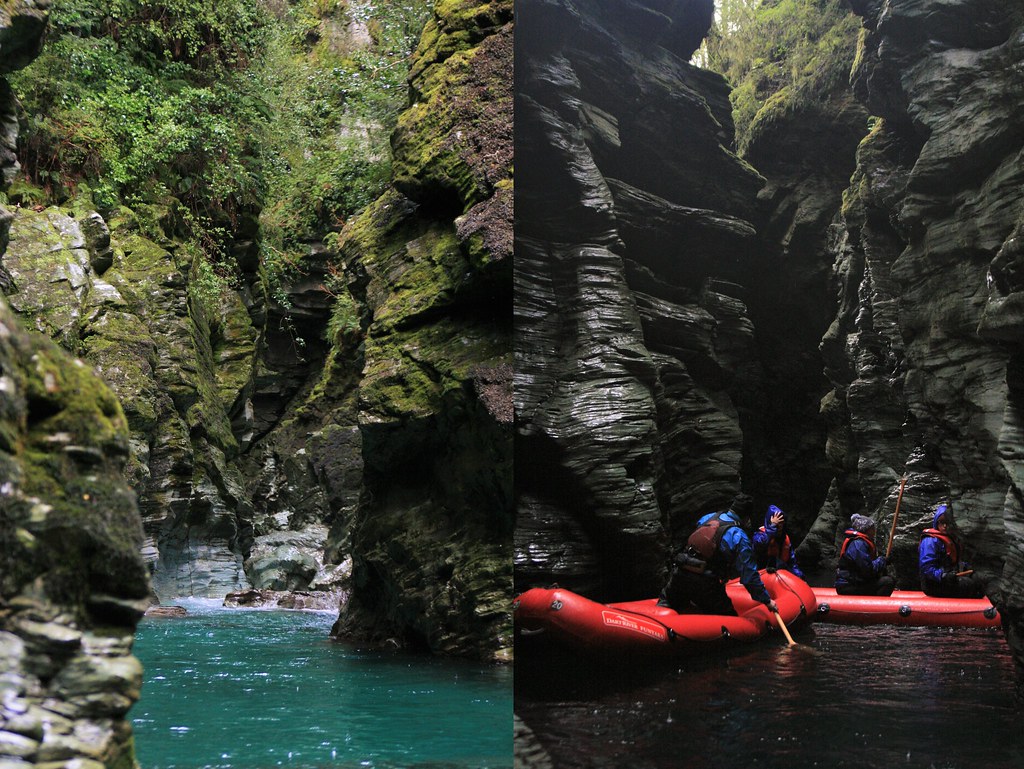 Eventually, we abandoned our course upriver, hauled our funyaks out of the water and walked a little way through the surrounding forest. There we found more funyaks in a narrow gorge, climbed in and paddled out way along through much stiller, deeper waters. It was stunning, and as we slid the boat up a fissure in two rock faces, I couldn't help but peer into the water; very clear and blue, but so deep we couldn't see the bottom. It made a stark contrast to the shallows of the Dart. The chasm we explored had ferns growing out the top, and. trees and mountains were just visible way up overhead. In the moody weather, things were still and quiet, and it seemed that everything was taking shelter and holding its breath, keeping out the rain.

Floating back down the gorge, we made it back to a little hut for lunch: soup (so good, so hot, so desperately needed) and bread, tea, fruit, cake, including NZ lolly cake (condensed milk, crushed biscuits and marshmallows) and brownies and banana bread.

Yum. Actually, having used so much energy funyaking, I hoovered my way through piles of everything. 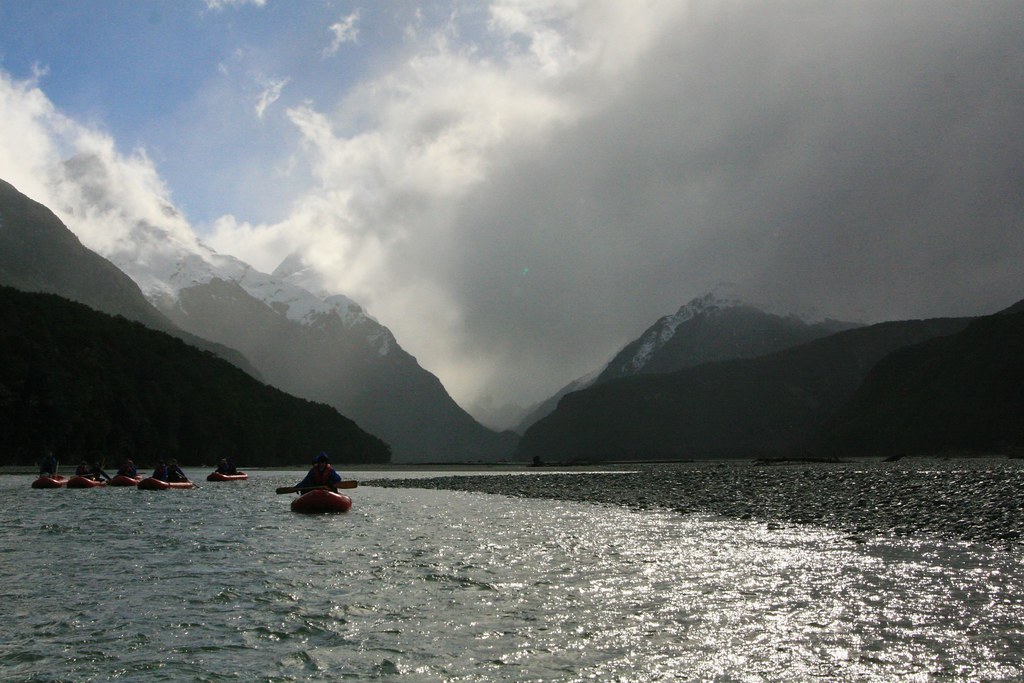 After lunch, we funyaked back down the Dart again. The rain finally trickled to a stop, the sun emerged and the brooding grey if hunched up peaks transformed into glorious mountains. Phil told us about his idea for new form of wellbeing: canoga (canoe yoga). He could genuinely do a headstand on the inflatable seat of his floating Funyak. Awesome. I attempted a tree-style pose from the one yoga class I had taken ever, and quickly found that balance is all but impossible and gave up. We recommended that Phil charge extortionate fees for retreats and have a low budget TV ad where if you sign up for the premium canoga package you get an inflatable canoe to use at home. 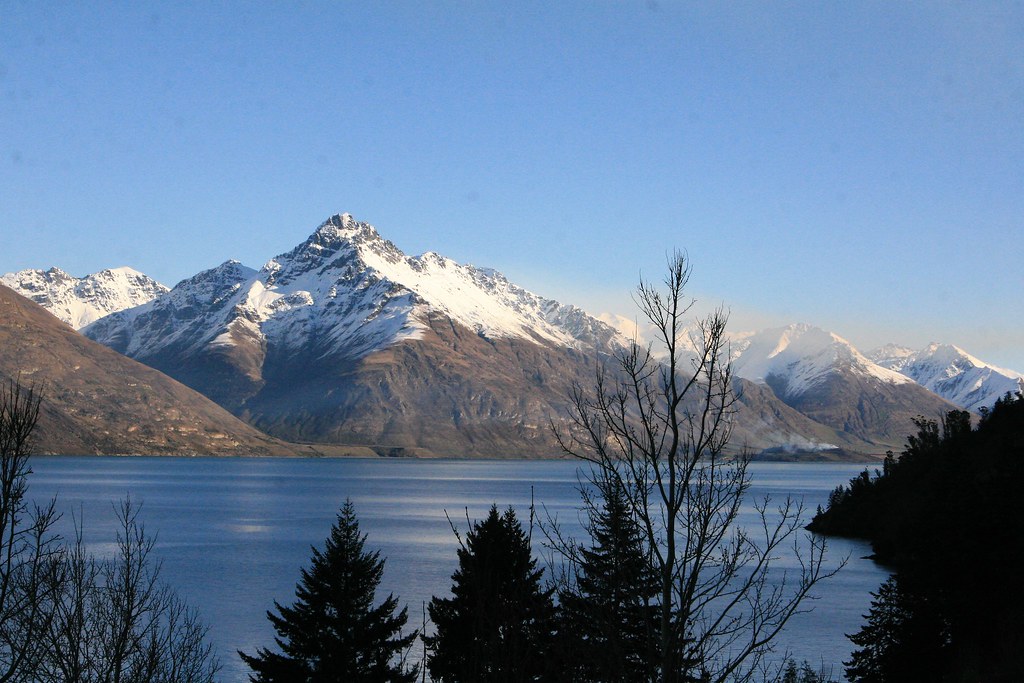 Eventually tootling back to base, we hauled the funyaks from the river, deflated them and drove back to Glenorchy. Phil pointed out locations from Lord of the Rings enroute and also mentioned that the mountains in these parts were used in Swiss chocolate advert. Apparently New Zealand looks more like Switzerland than Switzerland. 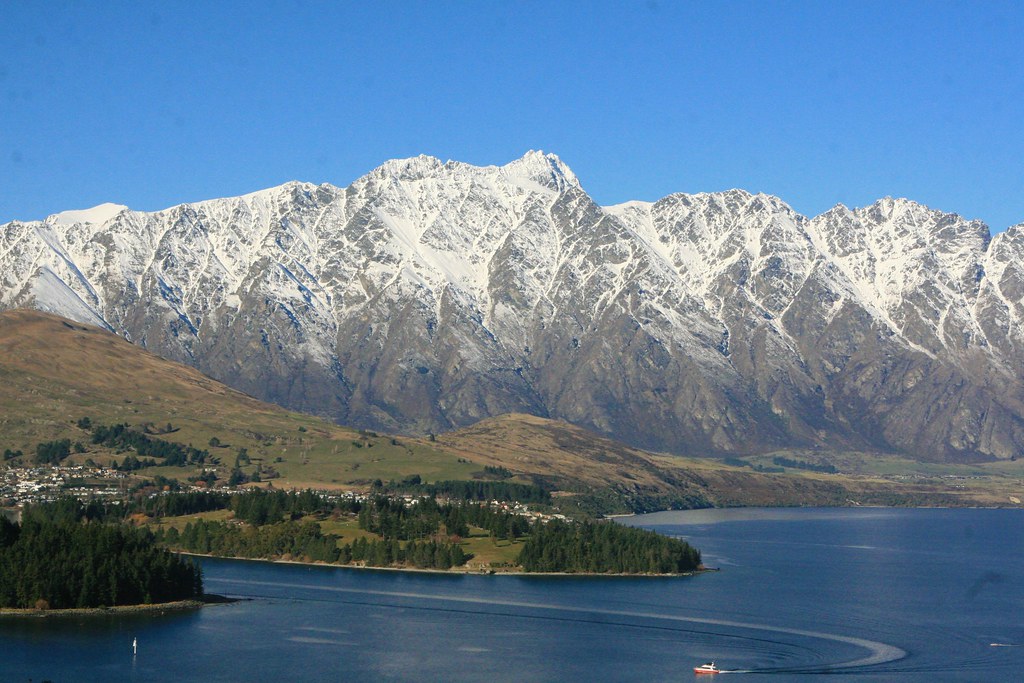 We peeled off our our gear. Sweet. And got a ride back to the hotel where I had a shower. Even more sweet.

In the evening, I rolled into Queenstown with Amy and hit Fat Badgers for pizza. It was delicious and I scarfed down my whole pizza very quickly and wished for more;  Amy couldn't finish hers. I'm definitely a glutton. 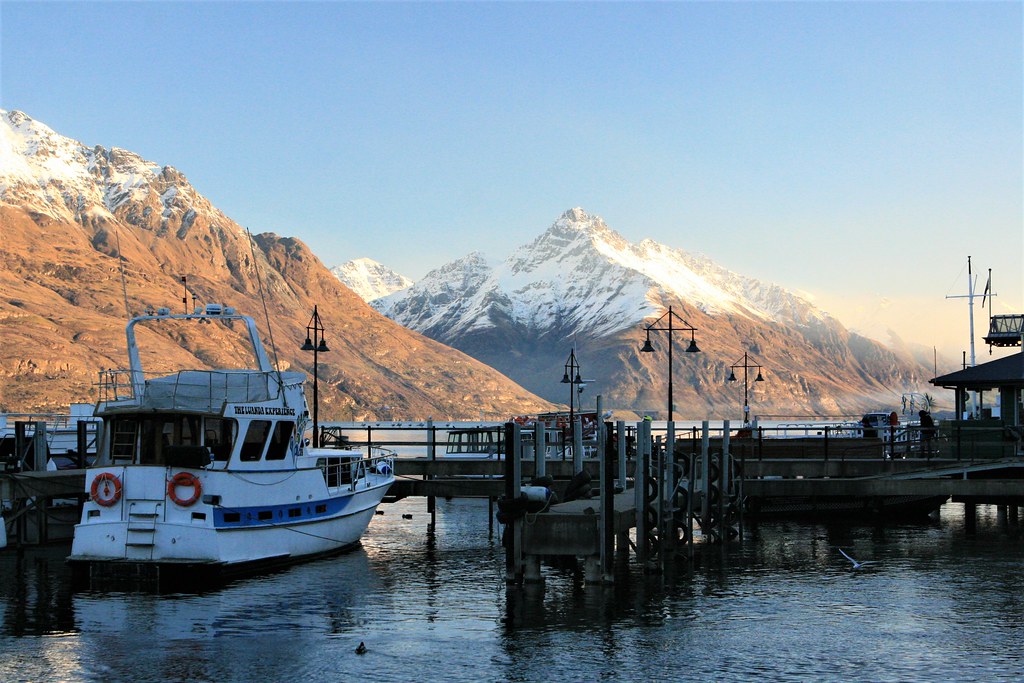 Swinging back to the hotel, our group  of new Contiki buddies eventually wound up in my room and we had tea and gossiped about the people on the trip, reminisced on our adventure  so far and looked forward to the next phase!

P.S. I would happily go back to Queenstown.  Maybe one day!
Posted by Miss Smith at 06:30