The Buddhist Temples at Borobudur 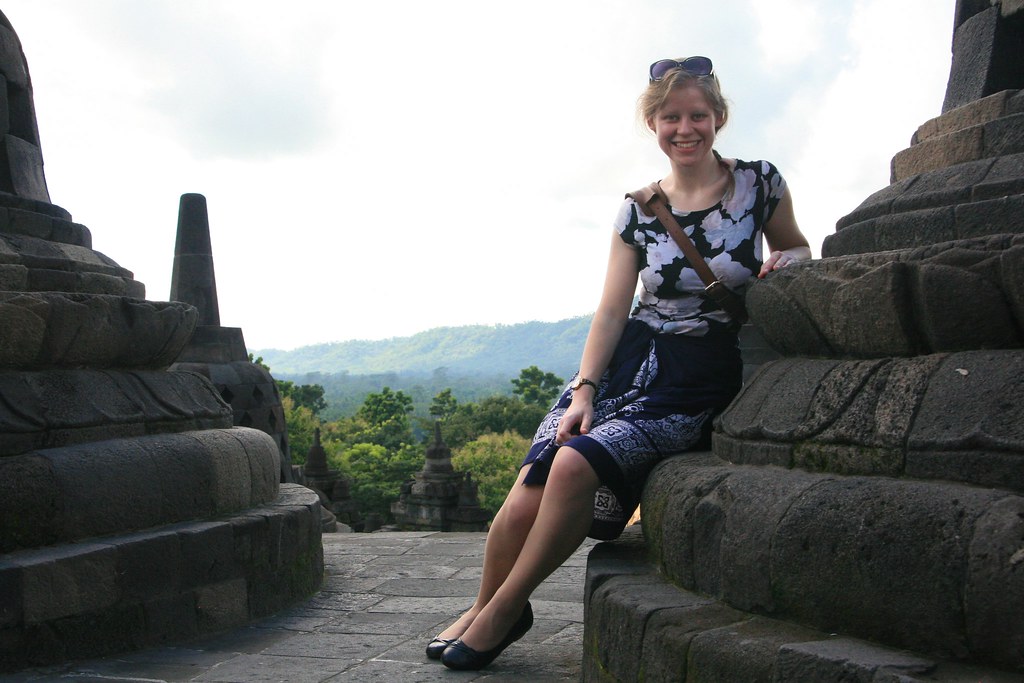 It has been a completely manic couple of weeks at Curious Headquarters: I have moved to a new place, hauling my stuff across London (with the much appreciated help of friends and family), I have written school reports for 5 classes, organised and run an International-themed weekend away in my role with Girlguiding (helped along this weekend with a terrific team of leaders), held a fundraiser for our Guide unit, and also simply had to attend important gatherings with friends involving meals out, cocktails and a wonderful evening trying on and selecting my bridesmaids dress for a friend's wedding. Let's just say there have been many nights spent burning the midnight oil followed by crack-of-dawn mornings. While there's been lots to love, I'm quite glad of a little break to actually unpack, gather my thoughts and catch up on a few extra winks of sleep.

The upshot of this is that I fell of my own blog schedule for a week.  But I'd like to get it back on track this week, stealing wifi from work until I get some into the flat. Therefore I bring you a little photo story of the time I visited the temple complex of Borobudur on the Indonesian island of Java.

I visited Indonesia for a grand total of about 3 days back in 2015, but definitely managed to make the most of the time we had. In that time, it was wonderful to visit Borobudur: a Buddhist temple complex that seemed aeons old, filled with a calm and spiritual beauty that made it very easy to understand why so many people visit. 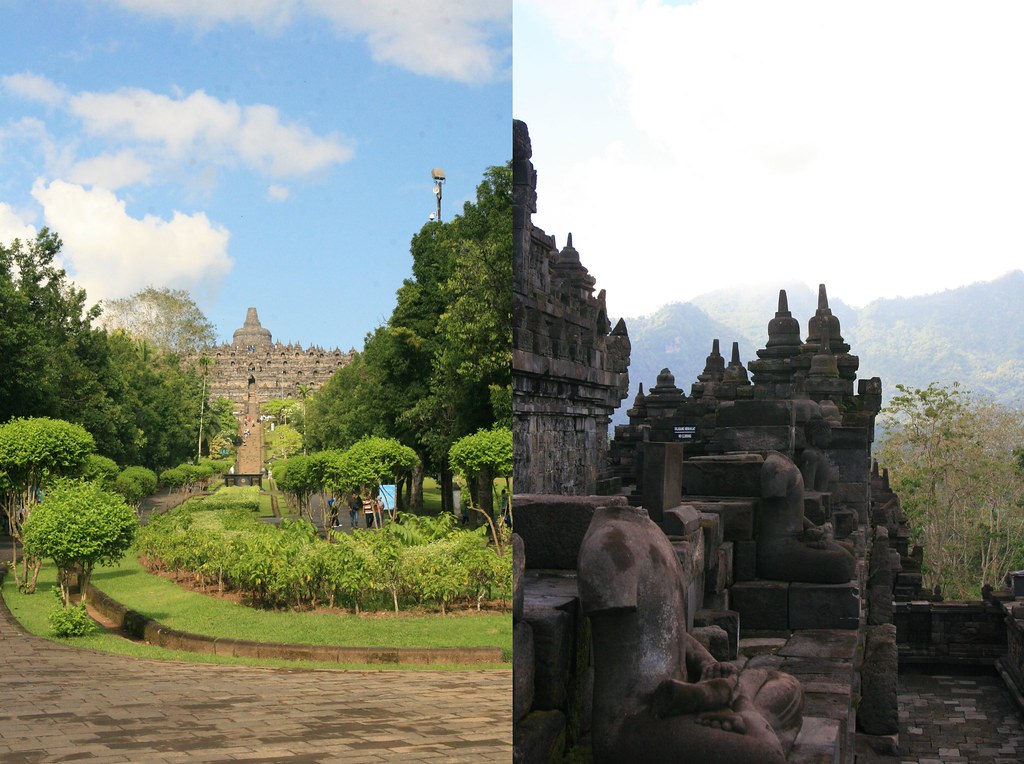 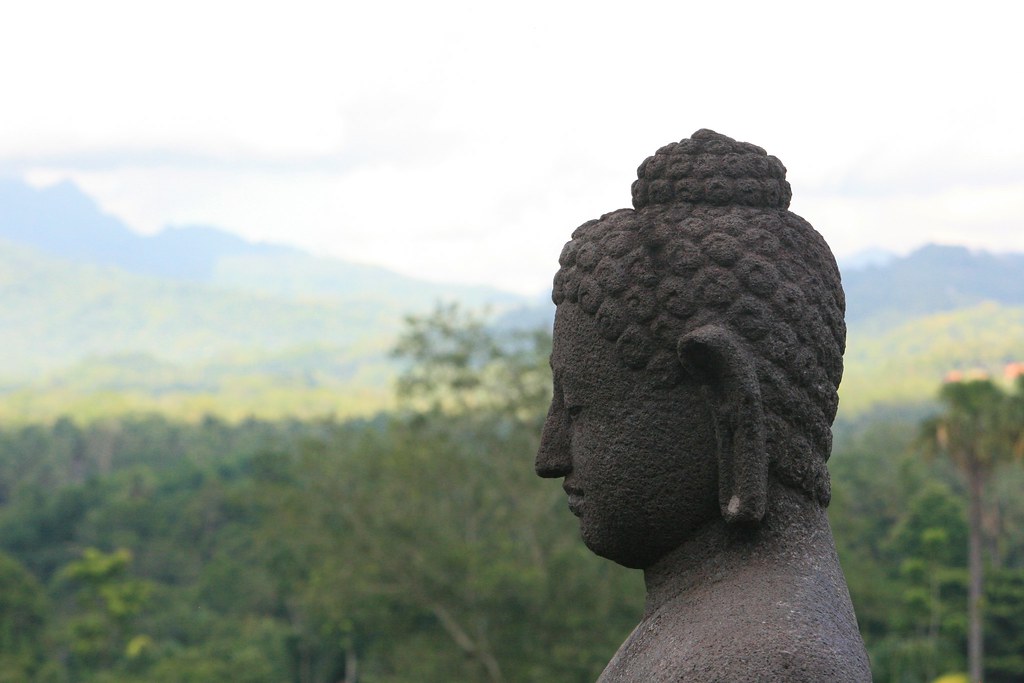 Borobudur was hidden from the world at large for much of its history. However it was brought to the attention of Sir Thomas Raffles, then British ruler of Java, in 1814.  Efforts have been made to restore and preserve the 1200 year old temple, and it retains an otherworldly atmosphere of peace and mystery. In fact, the history of Borobudur is really quite fascinating, and it was very interesting to have a Guide to share some of his knowledge. 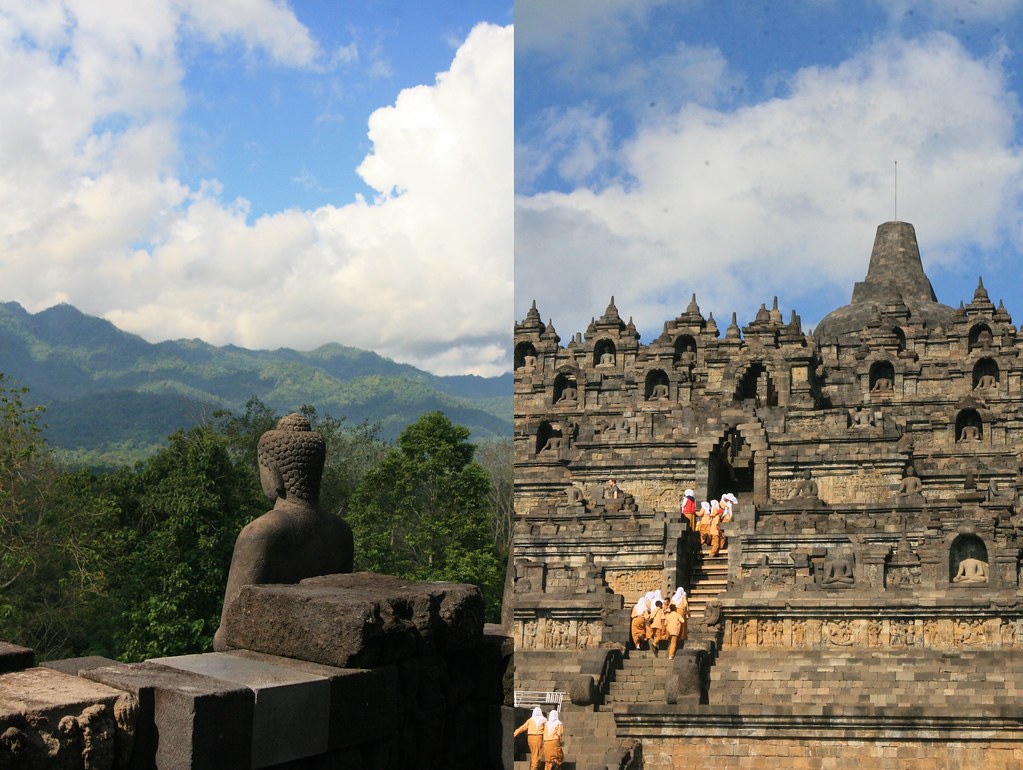 The climb to the top is no insignificant, but it was absolutely worth the effort in the humid climate.  It was simply beautiful. 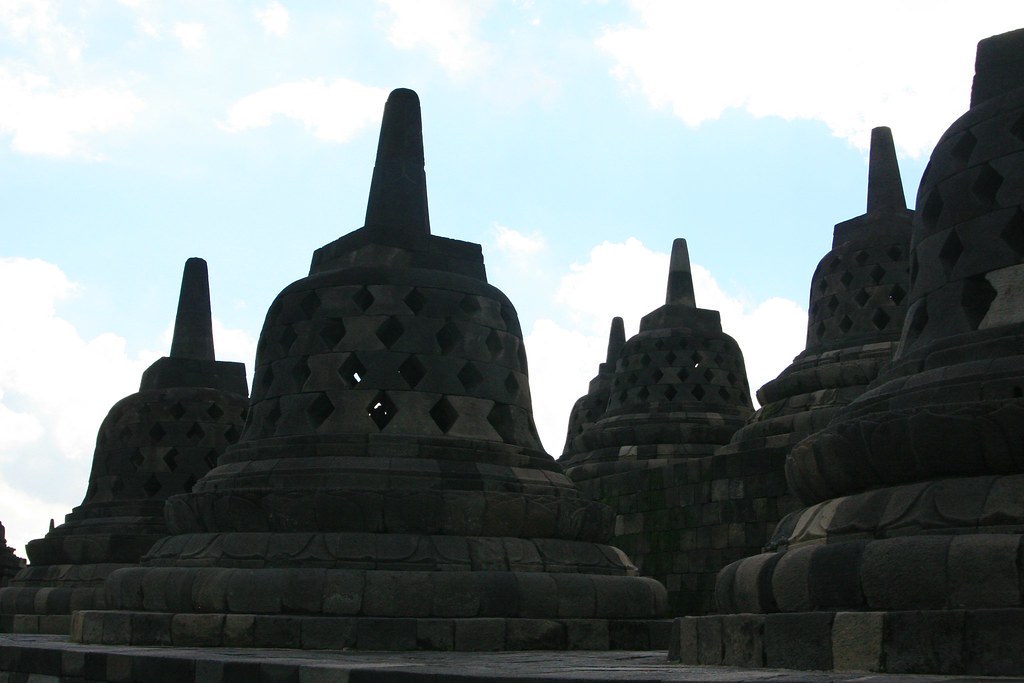 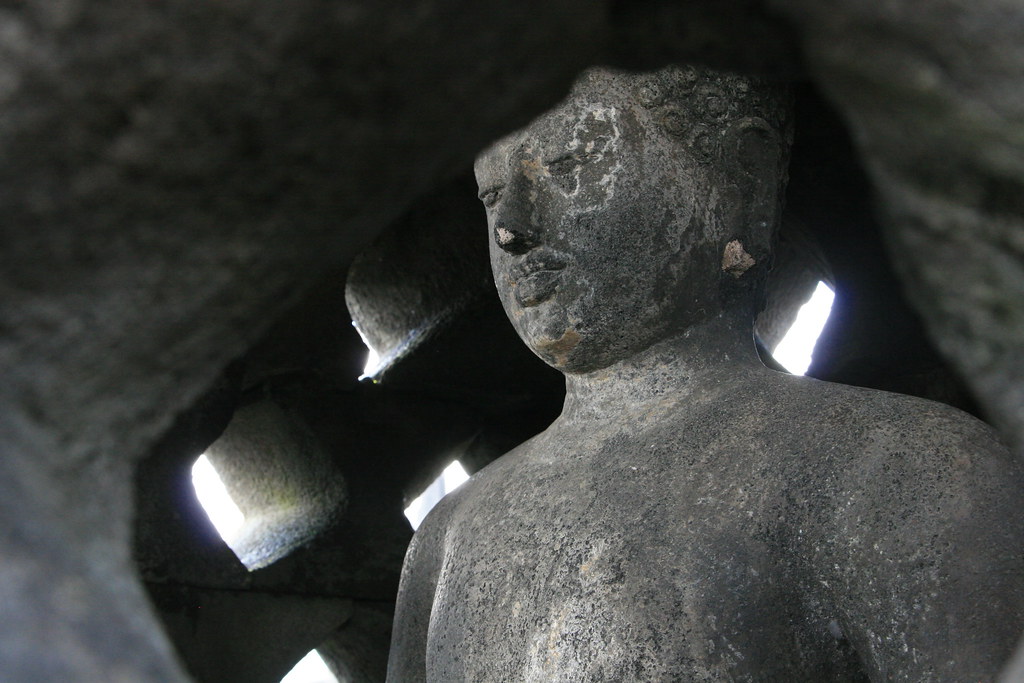 Each tier of the temple is crowned with stupa; bell-shaped stone structures containing Buddhist statues. Each Buddha is seated in the lotus position, but the hands vary slightly from area to area within the temple. The stupa give the temple an incredibly distinctive silhouette. 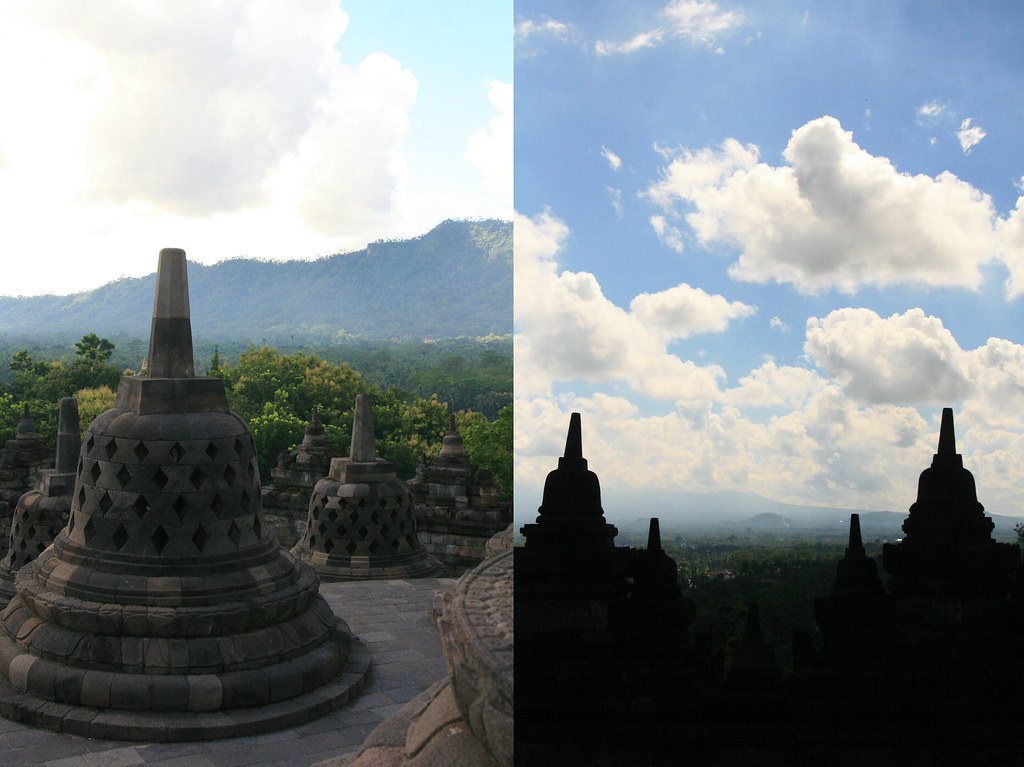 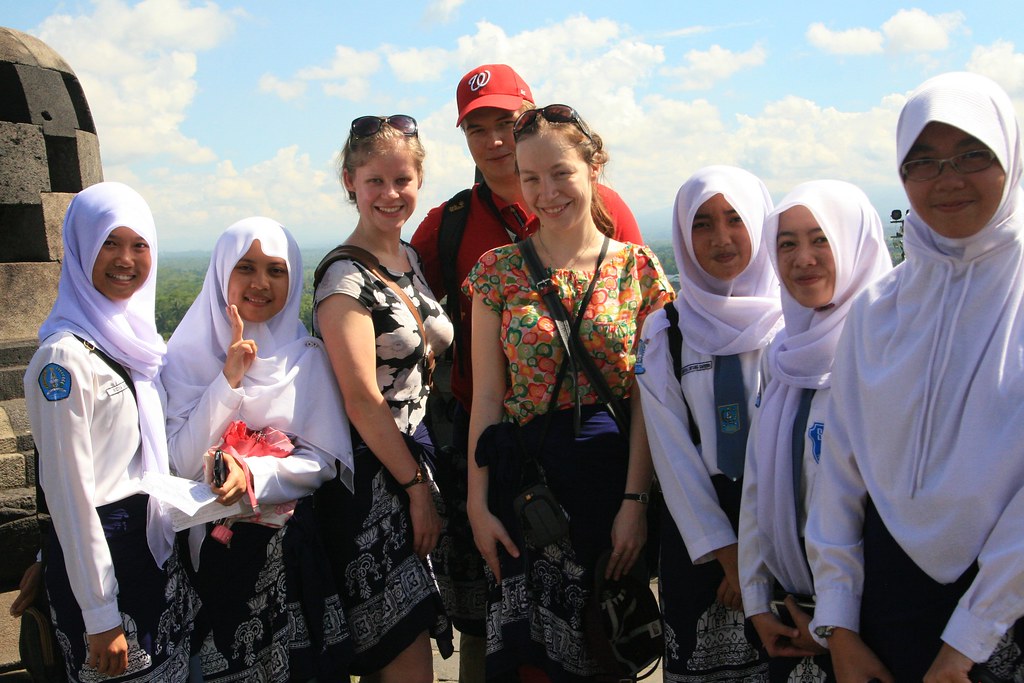 While we were exploring the upper levels of the temple, we were approached by a party of school girls; apparently they visit the temple looking for tourists so they can practise their English and were keen to do so on us.  We were happy to oblige, but once they had done their duty and read out the requisite English sentences on their notes of paper, they were much more interested in taking selfies with us.

P.S. Hopefully newly scheduled programming is now restored to Journal of Curious Things.  Although I must confess I'm definitely ready to have wifi back in my life. Only another couple of weeks to go!
Posted by Miss Smith at 06:30