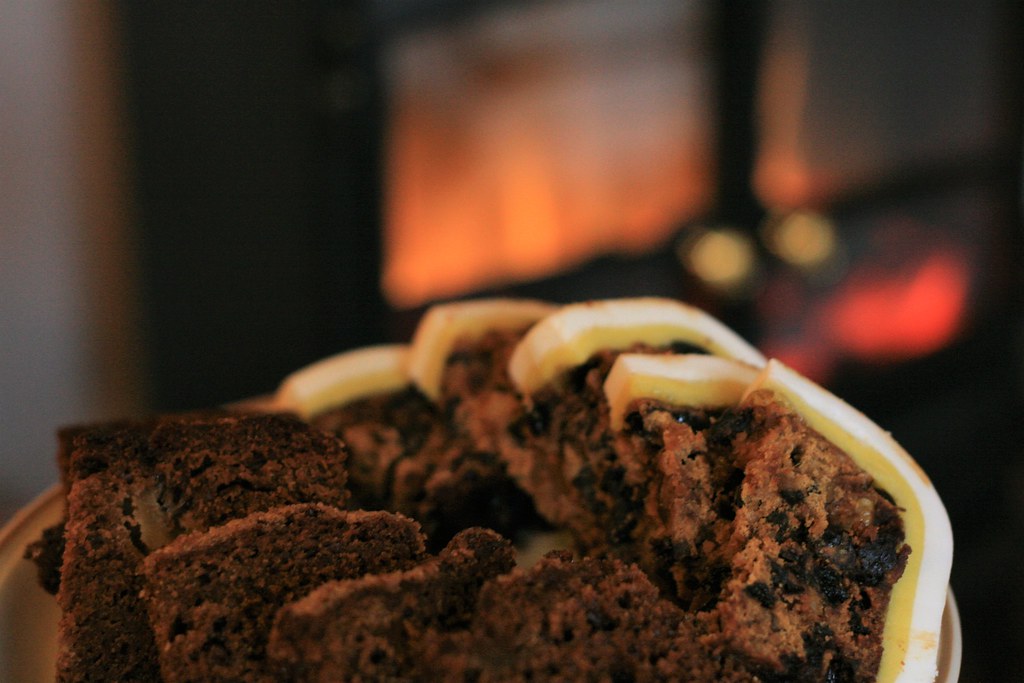 One of the things I love about the festive season is the food! Everything seems to smell delicious; it's as if the scent of cinnamon is permanently in the air. Despite this though, I have actually made many of the more traditional Christmas bakes, and that includes Christmas cake.

I'll be honest; Christmas cake isn't my favourite thing in the world. I don't dislike it, but I prefer a mince pie, or some rocky road, or a big helping of pudding with custard. But I wanted to take a stab at Christmas cake anyway, and my Dad really likes it, so I figured it wouldn't go to waste. Plus I love marzipan so it was also a good excuse to make a cake with an extra chunky marzipan layer. 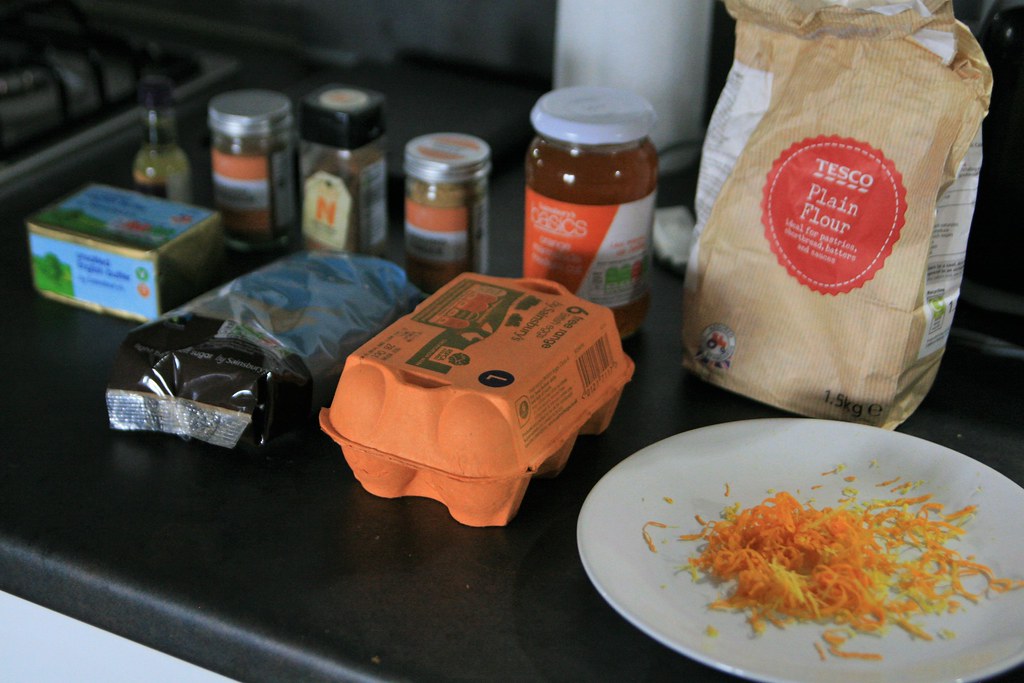 I opted for Nigella's recipe (because I love her) but I made a couple of substitutions, such as adding some chopped nuts into the fruit. One November evening after work found me wandering the food aisles of local supermarkets looking for ingredients and then staggering home under the sheer weight of dried fruit. Seriously, the stuff weighed a ton! 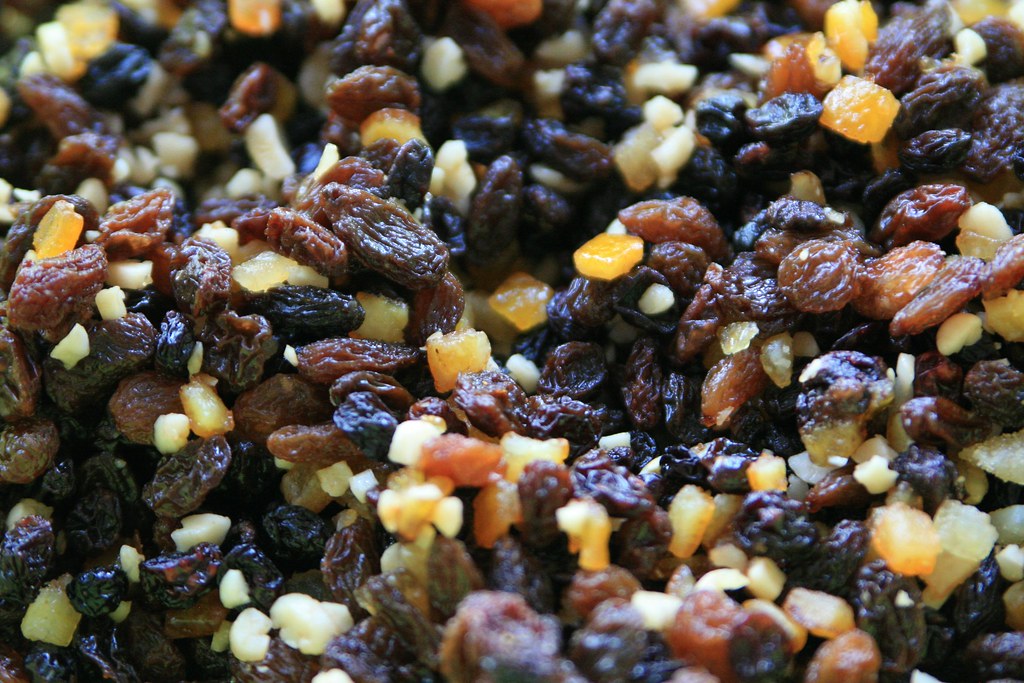 The first step involved mixing all my dried fruit together, applying a liberal quantity of booze and then some, and leaving it all to soak overnight. Again, I made a substitution and used spiced rum for my booze. Partly because I like it better than brandy, and partly because I already had some in the cupboard, and the quantity of dried fruit alone was eating into my food budget.

It did smell good though: glistening boozy fruit all together in a bowl. 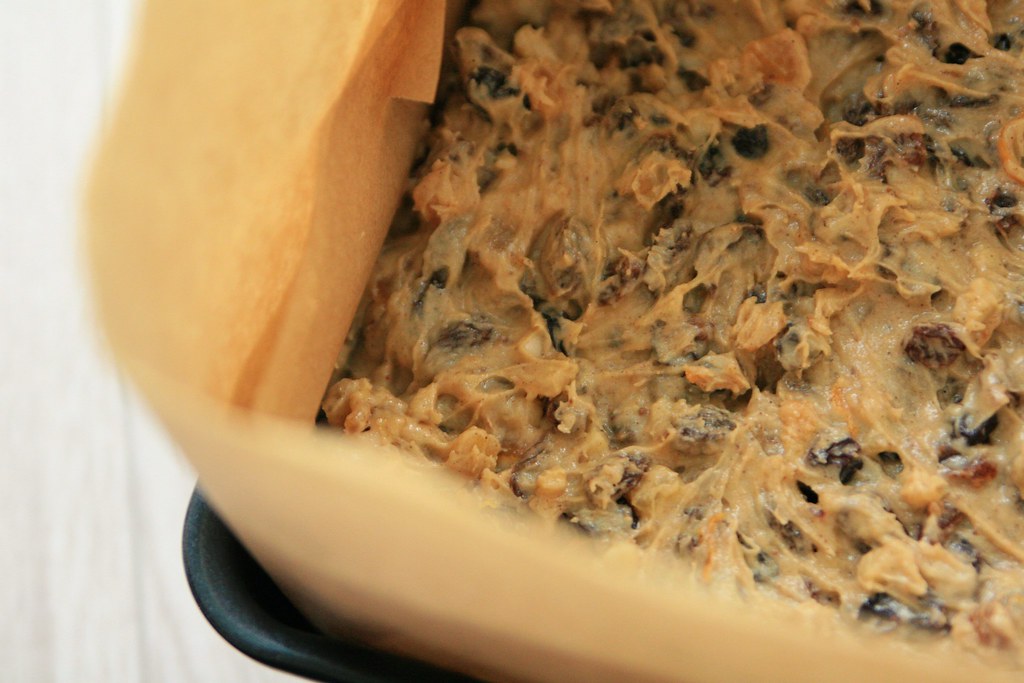 Fast forward to the weekend and it was time to mix the cake. This turned out to be almost an anticlimax.  It was easy and straightforward; I sort of thought that Christmas cake would involve more faff and fanfire.  It turns out it's more an exercise in heavy lifting (yep, still weighs a ton) and building polished guns for all the stirring.

After getting hopelessly confused by the pages and pages of conflicting advice on the internet as regards lining the tin, I gave it up in frustration, did whatever I fancied and baked the cake.  I was pretty happy with the result. 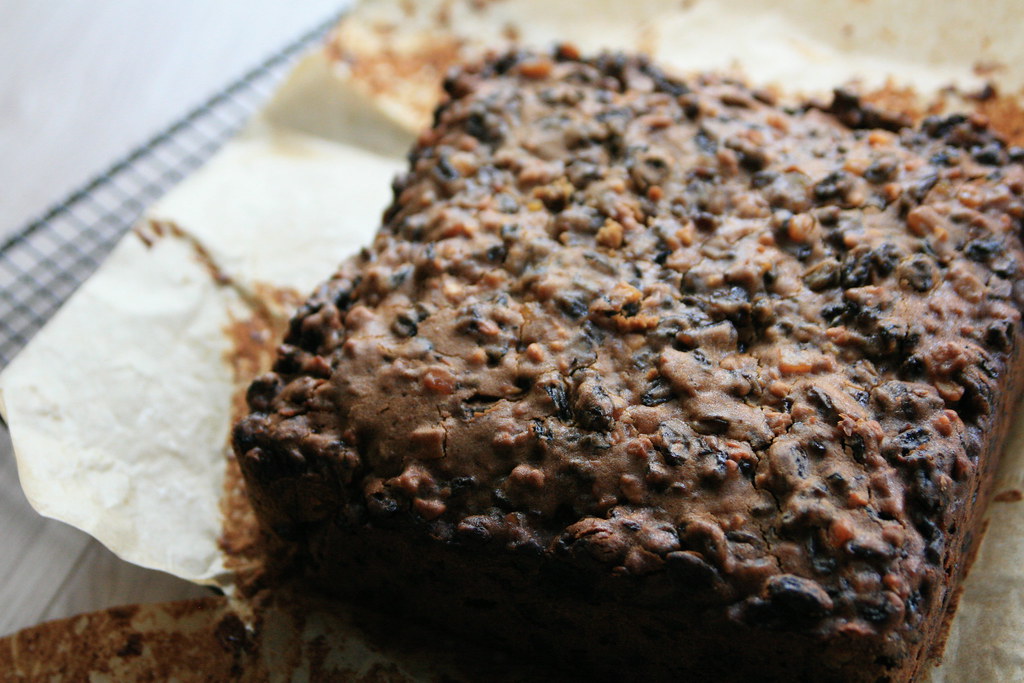 Although having said I was happy, how would I know? I don't think I've ever made a cake before that you have to wait six weeks before trying it to see if it tastes any good. So I hoped for the best, fed it some more rum for good measure and wrapped it up carefully. Again, everyone on the internet had a different opinion about how to do this, all of them swearing blind that if you don't do it their way, your cake will fail and you will let down every single one of your nearest and dearest and you won't be allowed to have Christmas again. Helpful.

I ignored them all, and put my wrapped cake in a storage container because I didn't have any tins or tupperware big enough. And the cake lived with me in the living room quite happily with a good view of the TV. Not enough space to keep it on the kitchen counter, plus I think it enjoyed watching the Christmas movies in its quietly sozzled state as I fed it rum at regular intervals.

Not a bad life for a cake. 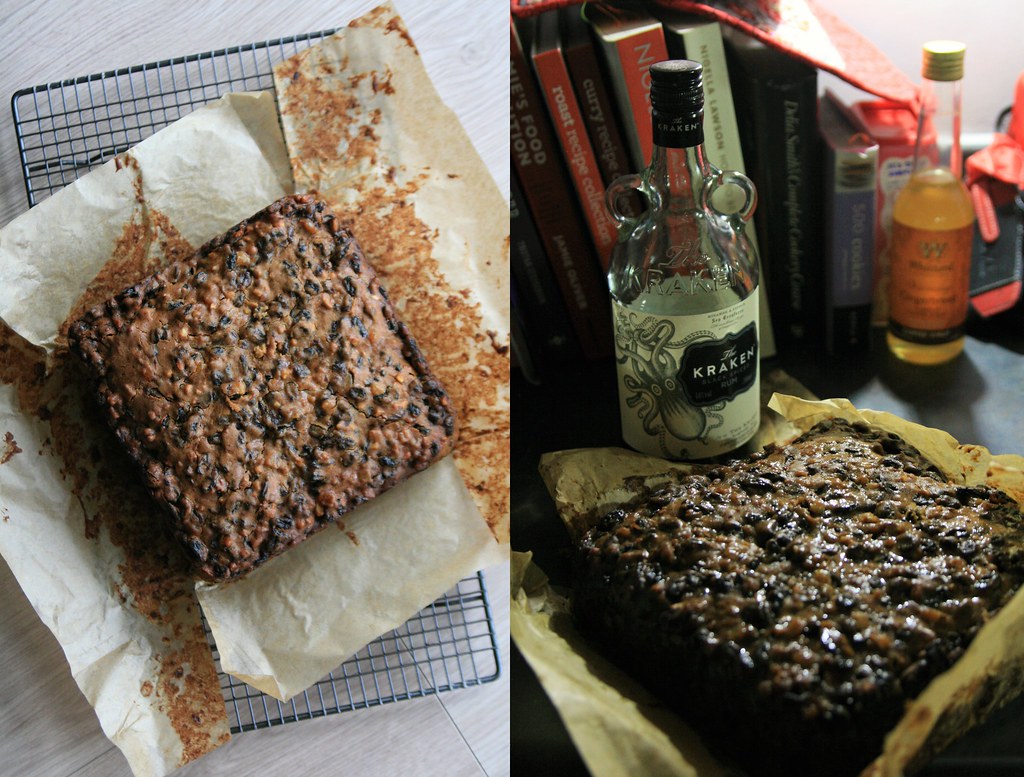 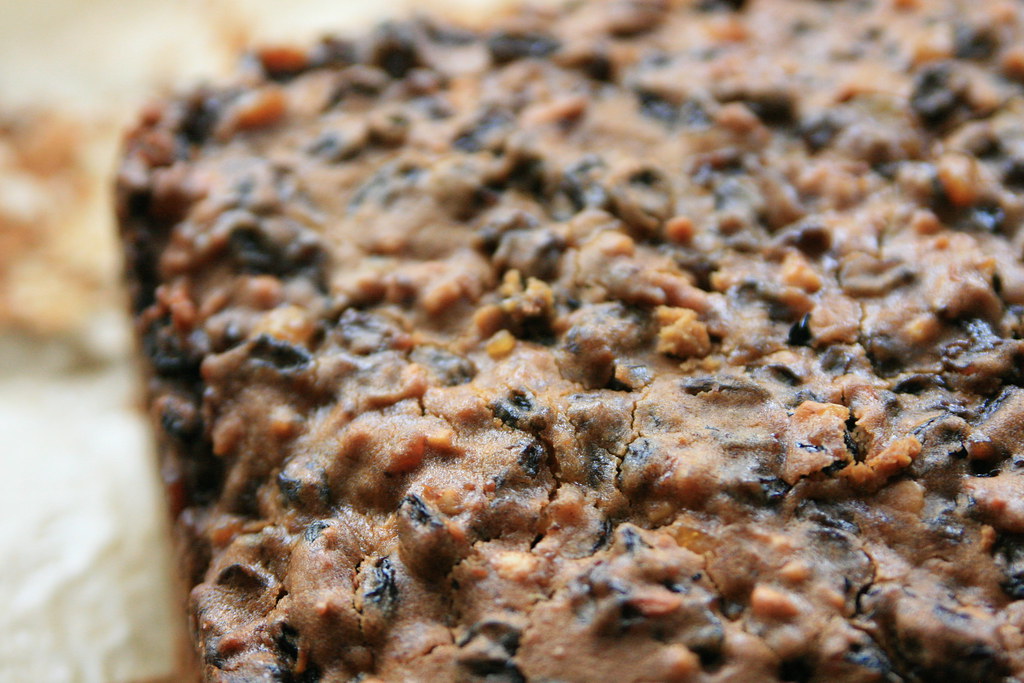 All that remained was to do the icing.  I wasn't prepared to make my own icing, but I invested in industrial quantities of marzipan and roll-out icing from my friendly neighbourhood massive corporate supermarket. I had thought it might be fiddly and I'd make a mess, but both marzipan and icing proved easy to work with.  I used some warmed-up, slightly diluted marmalade as glue (or whatever you're supposed to call the sticky layer in cake decorating - glue sounds unappetizing) and cheerfully slapped my marzipan on, trimming off the ends and scoffing them.

After a while I felt that I probably shouldn't eat that much leftover marzipan in one go so I saved the rest for breakfast the next day.

With the icing, I had no desire to eat the leftovers, but I did manage to roll out a nice, even sheet of the stuff and it moulded round the cake very effectively.  I was a lot more forgiving than I thought it would be, and it was the work of mere moment to smooth out the wrinkles and plaster them down. I learned that a quick polish could make the icing shiny and weirdly, it totally worked.  I've never polished a cake before but it did end up with an almost glowing sheen. Sweet! 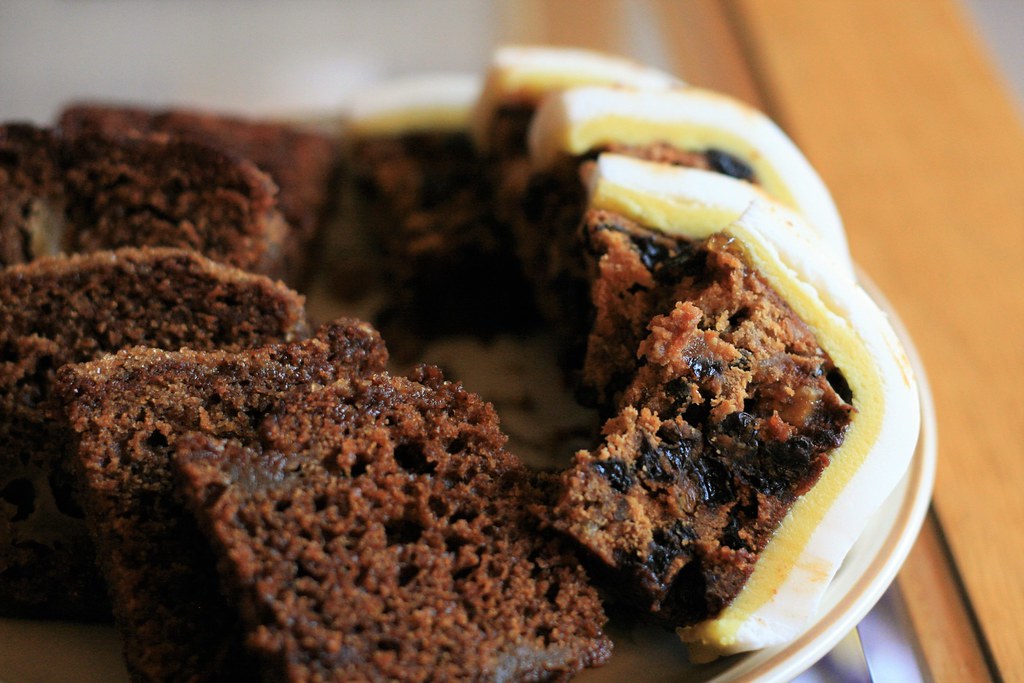 And, having made my cake... I promptly gave it away to to anyone who would eat it, and we all lived happily ever after, the end. Except the cake, which did survive for a good number of weeks before it was ultimately consumed.