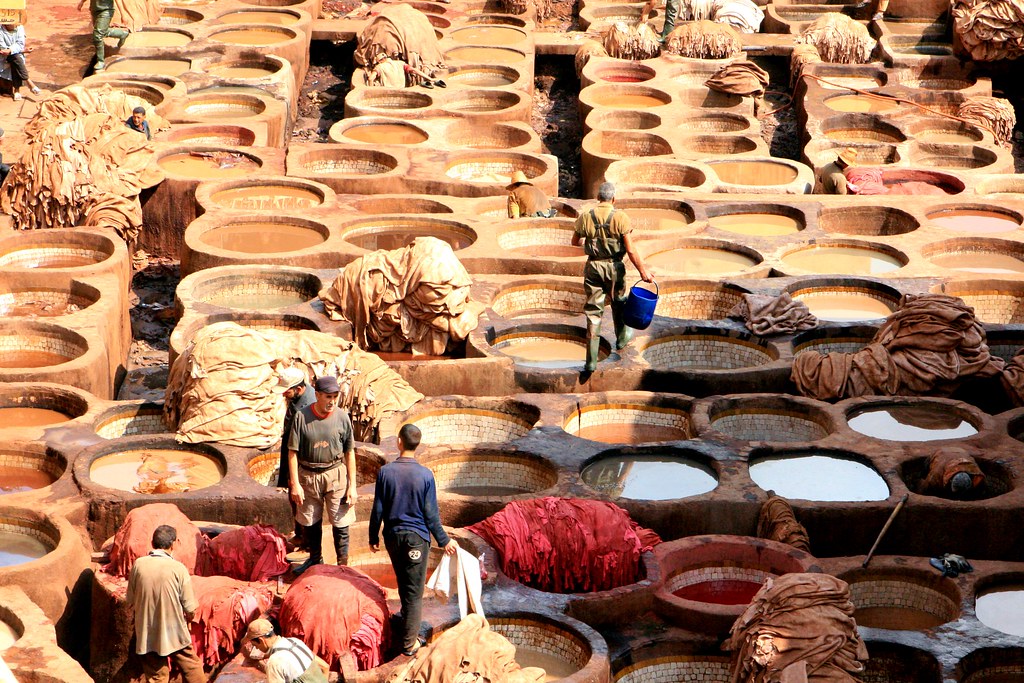 I spent a week over Easter backpacking around Morocco with my friend Liz.  We had the most brilliant time poking into different places, seeing the famous sights and getting off the beaten track in this wonderful country. But my favourite place was Fes and the twisting, winding, maze-like alleys of the Medina. I have a few stories to share today of our time exploring this fascinating slice of another world. 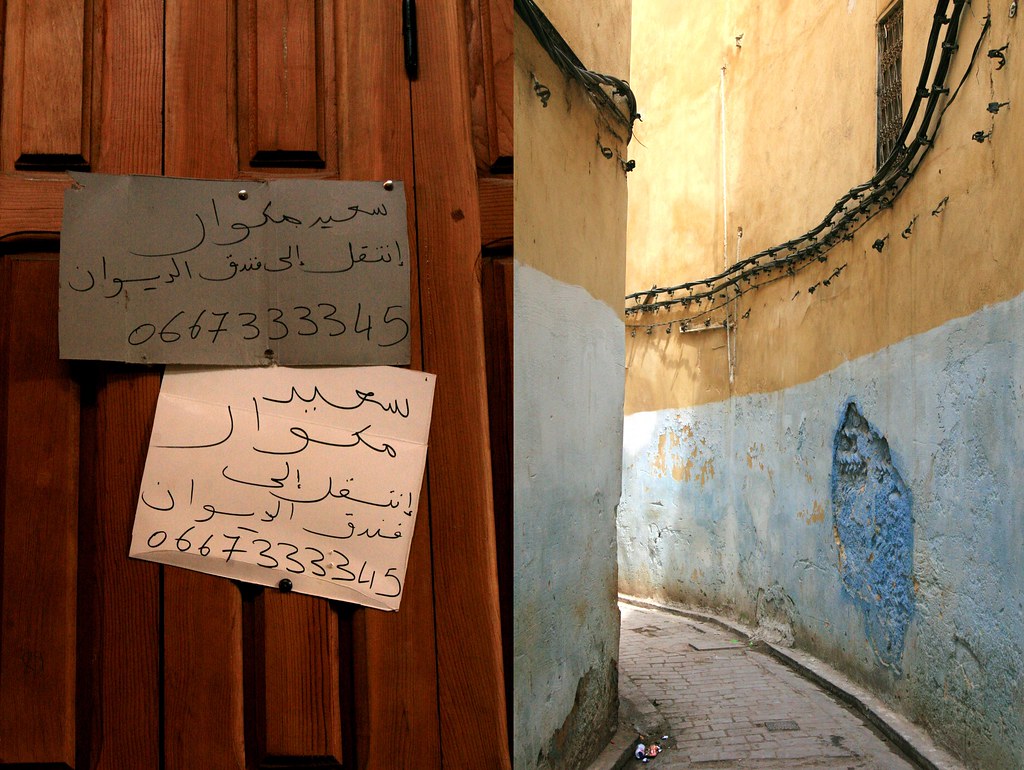 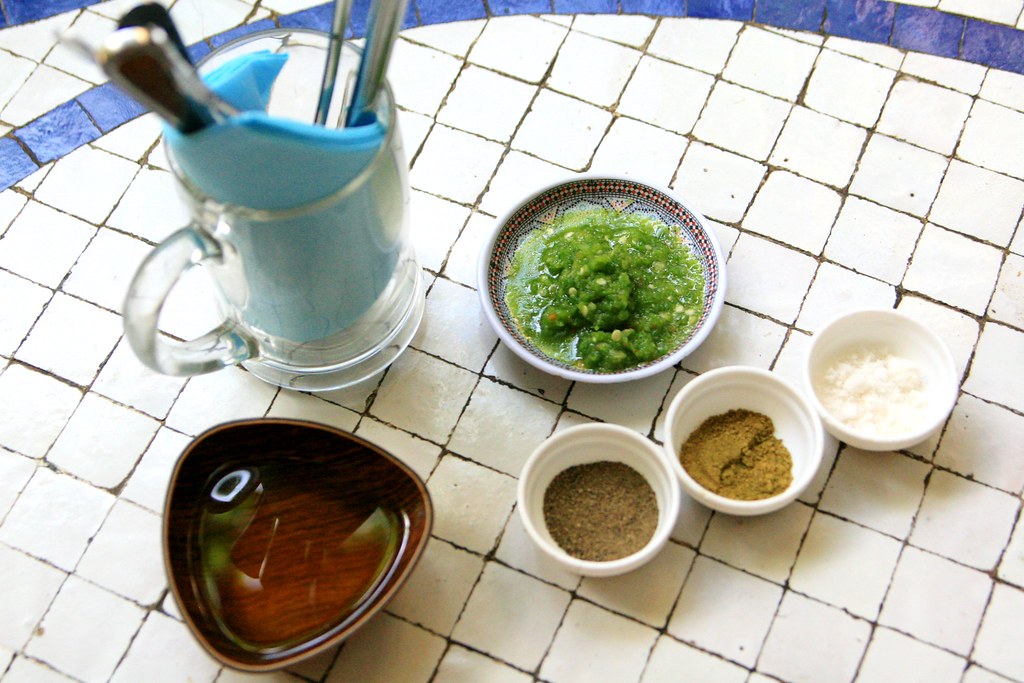 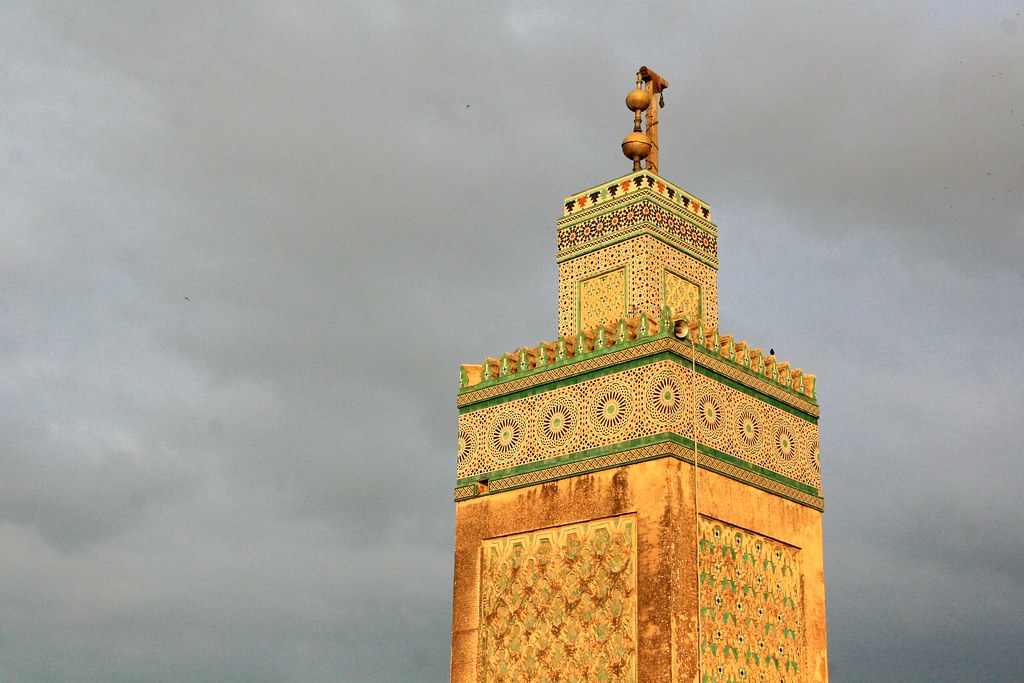 We made it to Fes and spent the afternoon and evening exploring some of the Medina. We climbed up to the top of a building to have dinner on a roof terrace - the view looked exactly like the sandy-coloured sprawl of rooftops in Aladdin! The Medina is amazing: tiny streets rammed with little shops and stalls selling EVERYTHING. It’s so fascinating, and it’s huge and still sort of follows the old medieval layout so you can wander around and get lost for hours in the most brilliant way, investigating tiny alleys and poking around different districts. It’s so busy and bustling with life, even just having tea in a cafe on the street is like a little adventure. 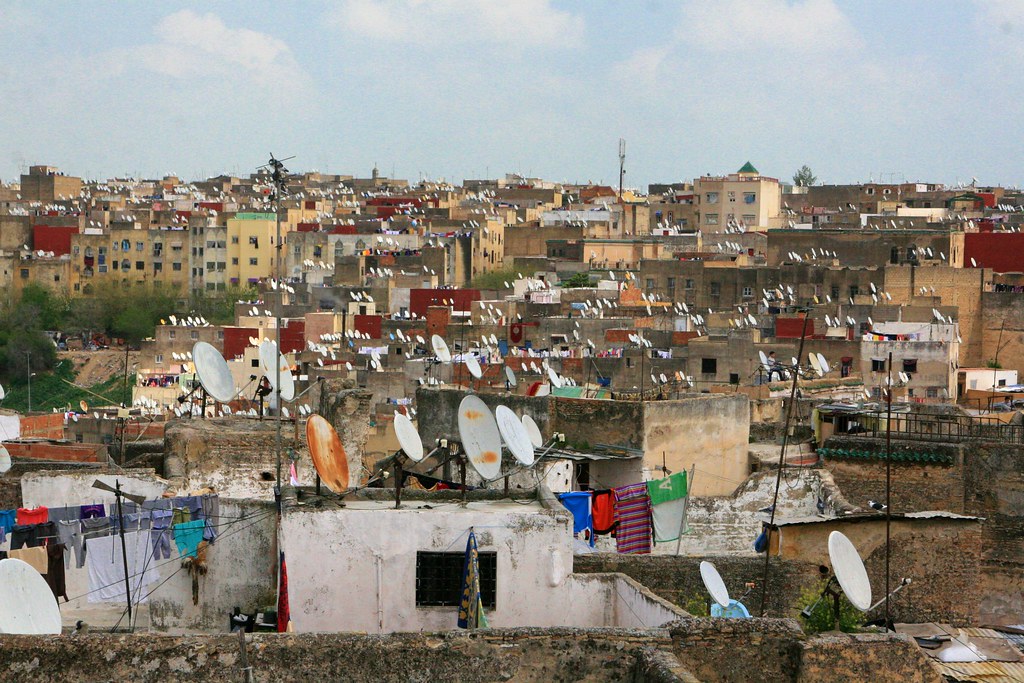 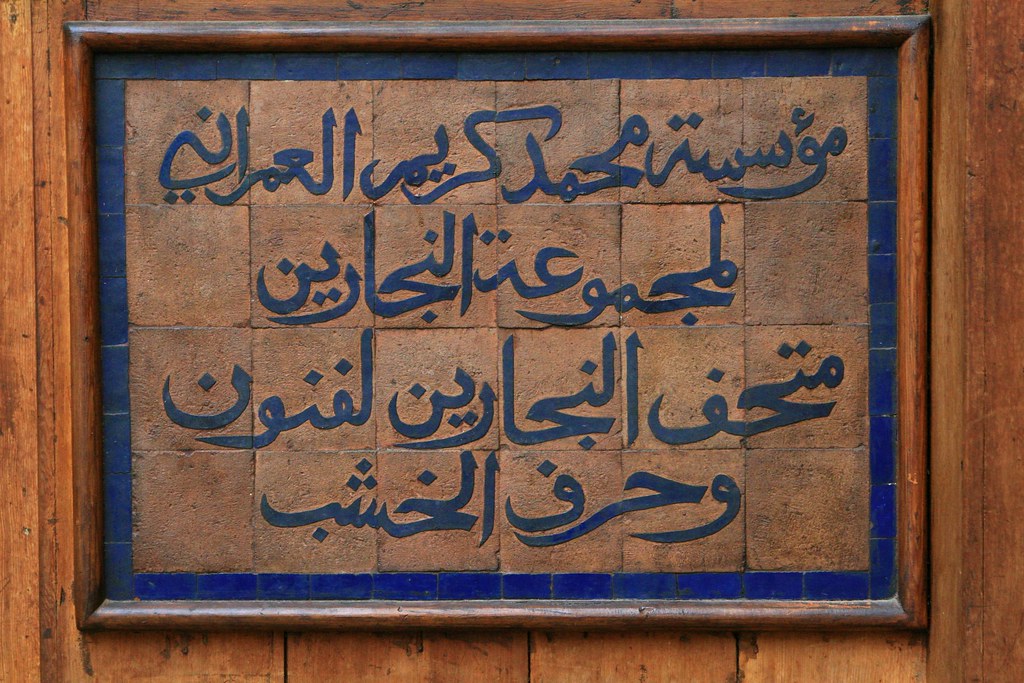 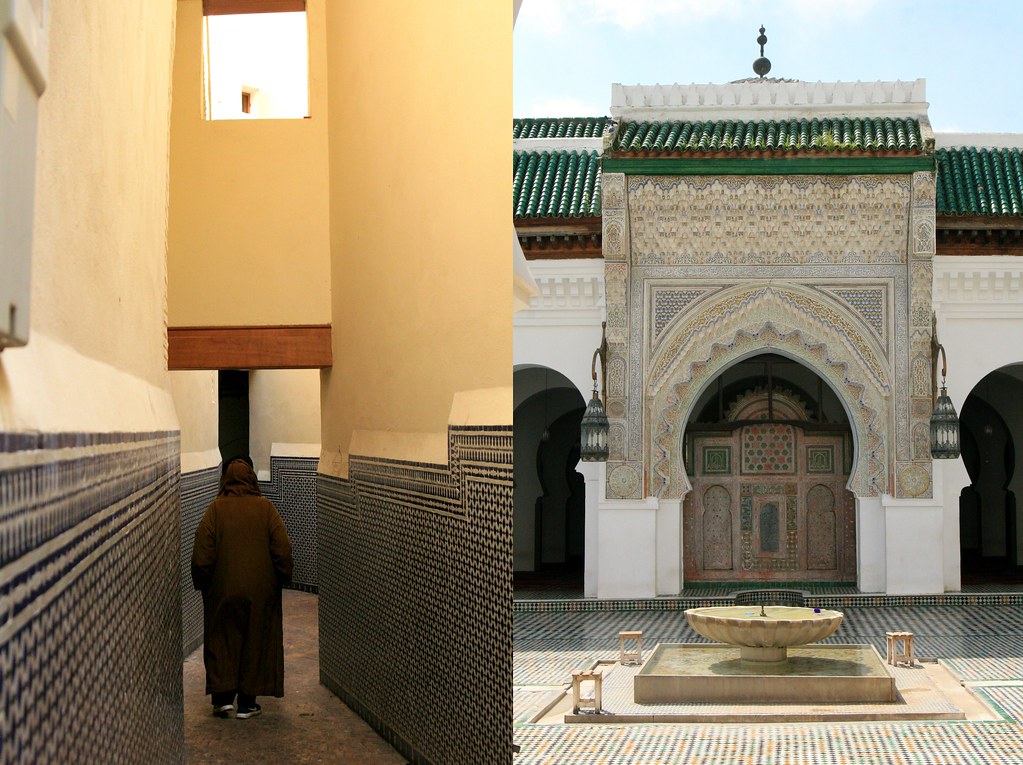 Trying to buy anything however, is an exercise in haggling. I have my own way of haggling. Which is a nice way to say I am not very good at it. When trying to buy little wooden coasters, priced at 5 dirhams apiece, I thought if I bought a bunch I might be able to get a better price. Working on the assumption that I might manage to get one small coaster for free (bargain!) I went to begin negotiations and pay. However, before I could ask, I was actually offered one small and one large coaster for free, plus a discount on one coaster that was more expensive, plus a free one for Liz. She wasn't even involved in the transaction, so quite how she ended up getting a present I don't know.

It all counts as haggling though, as I ended up paying less. 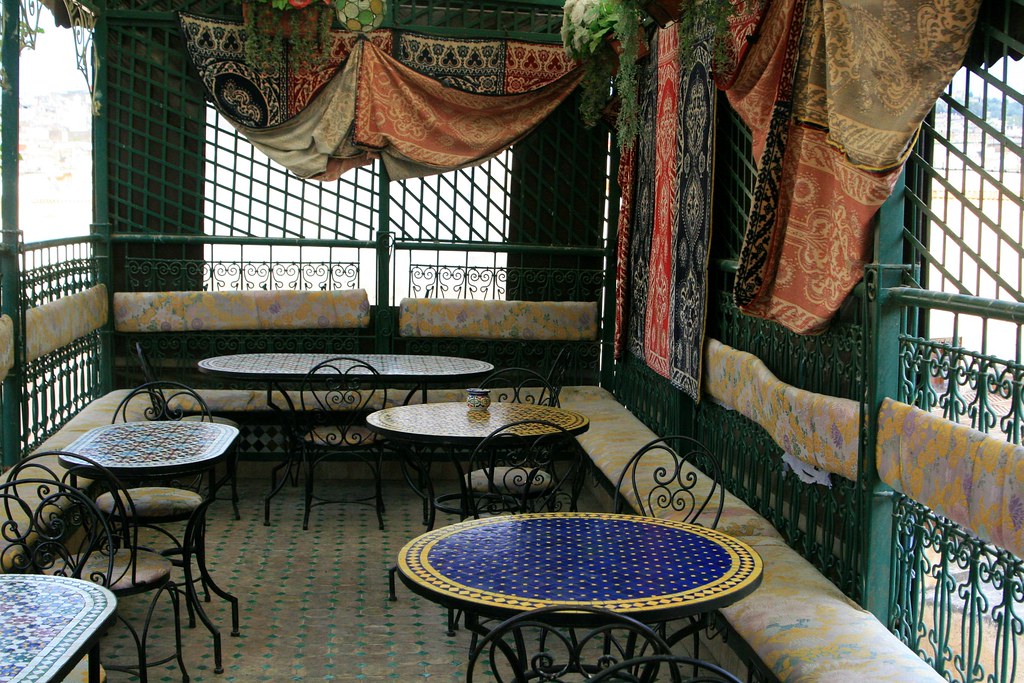 Later on in the evening, Liz and I were having mint tea outside, opposite a little pastry stall. During our time in Morocco, I had developed a little weakness for these amazing, sweet and nutty treats, and so I went to buy a selection for us to nibble. Unfortunately I failed to have quite enough change so was given one as a present (“un cadeau”). Returning to the stall later that night, armed with more change, I presented my 12 dirhams to the cheery proprietor for as many pastries as that would buy, as I had no idea what they actually cost. I was expecting maybe 4, but was given 6 - winning at haggling! Liz sniggered at my technique, but while I might offer comedy value, I still got a bargain in my opinion. 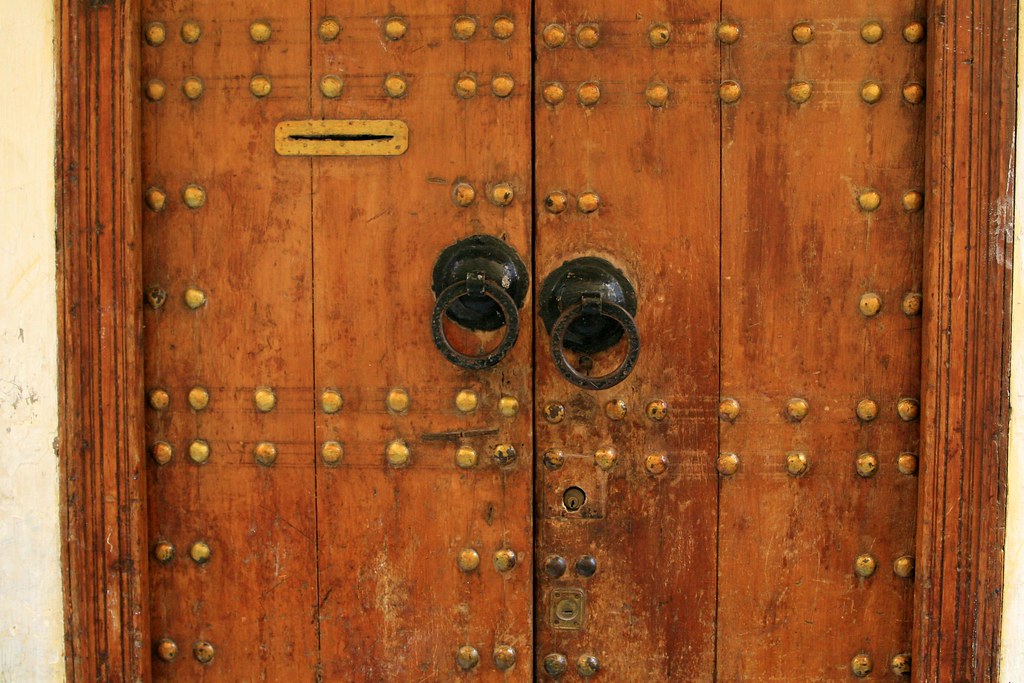 However, I did genuinely win at taxi haggling, winning a stand-up row in the street late at night, conducted in English, Arabic and French. I refused to pay 250 dirhams for a journey that had cost us 50 previously. The taxi drivers variously insisted they didn’t know where our hotel was, it was too far (how do you know if you don’t know where it is?), the price was normal, late night journeys cost more (they do, but it’s an extra 50% after 8:00pm and anyway, yesterday, the price was only 50 dirhams). Then a waiter in a nearby restaurant offered to come with us for directions; I flatly refused as I am NOT paying a waiter to ride around in a taxi with us. Armed with GPS and the arrogant determination of the worst kind of tourist, we eventually settled on 60 dirhams.

The taxi driver didn’t know where it was after all, but he made it to the vicinity and we just piled out of the cab to walk the rest of the way, which was probably quicker anyway. 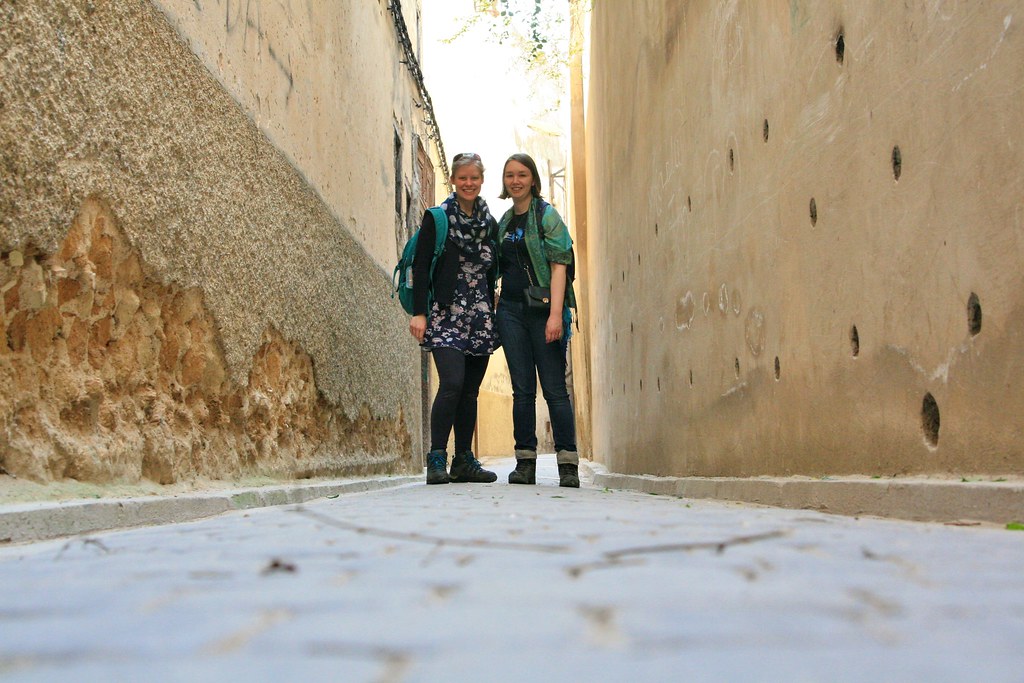 The next morning, we set off back into the beckoning folds of the Medina to spend the whole day exploring.  Fes Medina is not somewhere you navigate through. You just go, and recognise that you will eventually pop out again at some point. As a rough guide, going downhill means your going further in, but going uphill means your heading out.  But you might equally end up in a quiet, residential section of dead ends, as we did, with locals very keen to move us along back to the touristy bits where we belong. 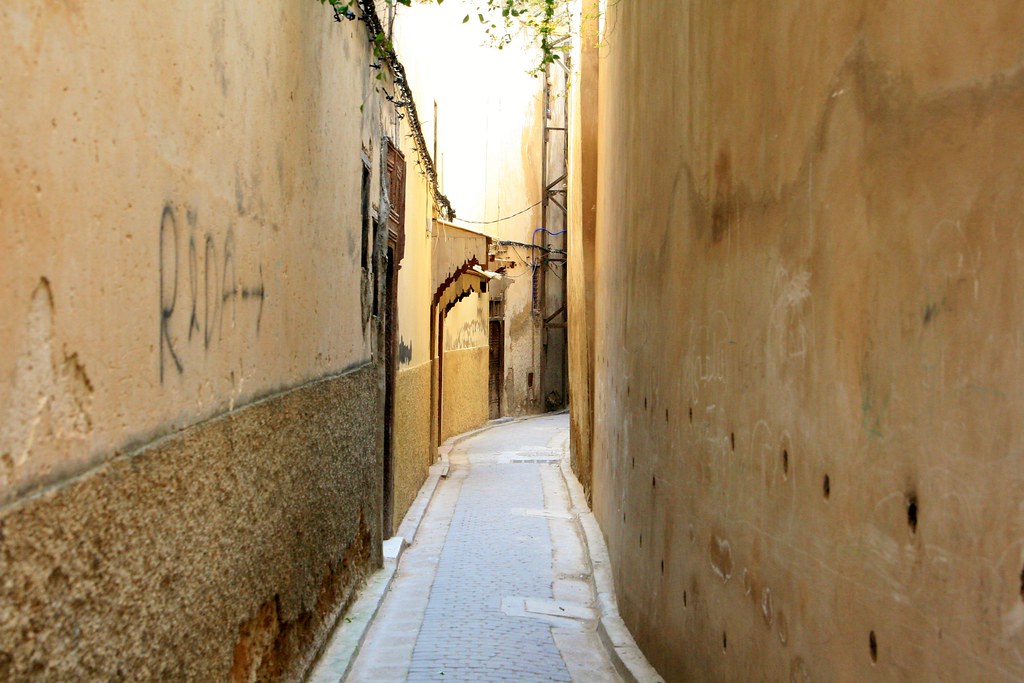 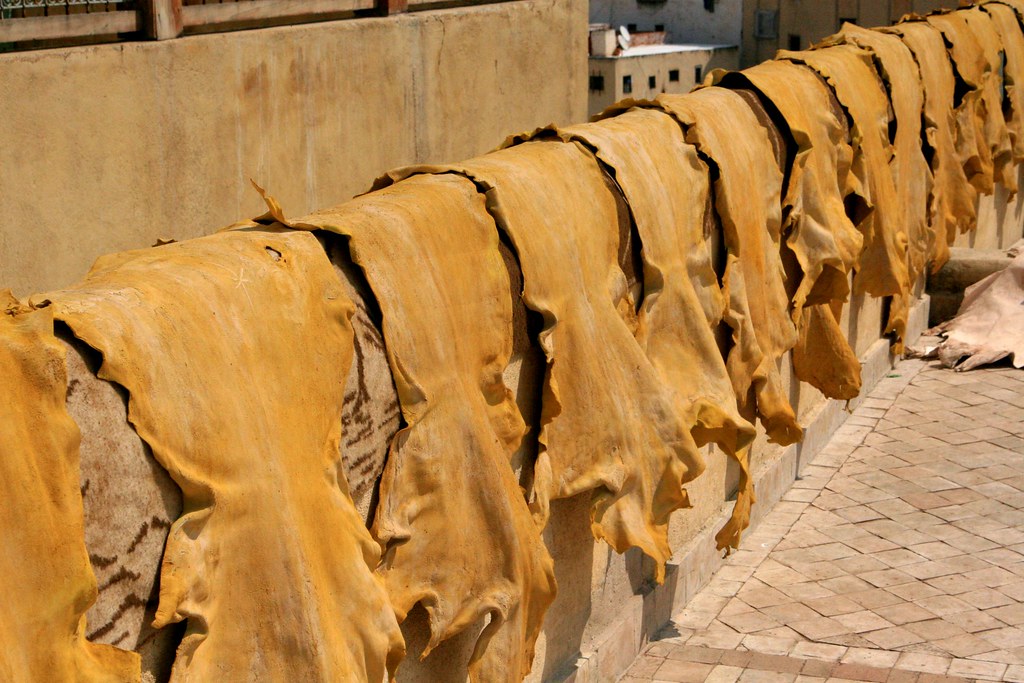 Each different section of the Medina is tumbled together, but they each have their own identity.  Silverware, wooden carvings, pottery, ironworks, silks... you name it, it's probably there in Fes. Equally, amid the noise of merchants calling out their wares, you might happen across a serene and peaceful mosque sequestered down an alleyway. 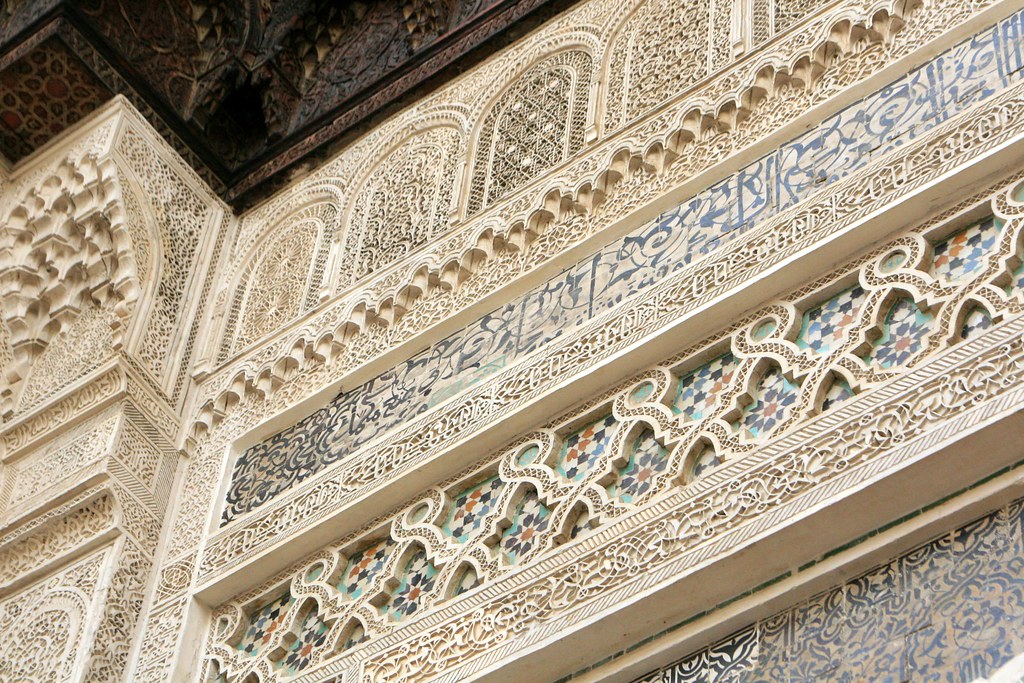 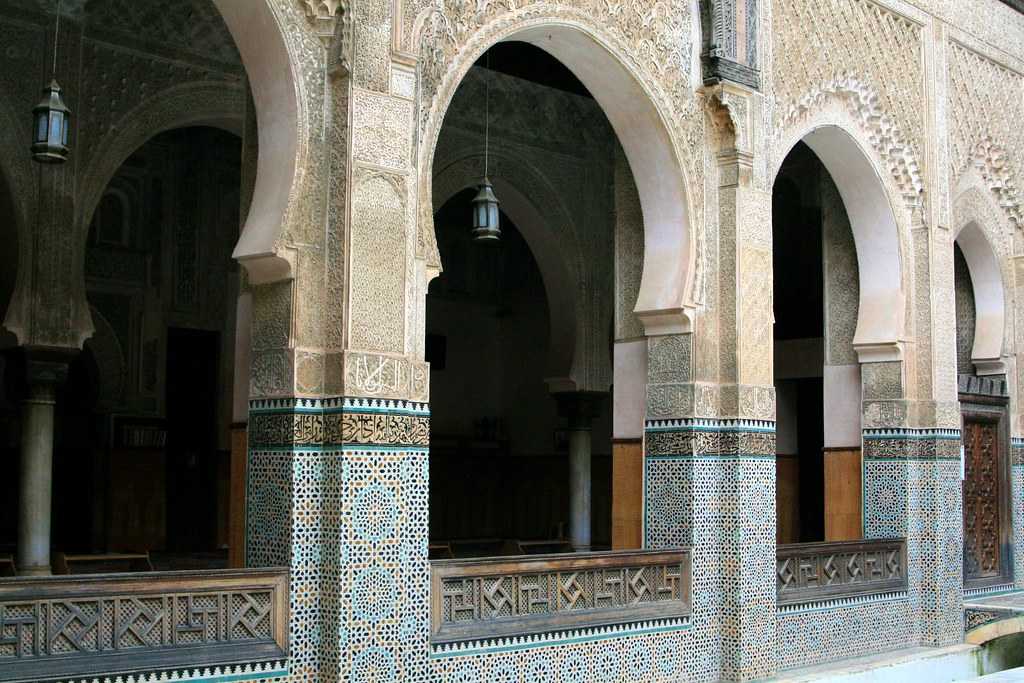 But the most famous of all the districts is the leather area.  A hotch-potch of buildings are clustered around huge, open dye pits that you don't know are there until you get up on the roof. The views are spectacular, geometric shapes spread out below in a patchwork of history, and workers toiled in the coloured pools under the sun. We could see the different processes that go into making the leather soft and pliable and brightly coloured.  The smell is reputed to be horrific, but while it's faintly unpleasant, the rumours were vastly exaggerated in our opinion. We were given little sprigs of mint to smell though, which was entertaining. 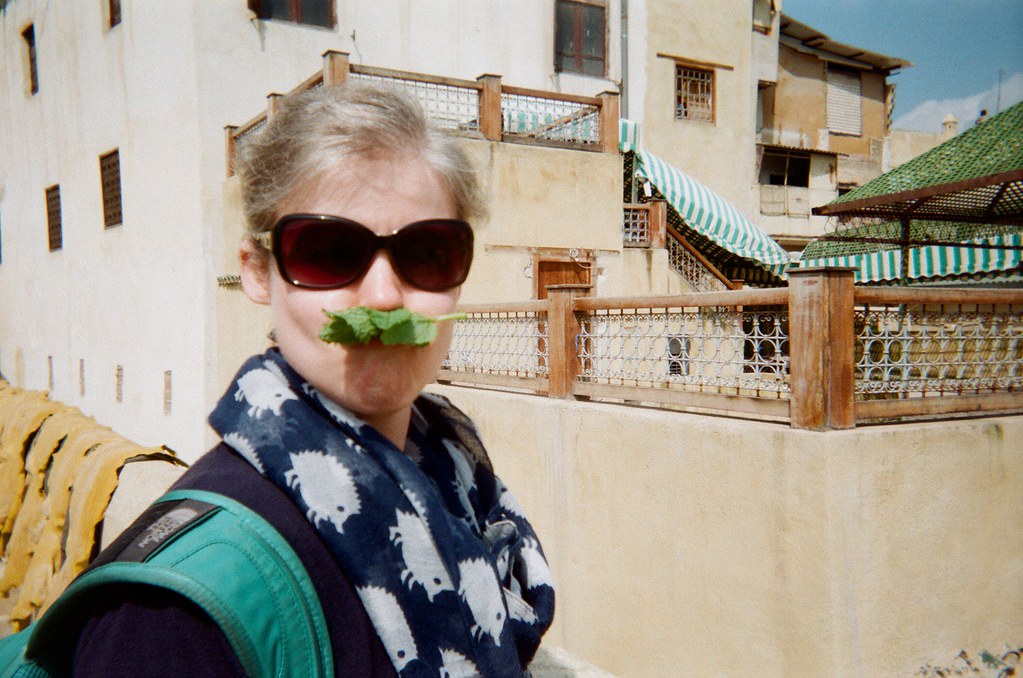 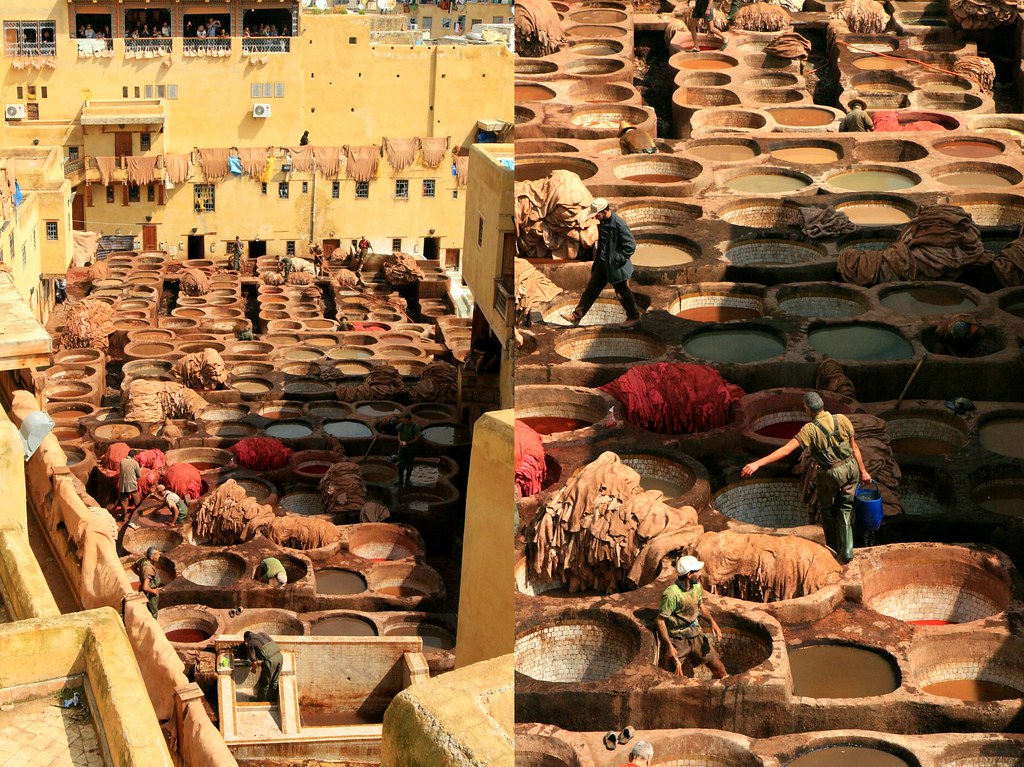 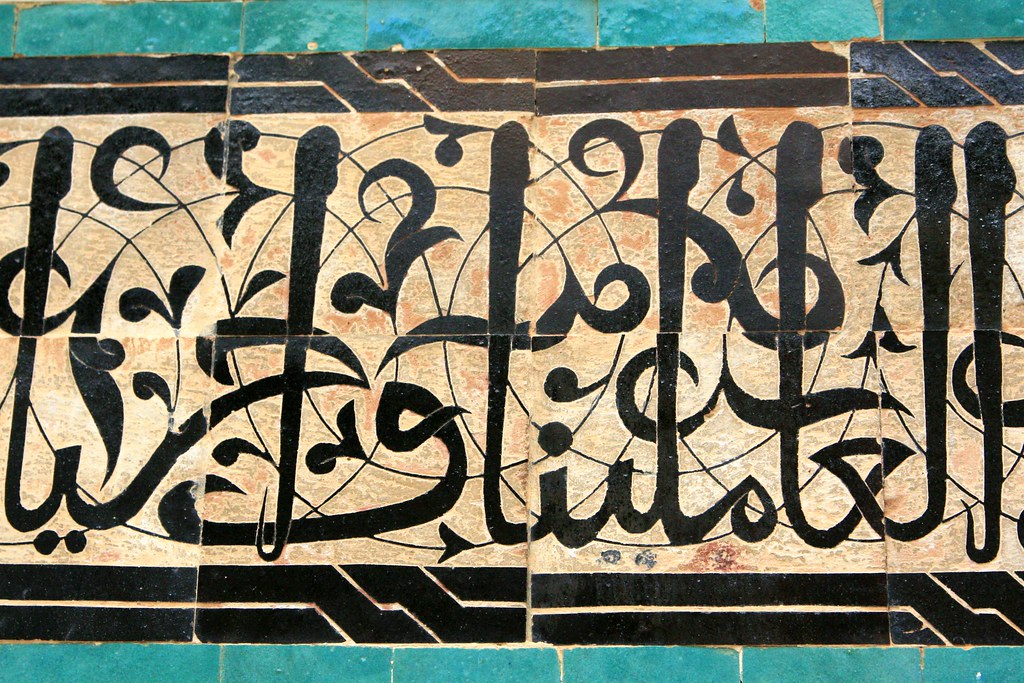 After a day cruising the Fes Medina, we stopped at a cafe near the blue gate to watch the world go by and have the now-ubiquitous mint tea. The little tables spilled into the alleyway and as the dark twinkled far above us, life exploded around us. Locals and tourists busied past, stall holders and traders caught up with one another, and there was drama in the form of a large hole in the floor, covered by a sheet of corrugated card with a stool perched on top. Every so often, someone would stumble on the edge of the crater, or walk into the stool, and once a chap came to throw some rubbish down the gap. It was fascinating! 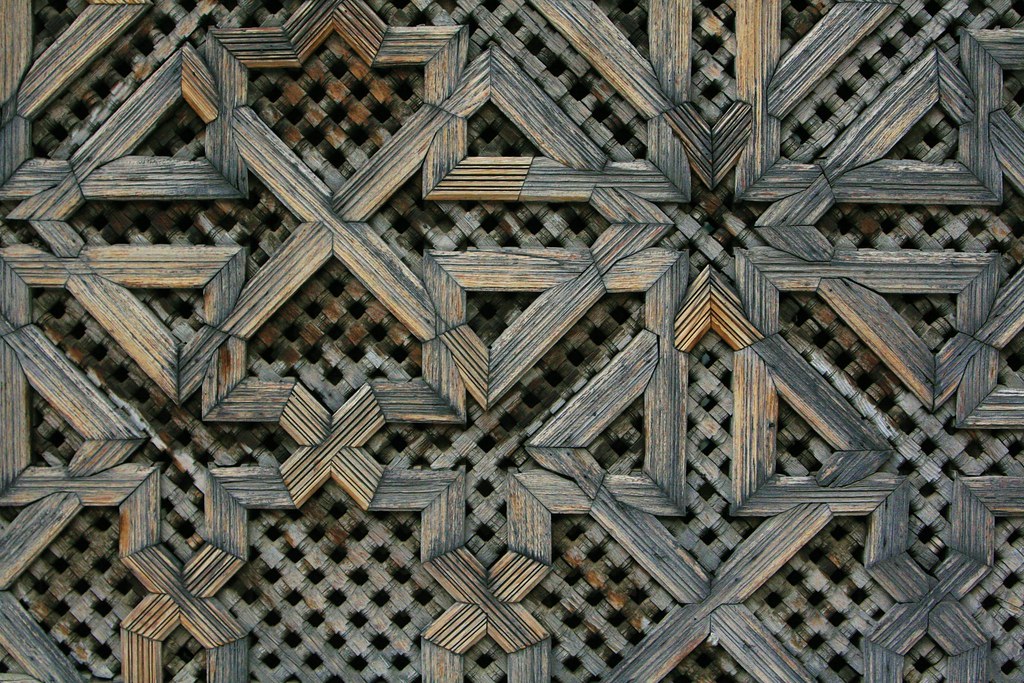 We also watched people buying an array of different breads from a small shop opposite: the warm tasty vegetable pastries we had enjoyed in Casablanca, the traditional round loaves, giant wheels of bread sliced like cakes...and huge circles of something that looked exactly like stomach lining. Tripe-tastic. Eventually, someone bought some and the proprietor ripped off a handful, rather than cutting or shaping it. It looked gross! So of course, Liz went to get some. She came back with a chunk and said that it was called Crepe Bebe. Baby crepe. Weird. And then she repeated it for me and I realised she was actually saying crepe Berber, which makes more sense. Berber crepe.

It turns out it’s not tripe at all. It’s basically the most enormous floppy crumpet you’ve ever seen.

I felt like an idiot. But it tasted great. I hope I get to return to Fes one day.