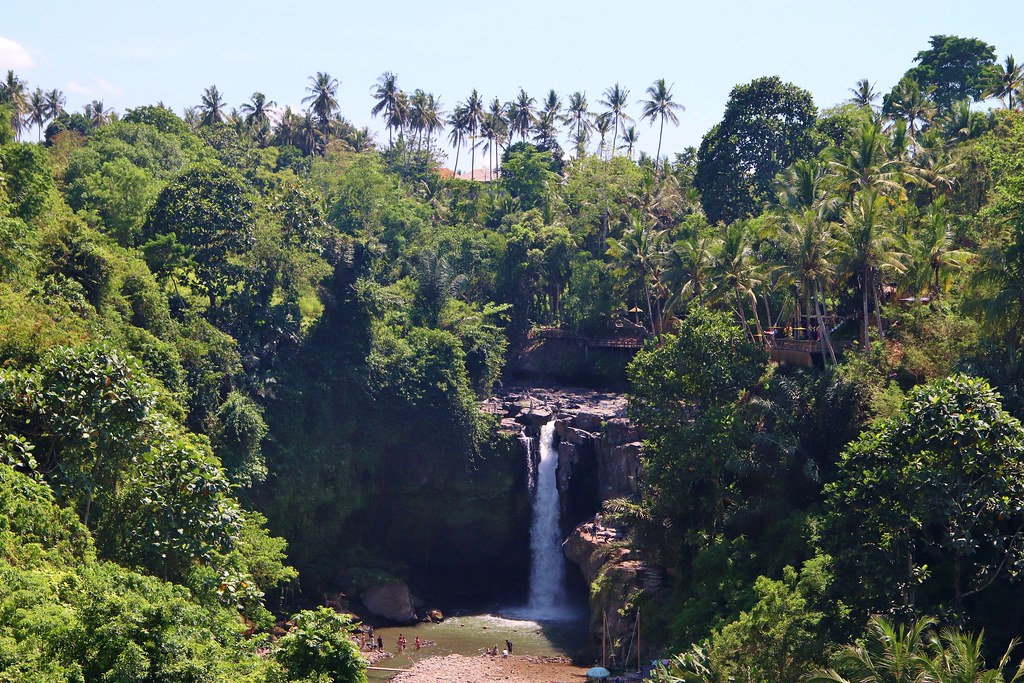 When Pete and I spent a couple of weeks travelling in Indonesia, we stayed just outside Ubud in a tiny little village with almost nothing there. However, we turned out to be within walking distance of Tegenungan waterfall which seemed to crop up on a lot of tourist tours and lists of 'Things to do in Bali'. We decided we may as well pay it a visit, and today I'm sharing a few of our pictures and stories of our visit. You can find more posts about Indonesia linked here: Indonesian Adventures. 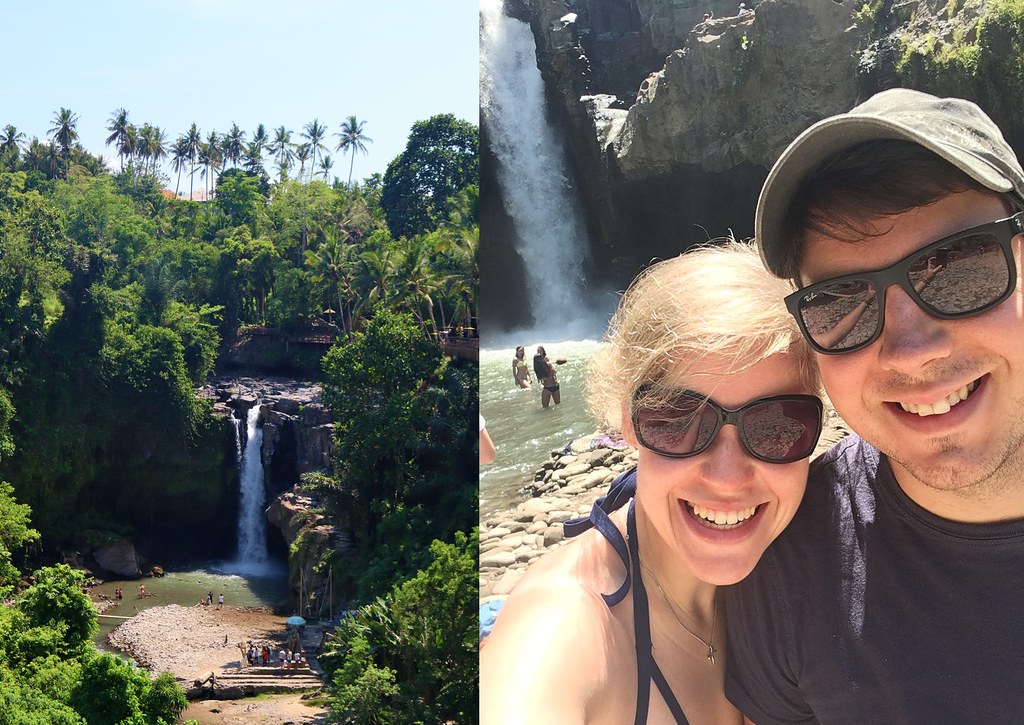 We got up a bit earlier - woah! Instead of lying abed for half the morning, we had ordered brekkie for 9:00am and so we had to get up and get sorted to be ready.

Munching on our usual - omelettes - we heard a familiar mewing at the window and our little cat popped back to say hello. She had somehow got up to the first floor ledge which wraps around the living room and so we let her in the window. She mewed constantly without let-up, purring and talking to us, before jumping into the kitchen counter and up again into the roof rafters.

We watched her do a circuit of the whole ceiling as we finished our breakfast, while I pondered how long it would be before she realised she couldn’t get down again and we had to perform a cat rescue mission. Although I needn’t have worried; she managed a hair raising slither and jump back down onto the kitchen cupboards and the floor without assistance. She seemed to have had a nice time hunting curiosities in the rafters; she had certainly been busy swiping her paws into the corners - after prey real or imagined we don’t know.

Fortunately she didn’t spot Terry who was skulking about the sink. 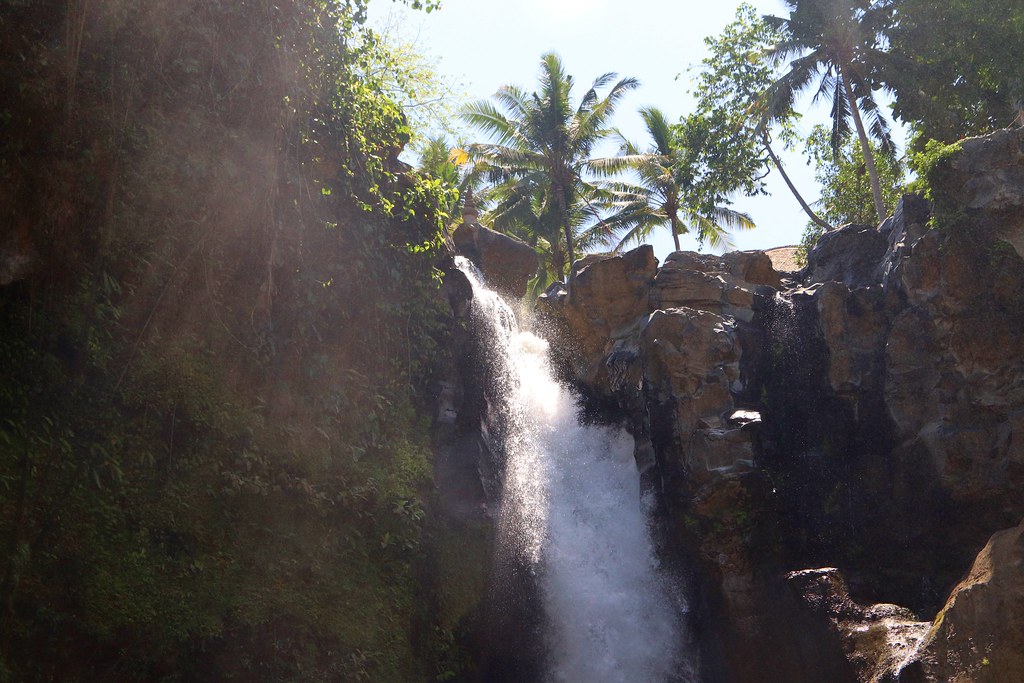 After breakfast, we kitted up and set off to walk to Tegenungan waterfall. It was another sweltering day and even the ten minute stroll to the falls was enough to make us hot and sticky.

The falls were surprisingly busy; the village we had been staying in had always seemed quiet and out of the way, but just down the road, the attraction of the waterfall drew stalls and traders, cafes and knick-knacks and lots of people. We paid our 300000 IDR entry fee (75p each, spendy) and started down the steps to the river.

Tacky signs were plastered everywhere, telling us not to worry and be sexy, telling us to stay cool and keep calm, telling us to roll with it and to love. However, when we caught our first view of the falls, they were really impressive. We stopped on a little platform jutting out over the valley and we could see the water splashing down: much taller and bigger than I had expected, fringed and framed with palms.

We continued to head down, passing a small temple and photo spots with props and frames, wings and hearts to get that must-have Bali insta shot. 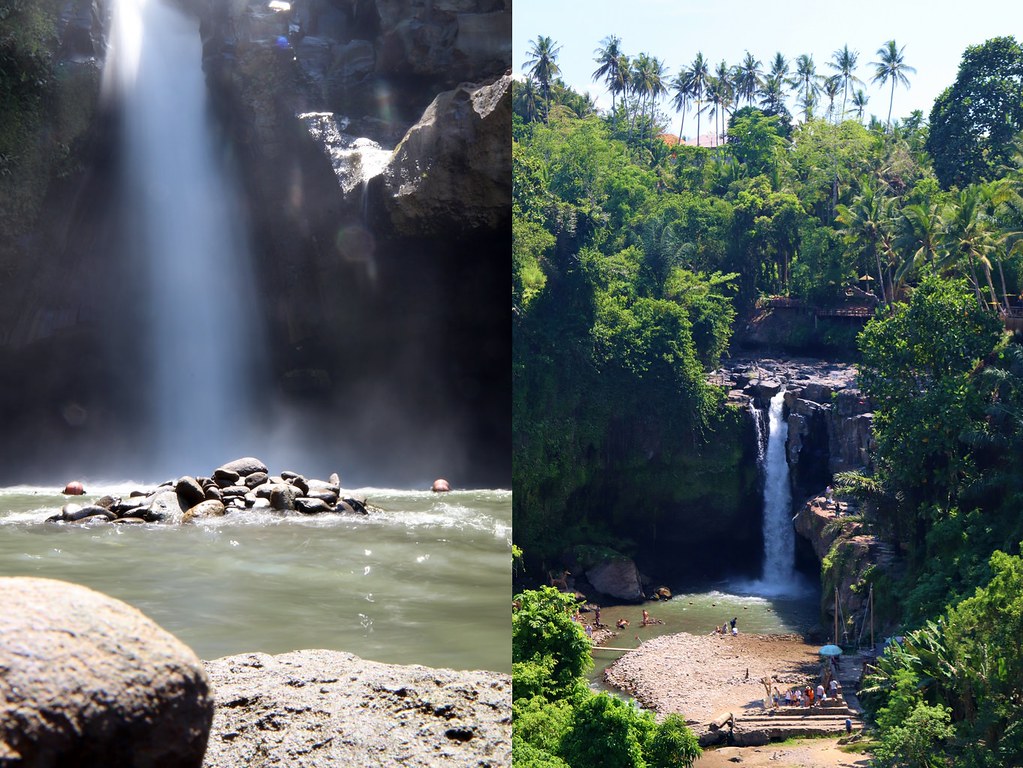 Getting down to the base of the falls, we picked our way across stones and the odd bamboo bridge over the water, and approached the pool. Spray hung in the air, misting from the force of the water. It was busy with lots of people enjoying the river, but despite that, the waterfall was impressive.

I snapped away with my camera, enjoying trying to make the water look smooth with long exposures, or trying to catch the sunlight filtering through the misty spray.

We tried to climb up to the top of the waterfall but it turned out you had to buy another ticket which seemed fairly ridiculous. So we headed back down again, slightly mystified, and took one last long look at Tegenungan. 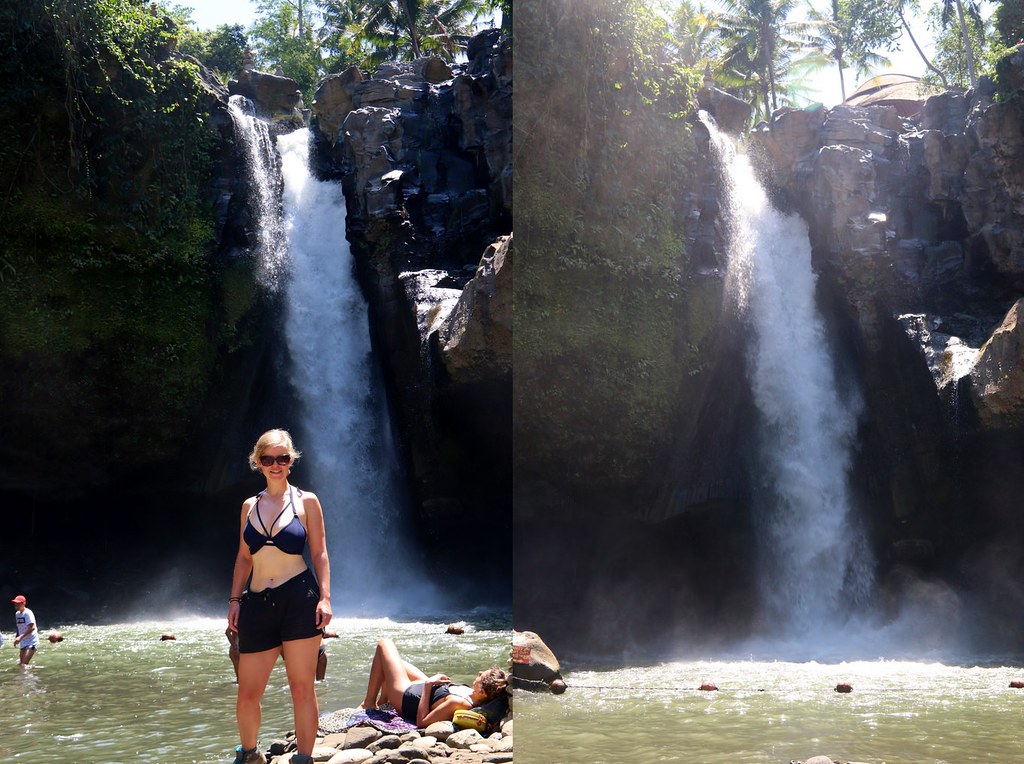 And then it was time to climb back up all the steps out of the valley (very sweaty work) and walk through the sun baked streets to our villa.

I was definitely in need of a shower.

With that accomplished, I went to order us a light lunch and managed to bring back our cat. Not only had she learned to show up for meals, she knew when we ordered food and just liked to come and chat to us in hopeful anticipation. It never worked (except sometimes on Pete because he’s a softie).

She did another circuit of the ceiling but when our food arrived, we had to put her outside. She doesn’t have very good manners at mealtimes. It took the two of us several attempts to get her to leave, but we managed it. So heartless.

P.S. You can read more about out exploits in Indonesia here where all the posts are linked: Indonesian Adventures
Posted by Miss Smith at 06:30