Indonesian Adventures: Our Villa in Ubud 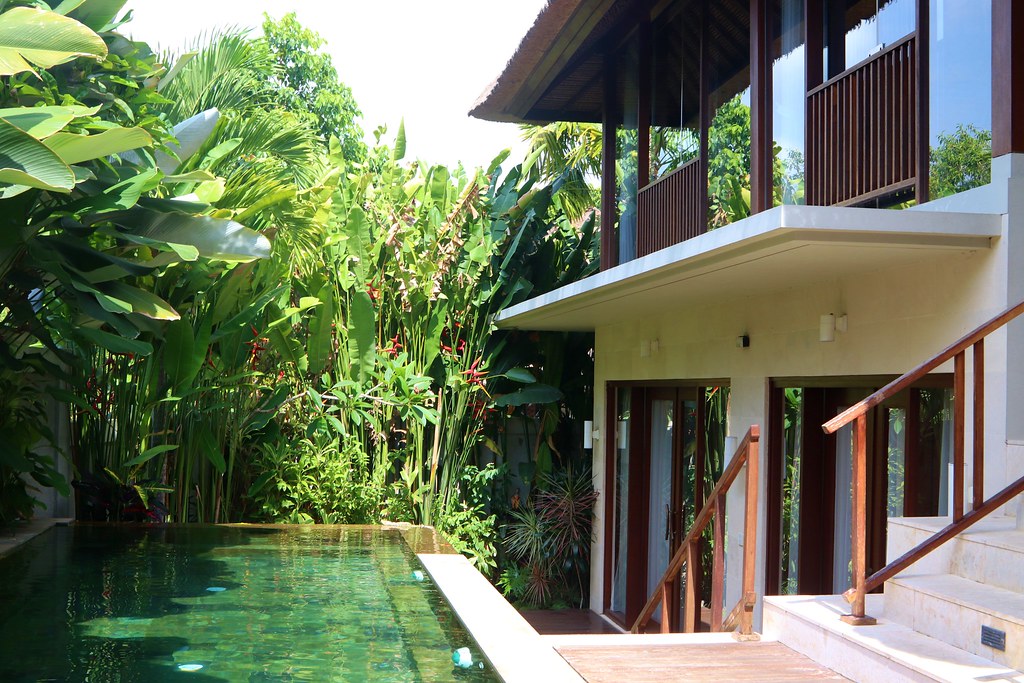 Back in October 2018, my partner Pete and I spent a couple of weeks exploring Indonesia. We had a pretty adventurous time, fitting in hiking, diving, jungle trekking and camping, but in and amongst all that we also wanted to treat ourselves to a little bit of luxury and take some time to relax. We decided to book ourselves a villa for a few days just outside Ubud on the island of Bali. We spent a great time there enjoying some quiet time and getting to know Ubud, and so today I'm going to be sharing a little bit about that experience.  If you want to read more about some of our more active moments, you can find all our Indonesian Adventures linked here.

*****
Our driver drove us cheerily along through a series of villages and on through more mountainous country. Lots of the space between the villages was carpeted with the lush green of rice fields, making the land appear very verdant. We also spotted regular shrines and temples and while we weren’t sure of the significance of them, many were decorated with fresh flowers and woven vine leaves.

Apart from a brief stop to pick up and fit a new headlight for the car, we made pretty good time it seemed. Our driver wasn’t sure where the villa was exactly but he said he would drive up and down the roads until he found it. Promising! Fortunately though, we passed a sign and soon pulled into the right place.

Our villa was one of six in a row under the same Airbnb listing and we were given the keys to number five. A very friendly lady checked us in, took our order for breakfast the next morning (not to be delivered until ten, hurrah!) and gave us a welcome drink in a coconut. As always with coconut, it looks great and tastes gross but I drank most of it anyway, trying to enjoy the novelty of slurping straight out of the husk.

Then we were shown to our villa and it really didn’t disappoint!

The lady showed us round but once she had left, we really got to explore. And it was brilliant!

In the planning stages, we had decided to treat ourselves to a bit of the villa lifestyle. Mainly because when I was knocking together a budget, I estimated about £60 a night for Bali, imagining it would be expensive due to tourism. But when we put that price bracket into Airbnb and saw what we could get, we decided to go full villa, rather than reduce our spending. Winning!

Upstairs was a huge open plan living room with a little kitchen. There were views all around over lush, green vegetation, rice fields in the distance and even a picturesque cow grazing off to one side.

Our lovely pool speaks for itself, with a little pagoda at one end with a small table and cushions, and a couple of sun loungers next to it. Downstairs was our bedroom with a massive bed bedecked with flowers and towels folded into the shape of bunnies.

Actually, come to think of it, everything was bedecked with flowers.

Finally the bathroom - which was once again outside - was gorgeous with a rainfall shower at one end and a massive 2-person bath at the other.

It was hard to know where to hang out first!

But of course the pool won. It was so lovely to have a swim and have the place to ourselves; a total luxury. 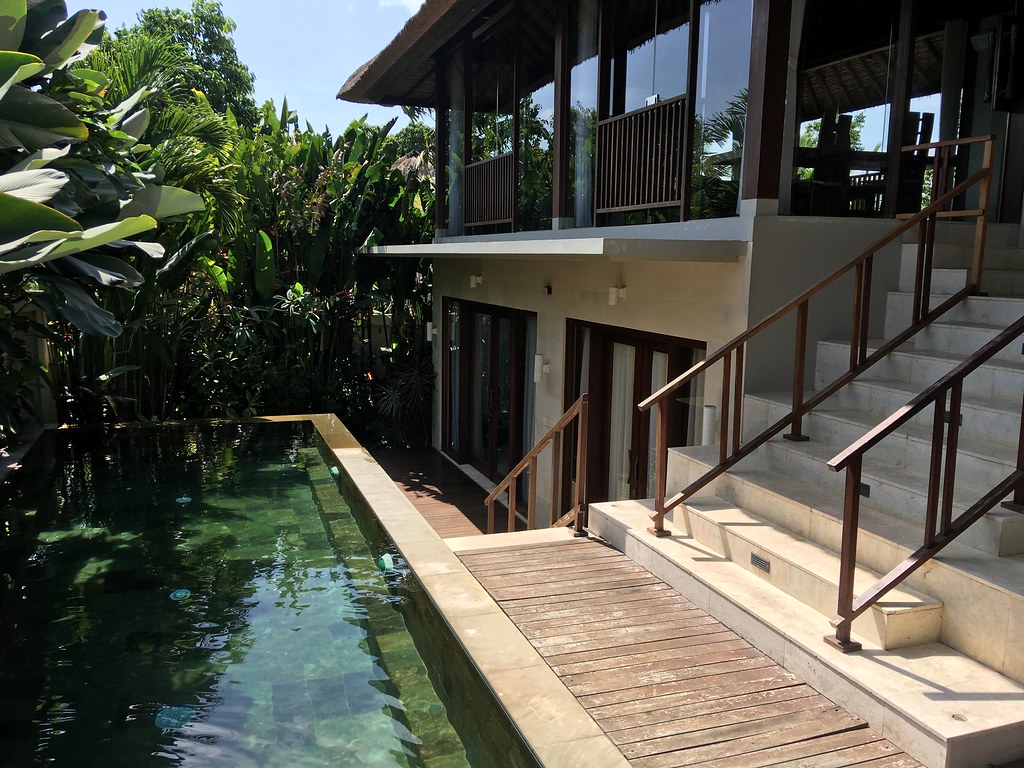 I was pretty keen to test out the giant bath which was under cover but open to the air. I ran myself a warm bath and sat for over an hour reading and indulging in lovely bubbles. It was incredibly relaxing.

Pete eventually came to seek me out; he was hungry so we tracked down the take out menu we had been given and chose pasta (me) and chicken katsu (him). The food was delivered after about 30 minutes and we took it outside to sit under our little pagoda and dine outside. With the delivery chap also arrived a very persistent cat; a slender little creature who looked underfed but had an enormous meow. We managed to shut her outside our garden but within minutes she appeared inside anyway, clearly fully aware that we had just taken delivery of our food.

Pete’s a soft touch so he shared his chicken with her which she eventually agreed to eat. I did not share my pasta as I am cold and hard-hearted.

After dinner, I sipped on a banana daiquiri which I had ordered with dinner. It arrived amusingly in a plastic cup with the lid taped down, but I poured it into a wine glass and it made a very satisfying dessert, as noisy frogs chirruped and croaked in the bushes. 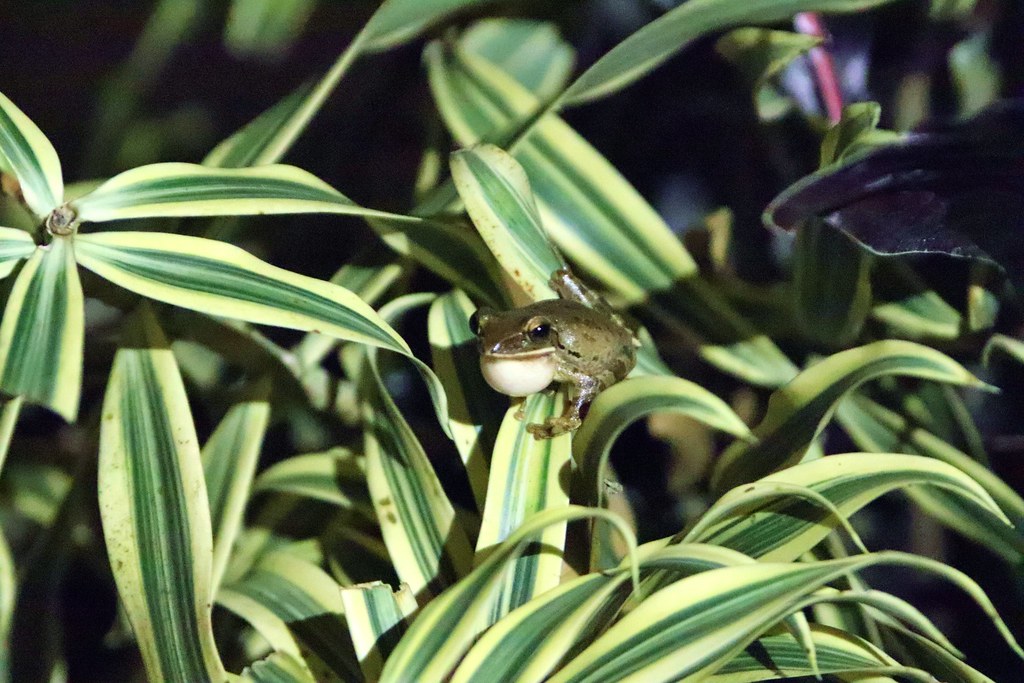 It wasn’t particularly late but we were both tired from our early start - we'd been up since 4:30am to go diving. We just about limped through half an hour of Netflix before turning in at 9:30, firm in the knowledge that we finally had a good night’s sleep ahead and that we wouldn’t be disturbed for anything until breakfast.

Which we had ensured wouldn’t be delivered until 10:00am.

We very much decided to give the next day over to relaxing and make the most of our villa. With that in mind, we slept in until 9:30 and then I threw on swimwear and a sundress before heading upstairs to our living room.

Breakfast was delivered in good time and was very tasty. I slurped down a fresh pineapple juice, a fruit platter, an omelette and some toast and was pretty satisfied.

Then it was on to some hard core sofa time: I spent the morning combining reading, writing my journal and browsing the internet for Bali-based inspiration, enjoying a couple of cups of tea along the way, while Pete similarly amused himself.

After a couple of hours, I needed a change of pace, so moved to one of the sun loungers in the sun-dappled shade as leafy ferns waved around me and the pool fountain trickled prettily. I had a quick swim after that and then went back to reading as the villa staff came to clean and primp our little home. 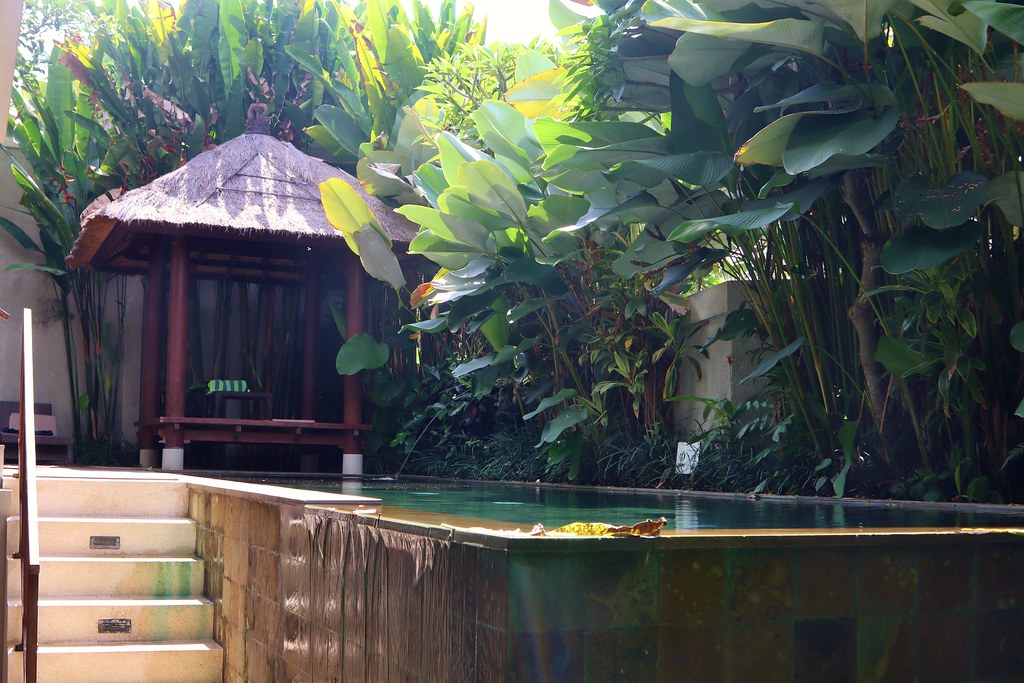 So it was a challenging morning all told, and therefore lunch was well earned. We had it delivered and I munched on some tasty gyoza and some fries which hit the spot and I also ordered a cheeky Mai Tai to go in the fridge for the afternoon.

The afternoon followed a similar pattern: I did some more travel journal, read a little more of my book by the pool and then joined Pete in the pool for a swim and a natter.

We had planned to go into Ubud for the evening so we showered and changed and finally left our little slice of paradise at 6:00pm, taking a car into the centre of Ubud which was about 30 minutes away.

It was getting dusky, and was virtually dark by the time we arrived. But Ubud proved to be a lovely little town full of curiosities and a large enough tourist trade for lots of things to be open for the evening. We strolled through the warm evening air admiring the shops and restaurants. There’s an Indonesian air about the place as mopeds speed about in all directions, and the little stores and restaurants tend to be leafy, vine-covered and open to the air.

But it is also noticeably western, with plenty of tourists about and a lot of English signage, and most of the restaurants seemed to be offering up that stereotypical Ubud fare of vegan food that will cleanse your soul.

If it sounds like I was turned off by that, I wasn’t. I mention it simply to note the contrast.

So we ambled down a few streets and opted for a restaurant called Kismet as it hit my two preferred criteria of having a good number of diners and an open air place to sit.

It turned out to be entirely vegetarian too, and easily the most expensive meal we’d had so far, but it was also incredibly lovely. The table was laid beautifully and we were given little dry tablets which we dropped into water only to find that they absorbed it and turned into little lemon scented towels. This novelty amused me no end.

We split a portion of samosas with mint sauce, which were OK and I ordered a mango margarita which was extremely tasty and refreshing, full of pulped mango and with a tasty salted rim.

I opted for a spicy pulled jackfruit burger for my main, which came in a black, charcoal bread bun - no idea what that means but it tasted good - and it was absolutely delicious. Pete had never had jackfruit before and it is weirdly meaty. Meaty for a fruit anyway, and it took on the spiced flavoured in the way that pulled chicken might. The burger was also full of salad and came with a side salad and fries. Happy days. Given the lack of meat, Pete opted for a ‘No Fricken Chicken’ wrap which contained pretend chicken which he really enjoyed, while being mystified by what it actually was.

We treated ourselves to a dessert too, and I enjoyed a tasty chocolate dome filled with mousse. Yum.

After that we wandered back through Ubud, hunting down a taxi to take us home.

P.S. You can find some of our other stories from Indonesia linked here: Indonesian Adventures.