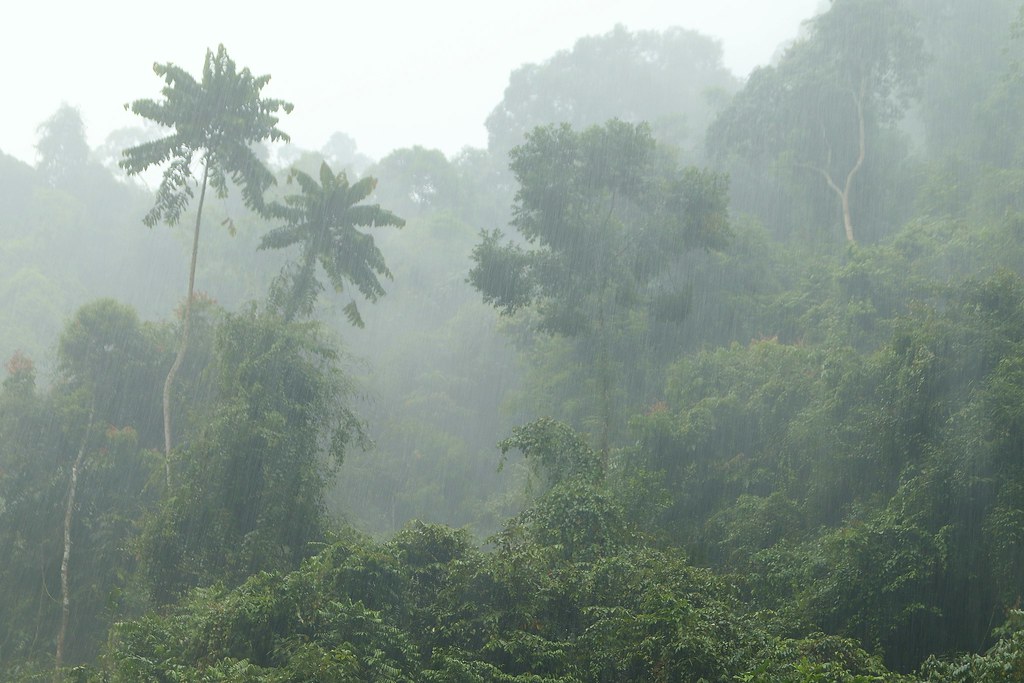 Today's post goes back to a 2 day trek that my partner Pete and I took in the jungle of northern Sumatra. It had rained solidly overnight and our only choice to return to the local village was to take a raft on the river. Sweet! There aren't many pictures to go with this story, simply because you need both hands to cling to a raft and my camera isn't waterproof, but I've included the one or two I did take. If you want to read more about our jungle trek, or the rest of our Indonesian Adventures, they're all linked here: Indonesian Adventures

We slept for about 11 hours all told. And while I had quite weird dreams, I slept pretty well, enjoying being curled up in the fresh air, with only a sleeping bag liner necessary to stay warm. It wasn’t until almost nine that anyone was really up, which wasn’t that surprising given the continued pounding of the rain.

We got dressed and our guide appeared with breakfast, announcing that we couldn’t trek today as the weather made the paths pretty much impassable (which we could well believe given the torrents of water which had been paths yesterday). However, he reckoned we could enjoy a bit of breakfast, relax and then head back to the village around lunchtime.

Breakfast arrived in the form of biscuits and another, very welcome, jug of tea. We were half way down this before a fruit platter appeared for us both, consisting of several passionfruit, a couple of bananas, pineapple, watermelon and a mandarin. Each.

So we tucked in. Part way through, Pete paused to wonder if this was our whole breakfast or if there was more forthcoming. And sure enough, in addition to this mountain of fruit, we were shortly presented with a triple decker toasted sandwich each, with an omelette in the bottom, salad in the middle and cheese in the top.

Just as we were polishing off the last few remnants, our guide reappeared to say that the water level was rising and that we should probably head out now rather than waiting until lunch. So we dressed in our swim things, made a last trek to the loo and got soaked and then packed up all our things. I slung a t-shirt on over my bikini and the Guides then wrapped our bags and shoes in plastic and went off to scope out the rafts.

We watched from our hut as they lashed together three rubber rings, tied our stuff to them and topped the whole thing off with a roll mat. Then we were beckoned over to join the fray. 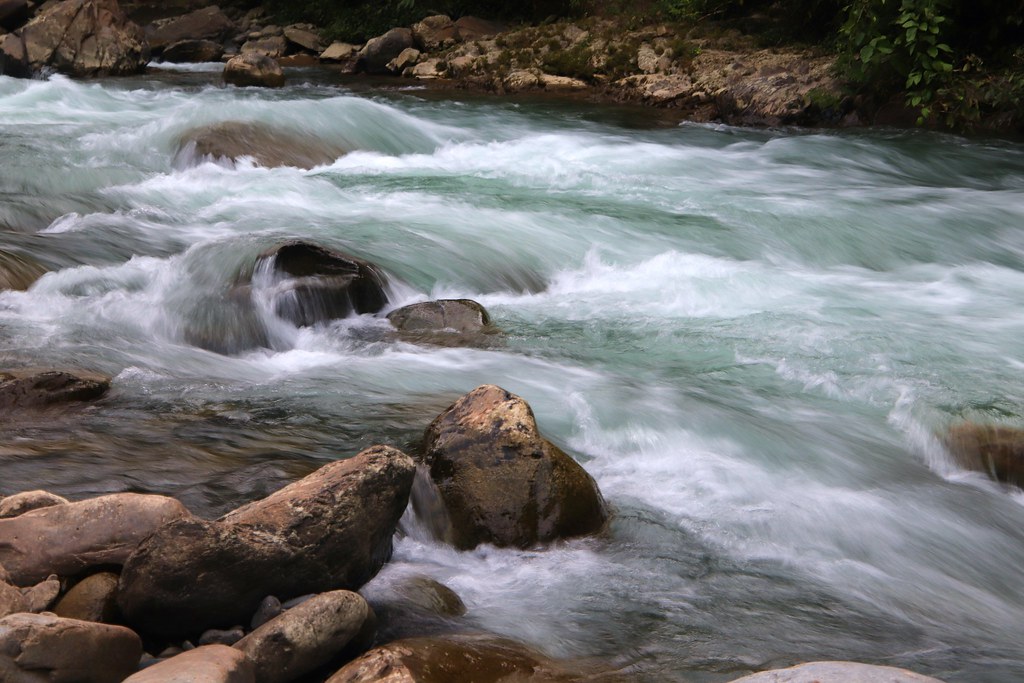 Sliding over the slick stones along the river bank, we clambered into the middle ring of this little vessel, the river crashing along, swollen with water from the overnight onslaught. Then one guide sat in the back ring, another sat in the front ring, they strapped our flip-flops to the little craft, and off we went!

Rafting turned out to be an optimistic term for holding on to the rubber rings and having the two guides fend off the rocks with long sticks. The rain continued to lash down at us and we were drenched from above and below as waves and rapids rocked our little boat and crashed over us.

And it was BRILLIANT! I laughed out loud for the sheer joy of it and we went whisking over the river, almost but never quite smashing into the rocks.

The jungle loomed over us, misty and mysterious, shrouded in rain and we shook the water repeatedly from our eyes in this absurd and exciting adventure. It was wonderful and exhilarating, and we shrieked and whooped whenever a new wave unexpectedly lurched the rubber rings and set water crashing over us. The guides were clearly expert, always knowing just how to ping us off a rock, or wedge the raft around into the rapids.

And despite its hotch-potch appearance, the little craft held together and held all of our things and we made it, drenched and giggling back to the village. We hauled ourselves out of the river and huddled under a nearby cafe. The guides unwrapped the luggage and found our boots...and the bags of two other people.

We just laughed; after all, our bags would come floating down the river after us sometime later with the next group. 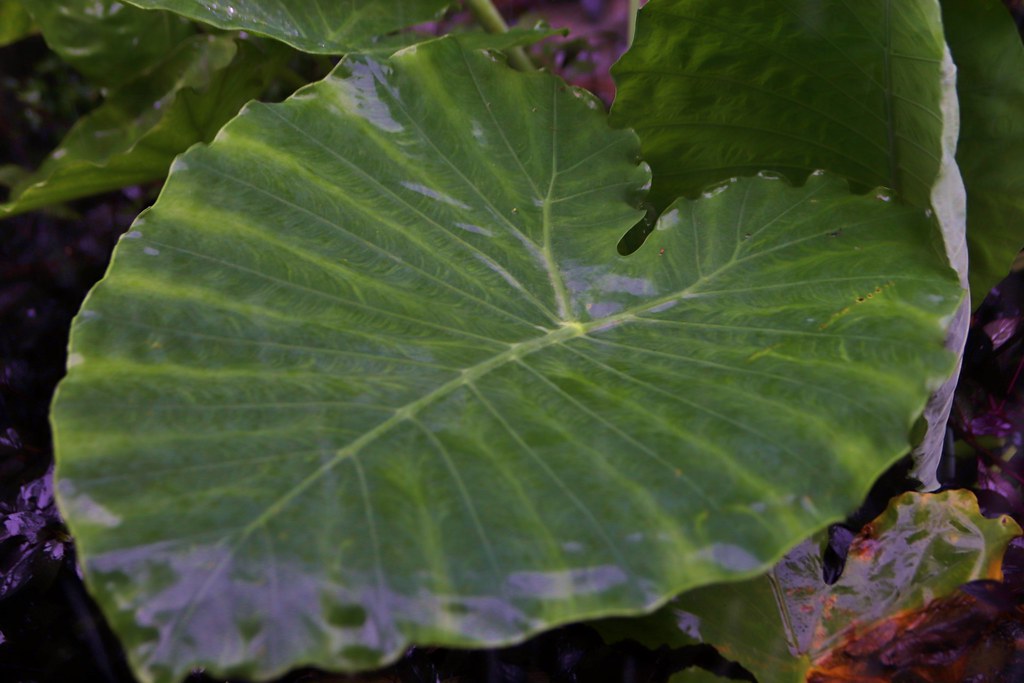 So there was nothing for it but to stumble back to the lodge, under a kindly loaned umbrella that was too little too late, dripping apologetically at the front desk with literally nothing but the swimwear we were standing up in. Plus the flip flops and a borrowed umbrella.

Fortunately we were able to access our stored bags and they gave us a room. I had a cold shower, felt much cleaner, and more importantly, drier than I had in a while and we spent a very pleasant morning sitting on the verandah outside our room reading and watching the rain.

Our bags turned up in due course (hurrah) and I was able to sort out my things. We had an even better room this time: a double bed perched on a raised platform with a mosquito net canopy. And once again, an open air bathroom, this time featuring an entire garden.

After a while, the rain finally eased and lunch beckoned and we had a light meal, more tea and watched monkeys gambolling about in the bamboo. They had a real very-busy-doing-nothing vibe going on and we marvelled at their agility in hopping from tree to tree.

The afternoon also proved relaxing, full of reading time and travel journal time, interrupted only by the occasional thump of a monkey on the roof.

The daylight gave way to darkness in the very sudden way it does here, and we released the netting around our bed and wandered back to the restaurant for dinner. We had ordered a chicken rendang for two for dinner, which had to be requested at least 3 hours in advance so we were looking forward to trying some Indonesian fare. It proved delicious, with the chicken being cooked along with potatoes in a dark, rich, slightly bitter sauce with a deep, intense flavour, a bit of heat and lots of deliciousness. We had it with rice and despite the large platter we we served, we polished it off effectively! I washed mine down with a local drink which the menu claimed was made of ginger, lemongrass and brown sugar. When it arrived, it turned out to be hot and incredibly sweet but with a real hit of ginger. In fact, there were big chunks of fresh ginger in the glass and it was very warming; a bit like drinking toffee or Jamaican ginger cake, but with more burn.

After dinner we headed back to our room and chilled out before an early night. Because our cab was coming to take us to be airport at 2:00am...

P.S. You can find more of our Indonesian Adventures linked here.
Posted by Miss Smith at 06:30