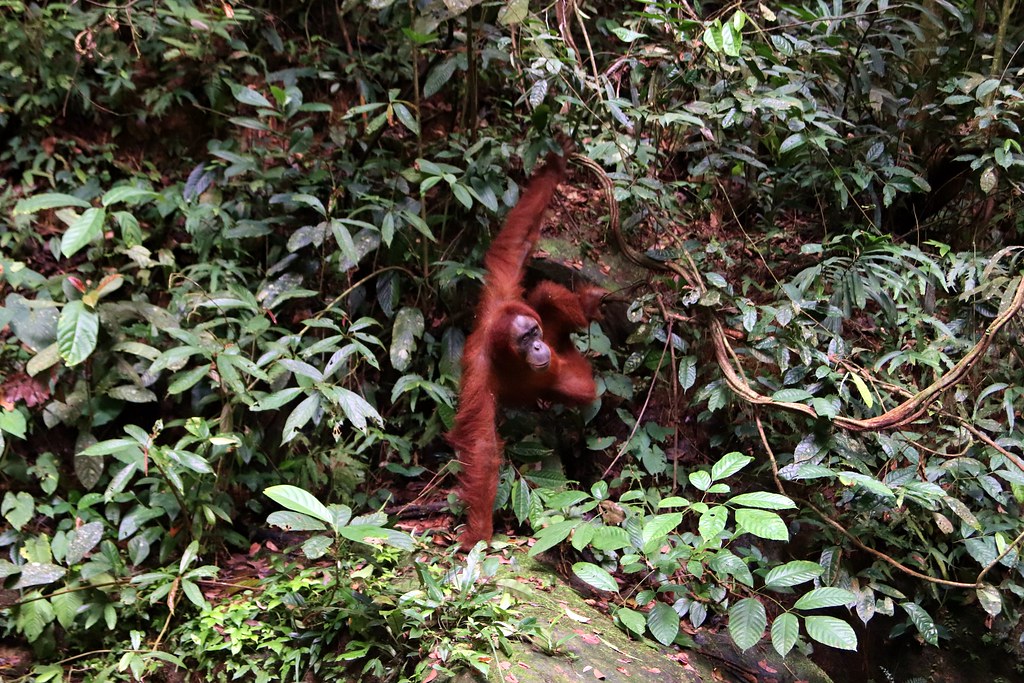 One thing we were really excited to do in Indonesia was a bit of jungle trekking; the chance to experience the tropical forest terrain was incredibly appealing, and we booked a 2 day trek with Trek Sumatra, along with an overnight camp. And I would massively recommend them, by the way, as we had a great experience, a very helpful and knowledgeable Guide (and fab food!). This is the story of our first day trekking, and you can find more of our Indonesian Adventures linked here: The Full Indonesian Adventures

We had a pretty chilled out morning when trekking day rolled around. Time to get up and shower (cold!) and pack up our luggage for storing and our day bags with the things we would need overnight.

We headed back over to the bamboo lodge and settled in for breakfast: delicious noodles (my faves so far - top work Indonesia!) and a fried egg, prawn crackers, some pineapple and a passion fruit juice. We practically needed a rest afterwards to digest, but instead we loaded up on water, met our guide and sauntered off into the jungle.

I say sauntered off, but actually we started climbing the hill behind the lodge. The temperature was in the thirties and the humidity was intense thanks to the rainy season, all of which conspired to drench us in sweat immediately. Wowsers. We’d both gone for long trousers to keep bitey things at bay but fortunately I’d gone with a vest top. However, it was soon damp from our exertions as we marched along behind our guide.

We crested the hill and walked through a rubber tree plantation; we could see where the trees were being tapped and apparently a tree can keep yielding its sap for about 25 years if you cut it right and look after it properly.

We had just under an hour’s walk to the national parkland where our trekking would mainly take place. Residents include bugs (obvs), little monkeys, monitor lizards, orangutans (our guide seemed to think we might even see them but we were aiming not to get our hopes up) and even tigers. They are virtually never spotted (because they’re striped - BOOM!) there being only a few hundred Sumatran tigers left in the wild. But apparently one raids the local village and steals a cow every so often, so they are certainly about.

We made it to the park: a protected area where you’re not allowed to farm or take things, with a boundary marked only by an inconspicuous slight clearing. We promptly plopped down for a brief rest. Phew! We took to giving face status updates to monitor our horrifying sweat levels. Streaming seemed to be the word for it. 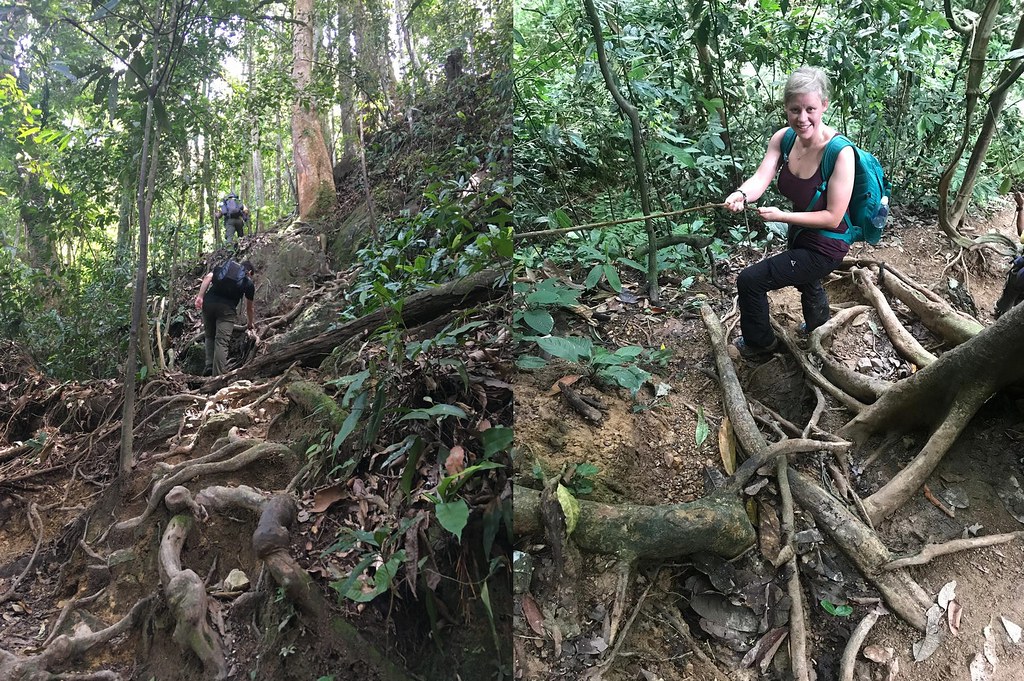 And then we set off walking again. The terrain was absolutely fascinating: I can only describe it as the most proper-looking jungly jungle you can imagine. Jurassic Park could happen here, Indiana Jones is probably knocking about too, and it made for incredibly exciting and satisfying trekking.

Trees rose high into a canopy above us and we were always in a green half-light shielded from the direct sun which dappled through from time to time. The roots mapped the jungle floor out beneath our feet: always at the surface, tangling together, protruding and twirling together and matting the ground. The terrain was extremely hilly and we alternated between scrambling up and sliding down, and the roots formed rickety stairways, spiralling around tree trunks, plugged with mud that you could perch on while you looked for your next bit of footing.

Vines seemed to plummet down from the canopies, twirling around like crazy cables, swaying but incredibly strong, and leafy creepers climbed any surface they could, be it huge boulders that we squeezed through or boughs of trees. Huge ants marched across our path, big butterflies flapped languidly through the still, sweltering air and we tramped on, up and down, marvelling at this strange new world. There was no one around for miles and it felt like we were the only people in the world.

Until we came across the orangutan. 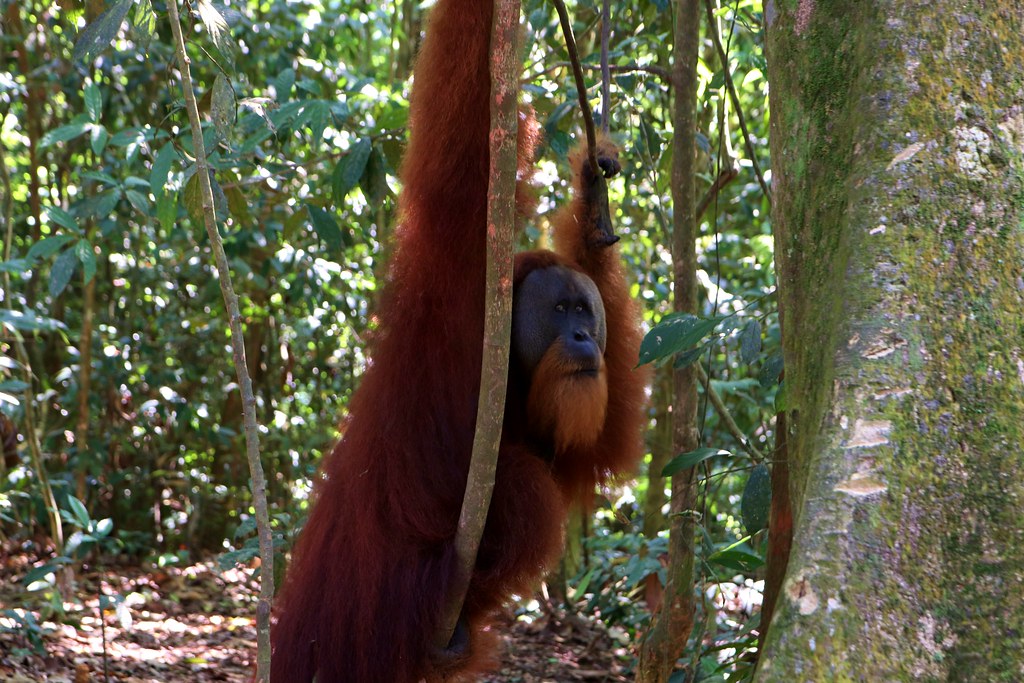 I couldn’t believe it: it was right in front of us, huge and larger than life, and we practically walked into it. For real.

Of course we didn’t: we backed away slowly as it ambled along, ignoring us perfectly. And as we did so, hoards of other trekkers seemed to pour out of the jungle in all directions, like rival factions who’ve all discovered the holy grail at the same time. There must have been about 15 of us congregating on the orangutan.

Supremely unconsciously, he lumbered along, completely unaware that he was the source of so much fascination. So we all wandered around after the orangutan for a bit, who performed and posed for us, stretching out those remarkably long arms. I was most struck by his INCREDIBLE fur: it was long and smooth, not matted or knotty like I would have expected, but glossy and groomed, practically sparkling whenever it was hit by a stray ray of sunlight. He occasionally strolled on his knuckles but he had a properly chill King Louis vibe, and was mostly swinging on vines and small trees, even when his feet were on the ground. I expect he just liked the sensation. 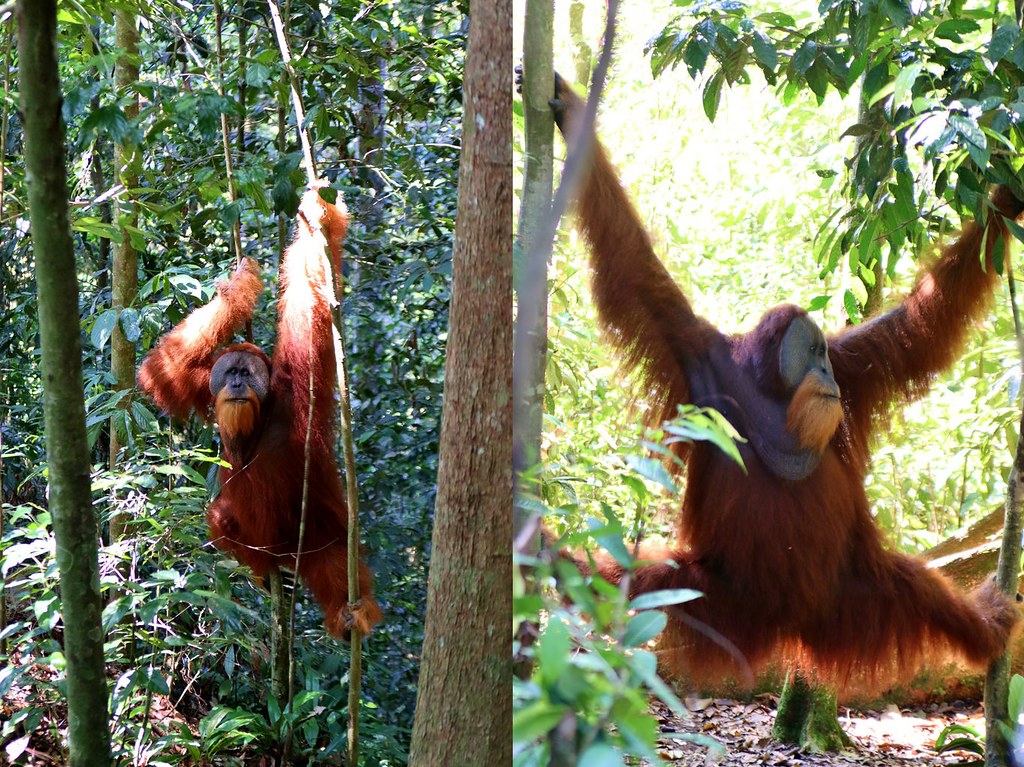 We were blown away by the experience. I don’t think either of us had really expected to see an orangutan, being drawn to Sumatra mainly for the trekking, but it was really something to spot this chap in the wild. 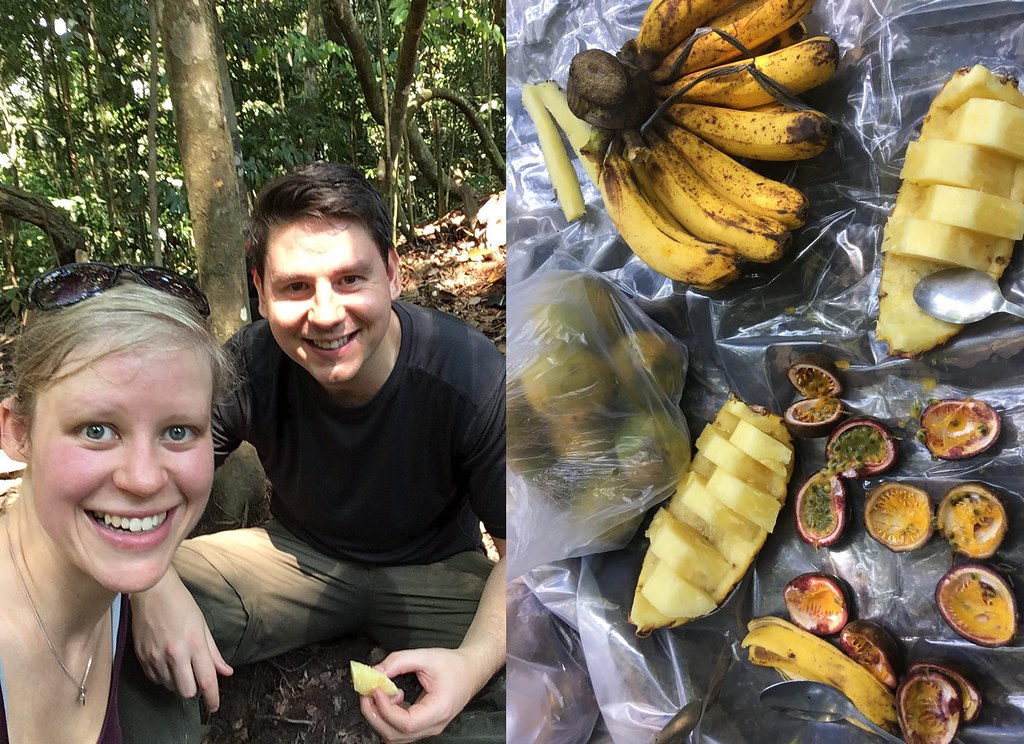 After all the excitement, it was time for a fruit break. (NB pre-break Face Status update: swampy) From inside his backpack, our guide produced insane numbers of passion fruit; it was almost comical. However, they were immediately followed by mandarins, an whole bunch of bananas and an entire pineapple, half of which our guide deftly sliced up and peeled while the other half disappeared back into the bag. We managed about half a dozen passion fruit, all the pineapple, a banana each and none of the mandarins. Our guide seemed a little disappointed in our efforts. It was a much needed source of hydration though, as I was already well into my day’s water supply. Post-break Face Status update: dry. Hurrah! I think my body had just leeched back in whatever water it could. Charming thought.

It was soon time to get trekking again and we began another climb: the longest and steepest so far. But we came out at a lovely viewpoint when we scaled the final ridge, and while it called for some climbing using both hands and feet, the panorama over the jungle was worth it.

I haven’t yet mentioned the noise of the jungle: it has its own wonderful, incessant, cacophonous music that is going all the time. It’s easy to sort of forget that it’s there as you grow accustomed to it, but I loved hearing the multitude of sounds, made all the more curious by the fact that you can’t see whatever birds or insects are chirruping and droning away at such high volume. Added to the almost pulsing humidity, it started to feel as though the very air was alive.

The climb had caused my face status update to shift from dry to moist to damp and into clammy. But we were enjoying ourselves too much to be really put off by this. And we set off again merrily on our way. 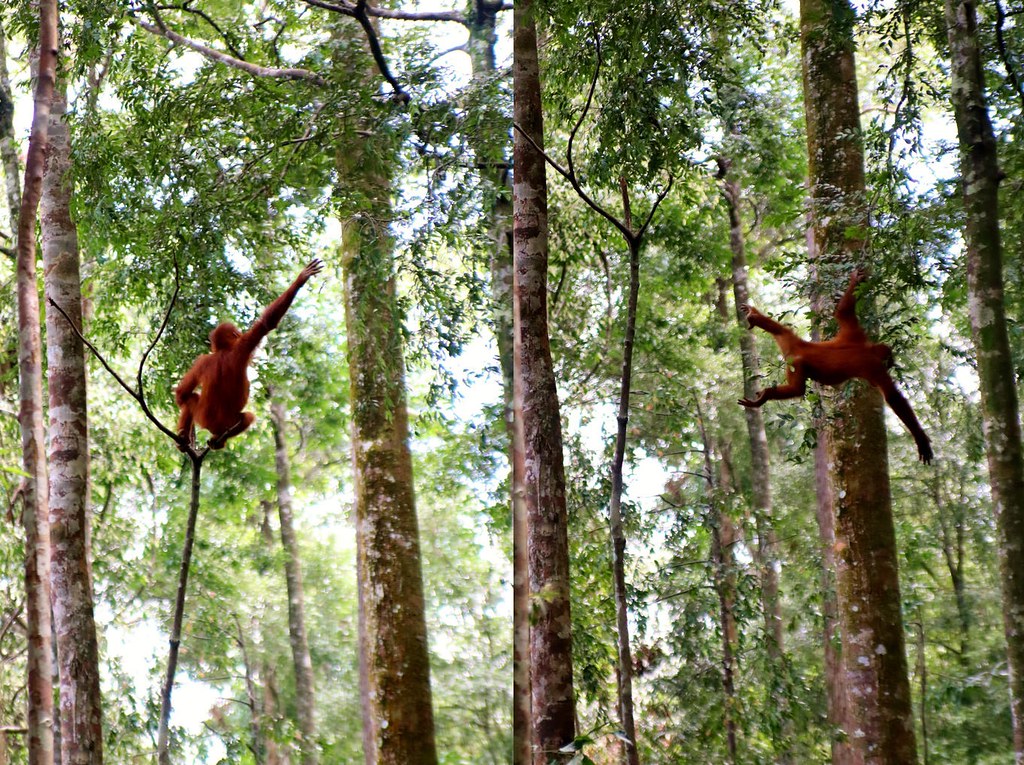 We hadn’t got very far before we happened across another orangutan, this time with a baby in tow. The little one was clearly trying to learn to climb independently and it was almost successful. It was entertaining to watch the attempts. 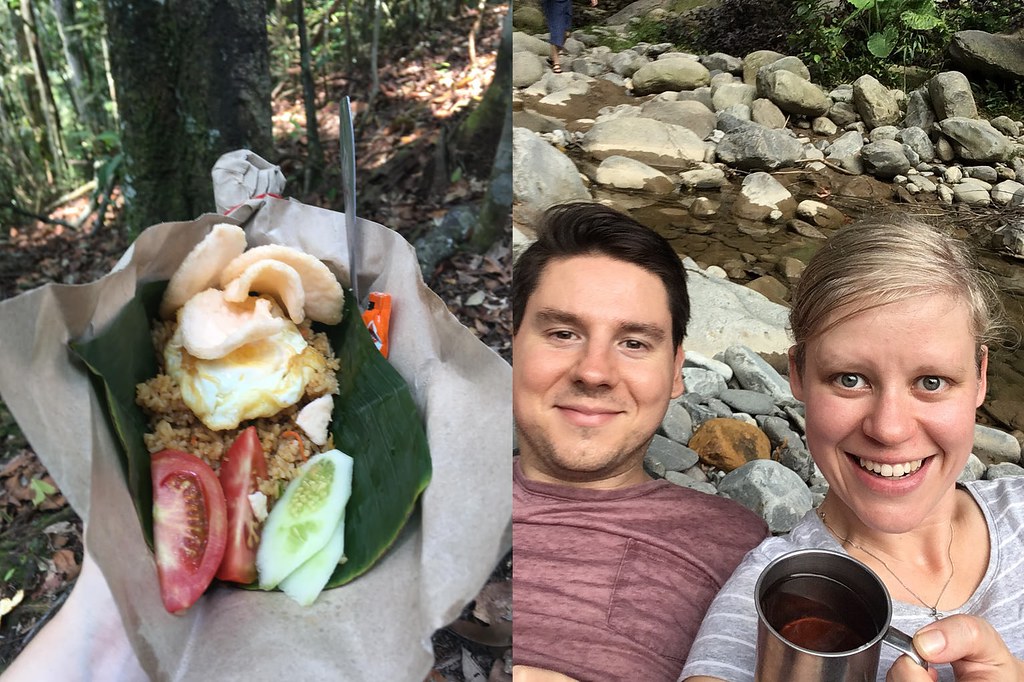 We trekked a little further, reaching the top of another hill and it was time for lunch. A number of other groups had also had the same idea and we dropped gratefully to the ground. Our guide again rummaged around in his bag and produced a quite improbably delicious meal: fried rice, a fried egg, prawn crackers, salad and chilli sauce, all wrapped inside a banana leaf. I was surprised to find how much rice it’s possible to pack into a banana leaf, and it was so delicious. We were also presented with the rest of the pineapple (although after our poor efforts the first time round, we were not offered any mandarins. Fair cop).

After lunch, we carried on with our trek. The up-and-down aspect reached new scales of ridiculous. I felt like a B-movie explorer, hauling on implausible tree roots to climb a mountain, and clinging to vines to descend a mudslide. And I am only slightly exaggerating. 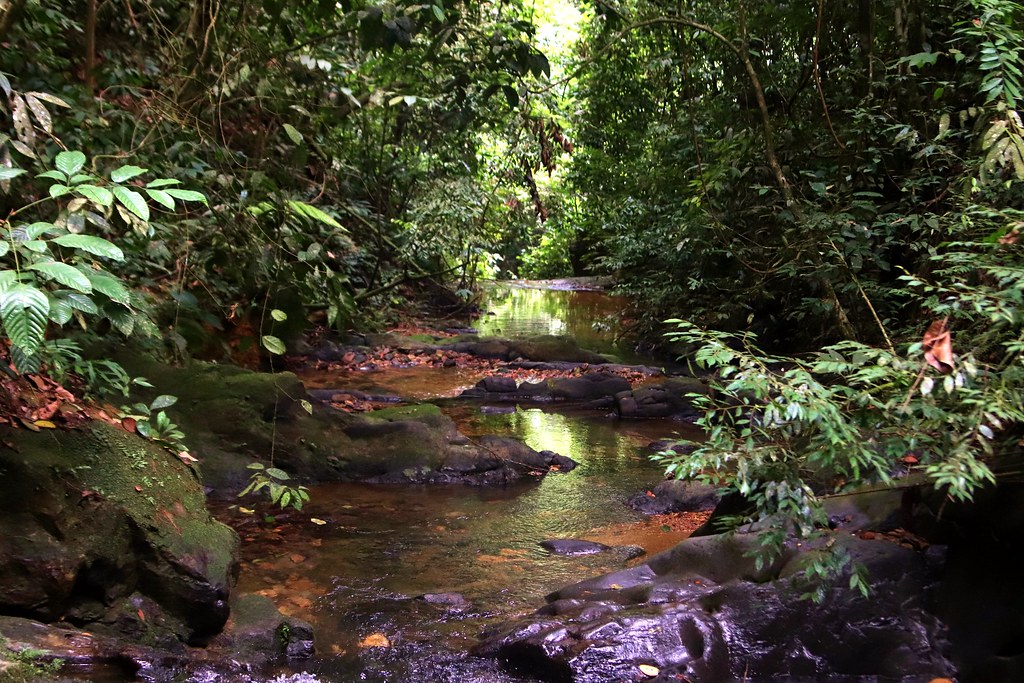 Slithering down a banking to a stream, we met another orangutan: this one was smart, known to the guides, and had a will-kidnap-tourists-for-bribes plan.

She swung out of the trees as I was taking a picture of the stream, and our guide cautioned us to stand back so that she wouldn’t hold our hands. Which seemed a little strange, but as a basic rule of life is “don’t mess with wild animals, especially when said animal is a loose bag of muscle that could tear your arm off” we followed his advice. He tried to shoo her away with a stick which she calmly took from him.

She swept past us, approached a group of trekkers who had skittered down the banking behind us and wrapped her hand gently but firmly around the wrist of one of their party. Holding his hand with her other hand she sat down and would not be persuaded to move. 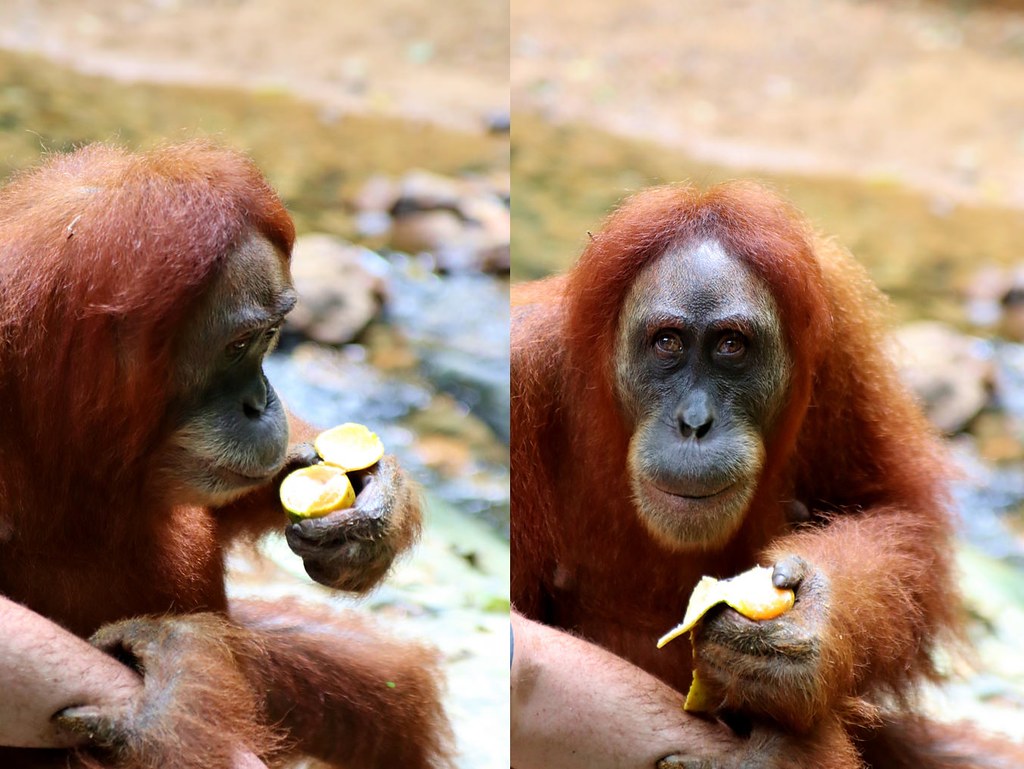 The guides told the captive guy to sit down too and explained that this is what she does. She holds someone hostage, in a non-aggressive way until they pay her off with fruit. She took and ate the first two mandarins offered but despite coaxing from the guides, refused to let go of her new friend. It took two more mandarins to persuade her to let go, along with the knowledge that she could hear the next group of trekkers start to make their descent and that she would soon have another ransom opportunity.

The guides joked that she was like the police: if you can pay the tax, you can go past. But if you don’t pay, you can’t go past. You have to pay your fruit.

It was amusing but we couldn’t help speculating on the intelligence of the animal. An orangutan who not only knows how to get fruit out of passing travellers, but knows to do so gently to ensure a continuing supply. An orangutan who can think through bargaining in the long term. I still find it astounding to see a creature capable of that level of thought.

Orangutan averted and our tax paid in mandarins (4 is the going rate apparently, but I’m not sure what that equates to in pineapple, or what the conversion rate is to passionfruit) we crossed the stream and began another energetic climb up a jungle mountain.

Our final stretch to the camp was a long downhill (ie vertical) slither, where I literally had to hang on to vines to keep my feet. While the climb down didn’t have the heart-pounding effect of going uphill, it was still tiring and sweaty work, but it was also wildly entertaining and we made it to the riverside.

Camp was another fantastic experience...but that's a story for another day.

P.S. You can find links to all the Indonesian adventures here.